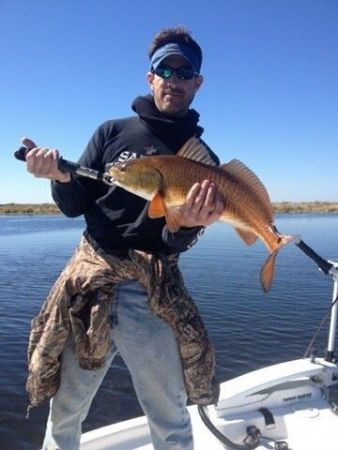 User Name
TurtleNO
Member Since
May 07, 2007 at 4:11pm
Age
6
Location
Jefferson, LA
Hunts For
Fish and ducks
Fishes For
Everything and anything that pulls my line
Organizations
Myself

This is getting old with the spam posts.

Paul, I was wondering if I can get local cards for the dragonfly. I'm about to purchase one without the navionics. Any information would be great! Thanks

Been lazy and just got around to editing the video last night.

I used to enjoy his reports. Anybody know him or know what he is up to now? I remember he was reclaiming old wood and turning it into furniture after Katrina and was an avid duck hunter.

RIP John Gremillion aka Holy Mackeral. You were a hell of a fisherman and will be truly missed.

Here is a video I shot yesterday on a great topwater bite for reds.

Anyone have any crabbing reports? Want to go crabbing with nets tomorrow for an afternoon boil.

I just went on the USGS site and saw that the pearl river water level is at 13.7 feet. Anybody think it will drop enough by Saturday to try and get a few crawfish or am I wasting my time and should look somewhere else?

Anyone else not enjoy the addition of the two new guys from N Louisiana on last weeks show? I like variety, but this is a stretch. Talking only bagging 13',14', or 15' gators. Cmon man. I wish hurricane Isaac hadn't of scratched trapper Joe from the show this year. Oh well, you can't stop mother nature.

This is a shot in the dark. On the way to breton sound marina early this morning my pirogue blew out of my boat. Looked for itwith no luck. If anyone sees it between chalmette and hopedale could you message me, thanks alot everyone. 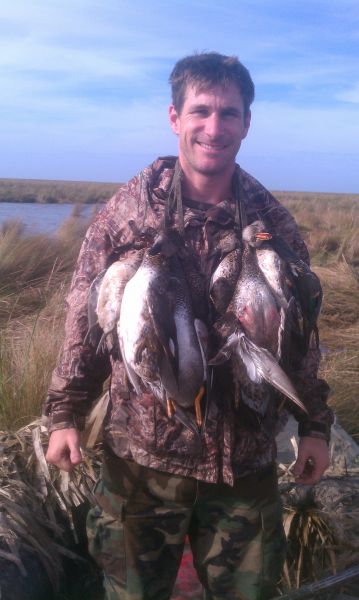 Hunted on a buddies lease sunday and smoked the birds. Had a problem though. On my third shot, nothing happened. Checked the gun and couldn't believe what I was seeing. The receiver cracked by the firing pin. Had to patiently wait for my buddy to shoot a limit before I got my turn. Frustrating watching ducks come in and your helpless. Pics attached. Can anyone recommend a good gunsmith who can fix it?

Can someone get this damn water out of the marsh. It is getting ridiculous. Decoys were drifting, greys were landing in the thousands of small holes. I may need to sell my go devil. A 32 foot gravois with triple 250 outboards could get to where I hunt. 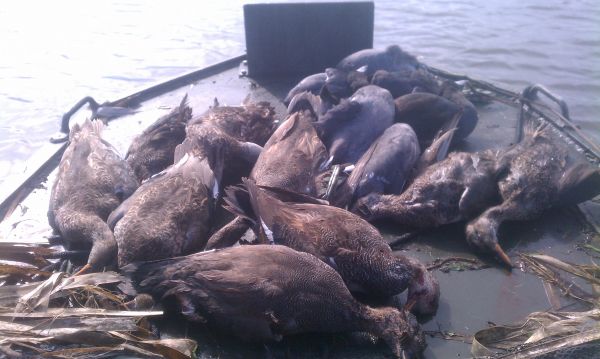 Hunted today with my buddy Johnny on his lease. The fog was thick. Birds didn't fly much this morning. We still got 10 birds and a few coot. We shot pretty good for a change. All greys and a single bluewing. 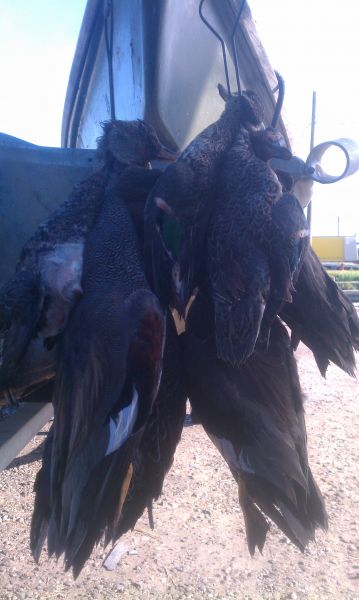 Had a good bag consisting of greys, teal, and one pintail. Heard someone in the distance doing mallard hen hail calls like he was hunting flooded timber or entering in a duck calling contest,lol. They will eventually learn. 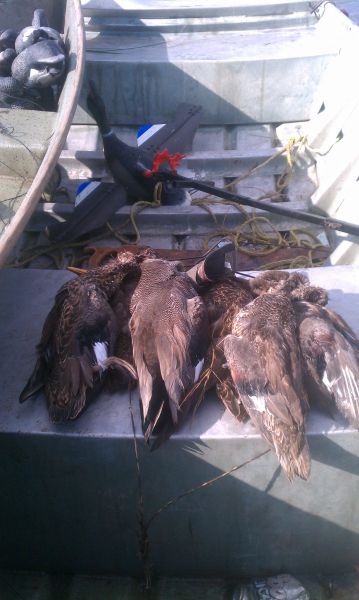 Hunted solo today. Birds weren't flying much early. Once the wind picked up at 7 it was on. Had flocks of 15-25 greys cupping in the dekes. Didn't have time to reload before the next flock came in. 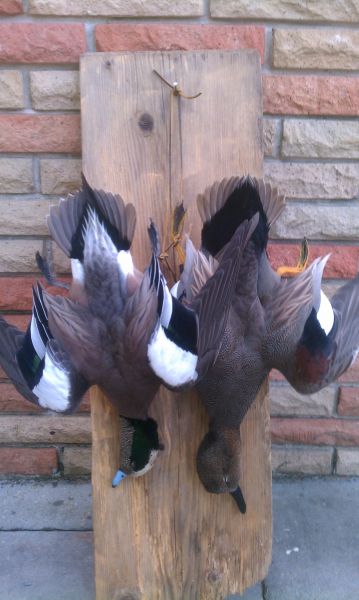 Mount I got back, what do you think?

Has anyone had a falcon rod break that they sent back for a replacement? Mine broke right where an eye meets casting. Went on the website and its going to cost $40 to ship it threre and to pay for the shipping back. I only payed $90 for the rod. Almost not worth sending back. 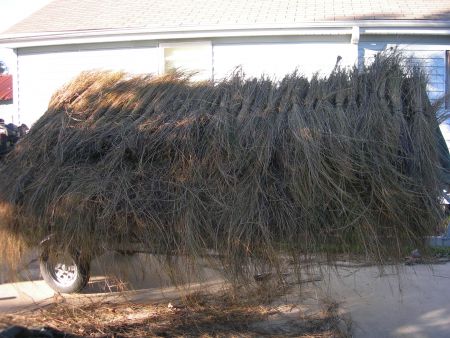 I finally worked on my new duck blind for the second split. I'm halfway done and thought I would post a few pics of it. As Gary Zeringue would say, 'Can I get a deck check with them ducks!' With the help of a couple buddies, we were able to build quicker than I thought. This blind makes fast grass blinds look like red headed step children.

Went hunting friday in the Biloxi WMA. A buddy bailed on me at the last minute so I went solo. I was excited because I knew that front was coming that morning. Man did it turn the ducks on. Shot a limit of greys. Hunted the same spot Saturday and only shot 3 ducks. 1 mottle, 1 grey, and 1 bufflehead. What a difference a day makes. I guess the front pushed the ducks out as quick as they came in. Buddies in Delacroix smoked the ducks Saturday so I hunted on their lease Sunday. Same thing happened to me, only 3 birds. That is why they call it hunting and not killing. Still had a great time. Gonna try again one last time this weekend before the split ends.

I was searching around on the internet and came across a pretty good do-it-yourself boat blind. The guy goes into very good detail and his boat came out real good. I believe it only cost him $300 to build it. Here is the link...

Question for guys that hunt with go-devils. Do you turn the shaft inside the boat when you assemble the blind or do you leave it outside the boat?

I find it interesting that the AG says there isn't enough evidence to prosecute when the BR DA is still investigating. Equipment wasn't accounted for, yet no evidence????? Please educate me AG on how there isn't any evidence. I'm dying to know.

I haven't heard anything.

Ron did y'all catch any fish?

I hope you took a pic of the vessels or remember the names of the boats and report them to the Coast Guard. That is absolutely PATHETIC.

I sent you a PM

In my opinion, flooding causes them to spread out and not be concentrated. I crawfish in the pearl and am waiting for the river to come down below 13 feet before I do well. Less water will concentrate them and they usually will get much bigger.

Demo, demo, demo. Can't stress that enough. I like a lighter kayak that tracks well, I can carry myself and is very stable. There are many good kayaks out there. Mine is a Jackson Coosa HD and I love it. Fish catching machine.

Yikes that's a lot of divers

Only thing with hitting Elmers is it's mostly females that you catch. In that second pic it looks like one of the females has berries (eggs). If so, that is a big no no.

Doesn't make sense. You own property that someone else built a camp on and you did nothing????

Go on the BCKFC.org and lafayettekayakfishing.com pages and post this.

Demo demo demo. Sounds like a broken record. Buddy just got a Jackson big rig. Sweet kayak. I have a Cuda '12. Take your time and research!

Weedless crawfish work well in that thick grass. Don't really need any weight on it either. I know a few guys will pitch a sluggo weedless to for redfish in thick grass and do well.

I agree with this! I've fish primarily in the Delacroix area. I've put in a lot of time and had quite a few bad trips and just as many great trips. Over time, I've patterned fish, logged trips, and am very confident that I'll catch fish. I am willing to help people, but not give them all my spots. I finish school in May and plan on getting my captains license this summer and will guide part time after that. Not to make a killing, but to make extra money and put smiles on others faces.

The Pearl has to get below 9 feet before it gets right.

What image software are you using in your first two pics??

Guide would be necessary if you don't have a boat. If you do, bring plenty fuel and run the traps from the Miss Sound into lake borgne. Live shrimp free lined, plastics under a cork, or even flies will catch them. Remember there is new restrictions on them. Good luck

Nice mess. I usually filet mine and fry them up. Next time I may scale a few and fry them up whole. Was going to try out there this weekend, but this front is going to mess everything up. Yesterday was the day to go, but I had to work.

Love the outdoors and respect it like my dad taught me. LA has the best fishing in the world!