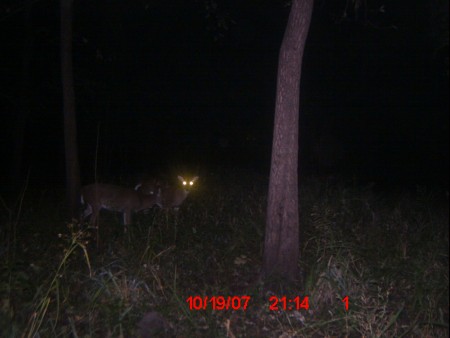 well fellas lookie here!!!! Here are a few pics of some bucks that I got on my cam. 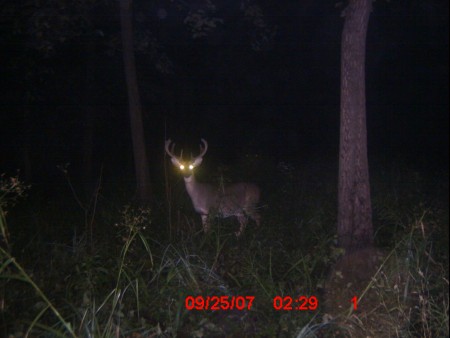 Well fellas went to the camp this weekend and hunted. Checked my camera and found their to be about 100 pics.
Saw a bunch of does that gave me some really good shots but being in area 6 I couldn't kill them. Well sure hope that I get a shot at one of these this weekend. Just thought that yall would like to see these. Good hunt,n everyone.

Five more days till (If I can quote the great doe slammer Himself) the shawdow of death arrives. Is anybody else firrrred upppp?????????

does anybody know the dates of the area 6 youth hunt weekend? or if they even are having one? want to take my 7 year old daughter this year.

Has anyone ever used Biologics HotSpot? And if so did the deer like It? I was thinking of planting this in a small
secluded area and mixing some full draw with it. Would like to hear yalls opinions
Thanks. 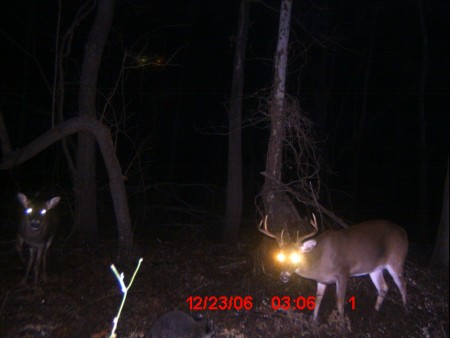 wonder how big he will be this year????
Hunted him hard this year just never saw him during the day.

I have just purchased the CVA optima pro and was just wanting to get some feed back on the gun. It sure feels good and balanced and looks to be well made. I understand that it is capable of shooting 150+yards. Is this true????

Am I wrong or is the mississippi river supposed to creast at 42 feet on the 21st?? I was also wondering if opening the bonecare will help the water level in morganza?

You have got to be kidding me!!!! Where is a cop when you need one?

That is a really good buck. Good Job!!!!
I am also an old river member. Nice deer for the Island.

October 08, 2007 at 9:06pm
A comment titled: Suprised in response to a report titled: LOOKIE HERE FELLAS

I am surprised at the pictures these camaras take.
I sure hope all the persimons aren't gone and fallen already
would like the shot at at least one of them.

not that good with pic posting yet. redid the post

Amen Dukie. I Can't wait to get The grease hot or the coals going.

September 28, 2007 at 8:18pm
A comment titled: Not every tree in response to a report titled: Deer&acorns

My dad and grandfather have always told me that just because a tree has acorns dose'nt mean that the deer will eat them. Same as a persimon tree. They prefer Acorns from certian trees. Why I do not know? I just know that where I hunt it is that way. Weather they are sweeter or healthier from tree I don't know. But I do know that they hit the same trees year after year. If anybody knows why this is so please tell me If this is BullS@#$ or not.

September 27, 2007 at 8:36pm
A comment titled: Nail on the head in response to a report titled: Ready to hear some Pop'n

You hit it right on the head there dax. There is nothing like the excitement and anticipation of opening day. Good luck to Everyone And Stay safe.

September 27, 2007 at 7:34pm
A comment titled: eat mosqitoes in response to a report titled: Ladybugs

Man if they eat mosquitoes let them be. Just kidding, We get those Pretty bad also. We usually set bug bombs off in the camp before we leave and they usually aren't as bad.

Now that is some funny @#$T. But you are problably right would have got a ticket.LMAO

September 26, 2007 at 10:47pm
A comment titled: Priceless in response to a report titled: First Fish

Man that picture is priceless.
way to go little man!!!!!!

September 26, 2007 at 10:37pm
A comment titled: Tekan II in response to a report titled: Rage broadheads

I had the same problem with the Tekan II. I have been looking for a good mechanical broadhead. I heard that the spitfire broadheads were good.

Thank you. I looked on the ldwf website but couldn't find it. Can't wait to let her kill her first deer.

bornkiller has not filled this section yet.