I just purchased some property. This property has several pieces of equipment that had been abandoned by the previous owners.Most of ther equipment is getting scrapped, but I plan to repair and use the cattle trailer.
Does anyone here have any experience getting something like this titled/registered in their name?

I am looking for someone to make some Maple Breakfast sausage in south Louisiana. Any help is appreciated.

Is this the same Ryan Young that is a charter captain that posts on here?

Agents were on patrol in Terrebonne Parish when they made contact with Ryan Young, 34. Agents found Young in possession of an untagged doe deer that he had harvested with his bow and arrow. Young was hunting in Area 6, which had a bucks only season with bow and arrows until Oct. 16.

Young was charged with taking an illegal deer during the open season, failing to comply with deer tagging regulations and illegal possession of marijuana.

In addition to the fines, Young faces civil restitution for the value of the illegally taken deer in the amount of $1624.61.

Agents involved in the case are Senior Agents Dean Aucoin and Stephen Rhodes.

I almost ran over a large dog on LA-20 today near Chacahoula. I picked him up to keep him from being hit. Please email me to identify and claim. bayouboy263atyahoodotcom

What reference point do ya'll use to check the tides at Wax Lake Outlet? 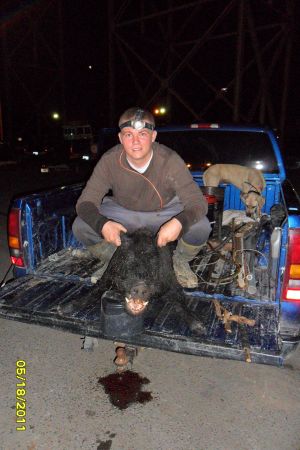 Here is a decent sized boar we caught the other night. 2 bay dogs 2 catch dogs This hog didn't run far once the dogs found him. He had fighting on his mind.

The collision between a crewboat, driven by Drew Lacaze of Gray, and an aluminum-hulled vessel, driven by Dwayne Crawford of Gibson, happened just before 4:15 p.m. near Partridge Bayou, the Louisiana Department of Wildlife and Fisheries said. Crawford sustained severe head injuries and was airlifted to Thibodaux Regional Medical Center. Lacaze sustained minor injuries.

Lt. Chad Hebert of Wildlife and Fisheries said Lacaze's crewboat was turning left when it collided with the front of Crawford's vessel. The crewboat is owned by Lynx Production Center of Houma. Crawford's vessel was found stuck in a marsh when authorities arrived.

Authorities are investigating, and no charges had been filed. Neither man was wearing a life vest when authorities arrived, agents said. Crawford remained at Thibodaux Regional Medical Center as this morning.

Is there a mobile version to view the reports? When viewing this site on my BlackBerry it takes forever to load.

Is there a way to 'subscribe' to a thread? By subscribe I mean to sign up for email notifications when a response to a thread has been posted.

Anybody know of an after hours notary in Thibodaux? I know there is a guy who lives on Parish Road, but I don't recall his name. Thanks for any help. 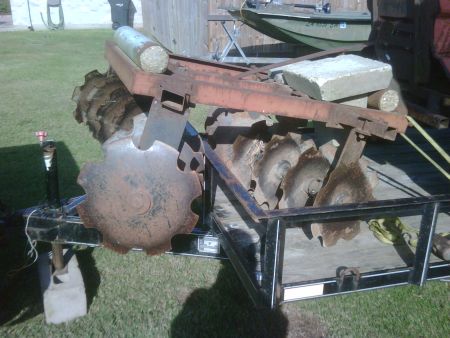 I need to get my tractor, bush hog, and choppers to the lease in one haul. Does this look like a bad idea? My trailer is only 16' long, and this was about the only idea I came up with. Any other ideas?

This is a pic of a gorilla coupler lock. Nothing is theif proof, but will definately slow someone down. They run $20-$40 depending on where you get them. These are a great investment. 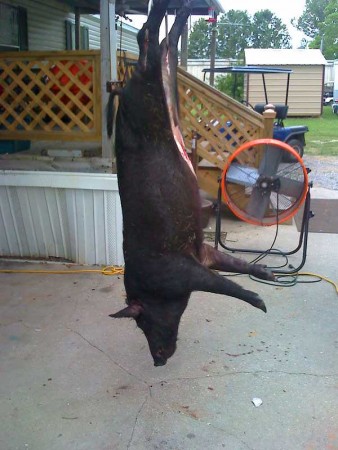 Another Boar trapped in the North Terrebonne area 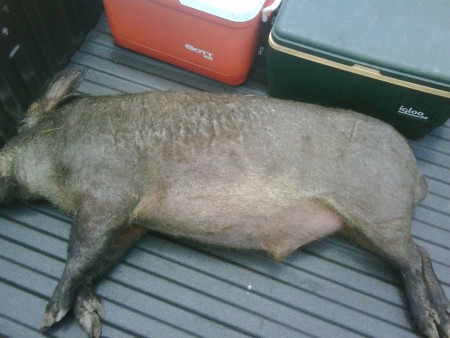 Caught this 280lb Boar in North Terrebonne. Thinking about a european Skull mount. Any suggestions or tips? 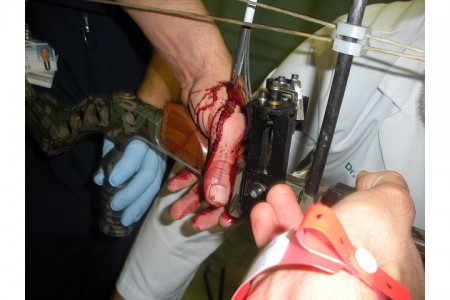 Shot a hole in my hand. Arrow went through my hand and into the handle of my bow. The people in the ER where pretty much amazed when I came in with the bow still attached to my hand by a carbon wrapped aluminum kabob. More details later.

Update Cullin is right. The arrow snapped into two pieces upon release. I watched the front half fly downrange and thought "man, that arrow flew funny." About that time I noticed it felt like the bowstring had slapped my hand. I look down and see the arrow in my hand.

The hand specialist told me that I hit the best place to have hit. The arrow went straight through my thumb bone. It did not hit any tendons or ligaments. I had surgery today to remove the bone fragments and pieces of carbon. The doctor did not have to put any screws or plates in my thumb.

What quiver are ya'll using for the rage 2? They keep opening in mine, so I am looking for something a little different.

Does anyone hunt Gibson/BayouBlack area? Have you seen any signs of Deer moving yet?

My relief just showed up at the plant and told me that there is a dead doe in the middle of the road. I went check her out. She is cold but not stiff. She doesn't look to be too tore up. I am wondering wether I should skin her out or not. What do ya'll think? What are the chances that it's not too late to get some sausage? 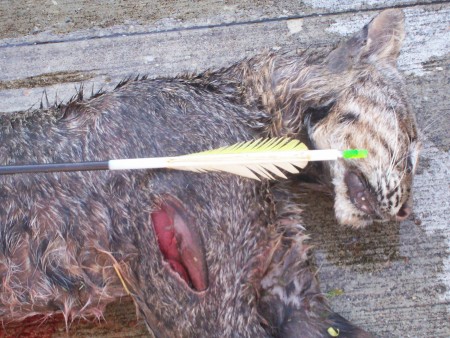 I shot this bobcat this morning at 30yds. He weighed about 25-30lbs. The rage 2 really did a number on him. Let's just say he didn't go too far. 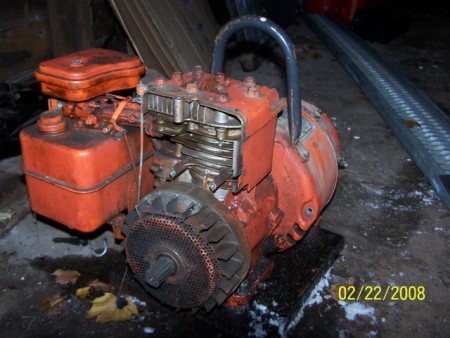 Here's the pic I tried to attach to your post

January 19, 2015 at 8:42am
A comment titled: Thanks in response to a report titled: Maple Breakfast Suasage

Thanks for the response. I have access to the grinder. I guess I just need to get a kit or recipe.

Where are you located? I have a black mouth cur that isn't working out as a hog dog. She is a sweet dog and would make a great pet inside or out. I have no doubt that she would be able to track a wounded deer.

In Houma I would go to the place on Barrow St. There are two shops in the same area. I have only dealt with the sheet metal shop on the West side of Barrow. I think the one I went to is called H&P sheet metal.

In Thibodaux I would go see Mickey Talbot. For more info on Mickey email me your number and I will call you.

December 28, 2012 at 6:36am
A comment titled: Date in response to a report titled: Houma man charged with deer violations

This happened Oct 11. Oct 17 is when the press release came out.

October 21, 2012 at 6:40pm
A comment titled: Chadabear in response to a report titled: 4 Wheeler Mechanic in BR

Gigs are legal to use. Check this link page 18 lower right corner section 'About taking frogs'

Thanks fellas. We made a trip out there Thursday made morning. We got there and back ok. Killed a few birds too.

Thank you Prooud Pop. That is a great post.

Can anyone tell me if they still sale live bait at the camp near Grand Pass? Does anyone have any contact info fothat place? If not where can I get some live bait on the way to jug's?

With all the water in the spillway hogs will be places they have never been before. If anyone needs help removing any, feel free to contact me through the email user button.

We went back out there Sat morning, and I saw a copperhead that was as big around as my forearm. That is when we called it a day.

I don't run deer dogs, but I don't want them banned. First deer dogs then deer hunting all together. What then? No rabbit hunting? What about ducks?

February 16, 2011 at 6:16am
A comment titled: LDWF Link in response to a report titled: Boating Accident

February 13, 2011 at 9:59pm
A comment titled: Thanks in response to a report titled: Question about the site

Glad to hear it Andy. Keep up the good work.

Thanks for the tip about the browser.

I believe that the dog hunters disturb the deer more than the dogs. If you can get the dogs in the woods and not the hunters you are way ahead of the game.

If you put enough pressure on the hogs with the dogs they start to avoid the area.

I run dogs. Get with me if I can ever help you out, or if you'd like to tag along to see how it all works.

Keep the trap portable and move it.

Keep the trap baited, but only set the trip every so often. That way the hogs are used to going in and out.

I can help. I could come to help set it up and to remove hogs. It is a bit of a drive so I couldn't just drive up there to check the trap.

Do you have a design in mind?

Please be sure to put some orange on the animal you are carrying out. I enjoy reading about your hunts and would hate for one to end with tragedy.

October 19, 2010 at 6:15am
A comment titled: thanks in response to a report titled: THIBODAUX NOTARY

Thanks Beast. That's who I ended up using.

September 24, 2010 at 7:44pm
A comment titled: STAND UP in response to a report titled: Thoughts on this

Thanks for the tip.

How did you stand them on end and lay them down?

I am thinking unhook the top link, lift the three point as high as possble, then use chain and binders to raise vertical. This would leave the blades facing the rear of the trailer.

2013 Tacoma Double cab in great shape. This truck is ready for the road or trail. 186,6** miles. Truck does have the towing package, back up camera, and sliding rear window. Located in thibodaux. (9eight5) SixEight8-8five2six $20,000 OBO Title in hand

hog bit has not filled this section yet.