Snake in response to a report titled:  MORE SNAKE PICS 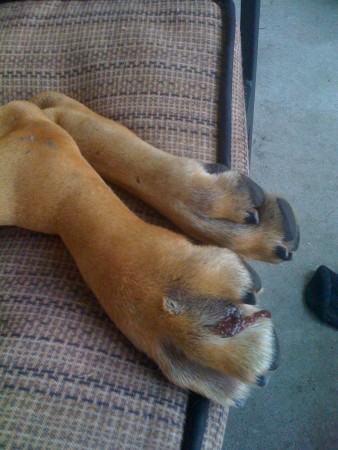 A few more pics, check the yard before you let the kids out to play. I never thought I would have to worry about my kids playing in thier own yard till this past Monday afternoon when the dogs found the first one, I thought just a fluke. When I killed two more the same week I knew I had a problem. 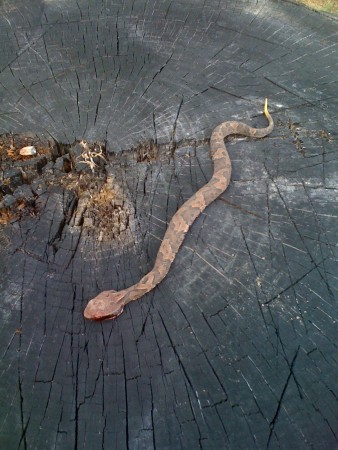 Can anyone tell me what kind of snake this is? I have killed three in my backyard this week. Unfortunately before I could get to the one today it bit my Boxer. Thanks 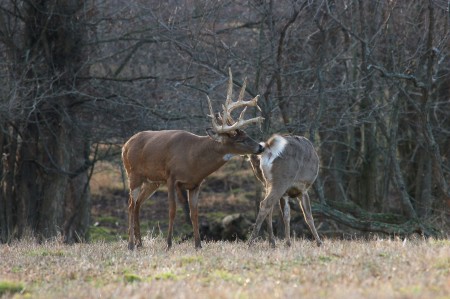 A few more good pics, I didnt think I needed to clarify these deer were not from Louisiana. These deer were photographed in Peru, Indiana. 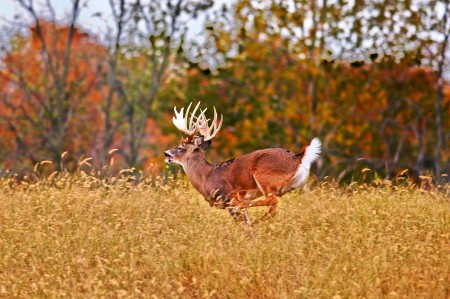 A couple of impressive racks 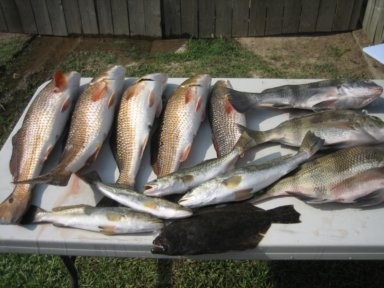 Gonna go and try to catch some specks tommorrow, any suggestions where to go in the Bayou Bienvenue area??

I live in Ravenwood Subdivision in Zachary, the dog is doing fine.

Thanks again for all the info. Yes I have killed three of these so far this week, and yes I am on a mission to find any others that may be around. In addition to the boxer Molly who is doing fine I also have a 2 year old son who is ready to get his back yard back... Thanks again, I knew I could count on my fellow sportsman. And for the folks who didn't see the other post the snakes were identified as juvenile water moccasins. Be on the look out-- I get a sick feeling everytime I think that my son could have been bitten instead of my Boxer.

Thanks for all the info, I brought it to LSU and they identified it as a COTTONMOUTH> Thanks Again and MOlly is doing fine, still a little swollen but up and around.
.

I caught one and have him in a jar to get a positive ID. Just never thought water moccasin because ther isn't any water around here, and all the ones I have seen were mature and much darker.

The Boxer (Molly) did go to the vet, she is on some antibiotics and Benadryl. The vet thinks she will be fine. The snake was about 12 inches long and she weighs about 60 lbs. Thanks for all the feedback.

I was pretty sure it was a Copperhead, I live in a subdivision in Zachary, never seen any snakes, much less a Copperhead and 3 so far this week. The vet gave us some antibiotics and said keep our fingers crossed, dogs usually pull through ok.

Went Tuesday, Bait Inc. had live croaker and live shrimp, caught a limit of reds and about a dozen trout.

June 05, 2008 at 7:32am
A comment titled: Bulk Plant in response to a report titled: Saturdays Catch

Thanks again for the info. I know where the bulk plant is now. I am going Friday so I will give it a try before I run out to the REDS!! Hopefully I will have some pics to post Sat.

Not really sure where the bulk plant is, email me some directions if you dont mind. I have really enjoyed fishing that area, about an hour closer than Golden Meadow where I usually fish. Thanks, Donnie

June 19, 2007 at 7:29am
A comment titled: Hot Water Canal in response to a report titled: Saturdays Catch

Thanks for the advice,, caught some small trout in the Hot Water Canal,, All the Reds were caught in the marsh ponds on the backside of Proctor Point. There were a bunch of boats out there Sat.

June 18, 2007 at 10:44am
A comment titled: Proctors Point in response to a report titled: Saturdays Catch

Fished the marsh ponds on the backside of Proctors Point, ""THE SECRET SPOON"" Gold 3/4 oz. was the ticket.

Thanks, I will let you know how we do. I just started fishing that area a few weeks ago and haven't had any luck with the trout,,, have caught some really nice reds in the ponds along MRGO. Thanks again.

SAMSON3227 has not filled this section yet.