Gary in response to a report titled:  Nice Trout 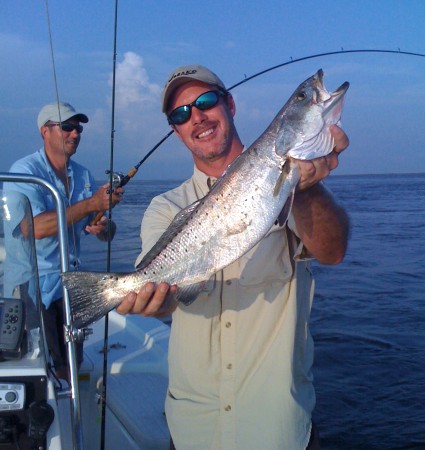 Went out yesterday afternoon to catch the falling tide with the hopes of catching a few nice specks. Went to T-Butte first with nothing going even though the water was beautiful. Thought we were a little early because not much tide happening.
Ran to the reefs just out of Southwest Pass and picked a few nice trout but nothing to get very excited about. Decided to go back to T-Butte because the tide was roaring out of the pass and figured they had to be on the reef with the great water and all. Nothing again.
Went back to the pass and fished till near dark. Boat next to us did much better with live shrimp. Came home with enough specks to make it a decent trip but boating this baby just before heading in made it a very nice trip. Just over 4.4#'s, she had me smiling from ear to ear for 10 minutes.
My cousin (CajunRC) brought a bigger one to the boat and we lost it at the net. Looked every bit of 6#'s....

Went out yesterday (6-26) mid-morning with the goal of getting to T-Butte just in time for the falling tide. Tide charts called for a good fall starting at 11AM and lasting until around 3PM. Well, we got there and the water was not moving at all and no fish were biting. We waited it out until about 1PM because we kept thinking the tide would start moving any minute but it didn't. We threw everything at them with no luck.
Start heading back to the pass to beat the rain in and see a few birds just outside of the pass and as we get closer see plenty of bait shrimp getting smashed on top of the water. We were able to pick up around ten 16"-18" specks before we lost them. Made it in to the point just before the nasty weather started. All in all an enjoyable day on the water.

Went to Vermillion Bay yesterday 3/15/05 even though we knew better but hey you gotta go to know right! Well, the weather man was dead on with the winds. Made it to Marsh Island for reds around 7:30 and could only find one of the two key ingredients to catching fish at each stop. The water was moving but so muddy that bait couldn't be seen 2 inches down in most places.
Rough day and even rougher crossing bay on the way in with cross wave action the whole way. First trip this year to the giant mud hole and it was nice to be on the water but it'll be another month or so before I head back out there. This time of year it's better to drive east or west if you live in the Lafayette area in my opinion.

Capt. Paul,
Tried e-mailing you this question last weekend and I'll try it here.
New Garmin 178C that I use a SD chip/memory stick pre loaded with blue chart. Can I download your Edge files to this chip directly from the e-mail using computer without cables, or do I need to get cables and download to GPS unit? There are two Edge locations that I want to get but want to make sure that it is compatible or will work with the SD chip.
Thanks

Glad to hear ya'll had fun Gary. I tried fishing some last week but the wind was whipping the island....
Tracy

Gary,
You catch any trout while on the island?
Hope you guys had a good time at the camp, I finished alot of improvements this week. Sorry it was after you went.
Tracy

April 22, 2009 at 6:52pm
A comment titled: Camp in response to a report titled: looking for beachside camp for rent in GI

Go to http://www.grandislerentalsolutions.com/
they have a large selection, mine is the Pepsi Camp for larger groups (5 bedrooms)but they some for each size......

Great job. It doesn't get any better than that.
BTW, where did you get live shrimp from near the mouth of the Avery canal?

It hurt a little but not as bad a pair of treble hooks to the head!

I must have shown that picture on my phone a dozen times this weekend to friends and family... Fishing should only get better out there as the summer wears on.
Tim, run in next time you pass the RC shop and tell Shannon hi, he is usually there or fishing....
I live in Youngsville and wouldn't mind sharing a trip with you to the bay...you got that Whaler right? Your boat or mine. Shot me an e-mail sometime.

Went out of the pass yesterday and talked to a couple of people at the dock who had caught some specks at Dry Reef. Water was nice when I passed by and saw a couple of boats there but did not investigate to see if they were catching.

July 19, 2008 at 4:12pm
A comment titled: Donate in response to a report titled: Fundraiser/Benefit Ideas or Help

Eric,
I'm another guy you have never met but would love to help out. Never fished the Lake but love reading your post everyday and feel like I've known you for the past year....
Anyway, I'd like to donate some things to help you out if you guys have a rodeo and raffle or auction some things off. Also, I'd fish the rodeo to support your cause.
Items that I could donate:

Weekend or 5 days during the week at Grand Isle beach front camp. Camp is the Pepsi Camp and sleeps 20.

Info can be found here. http://www.grandislerentalsolutions.com/ click on rentals then third row down is the pepsi camp.

E-mail me any details and look forward to helping out.
Good luck
Tracy

June 17, 2008 at 4:48pm
A comment titled: Great info... in response to a report titled: Web sight with Salinity for Vermilion Bay

Thanks for posting the site with the salinity info. I looked for it the other day and couldn't find it. I forgot to bookmark the page when you gave it to me the first time.
It seems like the river stage at Butte LaRose is falling so slow that it'll never get down enough to let the salt water into the bay.
Went on a quick trip to Marsh Island last week and got a few reds. Water a little to rough and time was a little to short to try to get to the outside blocks to get some specks. Hopefully it gets right soon and we can make a trip...
T

Another nice boat in that category to consider but cheaper would be the sea chaser 250lx.

Never fished out of the Everglades 243cc. It looks like it would have better big water capabilities but you never know. I'm not sure I like the deck layout for inshore fishing of it though. No front casting deck and all. Who knows, you have to spend some time on a boat to see if its right for you.
The 243cc is a beautiful boat though and unlike any other bay boat out there right now. Would love to try one out!

I'll go out with ya tomorrow morning. Catch some reds there are no specks in or around the Bay yet!!!
The hull looks alot my 07' Mako 2101. Mako and Kenner bay boats are basically the same now and I'm sure that the Kenners kept some of the hull design for the Blackjack when they sold out and then made some minor changes. I bet it rides good and dry. My main complaint about the Mako is the 15" draft. Blackjack states 12" approximate draft....
Thinking about selling the Mako for something better in the Marsh...Grass is always greener I suppose.

Jaw Breaker, how you like speck/red fishing with that T-Top. Do you find that it gets in the way of casting often or is not really an issue? I've never fished a bay boat with a T-Top and was just wondering if you like it.
Boat looks great BTW.

April 02, 2008 at 12:40pm
A comment titled: Thanks for the report in response to a report titled: vermillion bay

I was hoping you would have had better luck than I did last weekend.
I'm thinking mid to late April the Specks gonna start showing up on the rigs in the Eugene Island blocks and by early to mid May they will be on the reefs out of the pass. I know I'll be watching the weather closely for a calm day to make it offshore in mid April... There will be plenty of fresh water coming down from flooding up north of us for awhile that the wax lake outlet will dump into the bay. Once that settles down things should get better quick.

Specks by Todd Mason can be bought by clicking on the "outdoor store" banner on the left on this site. Again, very informative book.....

Agree with Country.
Todd Mason's Specks which can be bought on this website is a very valuable tool and covers the spawn very well. Must have read the first chapter about learning your prey a dozen times. Great information in there!

Fished the west side of the island and the worm on saturday. Good luck Thursday Credeur13 and let us know how you do.

The Pepsi camp sleeps around 19 and has a bunk room for the kids and two master bed rooms for the adults plus another bed room. Very nice place, has commercial ice maker, ping pong table and plasma tv, wireless internet etc etc...
It is on the beach and can be rented here:
http://www.c21gir.com/Home.html
go to rentals to see all the camps available.

March 11, 2008 at 2:17pm
A comment titled: Redfish and Trout in response to a report titled: College Student in Need of Help

You should get to know the Vermillion Bay area this summer. It is not very difficult to learn but can be difficult to consistently make good catches. The most important variable specific to the area is the Atchafalya River at Butte La Rose and it should be below 10 feet for optimal Speck fishing.
I typically launch from Cypermort Point and head to Marsh Island for reds and in summer try the reefs just offshore for Specks. These being Tee-Butte, Diamond Reef, Nikkel Reef (LDWF has GPS coordinates for Nikkel. The rigs offshore are very productive in the summer but I rarely make the trip in my 21 foot bay boat, that is just me. You can shot me an e-mail if you want to talk some more or possibly plan a trip together just to help you learn the area.

glasso has not filled this section yet.