Maurpas or pontchartrain for gar fish?

Maurpas or pontchartrain for gar fish?

Wanting to go try catch some gar for the fish time. What lake holds bigger and better fishing for gar? Any pointers or tips? Ive never fished for gar before.

I have a 2004 Evinrude fitch ram 150 that I need to put in the shop. not many shops deal with the fitch ram and had it worked on at two shops and never got it right. I was told there is a guy in the Gonzales area that is the best there is on these motors. can anyone from the area help me out?

is there any good bank fishing around avery island? im going to be out there for awhile with work and looking for a place to fish.

Anyone ever have any luck gigging flounder in grand isle this time of the yr? Ant places I can try?

When does shrimp season close? Did they set a date yet?

Looking to do some fishing around the trusses and causeway this weekend sometime. I'm coming from around baton rouge area. I'm wondering what's the best launch to use? Where can I get live shrimp? Thanks

What's everyone's favorite fishing string for salt water (reds/trout)? I've been using the Spyker wire braided but looking to make a change. I know it's a personal preference but would like to hear some other input 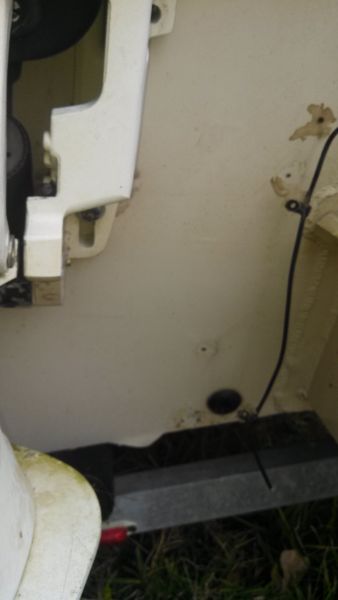 I bough a alum boat and wanting to put a GPS on it. On the transom there was a old transducer Mount that I removed. I read the instructions on the placement of the new transducer but don't really understand them. Should I put it in the same place as the old Mount I pulled off? The new mount is a little bigger and the screw holes wouldn't match up what would be the best way to plug the holes and not worry about a leak. Thanks for any input

i have a 2006 f-250 with the 6.0. I was going down the highway and the rpms would drop like truck lost power for a few seconds. it done this a few time then it just killed. will not start.

tested ficm has 48volts with key on and 48v when spinning over. good??

Hpop I did a air pressure test that I found on the internet by buying a adaptor to put air to the icp sensor. went up to 110psi and hear no air leak. can the pump still be bad?

any help or input would help at this point being that I am lost. or if anyone has a wrecked 6.0 that I can buy/borrow parts from just to try and run this down

Im new to the st.amnt area. I live a few miles from high school. Im looking for a bait shop in the area. Crickets, shinners and what not. Any help on launches for good perch and sac-a-lait fishing would help also thanks.

i have a a black lab that is about 1yr and 3mths old. he was one of the sweetest dogs ever. the last few mths he doesnt listen at all. he seems to be getting really aggresive and wild. he acts like he wants to bite new people(has never biten anyone). Before he would stay in the yard and come when we call him and now when we let him out he just runs from us and will leave the yard.

any help at all will help at this time. he and my son grew up together and are inseparable. so i really cant just give up and get rid of him if all possiable but i am scared he may hurt someone.

i was thinking a underground fence as far as keeping him in the yard. but hear they dont work with big dogs? but what could help with his aggresive and wild behaviour? he will be getting neutered this week and putting him in a training for basic training (sit,come).
Thanks David.

I have a small cut over behind my house that im gonna start hunting. Im gonna use my 12ga bc i feel my 7mm or .270 is a little loud for the area. The cut over is thick and about 150 or so yrds wide ( i know its to far for a shot gun). My gun has a imp cyl 2 3/4 barrel so my question is what shells should i use and how far is to far of a shot. Or should i just say f-it and use a rifle.

anyone know where i can get a farm raised hog. i want one cleaned and haired ready to roast. in in the baton rouge area. thanks

im new to deer hunting in the swamp. i hunted north MS all my life but lost the lease and with work mon-fri or sat it was more driving than hunting. Im looking for any help/tips and info on hunting/scouting for deer in the swamp.i will be hunting in Maurepas wma

anyone know if there is a gunsmith in the gonzales/ st. amant area? im new to the area and need a few minor things done. If you have seen one or know where one is please let me know thanks david

any suggestions on a place where i can bring my son on his first squirrel hunt that is some what dry so he wont have trouble walking. not looking for hot spots. i live in prairieville, la dont mind a little drive thanks david

any suggestions on where i can try to catch some frogs tom night. all i have is my pirouge being my boat is in the shop. im from laplace thanks david

is there any other catfish farms like catfish heaven closer to laplace. i want to bring my son fishing so he can catch a few fish thanks david

Are the fish biteing? Any certin bait or live? Thanks

Thanks guys. I'm gonna give it a shot once some of this weather clears up. Seems like every chance I get to do some fishing the rain screws it up.

How'd yall do? I'm heading out there tomorrow morning!

I got some today at rigolets bait and seafood.

I made mine also. I don't fine they work to well in a sandy bottom.

Your best bet is sandblasting it. The only problem is stopping or getting the sand out the double bottom. The only other option is wire wheeling the whole boat but would take some time and a lot of work. the factory does not prep to the steel as far as giving the paint a profile to stick to. With no profile it won't last. Give the surface a profile and use industrial epoxy primer and finish coat and will last longer than you will ever have to worry about.

thanks for the help, man i thought they would have a big bait/tackle shop around here somewhere. any pointer on some areas to try for catfish and perch. im not askig for hot spots just aras i can try andbring myson to catch his first fish. i do have a boat.

March 21, 2013 at 3:49pm
A comment titled: Thanks in response to a report titled: Deer hunting with a shot gun help

No need for the sorry, i like both i was just saying i never rly shoot the .270. I won it at a rafle and just rly never used it but not for any reason. My 7mm was already sighted so it was just easier to grab that. Will give me the chance to use and kill with the .270

December 22, 2012 at 10:57am
A comment titled: Thanks in response to a report titled: Deer hunting with a shot gun help

Yea i was thinking the same about the .270. I have shit the .270 this yr i rly just use the 7mm. Im gonna use the shot gun for the evening hunt this afternoon and try get around to shoot the .270 tom.

December 22, 2012 at 8:33am
A comment titled: Thanks in response to a report titled: Deer hunting with a shot gun help

There is about another 200yrds of hard woods then a road. Ill be hunting a climber pretty high so i can see. And behind my stand about 500yds is my house and two others. I only bow hunted this spot but its loaded with deer and there just not comeing close enough. Thanks for the help

December 22, 2012 at 8:04am
A comment titled: painting in response to a report titled: NEED PAINTING HELP

yes sandblasting would be your best bet. with the bed liner it doesnt have to be primed but if you sandblat it then it will last. any other questions just ask i can give u all the help i can.

November 28, 2012 at 8:48pm
A comment titled: painting in response to a report titled: boat painting

peeling is from the surface not preped right. it would be best to have it sandblasted. it would give the surface a profile for the coating to stick to. it would remove all the old paint on the boat that when you paint over the solvents will losen the paint and start peeling. haveing it blasted would be well woth it the paint will last along time this way. any other ? you have just ask ill be willing to give you advise. i do this for a living so i should be able to help a good bit

looking for one around 100lbs. do you sell them cleaned ready to roast? how much? how longnin advanced do i need to order?

March 25, 2011 at 12:03pm
A comment titled: thanks in response to a report titled: leeville/grandisle

thanks, we went out yesterday and did just as yall say fished real hard with only a few keepers

its not to bad there are dirt bike track and trails there also some mud pits to ride in. idk what kind of bike your rideing

i had matthews and high country and lately bought a martin and cant go wrong for the price. i had a high country spent twice the money on and the martin shot alot better for the money

how can you get tags? i hear you have to own land to get them.

About cant stop lovin it

cant stop lovin it has not filled this section yet.