Happy Thanksgiving to all!

Happy Thanksgiving to all!

May God fill your home with Joy and Love this Thanksgiving Day!

So Bass Pro is the proud new owner of Ranger Boats, Triton Boats and Stratos
http://www.baxterbulletin.com/story/news/local/2014/12/15/ranger-boats-agreement-bass-pro/20460221/

UPDATE: The 'Rodney Dangerfield' of the Sportsman writers limited out yesterday while fishing with Captain Jack Payne of Sweetwater marina, while the magazines esteemed editor fished yesterday also and STRUCK OUT. That means he caught zero, zip, nada, nix, nothing-at-all, goose egg, zilch.

Capt. Paul, my Garmin GPS is mounted into the console of my boat and is not removable. Is there a way to load your EDGE waypoints into it?
thanks

Information Request: I'd like to hear from some Pointe a la hache anglers about fishing that area for an article I'm writing for an upcoming issue of Louisiana Sportsman Magazine. I'd really appreciate any tips and advice on good areas to fish right now... you guys know the stuff we need: The WHERE and HOW to do it. Please e-mail me and if you don't mind, include your phone number in case I need more info. Thanks! Rusty Tardo Rustyhookz@aol.com

Does anyone know of any fishing guides operating out of Pointe a la Hache? Would like to contact someone to fish the area. Thanks
Rustyhookz@aol.com

Anyone know the condition or current status of the Lake Hermitage Marina? A current phone number???
Thanks!
RustyHookz@aol.com

Does anyone know of someone who does Rod repairs in the Metairie/Kenner area?
Thanks
RustyHookz@aol.com 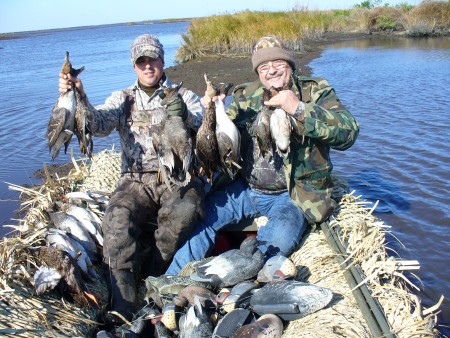 What a morning with Charter Captain and Champion Waterfowler Mike Herrmann! The ducks were moving in the stiff winds and 43 degree temperatures, and they kept wanting to land among our decoys. Pesky critters, we had to shoot them to shoo them away! The water back in the ponds is almost mud but the Go-Devil chewed it up and pushed us through. We had our 18 bird limit by 9AM, and would have had it sooner if the rest of us shot better. The tally: 2 pintails, five grays, four or five mottled and the rest green wing teal. A great morning in the ponds!

Dig out that old photo of the Wreck, the Black Tanks, the Dope Boat or BattleDore Reef for possible publication in an upcoming issue of Louisiana Sportsman Magazine. We'll share your shots with our readers and return your photos intact!
If you have such a photo, please call me at (504)722-8390 (cell); or you can contact me via e-mail : RustyHookz@aol.com
Thanks!
Rusty Tardo

I need your old photos of the Wreck, The Black Tanks, the Dope Boat or Battledore Reef for possible publication in an upcoming issue of Louisiana Sportsman Magazine.
If you have such a photo, please call me at (504)279-8116, or e-mail me: RustyHookz@aol.com
Thanks!
Rusty Tardo

There are pros and cons to both aluminum and fiberglass, but after 40 years of fishing out of both, I'd go with fiberglass hands down. Aluminum is a perfect second boat, but if you are going to be a one boat angler, a fiberglass bay boat will be more versatile in different waters and conditions. My 2 cents

November 30, 2014 at 6:29pm
A comment titled: Bienvenue Locks in response to a report titled: Y'all ever paddle to Chalmette Wall?

The Locks are supposedly to remain open from today (Wednesday, Nov.26) through Sunday the 30th, and then closures resume on Monday Dec. 1.
I wholeheartedly agree - DO NOT attempt to go through the locks in a yak. Good way to die

November 26, 2014 at 7:14am
A comment titled: Eddie Pinto's Marina in response to a report titled: Paris Road Boat Launch

Pip's is closed, but a few die-hards still like to launch there. The backdown is very steep and in poor shape so I don't recommend it. Go a mile past it to Breton Sound Marina

October 06, 2014 at 11:51am
A comment titled: Chandeleurs in response to a report titled: chandelier islands

Trout action has been slow.... very slow. Reds over the grass beds and in the surf. A few big specks in the surf

September 04, 2014 at 8:21am
A comment titled: your boat in response to a report titled: Rigolets Trout!

March 31, 2013 at 7:12am
A comment titled: suggestion in response to a report titled: Suzuki 4 stroke problem

I suggest you take it to a professional. A jerry-rig repair might make matters worse. I've been dealing with Gabe at Advanced Marine in Kenner if you need a recommendation (504)458-0076

May 15, 2010 at 5:49pm
A comment titled: weighted hooks in response to a report titled: Berkley Gulp Shrimp

H&H makes a weighted hook that is perfect for the Gulp shrimp lures........ fish it 2-3 feet under a popping cork
IT WORKS!

July 07, 2007 at 2:02pm
A comment titled: OK, count me in! in response to a report titled: FISHING TO HEAR RODEO FUNDRAISER-BUY TICKETS NOW

Sent in my donation for young Kyle via PayPal, but more importantly will send up my prayers for this fine young boy. God's blessings to him and the Couvillion family.
Rusty Tardo

April 05, 2007 at 9:50am
A comment titled: be sure to post a report in response to a report titled: causeway fishing any luck

and let us know how you did at the Causeway. Kinda anxious to get out there myself

I'll keep our old friend Redbone and his family in our prayers for comfort, grace and peace during these trying days....
Rusty Tardo

September 25, 2006 at 5:47pm
A comment titled: RustyHookz in response to a report titled: Midnight Lump

You would be taking quite a risk to fish the Lump in any Bay Boat. They call them 'Bay' boats for a reason! They're great for the lakes and bays, but they're just not designed for the kind of seas you will face in the open gulf. And the gulf is very fickle this time of year. You'll be anchoring in 200 feet of water, so most skippers have at least 600 feet of anchor line. Three to four foot seas are commonplace, and five and six foot seas can occur quickly. My advice: fish the Lump in a deep V or Cat.... and be safe!

February 04, 2005 at 7:58pm
A comment titled: response to rou in response to a report titled: Where are the specks

There was a good article in the Times Picayune Friday or Saturday on fishing off the bank in Reggio. I know they do catch trout, bass and occasional reds right off the side of the road, and in the back of the marina. Ask Mr Harold at the Reggio Marina where to fish off the bank. He's very friendly and he does it successfully all the time. Winter is also a great time to fish off the bank at the Myrtle Grove Marina. Wait until a cold front blows down hard and cold, and then go fishing. It'll cost you $10. per person to fish off the bank, but sometimes the fish are really stacked up in there.

RustyHookz has not filled this section yet.