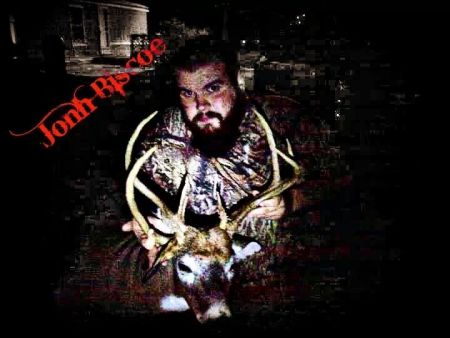 few from tonight..... in response to a report titled:  Good night on False river 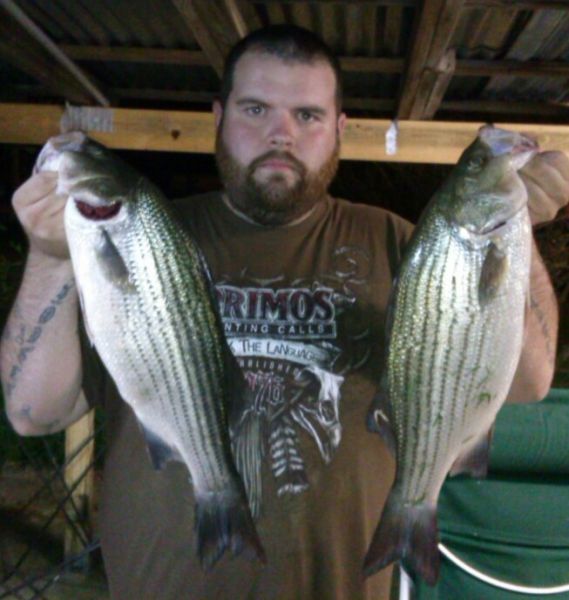 Put a few jugs out while we went bass fishing some docks. Caught four good sized stripers. Which is a nice reminder of home for me. Mini versions of what we catch,but was fun on light tackle. Did catch a 4ft gar on one jug.

Took the family on a little juggin trip bout 1/2 mile from ramah boat ramp. Boys were fussin so we packed it in. Got over to the levee where the truck was parked in the cow pasture. My wife was twenty feet from the truck with our youngest son while I was back at the boat thirty yards away with our other son getting the canoe ready to load up. It sounded like a fan boat comin out of the cove we came out of as it got louder I saw it. Just like something you'd see in the movies, a cloud of what looked like honey bees stretched from across the river to me up to my wife at the truck maybe 100 feet wide. It was a panic to get in truck by the time we got the windows up they lost interest and moved on. I got 7 stings in back to my neck wife got two or three on her hands and luckily boys didnt get hit. Never in all my years in the woods have I seen bees go to such effort to chase you and in such numbers. Figured I'd share y'all keep an eye out.

New to Louisiana, call me old fashioned but I want maps! and lots of em. I love sitting in kitchen with atlas/river maps and laptop reading fishin reports,and google mapping the river to compare the maps and making doodles. I am having a heck of a time finding maps of rivers,depth charts and such. Im lookin for Mississippi river,Red river,Atchafalaya river. All I have now is a Delorme atlas/gazetteer. Thanks 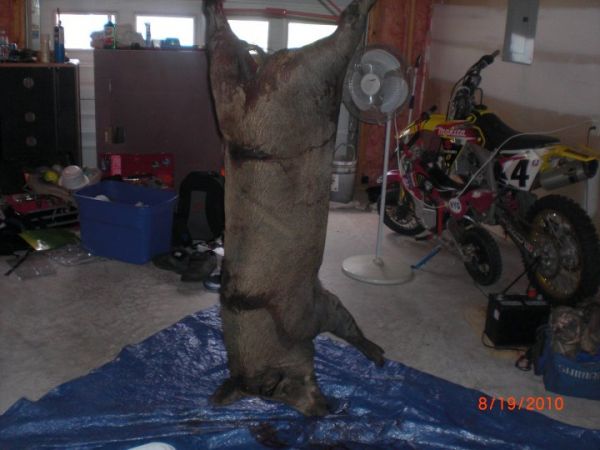 does this wma allow squirrel hunting? if so is hog in as well? pearl river is 3.5 hr away and I have the sickness! please someone holler back so I can get me some pork.

ive been told of old river for good gar for bowfising and crappie. never for cats. I will try. Id have to look up piere part. how far. as for the lake I will def look into it. soon as boat gets back from shop its on!!! Back home I used no more than 30 jugs,with live spot,mudshad,ly caught bluecats,cownose rays,rockfish(stripers) blue fish,and snakeheads. how does live line brehm work for yalls cats?

I just moved to the area from Maryland. I live in jarreau, on the false river. After a dozen nights of juggin this crowded lake, I have concluded other than brehm, its a waste of space. Where can a man go to get on Big cats? My biggest excitement of moving here was the duck hunting,and monster cats ive read about my entire life. I don't need detailed spots,just bodys of water. thanks a lot.

Hey guys. Packing for our move to Louisiana as we speak! I have a 17' fiberglass bay built ,with 25hp Johnson. This setup has been awesome for me for years fishing and waterfowl hunting here in Maryland but I'm worried it ain't going to work in the small runs coves and swamps that I am guessing are right shallow. I don't really have funds for a entire new rig time being, yall Reakon I can get by?

What's laws on sale of cats? Pointe coupee parish area. New to area lookin for links and or some info thanks. No nets just trotline/juggin. Can do it here in Maryland with non commercial license. thanks

How y'all doin? Like title says I'm new to area. Comin from Southern Maryland I haven't a clue what to expect hunting/fish in wise. I comp duck call here and in Georgia where I use to live,big on waterfowl, deer,and love pig hunting and turkey hunting as well. Just got out of coonhunting which I have been coin since I was big enough to carry the lights a dog Leeds. I'm not ask in for tips just how over run are yalls wma's? If there is game I do my own scoutin on birds and game. I have already figured the quality of deer genetics ain't in south from living in Georgia. But I'm not all bout that. Main WMA is the atchafalaya we are moving to jarreau. Can a man get out and hunt without running into 20 folks a day? Thanks a lot y'all.

bite is slow but if ya keep on em. they are down deep,just look for the bait balls.

as for the land next to ferry ramp, it was gated off and signs on it.

May 19, 2014 at 5:46pm
A comment titled: stripers in response to a report titled: Good night on False river

I just moved here three months ago from Maryland. but I used medium sized chrome rattle trap with blue back.

went scout in and found both ferry road ramps and saw bayou Sara. Try and hit it this weekend.

I was loockin at map and looks like fastest way to bayou sara, where I wanna try is if I put in old ferry road and shoot acroos river to st francisville side. I don't ever see any bouts out there, is it safe or better off driving 30 minutes and finding a boat launch on other side.

I ain't really got interest in those. I lived mouth of Chesapeake most my life catching 40-50lbs stripers regularly. Big drum,and shark. When we decided to come here I thought hogs,redfish,crappie.. ..and HUGE SLOPPY CATS.lol I was excited for that.

Yessir. I've been in bad spots before on the water during duck season back home in Maryland, where I honestly thought we were going to have to call for help. I promised myself I wouldn't intentionally put myself in that position again. My boat ain't really weight/ power ready for that current. Fish ain't worth dieing.

The last jug I pulled was tangled in a dead tree that ran up to the bank. When I yankin the line it was moving the tree a good bit. I'm thinkin maybe they was in the tree. But I'm glad they didn't catch us in the boat. As far as regular honey bees I don't know. Growing up I had a lot of hollow trees with hives. And if ya fooled with em they might follow you ten feet but loose interest. Maybe just a flook but was definitely a sketchy deal having the youngins out there.

I believe I messaged u my number brother. Hit me up some time we can look for some wild bacon and catch a few fish.

Yea I'd go out and bottom fish on the Mississippi. But I'm not gonna lie that river scares the heck outta me.

so what I been calling Atchafalaya wma is actually the refuge just below shreburne wma. ive crawfished at night and herd a lot f pigs and yotes in there. I just need to call. I appreciate the help. I will let you know if I ever make it out there

coming from the rehma boat ramp there is two small islands sticking out of water. about 300 yards past them is a small creek, we went down there other night and bout got sank by all the jumpin fish. Christ on a cracker gotta watch them things.

good job guys! by the way yall are killing me with these pis,im waiting on getting my rig back from mechanic. be out there soon.

sorry for delayed response. but thank you guys. I will look into all of the sources. Try and keep this yankee from being the next lost episode or somthin.

I will just have to call Monday,the online has zero info. I wish it would break down every wma separate with regs on season. pearl river is 3.5 hrs away I cant invest a 6 hr day of drivin for a blind hunt.

you talkin bout the little river that goes parallel to the levi? I never leave my jugs, if its slow enough to leave em sit for anytime, it aint worth stayin for. Normally back home in maryland by the time I put them all, out ive got two or three hooked.

posted reply in wrong place.lol
will look into lake and try and find perre part. as for old river ive been told place to go for bowfshing gar and decent crappie.but never herd of good cat. back home I live line bait fish and caught rockfish,snakehead,cownose,bluecats,and bluefish. how do yall do using lie brehm?

Ya I have a two man canoe extra wide (cause I'm a Biggin) lol I use now for layout/sneak boat for duck hunt in in beaver ponds.

Born in Fairbanks alaska ,moved to Bushwood MD when I was three. Got into coonhuntin and dabbled in bout every other kind of hunting. Moved to Georgia then got hooked on turkey and hogs and that's where I started competition duck calling. Moving to jarreau Louisiana on account wife got good job offer.