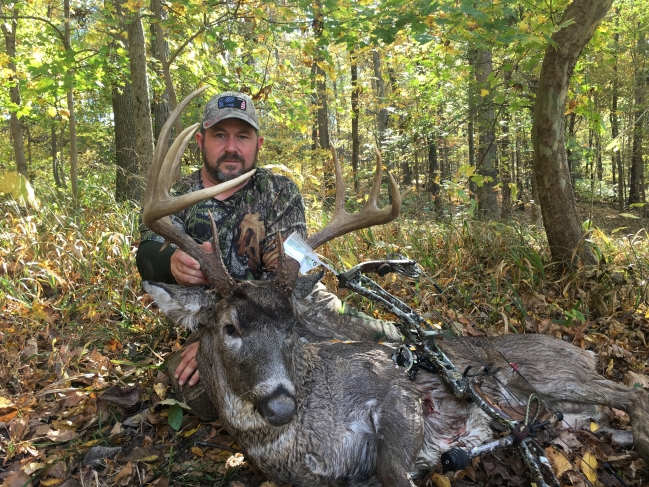 Hung my stand about 11:00 am between a creek and a soybean field that I could see in. About 2:00 that afternoon I arrived and saw that they were cutting soybean right next to the woods i hung my stand in. I made my way to my stand and decided to move it. Well I knew there was a ridge the deer walked along a slough but that was private land I couldn't hunt it but I figured the deer would walk that ridge and come through a narrow, triangle shape piece of woods that was public land prior to going to the field to feed. Well the tree I picked out had those big green briars all around it and about 10' high. I pulled out my little pack saw and started swinging, cutting, sweating and maybe a little cussing. It was hot that day in Illinois. I finally got the briars cut and climbed the tree. Got set up and hung my bow. I pulled my ranger finder out of my safety harness pockets and drop it. Well I was just starting to cool of from all the sweating so I decided I wasn't climbing down to get it. What are the chances of me seeing anything after the commotion I just caused. Well I texted my hunting buddy and told him where I was he was about a mile from me on some more public land. It was 4:00 by this time. Well I hear something to my right and a little behind me and I look and I though I saw something move by a tree that had fallen over about 60 yard to my right, I figured it was a squirrel running on the fallen tree. A few minutes later I look back to that area and see a big doe. I grabbed my bow and stood up and turned around in the stand hoping she would come close enough to get a shot and then I could concentrate on bucks. Well she turned towards me and began browsing and getting closer she finally turns broad side and is behind some tress with vines in them and I have no shot. Well I look ahead of her and see another tree that has fallen and if she follows the path she is on she will give me a clear shot when she steps over the tree. I guesstimated the fallen tree at 20 since I had no range finder because it had fallen out the tree earlier. We she steps over he fallen tree and I come to full draw only to pick up movement in my right peripheral vision. I glance to the right and there is the biggest deer of my life standing there at 60 yards taking what looks to be the same path at the doe. Well he makes his way and when he decides to turn broadside it in the same spot the doe did , behind the tree with the vines. It seemed like 45 minutes he stood there scraping the ground and rubbing small saplings. It was actually only a few minutes. He finally started walking the fallen tree that the doe had step-over when he did I was at full draw and let the Grim Reaper eat!!! I watched the Nocturnal attached to my arrow fly and impacted my deer. I ended up tracking him a half mile that evening through the woods until his blood trailed ended where he entered the freshly cut soybean field. Well we all know how that night went. No sleep. When back next morning and I crossed the field back to the woods on the other side and picked up. Looks again, he was dead in the creek. Found him in about 7 minutes from picking up blood again. Waiting to get deer from Taxidermist so I can finally get him scored.

sstagg has not filled this section yet.