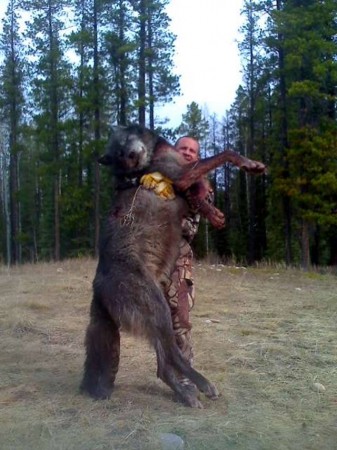 I receive this email today. This would scare the $_it out of me walking to or from your deer stand in the dark.

This Wolf was shot recently in Drayton Valley, Albertaâ¦.which is near Edmonton about 3 hours North of Calgary. The wolf weighs over 230lbs smashing the previous record of 175lbs. Wouldnât want to run into this puppy in the woods.

Apparently a bear hunter witnessed this wolf chase off a big black bear at his baiting stationâ¦!

Does anyone know where I can get bulk corn around the ST. Francisville area? 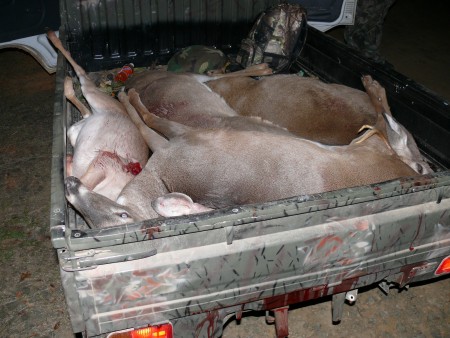 I have one and it is prefect for work details. Cold rainy mornings it is the ticket. It is a rough ride and if you a tall person you will tight in the drivers seat around the knee area. if i may suggest there are some items that i would have gotten on mine when i bought it. Locking differential and axle lock for the rear wheel. i bought mine at the place in Branch. one other bad thing is that some of the other members will want to bum a ride on those cold morning..LOL

January 07, 2010 at 8:19pm
A comment titled: NO to Rossi in response to a report titled: dead deer,gun ques and age ques

Stay away from the Rossi. They shoot all over the place. My wife shoots a H&R .243 and they are some accurate rifle's.

I have a 60 Yamaha also and it was doing the same thing when idling or waiting to load at the boat ramp. I had to change the water bump. I heard that when the alarm goes off it shuts down a cylinder and that what causes the shaking.
As far as the not starting can not help you there.

Nothing bad to say about mine. I have a 7MM with a Zeiss scope. Excellent shooting gun.

You will have to get some counceling for these deer.

looks like ya'll had a blast. Where did ya'll catch them? ME and my boys went to Chicot on Saturday but no luck.

The smile says it all. Great Job and Good Luck the rest of the year.

November 13, 2007 at 2:53pm
A comment titled: gonehunting in response to a report titled: Great Opening Weekend

Second Hand Trucks in Branch, Look up cajunminitrucks.com they have the picture and price

November 13, 2007 at 12:07pm
A comment titled: gonehunting in response to a report titled: Great Opening Weekend

Yes it is. So far I like it, only thing I would do different is get one with differental lock on the rear end but as for the four wheel drive it has got me thru anything I wanted to go thru. really will like when it is cold and raining going to the stand.

November 13, 2007 at 8:48am
A comment titled: Great Job in response to a report titled: NICHOLAS'S FIRST DEER

Great Job Nicholas. Good Luck the rest of the season.

Great Job little man, I think he is hooked for life.

November 12, 2007 at 7:43pm
A comment titled: Hunting Room in response to a report titled: MYSPACE FISHING AND HUNTING FRIENDS ADDRESS

For all you guy's that like the myspace thing, ya'll need to check out "myhuntingroom.com". it is a like a myspace for outdoorsmen.

Buck621 has not filled this section yet.