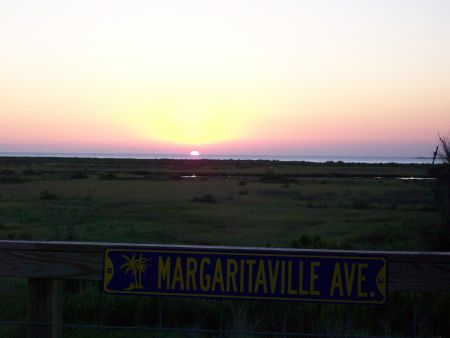 User Name
CROAKER-CHOKER
Member Since
November 03, 2007 at 8:33am
Age
59
Location
scott, la
Hunts For
N/A
Fishes For
anything that bites fresh or salt water
Organizations
N/A

going to grand isle this weekend

going to grand isle this weekend

a/c in our camp is acting up. the only guy we ever used is al's a/c he's recovering from surgery and can't work for a couple weeks. need some else that does a/c work in grand isle. thanks for any help you can give 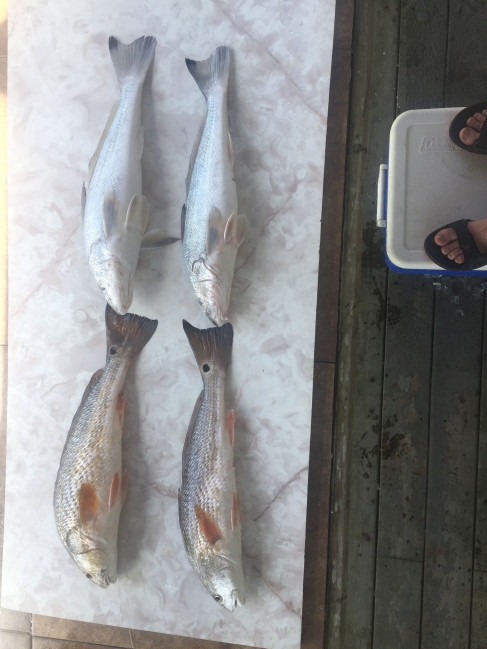 picked up a couple of 17' channel mullet on elmers beach last week.

We were on the island this weekend, went to get supplies at safe way & there were a large amount of police & a body on the side of hwy 1 right around the butterfly dome area Never saw anything on the news

I have an AR that i have only shot on the target
range that i plan to use on a hog hunt. i been shooting 55gr cheap target rounds on the ranges with great results. the hollow pt rounds i bought
are 64gr how close should these be to the target rounds at 100 yards. i'm a fisherman not a hunter
so this is new to me thanks 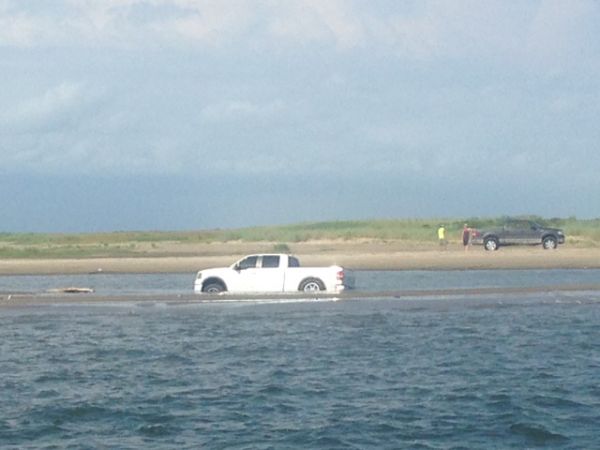 Saw this truck in the pass about 8:30 this morning. If they don't stop this they're gonna stop yall from driving on elmers. tuff fishing the weekend but we manage a few trout each morning 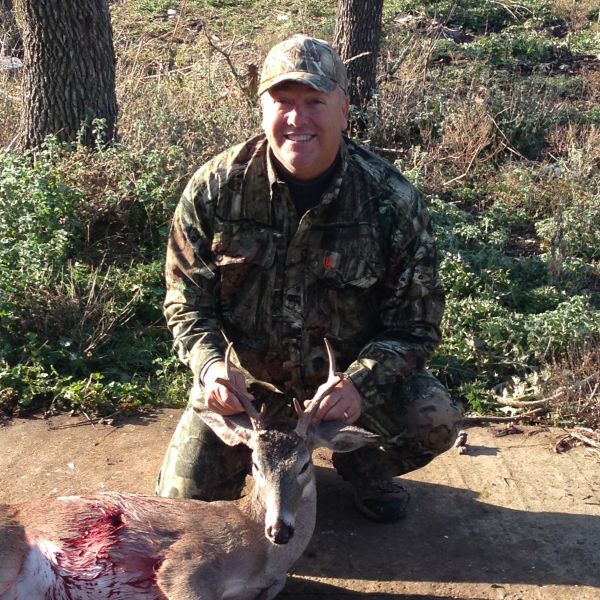 It took me 52 years but I finaly went deer hunting. I took up a friends offer to go to their family farm in west texas. took a 6pt friday morning & got the 8pt and doe the next morning. the deer arn't that big but they are plentiful. 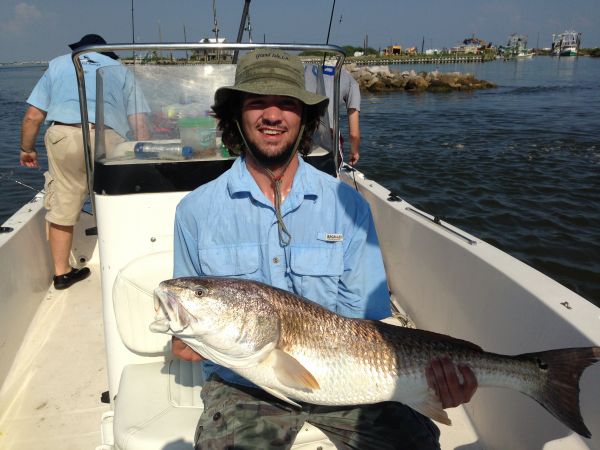 Dylan 'D-MOO' Mouton is fighting for his life at Lafayette hospital this moring after suffering a seizure Friday that stop him from breathing.

Dylan is 21 years old and my sons best friend. he is a competative paint baller & loves to fish. The next few days will be critical, as of now he is nonresposive. The photos are from an August trip this year, that is his first bull red & thats him on the left of my son who is holding the ling. Hug your kids every chance you get because you don't know when he'll call you home. God Bless

While talking to a friend of mine about being boarded by the LDWF to check my ice chest, he had a fit. He was telling me they should need warrant to open anything with a lid or hatch. Now in my 30 years of boat ownership i've always complied, got
nothing to fear when your always legal. But this got me thinking what are my rights? Are they limited to whats in plain view. police must ask permission to search a car without a warrant, do i give up that right because i'am in a boat in state or federal waters? Any wardens out there that can answer this.

Just our homeowners renewal in the mail,and of course its going up $2200.That now makes it $6743
a year. that will make it more than 80% of our yearly budget. Have to believe La citizen ins is trying to overprice every one so they no longer carry ins. WE will not pay this amount and will go the route of self insurance fund. would like to know what other camp owners are doing. by the way 5 years ago when we built it was $2800 that with a 10k dollar deductable 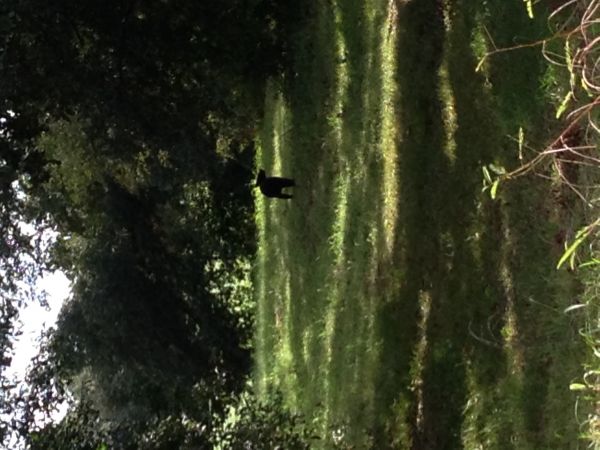 managed about 24 fish sat morning. all fish we kept were caught in the hammock area drifting
& casting gulps under corks. coolest part of the trip was having a moma bear cross the road in front of us then having 3 cubs follow her. able to get one pic before we lost them. 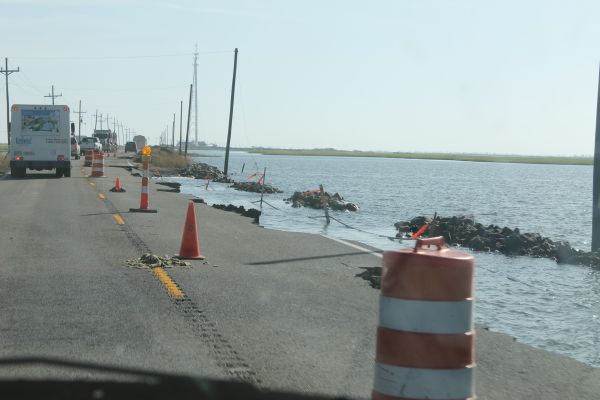 just got back from grand isle around 4:00, saw only minor damage. a few of the camps that had shingle roofs lost them. the sureway store was open along with the citco station, the citco was not selling gas at the time. the road into the island is in very bad shape, both sides were heavly eroaded. no electricty but many crews were starting to work as we left. water pressure was low but still there. didn't need id. like last time but you can expect to wait for the escort. police are there in large numbers{thank you guys} island faired pretty well.

wondering if any one has heard when they would be allowing property owners back on Grand isle to inspect camps. Rarely get any news about the island in lafayette, except from other owners.
Just hope that fancy new bridge didnt fall down!

Heading to grand isle Friday. Wondering how long the wait has been at the toll bridge, should hit the bridge around 3:00. anybody been accross lately?

Has anybody have any info on two missing kids at the state park. When at the store today on the island, the cashier was saying 2 kids were boogie boarding after a storm & never came in. any truth to this. 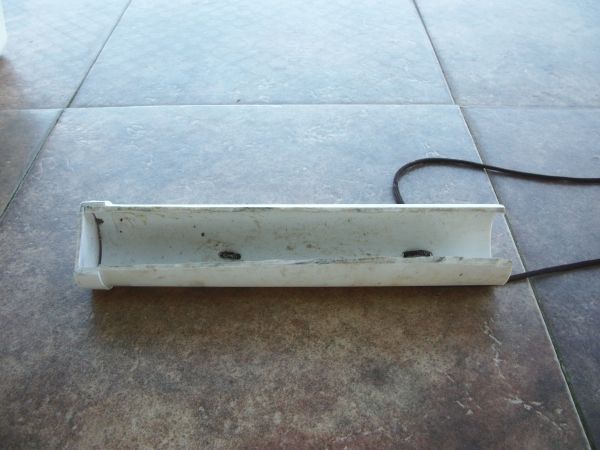 Fishin Grand Isle during the summer you can't help but run into school trout. Trying to measure 12' trout can be a pain, so heres a little gaget I came up with & I thought I'd share. 1st cut a 12' lenth of 2' PVC pipe glue the cap on one end then cut approx 1/4' off on a table saw. Shave the edge of the cut with a knife as the plastic edge will be sharp. I added the boot string to hang them in the boat or wear it in the surf or kayak. Just stick the head into the tube, let the fish slide forward til his head reaches the end,if his tail sticks out he's a keeper. The fish can't wiggle out of the pipe & there is no guess work for the kids. I also get to spend more time fishin & less time trying to keep a trout flat on a ruler. 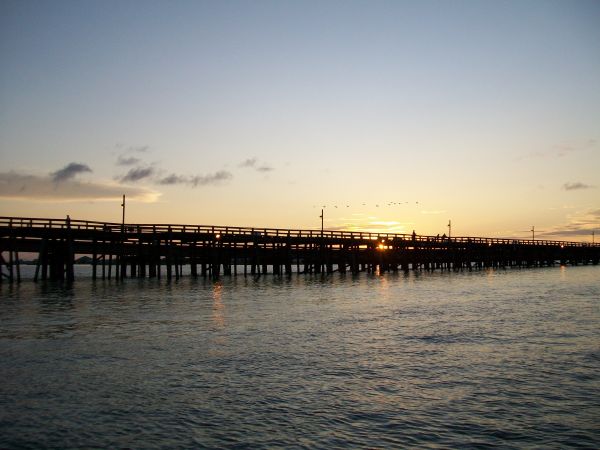 Found these while looking at camp pics. Checked the date 9/7/09. I think the bridge burned down later that night. Still don't know who on my boat took them.

bought a kayak in may, finally got to use it to fish this morning. hit the rocks in front of the water tower at 6:00 fish poping every where. most were 11' but managed to keep 14 speck just over 12. threw back at least 3 times that many. caught everything on gulp under cork. i think i have a fever an the only cure is more kayak. {

looking at a percision sport 12' from academy.
want to buy one for the camp in grand isle.
we're not sure if we'll like to fish out of them so we want an inexpensive one to try it out
this is a new product for academy. they look well made compared to the pelican brand that the also sell. any advice or reviews on percision kayaks?

I HAVE A 6 FT STAINLESS POLE BOUGHT IT ACADEMY FOR 79.00 SOME YEARS BACK WORKS GREAT IN WATER UP TO 8FT EXCEPT FOR SAND BOTTOMS HAVE A 21FT BAY BOAT JUST THROW STRAIGHT DOWN

drove down the road today, water at the bridge at the bottom of the lake was high and muddy was thinking about going but gonna let it clear a little

its the new format I rarely post anymore as for the fishing spots
I think a lot of real sportsman are just cant take the crowds and the idiots
that think they can fish because they could afford a nice boat but have no idea how to operate it. just this year I've pull 1 out of the mud and seen 2 ram the
dock so hard that people fell out of the boat. same kind of people that will pull 20 ft from you toss the anchor up in the air so it hits the water like a cannon ball then ask you if you're catching anything I usually reply 'not anymore'

thank you made appt. with Guidry's

I was raised in Lafayette. we always called them whiting . wasn't till I started fishing around grand isle that we
started calling them channel mullet still one of the best fried fish you'll ever eat

does this apply to redfish as well can we now keep them up to nine miles out?

sat. pm & sunday morning the fish off elmers were in about 8-10 ft of water. if you were surf fishing you couldn't reach the keepers from the shore still caught a lot of small ones out there
fishing vudo shrimp about 3 ft under a cork

had a good laugh on the way to bridge side when I saw that but i'm worried I drive a white dodge and the sand monster is now getting them on dry land. maybe time to paint that truck

take a look at a spinner shark. very common off our coast bigger ones like that one will have black tips on their fins also most true black tips the dorsal fin will have a dark black tip
all three are easy to confuse except the bulls will get much bigger

It was a ford, took the pic with a cellphone so its a little blurry. don't know where the last one was but this was on a sand bar in the pass right behind gorilla ville.

May 14, 2015 at 7:29pm
A comment titled: thanks every one in response to a report titled: PRAYERS NEEDED FOR FELLOW FISHERMAN

Dylan was laid to rest today.I would like to thank every one for the prayers.this has been hard for us,as he has been a part of our lives since birth Dylan did not come from an outdoors family so I taught him how to fish. He was a frequent guest of our camp in Grand Isle,a place he truly loved to be. Thanks again for the prayers, I may not always post when prayers are asked for but they are always sent. I know many of you do the same.

October 31, 2014 at 9:12pm
A comment titled: update in response to a report titled: PRAYERS NEEDED FOR FELLOW FISHERMAN

I'm to sorry to say that Dylan was declared brain dead this afternoon.this evening they will be harvesting his organs for donation. I like to think his death will give new life to another so they can enjoy our great outdoors. thanks for the kind thoughts R.I.P. D-MOO We will miss you

here's a couple of pic's of capt al & his son lil al. this was last year his son worked for him

part owner of the LostBoys camp in grand isle