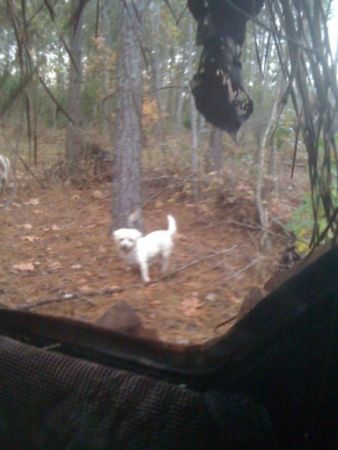 Made my way to a latter Saturday afternoon only to be greeted with a drizzle. Not caring to get wet, I opted for 'Plan B'...a tent ground blind with a feeder about 70 yds. to the north. Rain stops and I decided to spray a little Tinks around the blind. Within about 15 minutes, my first visitors show up...2 dogs!

After convincing them to move on, I figured the scent they managed to leave left me with little chance of even seeing a deer let alone harvesting one! About 1 1/2 hours later a shot rings out about 600 yds. to my south. Get on the radio and ask Bob Lee what he got. Bob had just set up his climber that afternoon and dropped a nice doe.

About 40 minutes go by and the woods have settled. Mosquitoes really starting to get hungry now! About 100 yds. to my north I spot movement. Slowly, I raise the trusty old Winchester Model 70 to get ready and get a better look only to see part of the antlers disappear into the woods. I feel my heart drop just knowing the deer either caught movement or scent of dogs, me or just maybe to much Tinks 69. Sun starting to settle more and the woods fade into that darkness that tells you the minutes are coming to an end. The woods where I first picked him up are barely visable now. All of a sudden I see movement again...now at the feeder that is in front of me. I raise my rifle again to scope the crafty animal and can clearly see he is a fine deer. Carefully counting antlers, time and shakey nerves are now becoming a factor. He has been at this feeder before and knows he should not walk out into a clearing, but the rut is near and battles have left him hungry and the sweet lure of golden grain calls him. Thinking I'll have to really test my marksmanship, I train the crosshairs on his neck and as darkness continues to creep, the corn on the very edge of the thicket providing his concealment thins forcing him to take that crucial step exposing the shoulder. Slightly moving the crosshairs to the shoulder, I gently squeezed the trigger and felt the recoil then seen fire fly from the muzzle. Looking through the scope I could see one leg sticking up in the air. The 270's Remington 150 grain Core Lock had done it's job and dropped the magnificent animal in his tracks.

He by all means is not a trophy deer by many hunters' standards, but he is my best deer yet. More importantly, I took him hunting with friends and the memories are life-long. Thanks for the hunt Bob. 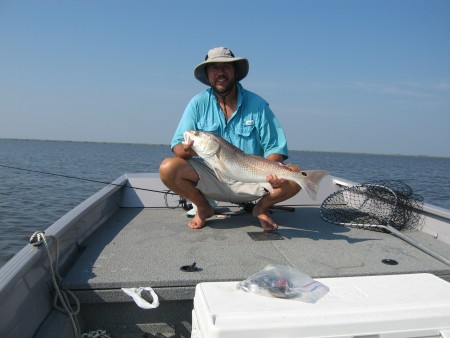 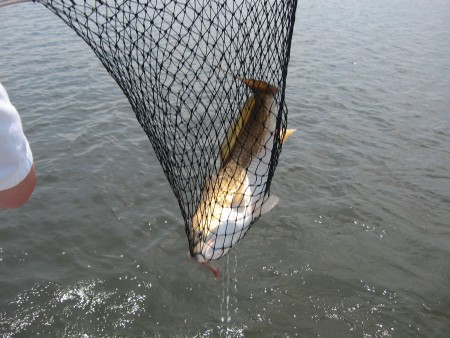 Love this time of year when those giant goldfish move in to test your equipment. Rattle traps and Gulp Live(different colors) on 3/8 jigheads were the choice of these bruts. 3 man limit along with some nice drums, blue cats and even a few bass to add to the gravy. Bite was fairly consistant but fish were scattered except for one place we stopped when all three of us were hooked-up until mine broke off (someone needed to net). Time to EAT!!!

Took Bob Lee, his daughter Brittnay and my daughter Payton to what I thought was Calcasieu Lake. Think we fished in Willie Wonka's spot today! Had milk chocolate wherever we stopped the boat and the wind kept the birds from drinking any of it...blew them to the top of the fizzy machine when they attempted to get a drink. Waves tasted of schnozberry! One flounder lost at the boat. Another day on Big Lake. Hey, still had a great time with the girls fishing with their dads. Enough laughs for memories. Thanks girls. 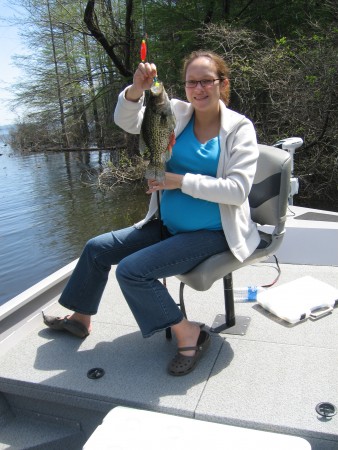 Fished Saturday with my Dad, Rayo Daugereau, Son, Phil and daugter, Heather Trahan and could have only wished the fishing was as good as the wind was hard! If I would of had salt water hitting me in the face I would have sworn we were on Calcasieu Lake! The fish caught was good but scarce. Fished buck brush in coves with blue/chartruse Roadrunners under a cork in 2-6 feet of water. Lake just to rough for Mommy-2-B out on the lake. But hey...another great day with my folks and kids, and granddaughter-2-B...just can't get much better than that. Thanks for the invite Mom and Dad. We loved the time together. Take Mom, Dad and the kids fishin'...it's worth every minute. 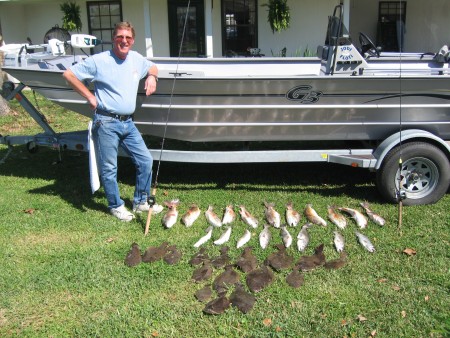 Out with good friend, owner of CommStop in Duson and local Southwest Louisiana fish and game informant, Bob Lee and managed to have a productive day on the lake. Boats as thick as the fish and most anglers out there were curtious and patient knowing that was the stratagey to everyone getting a nice catch. Reds were aggressive and hungry. Felt like we had to battle our way out of them. Crank baits were on the menu for reds and a strong tide kept lines tight...what Curados were made for or any facsimile thereof! Flounder seemed more prone to hit new penny Gulp! and market shrimp, trout hit molten Gulp! and Mirrordines around reefs. Stop into CommStop, get a cup of coffee or get you some Skittles and ask Bob where the fish are. If he doesn't know, he'll call someone who does! 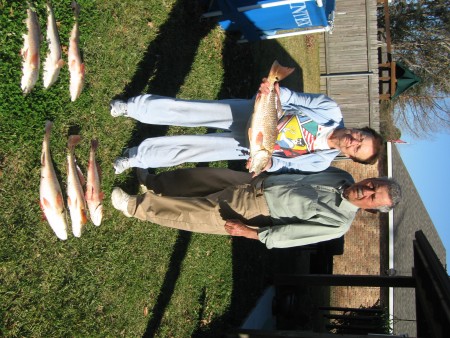 Get the kids out to fish but don't forget Mom and Dad later in the years. For those long and patient hours spent untangling lines, continuing to find fish and game to keep me interested and assuring there was plenty to eat and drink while on the water or in the blind, this trip again was for you Mom and Dad. Though there were only a few reds netted, the pull was hard and the memories etched forever as yet another valued trip well spent with those that gave me the passion to experience all that Louisiana has to offer in the great outdoors. I hope and pray for many more trips with you, your grandchildren and great-grandchildren.

Wanting to start fishing Vermilion Bay. Have always heard of fishing the Trash Pile. Where exactly is the Trash Pile? I have fished with a friend around Little Mud Point, The Hamock and Marsh Island before. Any help is appreciated.

Does anyone know if there is as much debris in area waters as was for Rita? What is condition of Cameron and Holly Beach area?

Fished with Calcasieu Charter Service on Big Lake June 11 with world's greatest Dad, Rayo Daugereau and good friend, Mayor of Jagneauxville, proprietor of Vautrot's Mini Mart, Jude Vautrot. Tough day with a fairly fierce south wind, stained water and popcorn showers trying to keep us off targeted areas but this is when you get to find out what your guide is made of. Hats off to Jake for the valiant effort and the rewards were another memory for the books...you've been doing your homework Son. 32 beatiful trout and 6 rod bending reds wore on aging muscles and stiff bones. First class service and equipment! The Triton ride was the most comfortable ride I've ever taken across that choppy old lady. Fish bites were lite and often deceiving with unexpected size until they realized they were hooked. Tricky trout! All caught on plastics...NO SALTWATER CRICKETS or corks. Only thing better than the pull was the company. Everyone should have the opportunity to experience this sometime in their life (337-598-4700)! Sorry, no pictures...camera malfunction.

Haven't seen or heard anything about the video but do know first hand what it means to get away from post to fish or hunt and get away for a while. You obviously have a great passion for the outdoors and this country even though many ask what exactly does it stand for now. When called, you answer without question whether you desire to or not and often do the job few remotely want to do. Hope you do continue to fish here and that opportunities to take part in a resource valued by so many here are a thing that will bless you and your friends time and time agin. It was rare for us but we always made the best atempts to take advantage of the outdoors wherever we might have been with the time granted us. When it was said and done, it was the time with those you trusted that mattered the most and whatever the people that opposed you didn't really amount to a hill of beans anyway. Good luck in all of your endevors and if I do happen upon you and your friend fishing the area, know you have a spot in my boat as a thank you and the opportunity to mak more friends. Thanks for your service to the country we call home.

October 12, 2009 at 8:35pm
A comment titled: River or lake in response to a report titled: Mermentau Turns Red

Fished the river and the lake. Fish were scattered.

August 29, 2009 at 8:58am
A comment titled: Yankee buddy coming to town in response to a report titled: REDS WERE ON FIRE

Nice post. Have an old Army buddy coming in from Nebraska for Memorial Day. Will be in for the week. May have to bring him out there if the conditions permit. Its great turning someone on to fish they've never had the opportunity to catch before.

Appreciate the information. Hope it continues to cooperate this week!

That's a nasty I can live with. Been dying to get out. Maybe this week if this front doesn't totally blow it. What does the water look like? Salty, fresh, muddy, clean?

Thats what its all about there!

We always called them "Wild Cherries". Makes a great wine.

May 13, 2009 at 6:13pm
A comment titled: Saltwater Cricket in response to a report titled: Trout Fishin in BIG LAKE

Is that a cricket on your line? Looked like fun!

May 05, 2009 at 7:12pm
A comment titled: Salinity in response to a report titled: Lake Calcasieu Report!

Thanks for the site info. What is the ideal salinity level for fishing Calcasieu Lake?

April 23, 2009 at 8:54am
A comment titled: Should've been there yesterday in response to a report titled: big lake

Wish you were out there yesterday throwing that party. Would've kept us from getting our a$$ wet and cold!

Where is Myer's Landing located? I do fish there from time to time and not familiar with other landings.

An old turkey hunter's secret if you don't like sraying OFF all over the place. Wherever you buy insect repellents, look for a product containing permethrin. The day before your trip out, spray it on your clothes only...just your clothes, not skin. I have a problem with any insect repellents with deet because of some type of allergy. This will help keep them at bay...just try not to open your mouth while the boat is moving!!!

Thanks Guy. Looking forward to fishing all of that area more.

Need a hog exterminator to come work for you?

September 21, 2008 at 5:31pm
A comment titled: Red Splash in response to a report titled: PICTURES FROM CYPREMONT POINT BEFORE GUSTAVE HIT

Sea-Meant has not filled this section yet.