Mojo in response to a report titled:  Snipe

Ordered the new bowtech Assassin! Super pumped and can't wait for it to come in. Who else is getting one? 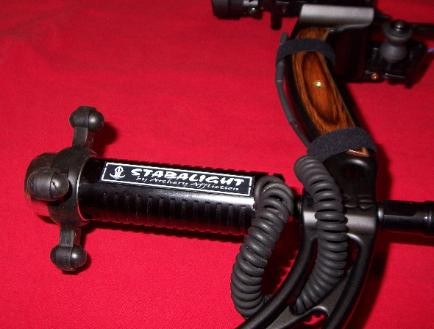 any body have one of these "stabalights"? i'm thinking about getting one to add to my bowfishing set up, just for some added light when in the boat, or to open me up to maybe some bowfishing from the bank when i dont feel like listening to the generator run in the boat all night. im looking for reports, bad or good, on this light, and also looking for a local dealer if anybody knows of one.
thanks, cp

well guys today i have a little rant! i drove into sherburne this weekend to do a little deer hunting with my younger brother. i would just like to say that i am 26 yrs old white male, driving a 2008 crew cab chevrolet 4x4. well i got a little excited to get in the woods and i realized as i drove past a gamewarden truck parked on the side of happytown rd. that i was going 40 in a 20 mph zone. now as i got out of my truck and very respectfully told them hello and asked how their day was going, they immediately frisked me and began to question me about having narcotics in my truck. NARCOTICS IN MY TRUCK?!?!?!?!? ARE YOU KIDDING ME? ITS NOT A CADDILAC AND I DONT LOOK LIKE A SUSPICIOUS PERSON. They completely tore my truck apart for at least 30 minutes and all but strip searched me and my brother while my fellow sportsman drove by and looked at us like we were criminals because thats how we were being treated! these guys ruined my hunt and pissed me off so bad that when they gave me my 120$ speeding ticket i just turned around and went back home. so thats how my weekend hunt went. i am so aggrivated with the federal fish and game right now that i may never step foot on a refuge again just so i can limit my chances of an encounter with them.

alrigt guys, i know that this has been discussed before, but i am doing a little homework and i would like to hear some oppinions. do any of you guys hunt based on moonphase? moonrise/ moonset? i am just trying to give myself any edge i can get while attempting to get my first bowkill and really trying to get the bigboy that i have on camera. any input is appreciated.
thanks, c.p.

thinking about getting the new Leupold rx-600 rangefinder. does anyone have this unit? any input?
thanks, c.p. 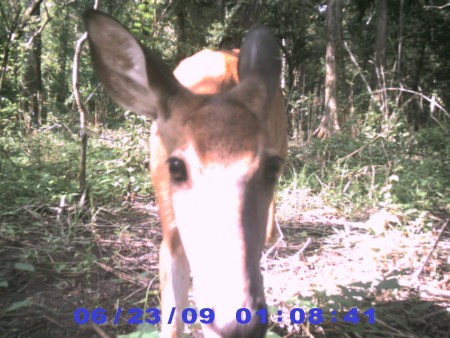 anybody got pros and cons on the thompson center encore pro hunter? i'm looking at getting one in 30-06. any do's and dont's would be appreciated.
thanks, c.p. 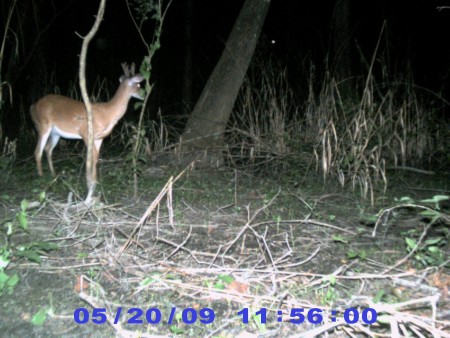 how old ya'll think he is? 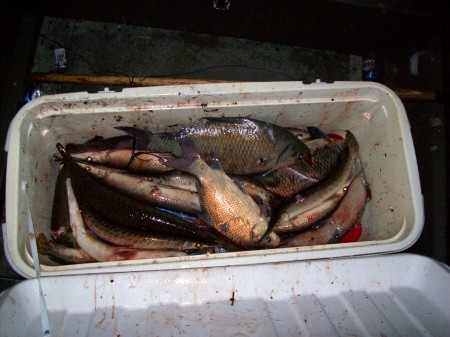 well guys i finally got a chance to try out the bow fishing rig that i won as a door prize. it is actually alot harder than i thought it would be, but once i got the hang of it, game on. maybee next trip i will figure something a little better for lights. it is real hard to shoot with the headlight on your head. does anyone have a light that screws into the stabilizer port? and does it work good?

how many guys on here hunt in sherburne? i can't wait till bow season. just went scouting this weekend and found alot of good deer sign and an ungodly amount of turkey sign. 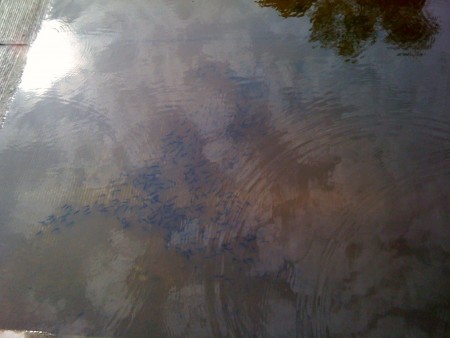 Alright guys it's time to vent a little! i woke up early this morning with a fire in my a$$ to burn some gun powder. so i called up a friend and we loaded up some weapons and drove the 40 miles to shoot at Sherburne, only to find that the rifle range that we all pay for with the state taxes coming out of our check every week is closed! wow! i am PI$$ED! the gates were padlocked at the rifle and pistol range with range closed signs and no explanation! whats the deal? any way, if anyone knows when it will re open let me know so i dont waste another sunday morning.
thanks, c.p. 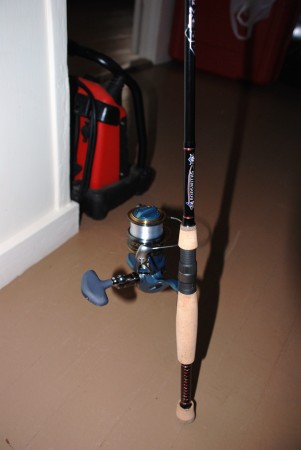 hey guys. i'm looking for some opinions on the best pound for pound spinning reel setup for speck fishing. looking to spend about $200 on rod and reel.
thanks c.p.

what are a couple good baits that i can pick up at academy to fish reds and specks with tomorow in cypremort point? i got in vited to go with some freinds and dont wanna have to use all their stuff.
thanks guys, cp

is any body on here familiar with the water ways between bayou portage and henderson. i am trying to move a houseboat.
thanks chris

who has a good recipe to share for barbeque redfish on the half shell? i'm looking in to fried sacalait and reds this afternoon but also have a couple that i left on the scales that i wanna try ou on the grill. any info is greatly appreciated.
thanks, c.p.

alright heres my offer! if any one has an idea in there head and they want to make it come to life just let me know! if you want to manufacture something for your boat,truck, 4-wheeler, ect. anything! i want to do it! i am a machinist/welder. i have experience and rescources. i have acess to cnc machinery and can mass produce any product (metal) that you want. why just wait untill the next outdoor expo to see someone else getting rich off of an idea you have been thinking about? my prices are very reasonable and i am just trying to get my own business started. if anyone is interested e-mail me and we can talk.

also just because someone has a patent on something dosnt mean i can't build something similar to it. if you dont want to pay for "name brand" and you would accept something a little different then we can do that too.
tanks, c.p.

alright guys,
who has one of these " pawpaw's pirogues".
i'm in the market for a good fiberglass piroge and these look pretty nice. was wondering if you have one how do you like it? or if any one else builds similar boats to these? 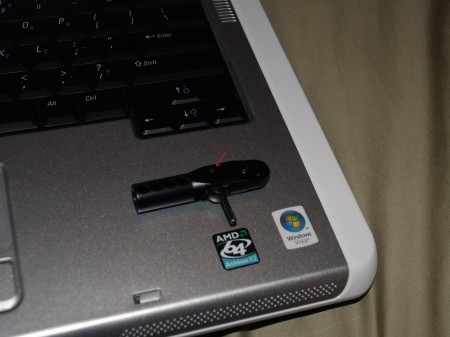 has any one ever taken apart a scott
'little goose" release?

mine is locked up and i need to know if the rods that hold the cam in place are pressed in dowel pins or if they are threaded bolts with the heads cut off?

i tried to tap them out but don't want to beat them out and then find out that they were screwed in. 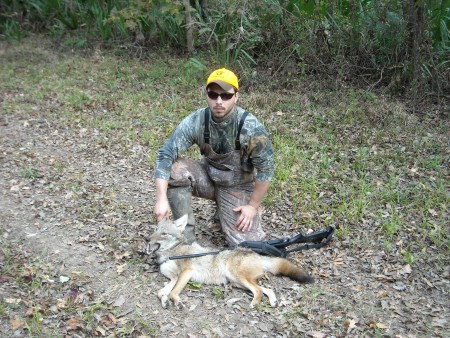 I WAS ABOUT TO SHOOT A LOG, TO CHECK MY RIFLE FOR THE FIRST TIME THIS YEAR WHEN THE LOUP GAROU WALKED OUT RIGHT IN TO IT. THIS DUDE BASICLY BEGGED FOR IT!

Had em smothering a mojo dove the other day!

I shoot a copper john dead nuts 2 and i like it. It is a 4 pin sight and you could very well mess up with it. BUT i look at it this way, if you take an extra 2 seconds to make sure u are shooting the correct pin, then you have given yourself 2 seconds to become more comfortable and educated before you shoot.

January 05, 2011 at 8:05pm
A comment titled: Full in response to a report titled: duckhunting chokes

The only choke that would come with a benelli and would be labeled ' no steel' would be a full choke. All i can say is the worst that will happen is the end of the barrel will swell causing the choke to get stuck, happened to my beretta and it sucks.

January 02, 2011 at 9:30pm
A comment titled: Sweet in response to a report titled: Thistlewaite Buck

Good deer man! I spent the day out there today, i just cant figure the place out.

December 28, 2010 at 8:24pm
A comment titled: Sustained lead in response to a report titled: Pointers/ Advice

Best i can tell you is keep yor gun moving at the same speed as the bird and shoot for the beak on most shots and continue to follow through after the shot. Also focus on killing oer bird at a time dont rush your shots

Well my bow still isnt in, but if the stars line up just right and it does come in, i have a bunch of days off comin up so hopefully i will have some pics to post!

I shot my brothers bow, he has the qad pro anf i liked it alot. U can precock it and if you let down slow it dosnt fall.

I am waiting on my new bow to come in, it comes with the hostage and i am pulling it off and putting the qad. I have a buddy that had a hostage and the brushes would wear out fast and his groups would be all over the place.

I cam remember my grandfather burning toilet paper soaked in alchahol in a cofee can, but i dont remember any specifics. I do remember how nice the heat was an also you just put the lid on when you are done. Sterno cans also work well

Can't beat the big green egg, i love mine! Do a lil research and it won't be hard to make your mind up.

Here's a situation u make your mind up.
Say your make a hunt on Wednesday shoot and fatally wound a nice buck but don't find him. And then on Saturday you come across his remains, cut his head off and throw it behind your truck. A couple days later you drive through the gates at thistlewaite and a game warden meets you at your truck just to see how things are going. Right about know u gonna wish u had a tag on that deer! Trust me it don't matter if you say that deer ran in front of your truck as soon as you take possession of the animal or some of it's body parts, well then ..............
Cheers

That's what I would think. If u found a buck 3 days after the shot and cut his horns off it should be tagged.

Yea Andy I agree with what you said, but if you shot a deer and found it several days later and it was eaten up and you didn't take possession of it ( let's say it's a doe) would you tag that animal?

I'd say no. It is a deer harvest tag, and in my opinion, the deer was not harvested, it was just killed.

December 03, 2010 at 8:34pm
A comment titled: Yep in response to a report titled: Need a Little Assistance

95? That deer must have 35' in circumference alone! Let us know how he measures out when you get it done.

i dont know about the score, but thats some heavy duty head gear! if i had to guess id put him in the 14o's

connais pas has not filled this section yet.