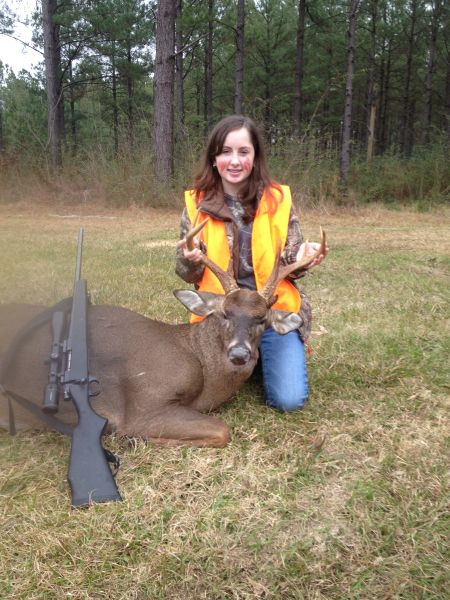 Had the best hunt of my life with my daughter Sara the last saturday of the deer season. She even had to tell me I 'needed to calm down' before the shot. Main frame 8pt. with a split brow tine and a little trash on the base of one horn makes it a 10.

Allright sportsmen I'm a week away from bringin my new (chocolate lab)huntin buddy home. I am at a loss on what to name him. Give me some ideas & with all this oil spill drudgery a story on how ya came up with the name. 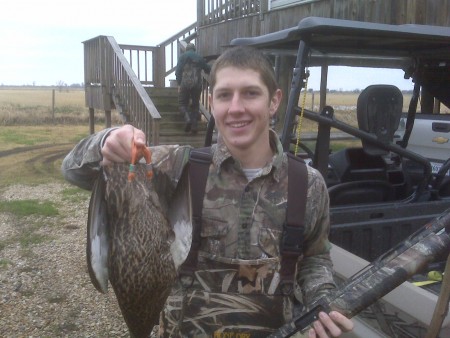 We had a pretty good weekend with the ducks. Saturday me & my nephew Drew Comeaux limited out with a mixed bag of teal, broadbill mallards(shovelers) & one ring neck. Sunday will be a memorable one for Drew with him taking his first banded mottled duck with a bonus $100 band to boot. I've been looking for a band all year and he got 2 at once. 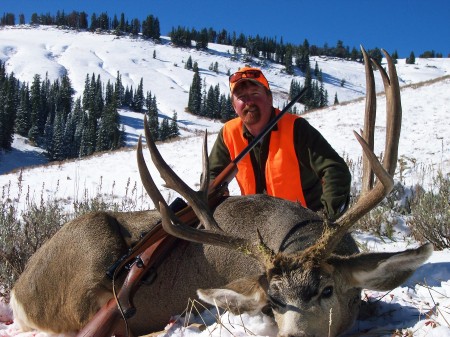 Well I'm going to try to post some pics of my muley I harvested this October. I'm new to this attaching picture thing but I'll give it a try.

Alright sportsmen, I'd like to hear some input on Honda's Big Red. Rode one yesterday & really liked it. would like some pros & cons on this particular ATV. Thanx

Alright guy's I'm headed to Grand Ilse this weekend whether I want to or not. What would ya'll recommend for a few fish to stink the grease? I only have a 18 foot bass boat so I'm limited to stayin close. I know it's early, but someone on this site should at least have a few suggestions that may have worked in the past.

It's not just the convenience of the outfitter, its his knowledge of how and where the animals live. You could easily go on a DIY and end up eating tag soup.

My advice would be get an outfitter for your first time. I'm not saying you couldn't do it, but those critters aren't whitetails.

Nice catch. On bottom or under a cork?

I'm a duckaholic. Fall is for busting birds. Then maybe limit of reds.

Mostly out of Vermillion bay. No fish over there either!

Glad to see there are still no fish down there!

Got the top in yesterday, The fabric is 'Sunbrella' 9.5 oz. canvas. All hardware is SS and It was a snap to put together and install. If I could figure out how to attach a picture I would. I don't think you'll be disappointed.

No problem. I'll let you know.

I just ordered a whole new top from boatcoversdirect.com. the sell replacement covers too. I ordered mine yesterday and the shipped it the same day. It should arrive tomorrow. The prices for the whole bimini top didn't seem too bad. Not sure about the replacement covers.

I had a lab that naturally pointed. Try her out first before worrying about training.

I know this is gonna sound crazy but we used to fry the snapper livers too. somebody from the crew would fry them while we cleaned the fish. Very light and tasty. Haven't been snapper fishing in years though. The crazy season/limit makes it not worth burning the fuel.

I try to buy the largest finger mullet. I am normally targeting bull reds so they are plenty big enough. But We have caught some big sharks with the same bait. Lost plenty of them due to tackle not being big enough. They are there.

I just buy the frozen mullet and cut them in half.

You should do well shark fishing Holly Beach. I catch big bull reds and sharks just east of there.

I too had a frog in my back yard. One day I witnessed him eating baby birds as they flew out of the nesting box by the pond. A couple of days later I witnessed a hawk swoop down on him and snatch him up. What comes around, goes around. the vicious circle of life.

I'm ready to buy a Ranger and cant seem to find a dealer that has one. Where did you buy? and did you like the service, etc.

hazautomach has not filled this section yet.