Does anyone have any tips or areas they would like to share to find some fish? My father and I are coming down for a week to fish around the grand isle area. Thanks in advance 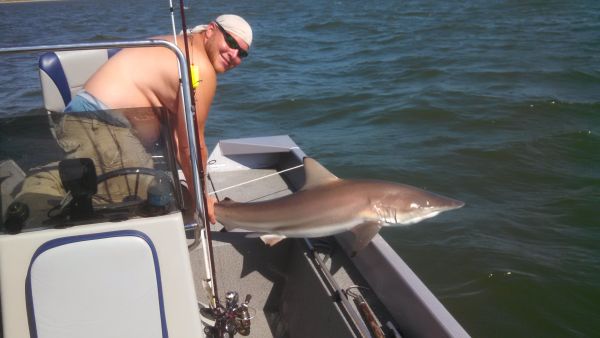 Can anyone tell me what species shark this is? My father and I caught it last September while we were down in grand isle. Shark was CPR

my father and I are heading to grand isle next week. was wondering how this storm is gonna mess up the fishing or if it would even be worth bringing the boat or if we should just stick to the bank

is the gulp shrimp really worth the money? I know a lot of captains and weekend warriors both are switching to it for specks and reds because live bait is 'to expensive' but 10 gulp shrimp is 20$. and are they better then the vudu shrimp. last year I had the best trip ive ever had thanks to the vudu shrimp but again their on average 7$ for 2....

im taking my father on a fishing trip in September to grand isle. I was wondering if an 1860 g3 center console with a 70hp Yamaha is enough boat to run around the marshes and try and catch a few fish and if anyone has any tips on when/where/what to use. we usually just fish from the surf or elmers isle but want to use a boat this time. all advice would be greatly appreciated.

What about the specks and reds? Are they still biting good? Last year this time all we could find were the bull reds. No slots

what colors do y'all recommend? we will be going to grand isle in less then 3 weeks and id like to have everything before we get down there. will be fishing for a week

so on a calm day would I be able to run out to the close rigs or would that be a bad idea in such a small boat?

BoysFromIllinois has not filled this section yet.