We went down to the marsh camp on Friday afternoon with the intention to tag some reds. We were met with very low water and could not get into the ponds.

Saturday started slow. We picked up a few specks here and there at the islands but not much happened until the water started moving. I got a call from a buddy that he was into them hot and heavy. We trolled up next to him, dropped the power pole and within an hour had a two man limit on topwater. Can't get much better than that unless I'd have taken pics!

We then tagged and released a few trout and went back to the camp for whiskey and the boxing match.

Sunday, we tried to get more reds to tag but could not buy a bite. We saw a bunch of them but they would not bite anything. 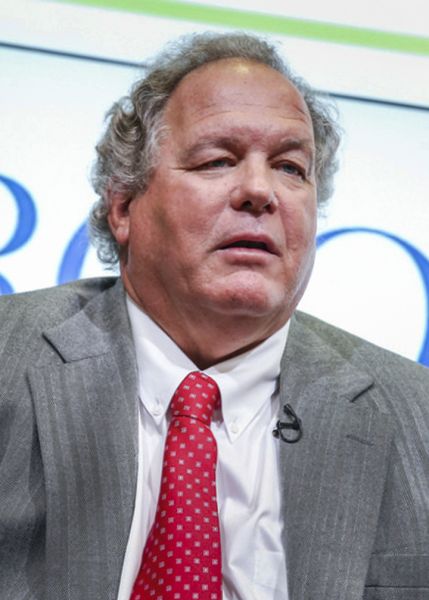 Charter Snapper Captains: If you supported Amendment 40, please check in here. I hope no one ever uses your services again. I will make it a personal point to dissuade anyone to charter your boat.

At the forefront is Captain Steve Tomeny. If the readers of this forum have other names, please post them here. 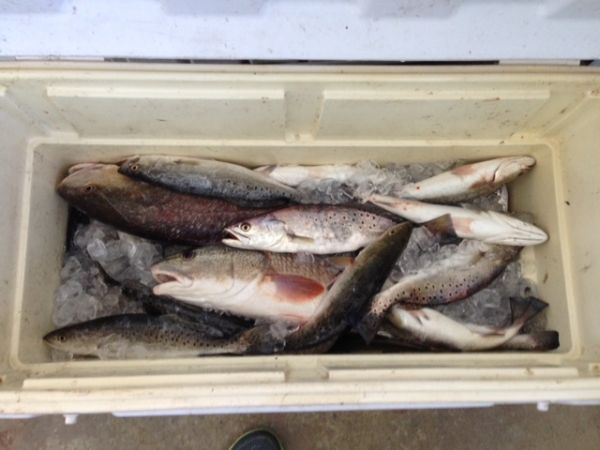 Since I heard that there were 200 boats in Lake Merchant on Saturday, I went south early Sunday morning to do a little trout scouting. The weather man had it wrong again. We were able to fish the south side of the islands on both sides of Wine Island pass for a short time until the wind kicked up. Then it was to the back side of the islands where we found clean water and less wind. We picked around and managed 20 trout and 3 reds. Kept two reds to eat and released a third. 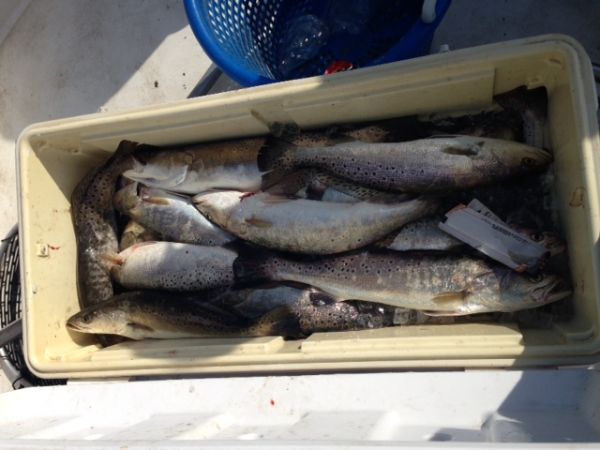 With the break in the winds on Sunday, we decided to head south and fish the southern lakes and bays. ended up with 35 nice fish in the 2-3 lb range and a couple of fish around 23' that we released. the fish are out there year round, you just need good weather. 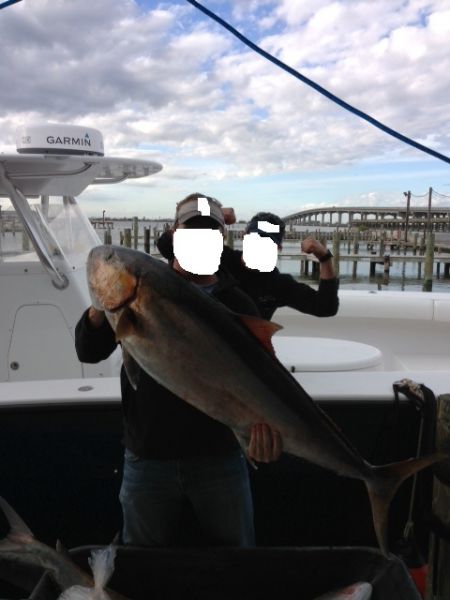 On Saturday, we went out of Grand Isle with Capt. Ryan Dicharry with Reel Addiction Charters aboard the 33 Freeman, Midnight Rider. We got out to a late start as many drinks were consumed Friday night.

We never really got on any YF tuna, but the AJs were thick. We ended up with 6 AJ and one decent BF tuna. 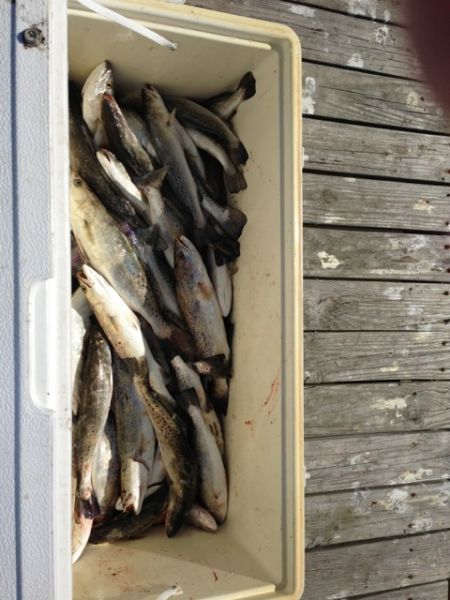 Managed a nice mess of trout yesterday on live shrimp. Smoked em on some structure in lake pelto 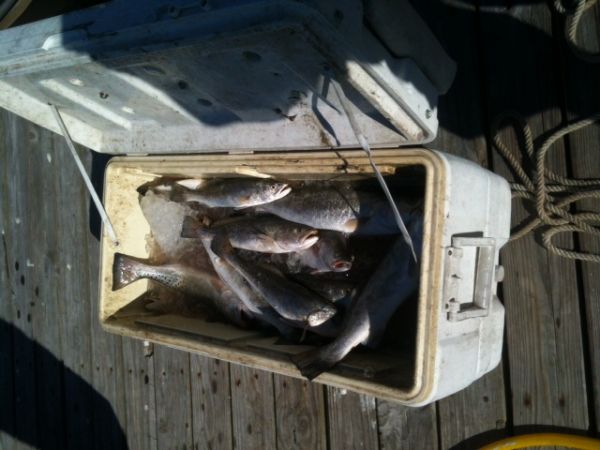 Well not really a holocaust but I have to compete with 'slam', 'murder' and 'smackdown'! It was a beautiful weekend. Fished all around Pelto mostly on oyster reefs. Caught them on topwaters and chicken on a chain jig heads. I'm not going to get more specific on my location, so don't ask!

shrimp caught in a cast net were everywhere.

Heading down on Saturday. anyone been doing anything in Big Lake? this is my first time fishing there, so any tips are appreciated.

This is not a report to bash the weatherman/weather service/weather computer, but an honest discussion on why is he consistently wrong. For instance, he predicted 3-4 foot waves for the coast yesterday, but today his prediction is for 1-2s with 5-10 knot winds.

On what does he base these forecasts and why can't he get it right? Again, just trying to get a straightforward discussion on the factors that go into a mid-range forecast. Certainly we can do better in this era of technology.

I am planning on storing my boat in a facility with no power. I typically go down to my camp (boat access only) and return to the landing after fishing and running my trolling motor batteries down.

When I return to the shed, I want to recharge my TM batteries while the boat sits for a week or two. Will a solar panel provide enough power to recharge the TM batteries over the course of a week (provided the sun shines)?

Has anyone ever done this and can you suggest the size panel I will need? Thanks!

Anyone have any reports out of Pelto/sulfur mines? I know the weather has been choppy, but going to stick my nose out in it this weekend and give it a go. 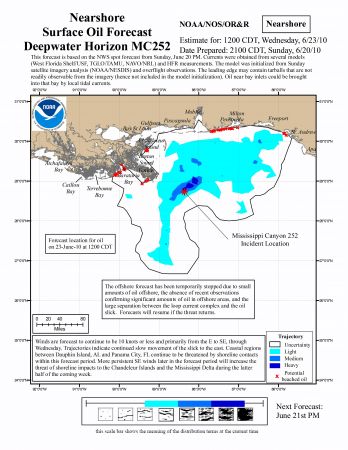 At the bottom of the latest \'oil Spill Trajectory\' map, the following message appears: \'&#65279;The offshore forecast has been temporarily stopped due to small amounts of oil offshore, the absence of recent observations confirming significant amounts of oil in offshore areas, and the large separation between the loop current complex and the oil slick. Forecasts will resume if the threat returns.\' While I understand and see that certain areas are drastically impacted, I wonder if this whole thing has not been blown out of proportion by the media and politicians. Significant landfall has only occurred in the deep delta. Our neighbors to the east have experienced minimal oil impact. The real impact is the government imposed impact, i.e. arbitrarily shutting down entire industries even without evidence of a real threat. Don;t get me wrong--the folks around Venice have seen more than I can stand, but the overall picture has been way overblown.

How often can we expect LDWF to post updates to the closure areas? Last one I see is June 9, 2 days ago. The reason I ask is that NO oil has been reported in Dulac/Cocodrie area and none is 'projected' to oil that area, yet fishing remains closed in Pelto. If this situation is true, why can't our government react in a real-time manner--i.e. get out of the way of unspoiled areas?

I got invited to hunt with a client this afternoon in Woodville. Weather looks rainy and windy and possibly snowy. You think they'll be moving or should I stay in the office and work?

We hosted a small tournament out of our camp Saturday and a dozen boats had about the same results. They were hard to come by.

yes but only when the wind lays. It's tough out there lately

nah. they're not ready yet. Stay home until May

That sucks. You may want to install a bar on your doors with a padlock

I hope ya'll released at least a few. those are some big fish

I fish the area a good bit. Limits are hard to come by these days, so I've decided I'm happier fishing for big trout. You are fishing the right areas, you just need to change your tactics and branch out to other structures in the area. I'm not letting my secrets out as it has gotten hard enough to get on em with so many fishermen out lately. Keep at it and you will get better.

I still learn something new every trip.

No one wants to read all caps.

was this on the refuge or private land?

was he splashing mud on your front deck? clean your boat, man!

Let's add to the discussion the a-holes that block the entrances to the mines and get mad when I quietly troll past them to gain entrance. I'm being as polite as I can be but you're blocking the dang entrances. I promise if I scare a fish, they will return shortly after.

There's a guy in red Triton with his wife that I verbally spar with every time. It's not like I'm running the big motor anywhere near him.

he's so hot his tongue is hanging out!

as others have said, depends on location. For Dularge/Dulac area, west winds are bad because they blow the water from the Atchafalaya into the fishing waters. Grand isle usually likes a west wind because they are not affected. East winds mess up Grand Isle because river water blows towards GI.

The fees don't bother me but the ladies at LDWF do. Last time I was there, they were extremely rude and put off that I asked them to do anything. State Workers...

You said it better, Mike. thanks

motorboat has not filled this section yet.