Hey guys, I wanted to get some opinions. I know everyone has a different thought on chokes and loads. I am hoping to save a little time and money. I have a Remington 870 and looking to get the best performance from my loads and chokes. I know I will have to shoot it to truly find the best results, but any help is appreciated. I have a Rem xxfull turkey choke, Indian Creek, and Jelly head. I have been shooting the hevishot magnum blend.

Would you mind sharing what you have had the best results with? Thanks

Hey guys, I am leasing about 500 acres that backs up to the amite river. We have mixed hardwoods and pines. I am trying to figure out the best time to plant spring/summer plots, and what is best to plant in this area. We are in the process of getting the soil tested and adding lime. We are trying to hold as many deer as possible as well as make the property attractive to turkeys and other game. Thanks for the help. 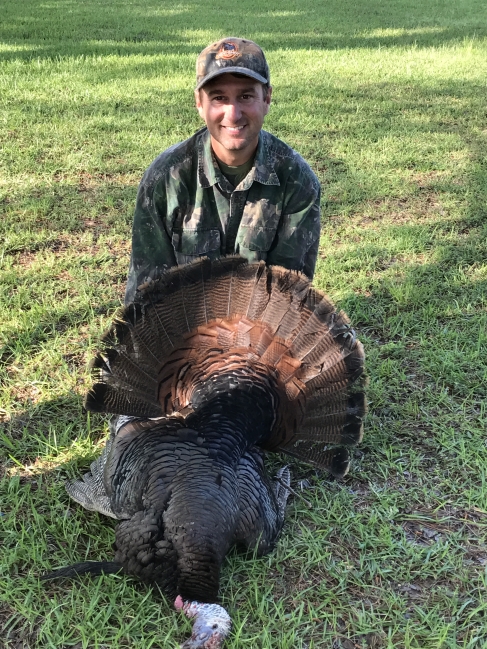 Had a great hunt on Tuesday morning, had two gobblers going nuts from first light. They must have gobbled at least 75 times. They came right to the decoys. This was the first bird that I called up by myself. My dad was a huge turkey hunter and died a couple of years ago, before I could really learn from him. This morning was a special time for me. The bird had a 10' beard and 1' spurs. Not a huge trophy, but I'm very proud. 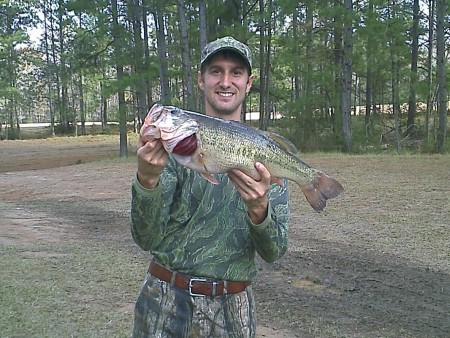 I'm looking for a good taxidermist. I have a nice bass that was caught during deer season in between hunts and would like to get it mounted. The closer to Baton Rouge the better. Thanks 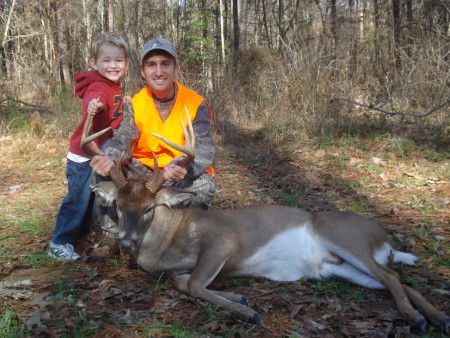 I had the pleasure of hunting on a friends land near Natchez, Ms. I had several great hunts. We saw some amazing deer, several that would go over 150". I was blessed enough to take this management 8 point while he was slipping through some cutover. He was 16" wide and 6" around at the base of his antlers. He was 5 1/2 years old. We saw over 40 different deer this weekend. I thank God for the opportunity to take this deer, but more imprtantly the opportuntiy to spend it with my son

I have not received an email either. Please send to preston@redeemerbaptistbr.org thanks.

Loved reading your stories about your trip to Texas. My first turkey was a Rio that my dad called up for me when I was 14. There was at least 6-8 gobblers going nuts at daybreak before the gobbler I shot came off the roost to our position. I will never forget that hunt. I am wanting to take my son for his first turkey next spring. I would love to talk to you about the ranch you hunt. Is it private land? Or is it a ranch that one could book a hunt for next spring? Would you be willing to give me some details?

That sounds like an amazing hunt. Were you guys hunting on private land? Or was this an outfitter you were hunting with? I got to make a Texas hunt years ago and was amazed at the number of birds. I have been itching to get back to Texas to hunt them again.

How did you do? Did you find those turkeys this weekend?

Congrats!!! Tell us more about the bird. How long was his beard? What kind of spurs did he have?

Thanks a lot. I can see now why my dad was so obsessed with chasing turkeys.

I hope to kill one soon. Went this morning but the river was too high and kept us away from them, but it has to go down sooner or later. Congrats

January 12, 2009 at 9:02pm
A comment titled: Ignorance is not bliss in response to a report titled: Gun Grab

I have a good friend who experienced a similar incident in Texas. He was arrested and spent the night in jail. He ended up having to do 100 or so hours of community service. Just because you are unaware of the laws in that state it does not alleviate your responsibility to follow them. I know that it sucks, but you are screwed.

October 21, 2008 at 9:05am
A comment titled: great taxidermist in response to a report titled: info on mounts

There is a guy in Amite that is the best that I have seen. He is reasonably priced but his mounts look great for years. My dad has a mount that he did 27 years ago, and it looks better than most mounts by other taxidermist the day they get them back. His name is David Elsey

February 28, 2008 at 9:02pm
A comment titled: Thanks in response to a report titled: great weekend

I appreciate that "killer." Big John went with me and didn't kill anything. What goes around comes around.

preacher78 has not filled this section yet.