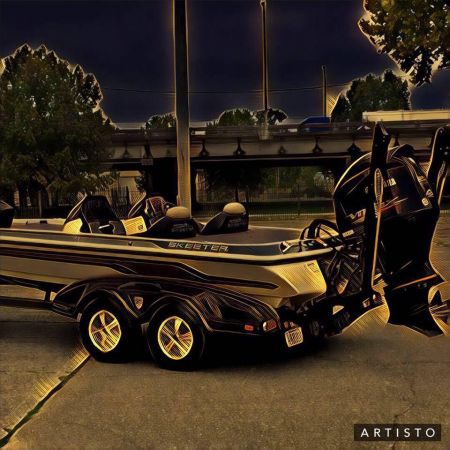 I keep hearing about Tank Battery area in Lake des Allemands is good for bass fishing. Wondering if anyone would be able to help me find this area.

Any help will be greatly appreciated. Thanks 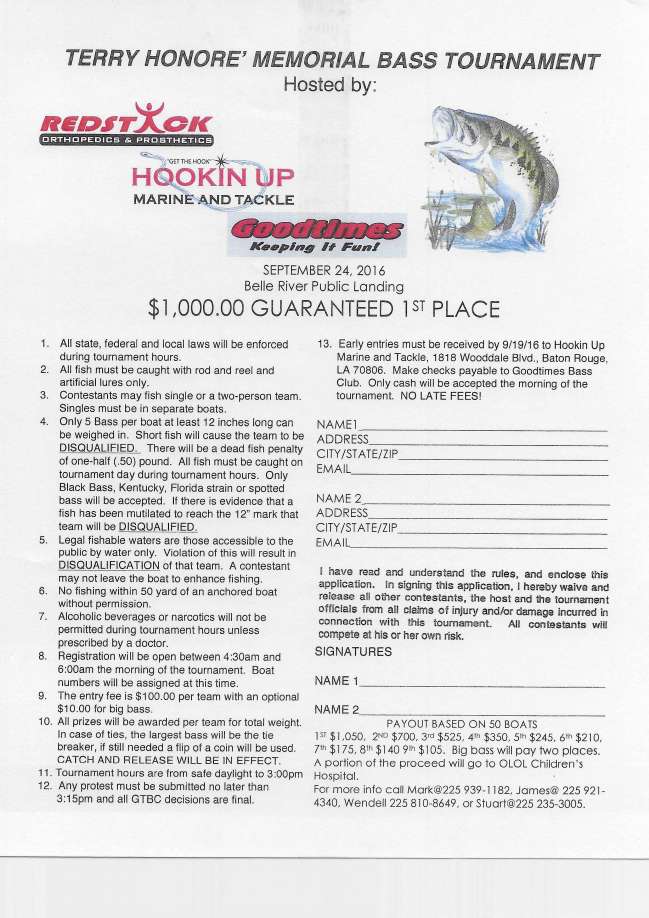 2016 Annual Good Times Bass Club Open Tournament to be held in the Atchafalaya Spillway. Launch will be out of Belle River Public landing. $1000 guaranteed to first place. Entry fee is $100 per boat (2 members max) with a $10 option to compete for big bass. See flyer attached.

Everyone is welcome, and take off will be at safe daylight.

Launched under I-10 at Butte la Rose yesterday and saw a sign near the ramp stating that draining would begin in Henderson within the next 2 weeks and not to launch if the Lake Pelba gauge is under 6'. Supposed to be low until November.

I just started fishing here, but do they do this every year?? Thanks

Anybody having any luck in the Henderson/ Lake Pelba area? I've been thinking about going and fishing around the Interstate pilings, but I'm new to the area and not sure if the water level is ideal. Any help would be greatly appreciated!

I just bought my first bow (Bear Archery Truth 2) in January, so Im relatively new to archery. We were talking archery at the camp, and a bunch of guys were saying that they shoot custom arrows that cost $120+ per dozen. So when the conversation reached me, i said, "I shoot Cabela's Stalker Extreme arrows." There was a brief moment of silence, and then they al laughed and commenced to telling me how I couldnt get accurate groups with "cheap arrows". Not wanting to be the butt of the joke, I said, "Lets go shoot from a stand outside and see who groups the best."
Three of us get in a treestand and one guy had horrible groups, the next guy had a respectable 4inch group; however, my groups were so tight that my broadheads were actually slicing the fletchings on my previous arrows. It may have been shooter's error on their part, but I learned that archery is all about fun and you dont have to spend tons of money to shoot well. My cheap ($50 per dozen) arrows work for me and thats all that matters.
I just want to wish all you guys a fun, safe, and successful bow season, and keep the pics coming 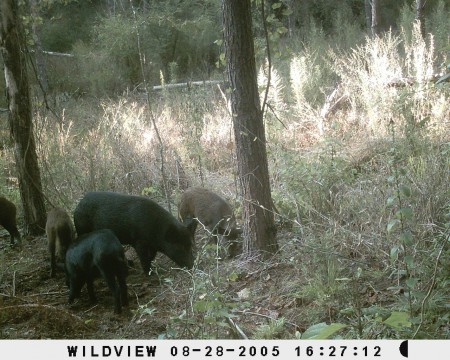 I checked a few cameras this morning and saw a monster hog & his friends eating some corn that I put out, and I also saw some healthy does too...So I know my big boy buck isn't far behind. Cant wait for bow season to crank up!

Hey Guys, I recently moved to Baton Rouge about six months ago and was looking for some local WMAs or any other local hunting grounds so that I can do some bow hunting and some rabbit hunting after deer season. I would perfer somewhere accesible by foot or ATV. Im also interested in reasonably priced guided/leased bowhunts. Thanks guys

I need a few opinions...

Im getting into rabbit and squirrel hunting next season, and I was wondering what's the best gauge for swamp rabbit hunting. I'm automatically inclined to think a 20 gauge would do the job, but I know a couple of guys that I work with who swear by 12 gauge because of the thick cover. Im going to end up getting both gauges, but which gauge would you guys get first???

Is the butte la rose launch under I-10 reopened?

Wish I still lived in Hahnville.. I'd be pretty interested... I joined another ALBC club in Baton Rouge this year...

Pretty cool video with some great action.. Looks like you guys launched at Belle River Public Landing... Been hearing good things out of that area and in Bayou Black.. Thanks for sharing

Went last week, and the fish were biting good... However, lily pads were EVERYWHERE !!!

Hadn't heard anything about the bass, but I heard the sac a lait were biting if you can find good water... I was thinking about fishing Bayou Des Allemands, closer to Lake Salvador... I've always had good success chasing bass on that side... Good luck

I usually catch grass shrimp near the launch. It Takes about 5-10 mins, but they're free, always there, and worth their weigh in gold when fish are hitting on them

If they're not near the launch like in the video, I find a hydrila bed and rake them out of the grass bed. Good luck and good fishing

i would guess he's about 4.5 years old. Round stomach, fat sagging neck, and top notch rack. Just my guess

I prefer .45-70. Bought a H&R Handi Rifle in .45-70 for primitive hunting in LA and MS. I shoot Hornady LeverRevolution ammo at 325 grain loads,use a Nikon ProStaff 4x9x40 scope, and installed a Limbsaver Recoil pad. I love it, and Im accurate within 150 yrds. Try both and get whats best for you

I too hunt in Woodville, and Ive seen some unbelievable bucks taken out there. Hopefully I can harvest one comparable to yours this season. Congrats

That 8 point has the potential to be a monster buck if he could survive this season. However, if youre on public land I would definitely take him ASAP

So I was close without going over!!!

September 05, 2009 at 4:10pm
A comment titled: Hog Weight in response to a report titled: Guess the weight

ilaunched at Bayou Segnette Saturday and fished the Cataouche/ Salvador area without a single bite. Everybody is saying the Hurricane messed up the fishing, but every now and then I hear someone say that they limited out in the area. GO figure

Yeah I saw some pretty good prices there too. i bought a bow package from Dick for $365.00 and the same bow package was $459.99 at Cabelas and Bass Pro

October 11, 2008 at 5:36pm
A comment titled: Tangipahoa School Board in response to a report titled: Hunting management area

WHats the easiest way to walk into one of the school board tracts. I tried to find one but had no success

I tell my co-workers all the time that Hahnville grads are the best outdoorsmen in Louisiana. Good job guys.

i wish it was hens that you saw. I've been wanting to do some turkey hunting in Bonne Carre for a while now.

I have the Ruger M77 MarkII with the stainless steel barrel, and the lightweight synthetic stock. This rifle is ultralight, but shoots better than my Remington Model 700.I have my M77 in .30-06, and I cant wait to hunt with it

Just got a new .30-06 and a .270 and i would pay to hunt those hogs. Located in Baton Rouge, from St.Charles Parish, and would drive anywhere.

Love to hunt, fish, and anything outdoors.