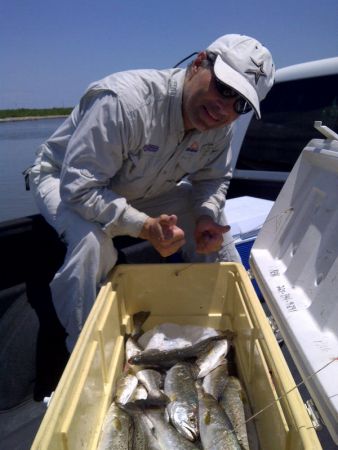 WARNING! The proposed lead ban is still alive for fishing although dead for hunting! Please take a minute to comment...unless you like big steel jigs that no fish will bite! See below from EPA and how to comment:

âAs there are no similar jurisdictional issues relating to the agency's authority over fishing sinkers, EPA â as required by law â will continue formally reviewing a second part the petition related to lead fishing sinkers.

âThose wishing to comment specifically on the fishing tackle issue can do so by visiting http://www.regulations.gov. EPA will consider comments that are submitted by September 15.â

Don't let EPA take your sinkers and jigs away!

EPA is considering a ban on lead bullets and fishing lures. Here's a link where you can comment on the regulation. http://www.examiner.com/gun-rights-in-phoenix/epa-considers-ban-on-traditional-ammunition

2. Consideration of Declaration of Emergency and Notice of Intent to Allow Recreational Fishing Including Recreational Charter Boat Guides in all State Waters

3. Consideration of Request to Appropriate Federal Agencies to Expedite the Opening of Closed Waters to Fishing

Back in August 2009 I paid on line for two toll fees and thought it worked fine...until I received two citations in the mail today! I tried calling the toll free number today to talk to them but it was busy.

Has anyone else experienced this problem? The citation said you can mail them proof of payment but I'd prefer to get some information before another submittal gets "lost" in the shuffle!

Yes - I have tried very very very hard not to ever hook a ladyfish ever again.

I've owned aluminum and fiberglass and I personally like fiberglass better, but there are advantages to both. Aluminum to me is far less TLC required. Some aluminum boats are nearly indestructible. But I think the ride of fiberglass is better and it does not get as hot as aluminum in the summer. That being said, if someone gave me a new Gravois tomorrow I would not say no! :-)

Another storm it will be gone. No sign of any restoration work anywhere along the coast at all...am I missing something?

That's the kind of fish kill I like to see! Good job.

All Star Rods. All I've fished with for years, they are great.

Nice haul! Hope you got your boat back.

Yes, they are there!

Posting water as private. Only in Louisiana. We have so much not to be proud of!

I don\'t think it is safe to fish in the surf in a kayak, but maybe you are just planning to wade fish?. Even if you are wade fishing you need to be very careful, there have been a couple of drownings recently. One of my co workers perished in the gulf in a kayak a few years ago. There are rogue waves that can come in even when it is slick calm due to all of the crew boats that run offshore. If you have to do it, whether wade fishing or kayak, please keep your life jacket on! All of that being said, the best bet is to fish around structure or where you see bait and clean water. Be careful and good luck! TT

If you don't have luck here, you may want to check fb marketplace.

It will be a challenge finding anything in that length for 20K that does not have issues, but I hope you get lucky!

There are reefs and islands behind Grand Isle that are good for trout fishing. Look for PVC poles marking the reefs.

I saw one in Belle Pass in Fourchon about 4 years ago in the summer. Heard it gulp air and know it was not a purpoise - got a good look at its tail as it dove. Did not see it again, but I'm sure it was a manatee.

West-southwest winds can mess that area up, unless it is very light.

One thirty, bill to be heard around two o clock

The bill heads to the House floor Tuesday April 17. There will be a support rally at the state capital at 200 pm. Please attend to demonstrated your support for the bill. If you are unable to attend, please contact the house representatives via email and phone to request their support of the bill.

Just found out that the opponents of the bill are trying to send the bill to the Natural Resources Committee instead of to the House floor. This is a back door way to steer the bill to a committee where opponents feel they have the votes to kill the bill.

Please contact your representative ASAP to strongly encourage the bill be sent for a floor vote ASAP. It has already passed committee fair and square, it should not be redirected just to kill it.

Below is a link to find your legislator's phone number.

Great news that the bill passed for fishermen! This is a huge victory.

Attendance at the meeting surely had to help - there were around 100 people there in favor of the bill.

Now the bill heads to the House floor.

Committee members in case you would like to call them:

If you want to try to help, Please plan to come to the hearing Tuesday April 11, 2018 at 930 down at the state capital. This is your chance to make your voice heard.

A few years ago, a similar bill was defeated in committee, very few people showed supporting the bill. I hope this time will be different.

If you don't have time to come, at least call the committee members to offer your support for the bill Monday.

These postings, tickets etc. are going to increase unless the law is changed! There are some powerful opponents against this bill, so a strong showing of support from the recreational fishermen is needed to get this bill out of committee to the House floor.