Easton Axis Arrows in response to a report titled:  arrows 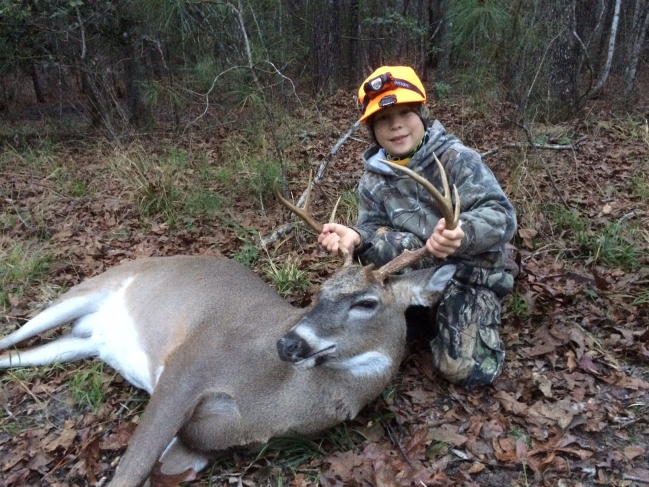 My 8 year son killed this 8pt in Alabama the evening of 1/3/16. We had perfect hunting weather and deer were moving. About 4:40pm my son said, Dad! There's a buck! He was sitting on my lap ready to shoot already because we had heard some rustling in the leaves. I looked and the buck was just standing on the edge of the food plot looking to see if any does were in the plot. I told him look at him and tell me what he is. He said its a 6 or 7 point! I said shoot him! He put a perfect shoulder shot! The deer went down right there! He got so emotional! It was one of the best hunts I ever had! Nothing like watching your son kill a deer! He turned out to be a nice 8pt and weighed 150lbs! Proud dad! 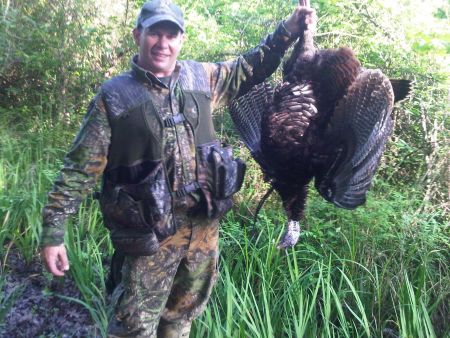 Killed my first Turkey Friday morning at my in-laws place. He weighed 20 lbs., 10 inch beard, and 1 in spurs. Not bad for the first turkey! Man that was fun!

Can anyone tell me if there is a place in the Denham Springs/ Baton Rouge area that sells bulk corn by the barrel? I remember seeing a post a while back saying there was a place where you can bring a barrel and they would fill up the barrel for you. Any information would be great! Thanks! 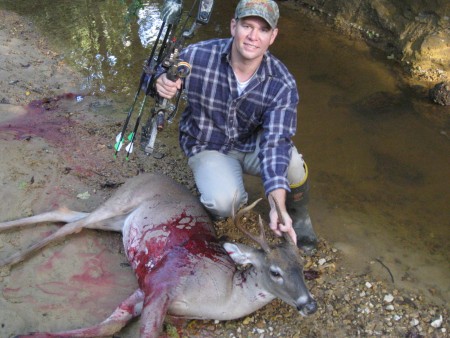 Killed my first deer of the season last weekend at the in-laws house on their 3 acres. This never gets old! Meat in the freezer! Muzzy did the job!

Made my first bow hunt of the year only to have it be miserable because of the mosquitoes. Now, I've hunted the marshes and swamps and never seen the mosquitoes quite this bad. They swarm you when your on the ground. Not just little ones. These big ole nasty mosquitoes that are about a 1/2 inch long! They take a chunk our of you when they bite! I felt like a buffet for the mosquitoes walking to and from the stand. We couldnt even stay on the porch at the camp during the day without them attacking you! If it wasnt for my thermocell, I wouldn't of made my hunts. What a life saver. Has anyone noticed the mosquitoes worse than usual this year? I guess all this rain has really awaken them up. I think I will wait until it gets cooler to hunt again. The worse part I didnt even see anything! 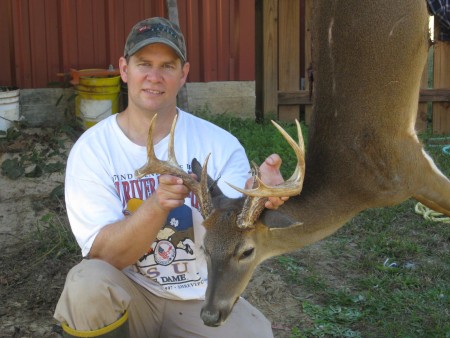 I went fishing for the first time in the Manchac Area on Saturday and I seen a bunch of boats tied up to the I55 bridge in the pass where Lake Maurepas goes to Lake Pontchartrain fishing on the bottom. I was wondering if anyone knows what they were catching? I didnt see anyone pull in anything but I didnt stop long enough to notice. Just curious.

I have a Mathews Switchback XT 70 lbs and 28in draw. I shoot the Easton Axis 400's and have no problem. They shoot great with my setup and give me good penetration with them. I would recommend trying those out.

April 28, 2011 at 3:34pm
A comment titled: It Does Work! If there is a buck in the area! in response to a report titled: Anyone else with great success using Primo Doe Cans?

I killed the biggest deer to the day with the can. I borrowed my dad's can one morning and then about 8:30, I heard a deer grunt. I hit the can again twice and he grunted back and came running into me. He made a mistake. He was a good 10 point. Now, I havent had any luck with it since, but my cousin this past weekend got a deer to come in using it. He heard a grunt behind him and hit the can and the deer came in and killed him. So, I believe if a buck that is crusing for does is in the area, he will come in if he hears it. It worked for me once and killed my best buck. So you never know. If the rut is on, use the can! I'll be using it this weekend!

I like to make a coot stew simular to a deer stew. Filet the breast and clean the gizzards. Then season them up with the seasonings you like (tonys, garlic powder, ect). Add in a 1/2 cup of cut up onions, celary, and mixed seasonings. 1 can of diced tomatoes. 1 can of cream of mushroom soup. 1 pack of Lipton's Onion dry soup mix. Add some frozen mixed vegatables and cook in the crock pot for 8 hours! Serve over rice! Good stuff!

November 12, 2009 at 8:27am
A comment titled: Spreader in response to a report titled: ATV spreader

I bought a Moultrie spreader for about $100 at Bass Pro and it works fine. I've had no problems with it and it is easy to put on. 2 downfalls. It only holds 50bls at a time and doesnt come with a cigarette plug in for the 4 wheeler. So bought the adaptor and put it on myself. Other than that, it works fine for me.

I hear you guys. They were so bad I didnt even fill my feeders up because I didnt want to go back in the woods! Deer gonna have to find their own food for a little while! I dont know how those animals make it out there! I think I lost a pint of blood this weekend.....

I have 3 pin Vital Bow Gear sight. The pins are really bright and I can see them late in the evening and early in the morning. It cost me about $90.

I shoot the 3 inch Remington Slugger out of my 870 with an Improved Cylinder choke. That slug is made for round barrels and is very accurate. I can aim dead on at 60 yards and hit where i'm aiming. At 80 yards I have to aim about 6 inches high to hit dead on. I killed plenty deer with that slug. They arent expensive either. Good Luck!

I know how yall feel. We've been having a lease now for 4 years off of hwy 1088. The bucks we gotten on camera have mostly been at night. I have gotten one or 2 during the day but it has always been after 9am. We killed 3 does and a 4pt so far. We only have 5 members on 400 acres. All the deer we killed so far have been after 9am. The deer I have seen this year have been either right at dark when you can barely see, or at 10am. Try hunting more during the mid day. We are seeing more deer like that this year. The only buck I seen during the day was 2 years ago on right at daylight on a foggy cold morning and I missed him. But the bucks here are definatly hard to kill bc they move mostly at night. Have yall been seening any ground scrapes or rubs? We haven't found one yet.

My hardest drag was on Jan 9, 2005 on the Jean Laffite State Park. If you ever hunted there or hunted marsh before you know what I'm talking about. I was by myself that morning and my cell phone got wet and couldnt call anyone. I killed a 10pt that weighed 180lbs and had a 17in inside spread. (He felt like 280lbs after the drag) The way we get back there is we take the mud boat into the parkland and then pattle up the tra-naus about a mile. Then I walk to my stand about 500 yards in in the marsh into some cydia trees. It took me 2 hours to drag him to the pirouge. I considered myself in pretty good shape then, but by the time I finished dragging him to the pirouge, I had a hard time getting him in the pirouge from being tired! But I was still pumped up and managed to get him in, paddle back a mile, and drag him into the mudboat! I was wore out but worth it to me!

I have a club north a Lacombe and we've been hunting it now for a our 4th year. I have plenty of deer on camera at night as well. I have a deer that is about a 140 class on camera that I've been hunting for 3 years and just cant seem to catch a break. I have him mostly at night but I have caught him a few times during the day. Just no one was there when he was there. We have killed a few bucks during the day. Just have to be lucky. I do feel your pain though. This is probably the hardest place I've ever hunted. But they are there. We killed 2 does opening morning with 4 of us hunting. Both were killed after 9am. So try hunting more during the middle of the day. The bucks we killed were either right at daylight or after 9am. Also, try hunting in the woods on deer trails. Throw a little corn to get them to keep traveling that trail. I have found that to work better for seeing deer during the day.

November 21, 2008 at 7:31pm
A comment titled: Not Much Ducks! in response to a report titled: low numbers at Salvador WMA

We didnt fair much better with the ducks either. We did kill our limit of pouldoo both days. Only killed 4 teal opening morning and 1 teal Sunday morning. Sunday morning we only seen one flock of wigeons come over real high and the one teal that came in we killed. That is probably the worse opening morning with duck kill we had in years. I sure hope these fronts push somemore down.

We hunt just south of Hwy 36 off of Hwy 1088 between Fish Hachery Road and Beaver Ball road. Where is Snake Creek Hunting Club? Just wondering if you are in the club next to ours. We'll keep an eye out for this guy. How are yall doing so far this year?

Marsh Hunter has not filled this section yet.