Can anyone tell me if old river in Deer Park is public for hunting/fishing. Moving camper by Richard K Yancey wma for next hunting season and wondering if I can fish and possibly duck hunt old river next season. 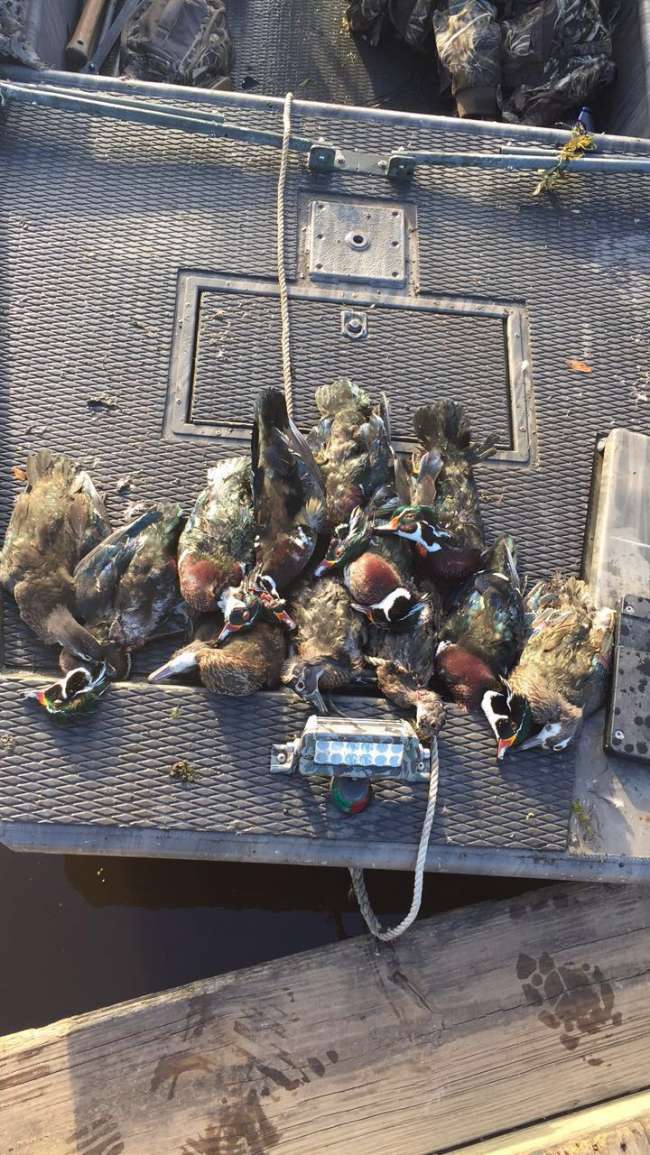 4 man limit of woodies killed in the 2016-17 season. Have found a few wood duck holes but never any big ducks, would be nice to find some areas to kill teal or big ducks out there.

Does anyone know of someone who works on gator tail motors close to the prairieville/Gonzales area? On an afternoon hunt today my buddy's gator tail sounded like it was running out of gas then started making a clanking noise he has a video of it running with the clanking noise on our way in. Any help appreciated his name is Chandler if you know anyone who can work on it 225-202-1180 thanks

Has anyone ever seen or killed any hogs in maurepaus swamp wma near the st James area? Just curious if they're out there.

Hunted the south farm Saturday morning killed one teal between 3 hunters. Lots of big groups out there after scouting Friday afternoon thought it would be a great opener but it wasn't, saw some large flocks Saturday morning but only had one come in and there wasn't very much shooting for the amount of people out there. Went again this morning and only about 6 groups total out there and maybe 15 shots fired all morning, killed 2 between 3 hunters and saw no big flocks at all. Anyone do any better? 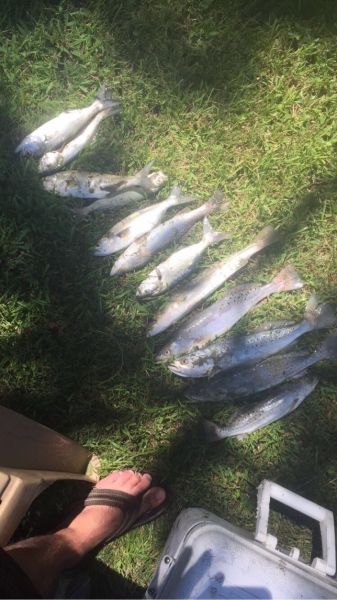 Fished elmers island this morning caught 6 specks and 5 white trout all on live shrimp the bite died down fast. Waded a couple hundred yards out on the eastern side of the island with two buddies trying to pick up some more specks around 10:30, I tied the bait bucket to my shorts with a string and after both of my friends lost they're shrimp I was trying to grab a couple out of the bucket for them and when I glanced up there was about a 3 and a half foot shark about 2 feet away coming directly towards me at a fast pace, I had just enough time to yell at my buddy's and jab the shark with the bottom of my pole! The shark veered off as soon as I hit it but needless to say it scared the hell out of me! So we ran back to shore and moved down the coast a couple hundred yards and were fishing on another sandbar in about 6 inches of water when another shark being about 4 to 5 feet long was heading towards one of my buddy's when he spotted it about 20 yards away from himself so he hollered and we all hauled ass back to shore once again! I've never even seen any sharks in the water before at elmers island other than the ones being caught by other fisherman, it was an eventful day to say the least. Yall be safe out there!

cant believe they let the lease go for Union wma! Killed my first deer there 10 years ago and my most recent last year there! Best chances at getting a deer on a wma in the state in my opinion always worth the drive from Gonzales! Anyone else going to miss Union ?

Yea we are moving our camper to three rivers campground itÃ¢â¬â ¢s a nice place has shooting range, a cleaning station with lights, water, electricity and all that. 1500$ a year plus monthly utilities. Would really like to look into hunting old river next year guess IÃ¢â¬â ¢ll have to go check it out in person this summer.

I gotcha, well thatÃ¢â¬â ¢s good IÃ¢â¬â ¢ve never walked the woods behind the hwy 16 launch. Have yÃ¢â¬â ¢all ever killed anything other than woodies or teal? I always launch at st James boat club when I duck hunt maurepas. This is a pic of a 4 man limit of woodies we killed two years ago out there, went back the next Weekend and the water came up and didnÃ¢â¬â ¢t kill a bird.

The boat launch at the end of king George road is private land just an fyi, I do a little deer hunting back there from time to time. IÃ¢â¬â ¢ve always wanted to go scout back there for duck holes but didnÃ¢â¬â ¢t know where to launch. IÃ¢â¬â ¢ve done a lot of hunting in maurepas swamp and have only killed wood ducks, I did see a blue wing teal out there while squirrel hunting in maurepas swamp a couple weeks ago, would be awesome to go shoot teal and woodies out there. Wish the mallards would come back to that swamp like the glory days IÃ¢â¬â ¢ve heard about out there.

IÃ¢â¬â ¢ve heard rumors of people getting on mallards and grays in Maurepas swamp the past few years I just canÃ¢â¬â ¢t find any myself. Keep trying to find some public land mallards guess IÃ¢â¬â ¢ll just keep heading further north until I find them!

Thought I recognized that hole yÃ¢â¬â ¢all are in; if itÃ¢â¬â ¢s the same one IÃ¢â¬â ¢m thinking of I hunted it about 3 weeks ago and we shot one wood duck. We were the first ones out there that morning and some guys came in after and I told them to go try the next best hole I knew of back there and they ended up killing a bunch of greys, just the way it goes!

IÃ¢â¬â ¢ve been hunting up there two seasons now and havenÃ¢â¬â ¢t gotten on any mallards yet, IÃ¢â¬â ¢ve hunted the silver lakes and the waterfowl impoundment. Guess I need to try the flooded timber by the river

IÃ¢â¬â ¢ve been reading all of apex predators articles and watching all of his videos for years now and personally look up to the guy, I donÃ¢â¬â ¢t know anyone else that puts in as much work as he does hunting. IÃ¢â¬â ¢ve been hunting public land since I was nine years old and know how hard it is, canÃ¢â¬â ¢t be mad at him for putting in the work it takes to be extremely successful on public land I think he deserves every kill he gets!

Look into the horse power restricted areas in point aux chene, perfect for your set up

I hunt solely out of my kayak, unless I get invited to hunt out of a boat every now and then which is rare. I have an 8 foot sit on top which is pretty small for me because I am 6'1 and with a dozen decoys, gun and me weighing 195 plus waders I sit pretty low in the water I plan on moving up to a 10 or 12 foot soon. If you don't mind paddling Its a great way to hunt I think, I hunt in Sherburne wma down section 120 and have shot 3 ducks in about 10-12 hunts this year it's been bad. Sunday me and a buddy took our kayaks to the limited access area in point aux chene for the first time and it was nice down there plan on going mor next season, one of my fins on my paddle broke off while we were a mile back there and I had to paddle back with half of my kayak paddle into a the wind which wasn't easy but it was a good workout! I would suggest a 10-12 foot sit on top kayak you can bring a lot more with you on the sit on top. You will be surprised how far you can paddle when your pumped up to kill ducks!

That's an amazing deer for anywhere but to kill that in Sherburne out of all places is truly impressive! Congratulations!!

A buddy and I hunted the south farm Yestetday morning and I asked a warden there what the deal was with 120 and he said you can not turn off of 975 onto any road in the wma before 4am, which I agree is a horrible rule I hunt in section 120 out of my kayak I always wait for 4 am to launch but boat races back there and me in a kayak probably won't turn out in my favor.... We didn't fire a shot on the south farm neither did the group next to us, saw some groups real high that was it.

What area is the prairie that your talking about is that the open marsh looking area on the right side boat launch? I paddled back there last year in my kayak and it was all grass what looked like a marsh area on google earth.

You can pretty much see all the open holes on Google earth i haven't found any honey holes that can't be seen on Google earth it's just who's willing to wake up early enough and get there first!

I'm hell bent on killing some mallards this year all I've killed is woodies, greys, and teal I'm trying to find some mallards that's why I want to start hunting other places especially up north.

I hunted the lottery last year at south farm with two of my buddy's and everytime we started working some ducks they would drop down to come in to us and the guys a couple hundred yards away would shoot them they killed about 10 mallards and we shot one teal, it sucked. But I'll be out there this year going to try it again especially late season, goodluck to you

I'm sure there's just as many people just looks like there are more options to scout at Yancey and Dewey wills, everyone knows every hole in Sherburne and it's just a race to them.. Plus haven't been seeing many birds at all yet.

No problem, just be ready for the crowds at Sherburne people will sleep with they're boats backed up to the launch out there or be sitting in the holes at 2 am. I'm about to start going north to Richard k Yancey and Dewey wills to try and find new places to duck hunt hopefully the drive will be worth it I just hunt out of my kayak or walk in. A lot less people in Thistlewaite though!

I've never come across any waterways on the east road. I honestly have no idea where any of the duck hunters go in thistlewaite theres just not enough water. I started hunting Sherburne for ducks last year more options out there.

I've been hunting down east road past 3-4 seasons, used to hunt down Peckham Rd and thistlewaite Rd a little past the bridge on the right, done best down east road.

I personally like when there's a lot of people walking around in thistlewaite, the more people the better hunting is how it's always been for me over there. I've killed 3 deer out of thistlewaite and always saw more and had better luck when there was more people moving around!

Quackquackboom96 has not filled this section yet.