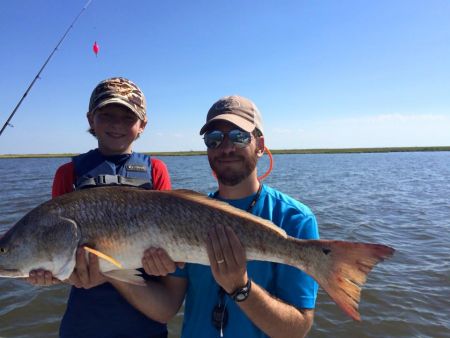 I usually fish Delacroix, but fishing Hopedale this weekend with my son. If I get skunked fishing nearby, I want to journey back to familiar waters as my backup. What's the best path in a 19' CC least likely to leave me stuck on bottom? (I have a push Pole just in case ;) 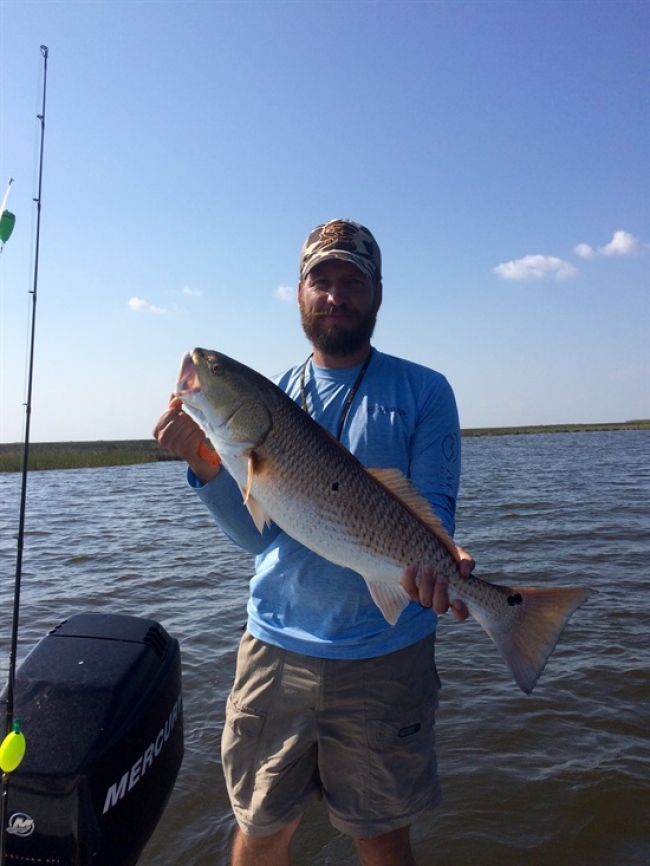 From reading the reports it seemed as if the Reds were everywhere lately, but we fished hard for 12h Saturday. We caught a bunch of rat reds and a couple trout, but finally in the last hour of jumping around found them in lake Robin. We put 5 upper slots in the boat in that last hour.

Taking my son and several buddies out of Sweetwater next weekend. I've got plenty of spots to catch some for the table inside, but a few have never caught a red, so I would love to put them on a few bulls. This time of year should I head out to the bay or stick to passes inside if trying to hook up with some bulls? Thanks,

Had a surprise free weekend and taking my son fishing. The Rodeo has everything booked up. Hail Mary here, but does anybody have a room available for this friday and saturday near Delacroix, Hopedale, Shell Beach etc?

Is Delacroix a zoo during the rodeo? I was hoping to head down for the weekend, but afraid the ramp will be ridiculous. It would be fun to be part of all of the excitement though.

Yall school me on going north out of Delacroix? I have always fished south. As far north as I've been is Lake Robin. Mostly, just tell me where not to go. I don't want to spend my weekend sitting on a mud flat ;)

Word is the marsh is full of freshwater today. What do y'all think this weekend is looking like?

What path does the pencil canal take from little lake to Oak river? I know where the sign is at the south east end and have fished around it many times, but never ventured to Oak river that way. I have gone in from Big lake and Twin pipeline.

Now I see why I can't find a room for 100mi. Is it a zoo in Delacroix and/or Hopedale opening weekend of Duck season?

I always stay with Freddy Dietz, but he is booked up in a few weeks when I want to go and so is everybody else. Any suggestions? I have called: Freddy, Sweetwater, Delacroix Lodge.

Looking at some property with a pretty nice 4 stall covered dock with lifts. Since I would be self insuring, I'm trying to gauge how much risk I have in the event of a hurricane wiping it out.

What's a ballpark idea on how much it would cost to build a 4-5 slip covered dock with lifts? Thanks

Caught thousands of specs, but never trolled for them. Are you just pulling a jig under a bobber with a jig?

Since reds don't seem to care if shrimp is dead or alive, is it cheaper to buy shrimp at the grocery store?

My transducer on my Lowrance HDS-7 went kaput. It now only tells me the depth when it wants to. What's the best transducer for fishing mostly in the marsh? I primarily just use the depth fonder to find holes and drop offs.

I fish mostly out of Delacroix. What's your favorite mapping card? I have a Lowrance 7hdi without the touch screen. Currently I just use the prepackaged map card, but I've seen you guys mention some of the other cards. Thanks,

Fished Delacroix and looked like most everybody struggled. We did not put a fish in the boat, even our go to places did not produce fish. If you got even remotely off the beaten path, you got to spend the next few minutes cleaning out the water pump.

If the water is calm enough tomorrow, with this dirty water, I'm thinking about running out to the rigs around stone island To see if we can get on some Bulls. Anybody been out there after reds in the last week?

With all of the rain the last few days, how did it disrupt or help the fishing for this weekend out of Delacroix? 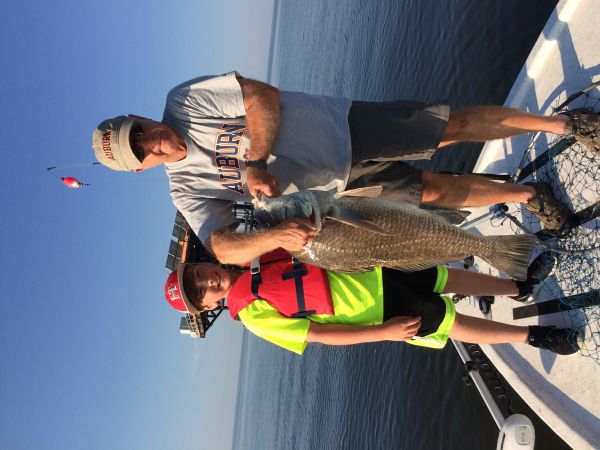 After putting the boys on some big bull reds yesterday, we decided to hit up the rigs for trout. The water barely had any ripples it was so calm. We caught several trout and my sons buddy got himself a surprise monster drum. 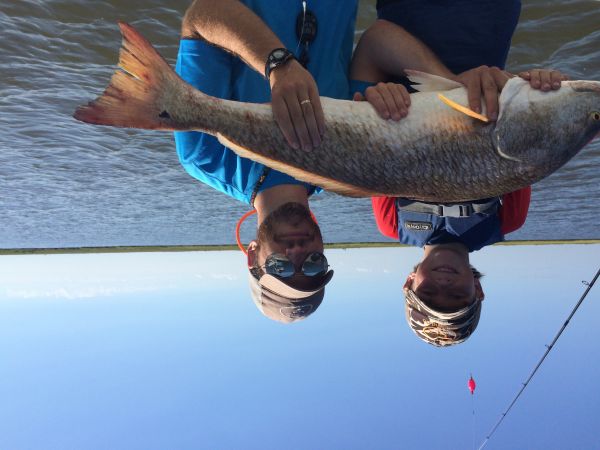 My goal today was quality over quantity. It ended up being both!! My 12yo and his buddy wanted to get on a bull Red. With the water like a bathtub in black bay, the stars aligned and we put several big boys in the boat. We also caught a black drum that weighed almost 40lb. My son and his friends dad caught most of them. We are going out tomorrow to see if we can't put his buddy on one.

What kind of fishing do you plan to do and where? Do you need a shallow draft or deeper V to cut through some chop?

That's awesome! You can tell how much fun they are having.

Thanks guys. I fish Robin a good bit coming from the Delacroix side, so I should be good from there. To get to Robin from Hopedale Marina, is my best route the red, blue, or does not matter? I can run skinny, but hate getting stuck. ;)

Where on the marsh? Redfish or Trout? Fish out of Delacroix and you can load the boat with that rig not too far from sweetwater.

Gold spoons
Popping corks (versamax)
Plenty of jig heads
Matrix jig bodies
Push pole if you are like me and push the limits on depth.

Glad I'm not the only one who likes to get stuck. My push pole comes in handy for my stupidity quite often.

Man that gold one is gorgeous!

Gulp, live shrimp, or matrix. If you have a N wind the marsh will be shallow. I have a telescoping push pole I picked up from Bass Pro that has come in handy several times when I'm sitting on the bottom.

Sunday, I found literally 100+ reds packed up in a pond but could not get them to bite anything. We did almost dip net one that ran itself up on dry ground just to help it back in the water, but it finally got back in.

Any suggestions on getting them to bite when they are turned off?

Cold, windy, muddy, low water, just down right miserable. If you are flexible, stay home. I'm not, so I thought why not give it a go.

Might could go out to mazambique or even out in black bay/stone island, but with 12mph wind it will be rough.

Probably going to be a tough weekend with the water conditions. :(

I'm heading down this weekend too. I'm hoping we will be on the back side of the front and they will be biting.

Put in at sweetwater and they can point you to some areas that traditionally hold fish.

Thanks guys. With the N wind this weekend, I didn't figure it would be a good time to get off the beaten path.

691 views and nobody has tried to fish opening day of duck season and has an opinion?

Great story! I bet that was a blast!

Look for the other boats and run right up in the middle of them. That's where you will find the trout ;)

I can't speak for the rooms, but I have had nothing but positive experiences with Sweetwater Marina. Cost is based on convenience and supply/demand. There are not a lot of other options that far away from civilization. You could get ice/fuel/bait cheaper if you don't mind driving 40 min into town and back. My suggestion is to take some of these issues up with the owners before negative review online. Just my $0.02 as a business owner.

Grew up fishing Steinhatchee, FL, but nothing compares to the redfishing in LA.