I bought my boat new with a Lowrance Elite 7 DSI with transducer mounted in the hull. I recently upgraded to the HDS 7 Gen3. I was told that if the transducer had the blue connectors it would work. I have no information on what transducer is in my boat, from what I have read it was a 83/200. After I connected the new HDS 7 I selected the Generic 83/200 transducer from menu an everything worked. On my first trip out , about 3 hours into fishing I noticed that my sonar wasn't working anymore, trouble shot it and figured that the unit was bas. Sent it to Lowrance and they said its 'XDCR isn't working due an electrical damage (sonar microcontroller damaged)' and are replacing the unit. I was wondering if I selected the wrong transducer from menu that fried the unit? How can I find out for sure what Transducer is in my boat? I look at transducer and no markings and cable is tagged. Any help would be appreciated! Thanks 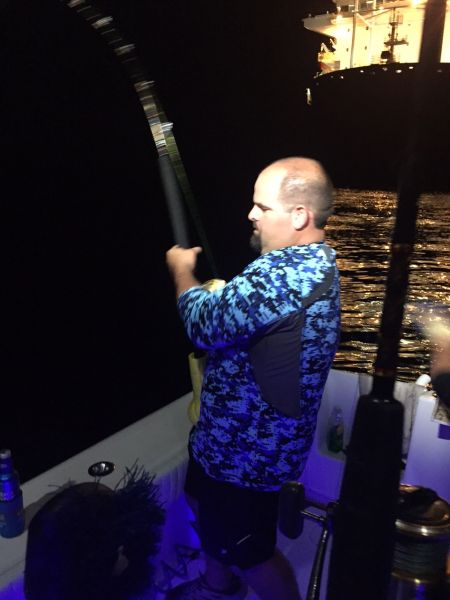 On Friday Sept. 4 we headed out of Fourchon in hunt for the elusive Yellow fin Tuna. Before reaching out destination we has schools of tuna jumping all around and feeding. We set a drift and couldn't get the close enough to get one on the line. So we took off bound for our original destination, got there right at dark and the action started right away. We landed two in the 40-50lb range, but lets not forget that Capt. John gaffed the second fish while it was still green and it jerked it out his hands like a purse snatcher. So there we are fighting a 50lb yellowfin with only a 3' gaff left in the boat. We managed to get him in. A few minutes later we hook another one, and this one was a screamer!!! It pulled drag for the first 30 minutes without letting up. Finally was able to turn him and work him to the boat. So we taught... In the mean time we knew it was a big fish, and we trying to figure out how we were going to get him in the boat with the lil popcorn gaff we had. We were in contact with another boat in the area throughout the night (Freedom). The Freedom called over to us and said he had just landed one about 140lbs, told him we had a nice one on and asked if he had an extra gaff we could borrow. Without hesitation he maneuvered the boat over to us (while still fighting the fish) and handed us a gaff. Many thanks go out to the crew and fisherman aboard the Freedom. Well after 2 1/2 hours of battling this fish we were finally able to stick a gaff in him and bring him aboard. After 15 minutes of celebrating and hi-fives it was time to get back to fishing. It was 12:30 am at this point,we set back up and nothing was biting. We left location an traveled about 2 miles to a different spot and all we were catching was blackfin, we kept a few of the bigger ones and kept some for bait as well. Told the guys that I wanted to go back to the other location for 3:00am, because I just knew that the bite was going to be back on. At 3:15am we set back up and it was on like Donkey Kong!!! 15-30 seconds after setting your line out you had a fish on. At one point we had 3 on at once. We ended the night with 12 yellowfin and some blackfin. Didn't get our limit of Yellowfin only because we were out of room in the boat. Overall it was a great trip! 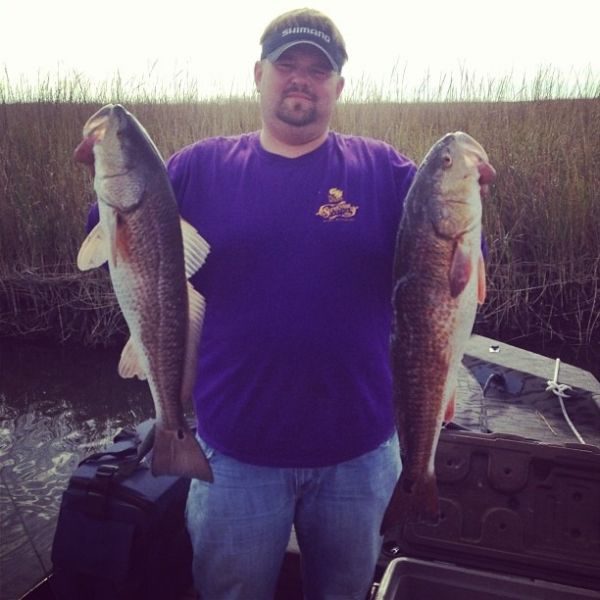 Fished Monday and nailed them again. Ended up with 50 specks and 2 reds. Caught the specks on Vudu Shrimp. Waited for the tide to start comming in around 11am and the bite was on. The reds were swimming the banks, threw out a Top Dog and water just exploded. Wish I could hit it again today! 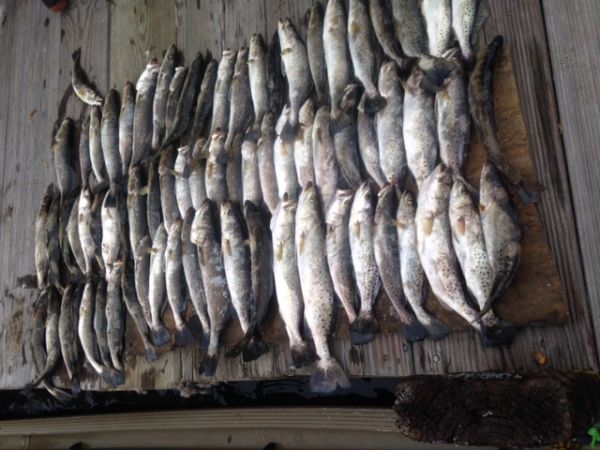 We left the camp at 6:00am and fished a cut that had some moving water. We were throwing D.O.A. and Vudu shrimp about 18' under a poping cork. I still have mixed feelings about the Vudu shrimp. One hook broke clean off only leaving me with the lead weight. I also hooked a red and it pretty much straightened out my hook. But all in all we had a great trip!

Didn't think it would, but figured I'd ask.

the connections are the same, but I have 35 different transducers I can pick from the menu. I did not get with Lowrance on this yet, figured I'd try here first.

you should have kept on reading, there are exceptions.

I just purchased the Standard Mapping LA1 card, I love it so far!

I have known and fished with Captin Ed Pitre dating back to Jr. high school. It is hard for me to sit here and read these comments with hearing his side of the story. My family has also ran a charter boat business. When we say it is too rough to go out, it's rough. You will still have those weekend warrior crews that want to go out anyways. So before you go on bashing him and his company, lets have a little respect and see what he has to say about it. For all we know is that whoever made this report could be lying and starting rumors.

We have been heading West, towards Brutus, Shenzi, Neptune, Marco Polo area.

Good job bro! I bought the new Vudu with bigger hooks this morning, will give them another shot!

I went to Walmart this morning and check out the Vudu, I did notice the bigger hooks so I went ahead and bought another pack. Going to give them another shot! Thanks!!

I had the same problem with the springs on my 4x4. The easiest thing to do is to replace the springs with the 3/4 ton springs. The ride didn't change, I could load it up and go. It raised the back a few inches but nothing a leveling kit can't fix. You can go the airbag route but not sure if you want to drop that much money into your truck, plus with them leaking and other problems. Just my opinion. I ordered mine from 4 wheel parts wholesalers, they had the best price. The number is 1-800-489-1234

We use pyramid traps in our pond, seems to work really well

PLAY-SANCE has not filled this section yet.