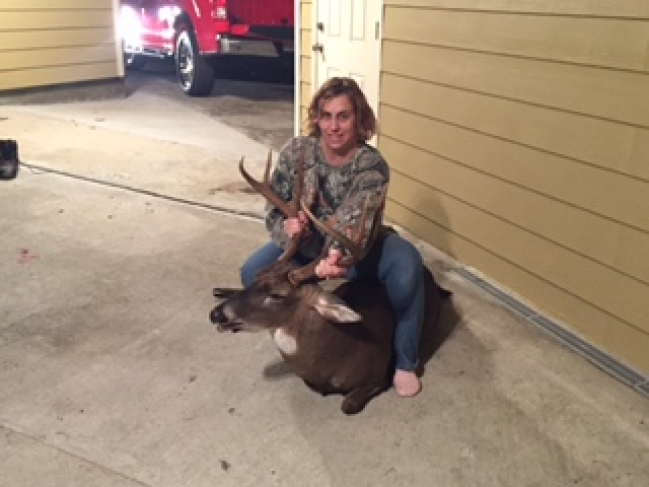 This year we found a new spot to try our luck since our two others spots weren't paying off and the deer seemed to moved on. We had found and saw some new scrapes and lots of fresh deer tracks. One of those tracks stood out and really got our attention so we knew there was a good buck in there. We had only hunted this spot three times in the evenings after work and had only seen one doe right at dusk on one of those evenings. On the evening of January 3rd after an unsuccessful start to our hunting weekend, I jokingly said to my fiance,'Let's go get 'Bullwinkle!'. We got there at our usual evening time. At around 5:10, a doe came out and I told my fiance to keep her eyes open for a buck. Not five minutes later I spotted the big buck behind the doe and told my fiance 'That's him, that's the big buck.' I then picked up my gun and put the cross hairs on the deer and then I was sure it was him. I looked back at my fiance and asked her if she wanted to shoot but she said, 'No, you shoot him.' So, I took the shot and he dropped so I knew I had hit him. But he got back up and ran into the woods. We let him sit for about an hour and a half and began tracking him. We had good blood and started following the blood trail and about 30 yards into the woods, we jumped him. So I asked my good friend that was helping me if we should continue or back out till the next day. We decided to continue and after about another 20 yards, I spotted him bedded down in the thicket and took a final shot. I was in shock and speechless but at that moment I thanked the Lord for giving me the opportunity to take such a great animal.

omargirona has not filled this section yet.