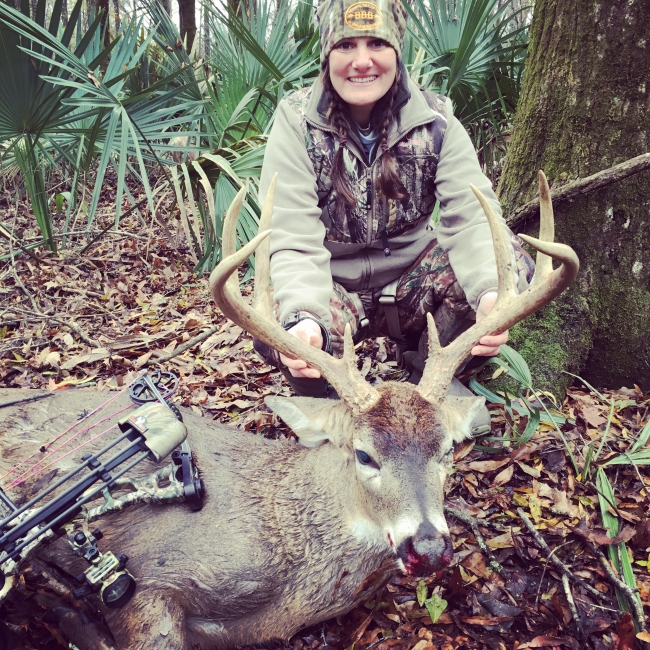 I have been an avid hunter for years. I grew up hunting with my brothers. Always had a strong passion for deer hunting. In 2010 I decided to start bow hunting and quickly got suckered in the adrenaline filled sport. For the last few years I have been hunting hard to try and harvest my first buck. I even made a few trips out of state to get the job done. Our family farm in Whiteville, La is hard hunting with a bow. I have not even killed a doe there yet but I am still trying. A good friend let me hunt do some hunting in Tensas parish this year. Since the season started in October I go every chance I get. I decided when the season started that I wouldn't put my bow down this year till I got one. My rifle was staying put in it's case. Everyone keeps telling me I was crazy because I have seen a number of buck that I would have killed if I were rifle hunting. On the morning of January 23 a crisp cold clear Saturday morning I had the chance to go hunt with my friend again. I knew with the cold the deer would be moving and the rut was still going on. I climbed up in the stand about 6 am. I was more layered than normal so was a little nervous about pulling my bow back but more or less knew it was a mental thing. At 7:30 AM I saw a good buck rubbing a tree about 80 yards from me. From what I can see he looked like a good buck that I needed another look at. I decided to give my grunt call a few soft blows and just as I did he headed my way. He made his was straight to my tree. As he got closer I realized he wasn't as mature as I thought he needed to be so I let him walk. I could hear some chasing going on not far from me so I knew there must be a hot doe in the area. About 10 minutes later I saw another buck. He was a small 7 point and he was headed towards all the commotion. I thought well this is good the bucks are moving. Just a little after 8AM I got a glimpse of my buck. He was about 80 yards out. I knew right away he was a shooter. I quickly grabbed my bow and got ready for a shot hoping he would come down the trail to my right to give me a 20 yard broadside shot. He started down the trail and my heart started pounding. Then about 30 yards from me he headed straight to my tree. Walking directly to me I knew the only shot I had would be right when he passed me. The only problem was I only had about 10 yards behind me to my left and then I wouldn't have a shot. I knew I would have to shot almost under me. I hadn't taken a shot like this before. I drew back and asked God to guide my shot. He briskly walked right under me and about 6 yards past me I sounded off a small 'meaaa'. He stopped and turned towards me. I settled in and let it fly. As he took off he ran about 20 yards and stopped. When he stopped I could see about half my arrow sticking out. This made me extremely nervous. He then took off and ran about another 20 or 30 yards through the thick palmettos when I saw a white flash and the sound of the crashing palmettos stop. I was pretty confident he went down and quickly did a few fist pumps when excitement rushed over me. I text my friend and he told me to hold tight we were going to give him some time. After replaying everything in my head I became nervous about the shot. My friend told me there probably wouldn't be much blood because there was not exit wound. I just kept saying 'God please let this deer be dead.' About 20 minutes after I shot a couple smaller bucks made there way under me. It helped keep my mind off what had just happened for about a minute. My friend made it to my tree about 9AM. He quickly found blood on the palmettos right where I shot. He turned and said we will find this deer that's a great sign. We trailed him for about 50-60 yards and there he was. It was so overwhelming. I finally did it. After 5 season of hunting with my bow. Persistence pays off.

Jen14bull has not filled this section yet.