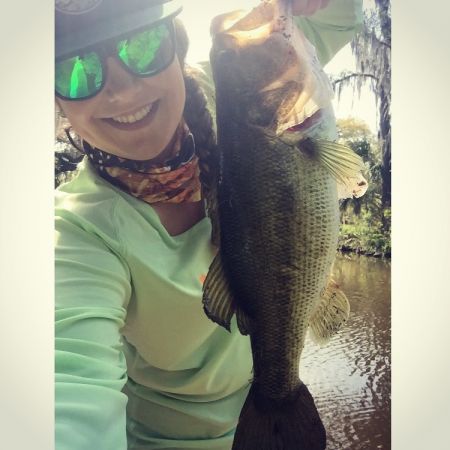 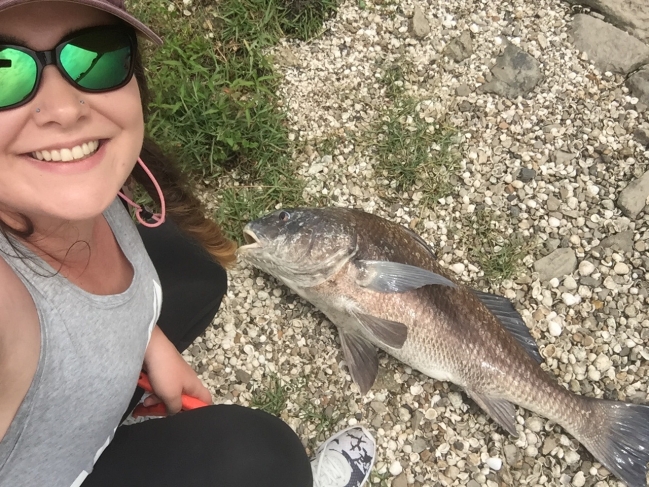 Monday, I had the day to myself so I went fishing from the bank at Lake Ponchatrain in my favorite spot. I&#039;ve never gotten any big fish out there except some gaspergou, 5 foot gar, and a 24&#039; redfish my boyfriend caught with a vortex matrix. I caught a crab while fishing for perch, instantly cracked him open and threw him out on the bottom. Within 10 mins my rod almost got pulled into the water. I fought this black drum for about 15 mins, almost getting him in, then taking off full speed. I&#039;ve caught big black drum before, but nothing was like this guy! Something took my other half of crab, and he broke me off after 5 mins. So I threw out my last few pieces of shrimp, not even 5 mins later, my drag starts ripping, and I FINALLY, finally got me a redfish bigger than 18&#039;! He was 29&#039; frozen! It was one of the best feelings, since I&#039;ve been after the big boys for two years now but just always had the worst of luck with the redfish, in particular. I&#039;m sure you can guess what I did with that delicious beast.

It was a good day for me, finally.

Does anyone happen to know if we have any womens fishing clubs, or tournaments that women can be a co-angler on someones boat? (currently boat less) Preferably bass fishing. Around New Orleans area.

Please help me out!

Also, I started a small bass bank fishing tournament with my friends, we've done two so far at City Park New Orleans, and our third is in Baton Rouge. I plan them once a month. Would anyone be interested in these tournaments? - As of now, there are no prizes, just bragging rights, until we grow and we hope to get more serious with it. Shoot me a message or reply to the thread, it would be pretty cool to get more people together for these!

Not sure where to find that info other than here. Any feedback would be appreciated!

Is there anywhere in the New Orleans/ Metairie/ Westbank area that sells live shrimp?

Thank you! It sure does feel good! When I saw that blue tail come out the water, my jaw dropped.

Great fish! Keep it up!

Fisherman, I believe you can take fish from City Park, but I wouldn't recommend taking a bass, considering the size of the ecosystem and the fact that bass fishing is more of a sport. (my friend actually ate some bass from the park, and he said it didn't taste right, and maybe that can go for all the fish out there) But, I can't stop you if you want to.

Bigzee, no problem. Down Marconi is also a good spot, just keep an eye out for any and all bodies of water. Some spots are hidden and ducked off, and those are the great spots.

Everywhere, honestly. These ponds are LOADED with bass, but they may be a little finicky since the rodeo was Saturday. Try all around Morning Call, especially behind. And around scouts island. Really, you should just look up a map of the park and scope it out for yourself. There's PLENTY of spots, I can't give you my exact spots, that's not very bass-fisherman of me. Good luck!

Also, what are you fishing for? Bass, perch, or catfish?

City Park is my favorite right now. Definitely give it a shot! They are a little finicky since it's pressured, but you should be ok. Be sure to look the park up on a map and try to find not so obvious spots! It's a HUGE park, make sure you scope it out!

Thank you so much! I really appreciate it

Born and raised on the westbank