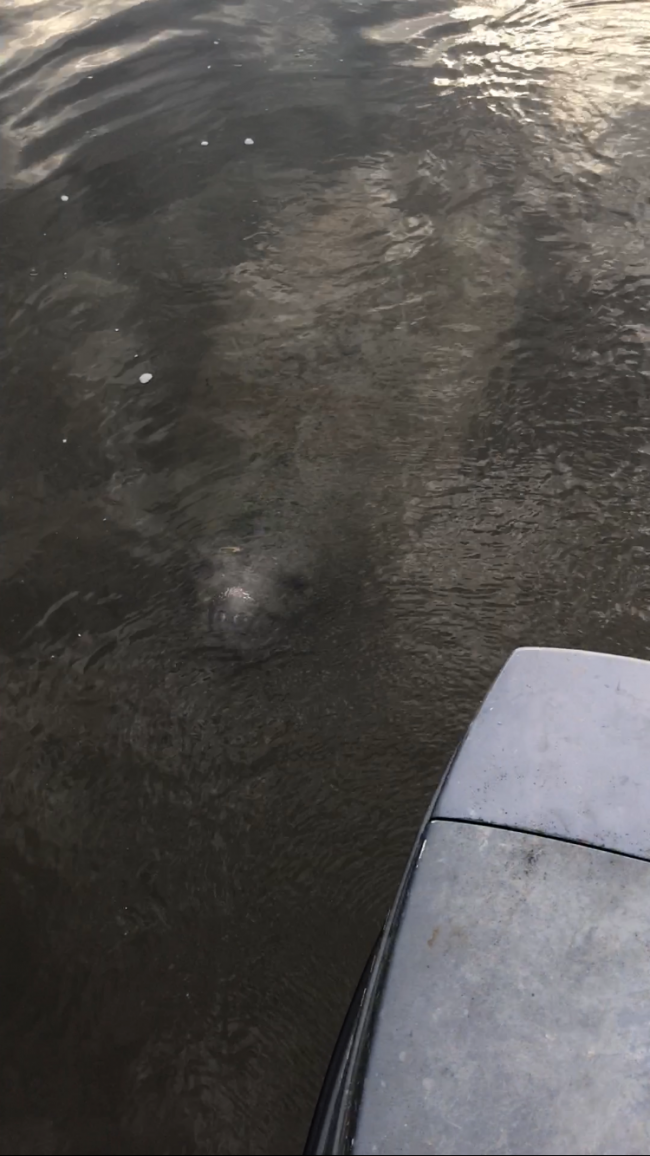 This manatee came up to the boat this past Saturday morning, we was on north pass I hope it makes it back home to Florida without any injuries, it's a long swim home

I plan on going shrimping one day this weekend if I can get out of working ,,, thinking about hitting Little Lake south of Lafitte , am I headed in the wright direction or should I try some where else. I'm pulling a 23' ballon trawl , any info will help .

Looking to go bass fishing this weekend, wanting to fishing in the marsh, thinking of going to Point Aux Chenes, should I try to stay more north of the wma in the canals or go in the marsh area?

I need some help on how to put a Tickle Chain on my 16' trawl, in hopes that it would improve my catch a little. If someone could tell me how long the chain should be, and how many inches hanging from the bottom? Also, what size chain should I use? Any info would help. Thanks.

Is the shrimp season still open in Lake Borgne area and if so are they catching there? Any info would be helpfull, thanks . 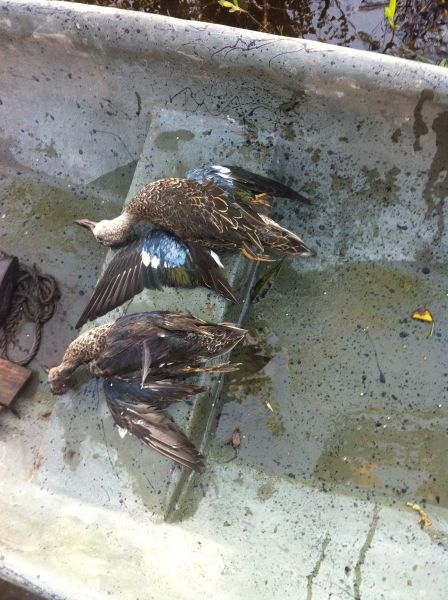 I managed to get 2 Bluewing in Joyce WMA this morning.

I was hopeing to have a chance to catch some shrimp this Sunday. Can anyone give me a report on the Ponchitrain area ? 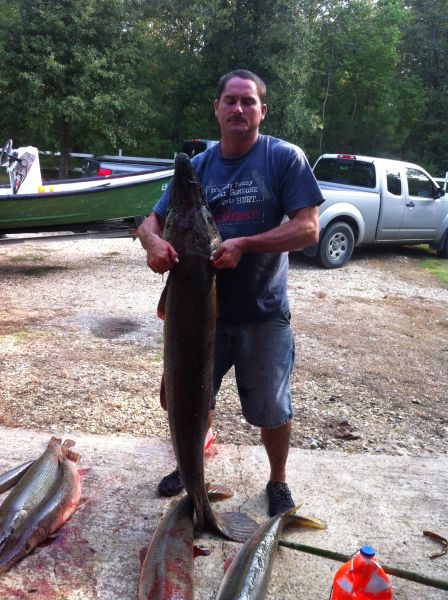 Went and threw out a few jugs Saturday evening. This is my catch Sunday morning. Hope to have a little better catch next weekend. 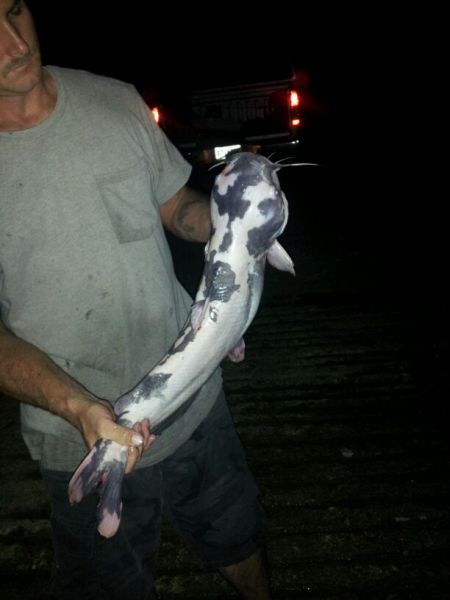 Me and a couple of friends went fishing on the Mississippi River in the Donaldsonville area one night last weekend. Here are a couple of fish that I thought was worth posting.

Rough day for shrimping , tried in Lake Catherian and barely caught enough for a gumbo .

I was planning on going to Lake Borgne this Saturday, but the wind forcast is calling for a 14 mlh wind from the east and Im thinking that that is going to be to much for my 16ft skiff, so I was woundering if I can trawl in the Little Lake, that is just north of Bornge? And if so are there any numders of shrimp in in there? And if not can someone give me an idea where to go ? Thanks !

With all this rain we are haveing , will it have some sort of an effect with the shrimp on the east side of Ponchartrain, I was hoping to try to catch a few pounds for my freezer this next coming weekend ! I only have a 16 ft trawl, should i try by the causeway or closer to Lake Borge ?

Can anyone tell me if there are any shrimp in Lake Salvador? I have a small skiff pulling a 16ft trawl. Im not looking to catch a boat load ,but I'd like to put a few lbs in the freezer. Is it posible now or should i wait till later in the season ?

Does anyone have any information on the William Bayou Hunting Club , in the Killian area? Looking to find something closer to the house, thanks!

Wanting to do a little commerical fishing for catfish on the weekends. Looking to find any fish markets out there buying fresh fish. Any inforamtion would be appreciated. Thanks

Does anyone know where I can find cheese by the bucket load ?

Just wondering about the game cameras out there? I haven't seen any pictures of any Louisiana bears sence deer season has opened up and now closed ? I enjoy keeping up with the local bear population ,and as much as time that I spend in the woods, I have never been fortunate enough too see one in the wild, so recent pictures will have to do ! Thanks.

Looking for information on any bow shooting tournamets comeing up ? I'm not a fancy shooter but I enjoy shooting ! Thanks,

Ok, here's a shot in the dark. Im looking for the name of the artist who has an album called "Dog Hunter" I think? If anyone knows what I am asking about can you please let me know something, Thanks.

Just wondering if it is too early for crawfishing with shallow water nets, and where to go ? Bonnie carrie, Cat Island , or Honey Island swamp ? Any info would be appreciated. Thank you !

LOL,,,, that's funny because several people joked about me haveing it in my freezer,,,,, but if I had to guess it would be like cleaning a sperm whale,,, and taste like a possum !!!

Greenhead , I thought if the frount nose of the skid plate is rubbed clean then that means that you are suppose to shorten the bottom leg line ?

Have you found anything out yet, my 23 hp locked up on me today and left me paddling , thank goodness for good people to pull me in .

I have a 23 vanguard long tail that is doing the same exact thing, it also leaks oil from the crank shaft seal. I have change that seal a number of times but it just doesn't want to stop leaking, the noise sounds like something is loose internally, if you find any info out PLEASE, feel me in as well .

I been hunting Joyce for years now and there have seen very little too no hog sign there, seems when have seen hog sign (very little ) they were just passing threw

Nah, ant no fear hear, I grew up in the swamps, I just don't have much trawling experience , so I'd be glad to see some pictures of a trawl set up! Also do you think I would be pushing my luck pulling a 23' with a 16' Reno skiff?

April 18, 2013 at 9:49pm
A comment titled: Bigger Trawl in response to a report titled: Shrimp Trawl

Congrats on your deer, I've been sticking to my spot in Joyce, but it just ant the same sence the storm.

December 30, 2012 at 3:37am
A comment titled: Fighting in response to a report titled: crazy animals fighting to the death

Do you have hogs in your area? What it looks like to me is a pig on the right and a coyote on the left.

Your correct about the color, I dont know why I told my wife Green when I had her type it in for me.

I like to use pieces of bambo cane 2 or 3ft in lenth tied close to my jugs. In my opinion the the pieces of cane do a couple of things, help as a drag. If there is a breeze of wind the the cane will slow it down from being pushed to bank, and you can always use it as a grab handle. Thats just how I was always fixed mine, Good luck to all!

Thanks for the info but you didnt tell me what I wanted to here, lol. I was planing on Middle Bayou myself, because i was thinking not many people would be there. I guess will come up with another plan!

Choupic, that is just a Glo-Bright Orange paint that I put on with a brush. Entering this Gar Rodeo is gonna be a first for me. I was wondering how many people to expect, and do I have to worrie about people takeing or tampering with my jugs?

No I didn't get any Catfish or trash fish. I thought about the Amite River but I ended up running the Tickfaw River area. Both are good spots.

Choupic-Man, both in the same night is unusual but true, and good luck to you in the Gar Rodeo next week, I'll be there myself.

Bigjim, I might try and make a trip out that way sometime next week depending on the wind and my job ! Where do you launch at ?

BigJim are you pulling a bottom trawl and if so what size ?

Thanks guys for the info, BigJim im not too sure where Unknown Pass is so this trip will be trial and era ! I will give an update on what i do and catch !

S.T.P Team has not filled this section yet.