well the boat finally hit the dust today while out fishing. need a boat mechanic recommendation for a yamaha outboard 2 stroke engine on the westbank of new orleans. 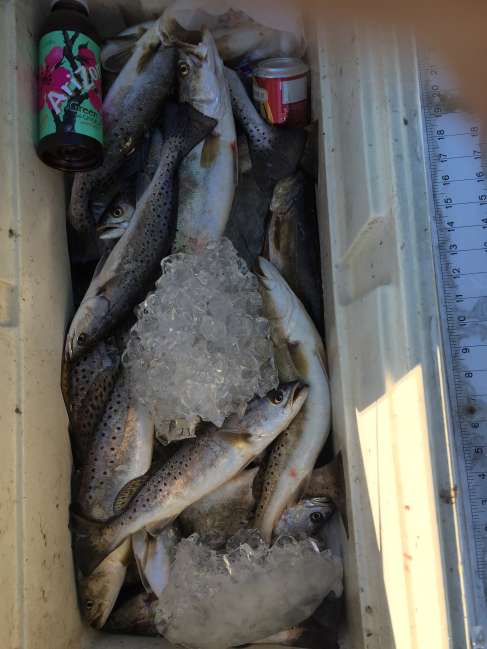 Just a tidbit of info for those using the belle chasse ferry. the big ferry is in for repairs for about 8 months(according to the operator friday). they are running a smaller ferry now and it may transport 1-2 boat at a time. Report: took a short trip Fri afternoon and found some specks in wreck bay. Too windy to fish anywhere else. And Errol if u read this give me a call, I lost your contact number.

Plan on fishing east pt alahache this saturday on my boat. Regular partner is busy anyone want to join?

Some info for the snapper fisherman. Went fishing the rigs out of empire sat and we were fishing at some of the rigs 7-8 miles south of jetties. Caught a good bit of red and mangrove snappers. Was boarded by wildlife out there and they did their inspections and wasnt concerned about the snappers that we had.

We are used to seeing good reports but i guess bad reports are just as valuable. Two of us attempted to fish MG yesterday. Points in bay chene, shoreline of bay jimmy, and points in Magnolia marsh. One throwback trout. Only good thing about trip was there was no cleanup. Wondered if anybody else did any better. Dont know whats wrong with the waters around there but its been a miserable couple of trips out of MG. Starting to think I need to switch directions and launch out of the Pt even before fall hits.

got an open spot on my bayboat this saturday for fishing Myrtle Grove if anyone is interested. Email me.

Anyone the status of Delta Marina in Empire. Is it still open since Ive heard rumors of it being auctioning off and if it is open is there live bait there.

Regular fishing buddy busy this Sat. Seeing if anyone wants to join me this sat. fishing out of Myrtle Grove in my boat. Email me.

Well its time to replace trailer tires. Just seeing what everyone is running on there trailers and where to get it in New Orleans. Want something thats gonna last more than 1 year, because it seems Im replacing tires every year. This is for a single axle trailer.

Fished the pt Sat. Couple specks in
second bay and couple reds in wreck. Decided
to see what it was like in black bay. Wrong
decision as the rollers made for bumpy ride. At
least the boat can take it. Water looked pretty
stained on inside and was still cold. Maybe 2-3
weeks and it should be on.

Got an open spot on the boat if some one wants to fish Pt ala HAche this Saturday.

Got a question for those familar with Delacroix. Was wondering can you run that pipeline canal from grand point bay north to 4 horse lake. I see it on google maps and pass it up while fishing the Pt but always wondered if I can actually run in it. A report from Saturday. Was able to haul out 37 trout and around 10 whites while fishing Bay Law and Battleground Bay. Most of it caught under birds. Gulps under a cork.

With snapper season around the corner, was wondering how far out of empire jetties would I have to run for snapper. Remember going with friend last year and didnt seem too far. Only taking bayboat out so the closer, the better. I've done it out of venice but really didn't want to run all the way down there for a couple of snapper tugs.

Got a question about fishing Black Bay during this time of year. Never fished it during winter. Would there be sheepshead and bull reds out under the platforms in Black Bay this time of the year. If the fishing doesn't pan out this weekend in Pt. A La Hache, with the predicted forecast, thinking about heading out to the rigs in BlackBay to soak some shrimp unless its gonna be a wasted trip.

Any body want to fish the Biloxi Marsh this Saturday? Got a 19 foot bayboat. Send me an email.

Fished the Pt today. Caught fish at every stop. Second, wreck, battleground, island, american. Problem was that it was only 1-2 fish. Did hit a point loaded with big reds to get the limit. Ended up with around 13 trout, 5 reds, and even a green trout.

On the subject of boat trailer lights and was wondering is it required by law to have that strip of three smaller lights that is usually mounted near the middle on the rear frame between the two turn lights.

Wondered if anybody has any ideas whats happening at the jefferson canal launch in Magnolia past myrtle grove launch. Went driving on 23 last weekend and saw that it was baricaded off. That was where I launched last year while fishing on the westbank.

what is your budget and how big of a screen do u want. The best setup would be the Lowrance hds series with a Louisiana card but it comes with a premium price.

yes its is required now if u own a boat either u have titles to all three or if its financed then the bank has the titles. make the owners get the titles

Ive had both. Get the power pole if u have a choice.

and if u dont know where oak river is just run down the pencil canal until u see the armada of boats. Cold weather will concentrate these fish in certain deep holes

shimano stradic ci4 3000 with a 7.2 medium action rod. I like a gloomis greenwater. One combo for all. when it gets a little windy i dont even use the baitcaster unless i am drifting and casting into the wind. also this time of the year when i hooking onto lots of dinks, i like to use a screw lock jighead, otherwise im fidgeting withthe bait after every hookup.

shimano stradic ci4 3000 with a 7.2 medium action rod. I like a gloomis greenwater. One combo for all. when it gets a little windy i dont even use the baitcaster unless i am drifting and casting into the wind.

charter captains buy equipment that fit a certain price point. they are not going to go out and spend money on g loomis rods and high end st croix rods ( which i consider to be great rods) for every day use by their customers.

shimano stradic ci4 3000. perfect reel for fishing the marsh and bays. light and powerful. find a used one for around 150. i know its alittle outside of your budget, but withthe amount of time and money we waste on this passion, 150 is a kick in the bucket for a great reel.

There should only be one reason why u cant find fish this time of the year in Delacroix. if this is your first trip and u are not familar with the area. Delacroix is one of the easiest areas around to find fish, especially in the fall. I mainly fish on the westbank but if i wanted to go catching then im either launching at delacroix or pt ala hache.

as in reggio near delacroix. Are u after specks and reds cause they should be close to being on fire there now.

They were in basa basa and caminada bay 2 weeks ago. by now i would imagine they are in Hackberry and south end of bay dos gris and coffee bay. Or at least that is where i would start. As for baits, I fish one bait all year long, matrix shad lemonhead on a screw lock jig. Basically only bait i carry in boat. There was a report here last week that birds were working in little lake.

great video. is someone fishing a hard bait under a cork? glad u found the trout, looks like they are moving in. 2 weeks ago had to go past hackberry bay for them.

i bought a used boat that had a 5 inch screen lowrance. great unit but kinda small, instead of replacing it with a bigger unit i just mounted a 10 inch tablet running navionics on the side. I like it so much more that the regular chartplotter it works double duty as it has all my music on there.

i couldnt outrun the whites last week out of lafitte. problem was they were the 8-10 inch variety. Was fun though.

the information is out there, u just need to decipher it. Even when the guides post, u can get cues as to where the fish are in relation to the spots they mention. If u want specks now they are still close to outside, thats where i have been finding them for the last 2-3 weeks ( doenst matter if its hopedale, dleacroix, or lafitte) and from my records after this front this week, u can start in the middle bays. I wont start to look in the inner bays or what is considered winter spots until Thanksgiving. So from now until thanksgiving im hitting all my mid bay spots. If u want specific spots u are just going to have to hire a guide.

i would have to agree, if there was ever a weekend to fish this would be it. The bays havent been pressured for about a week now, and following storms have always been some of my best fishing trips.

thanks for the feedback, gonna hit it this week for labor day weeked. The trout may also have moved into hackberry. with this weather system

great video. guess i got head that way for some reds. Been running all the way to hackberry and basa basa for trout last 3 outings.

i have to ask, u fished from 8 in the morning to 7 at night, cause that is hardcore. or was it just monday morning

what u need is a gps and a membership in sea tow. u can get anice used unit for 3-400 dollars, itll also have the depthfinder. kill 2 birds with one.

Samarai has not filled this section yet.