To all you idiots with light bars on you boat. It is completely unnecessary to ride in someone's rooster cone with it on for 4 miles downriver. You're blinding the other boaters. Turn that s!@# off! If you can't run in the dark with out your light bar you shouldn't be out there before daylight. Advice: If you turn the light bar off for a minute and let you're eyes adjust you can see just fine. Even if there is no moon. This goes for you Mr. 20' white express with the light bar mounted to grab rail on the console.

For you guys new to hunting and surface drives. It is not acceptable or polite to constantly rev your engine while in the marina. Let it idle.... I understand you sometimes need to rev a little when you first crank up, but man, once it's running don't rev it anymore. Stop trying to show off your custom exhaust. No body sleeping in their camp wants to be rudely waken up before its time because some jackass is revving in the marina. If you're excuse is my boat wont run unless I rev it, put that thing in the shop and get it fixed before you come down. Especially the kid with the new custom camo paint job and the big blaze orange letters on the side. Secondly guys the jump is no place to cut people off. Know where you're going before you leave the marina. One of you dummy's is going to get ran over one day and you're going to try to blame the guy who hit you but you're the dummy swerving back and forth, cutting across bows or turning around in the middle of the jump instead of going to either side. Get out the damn way! 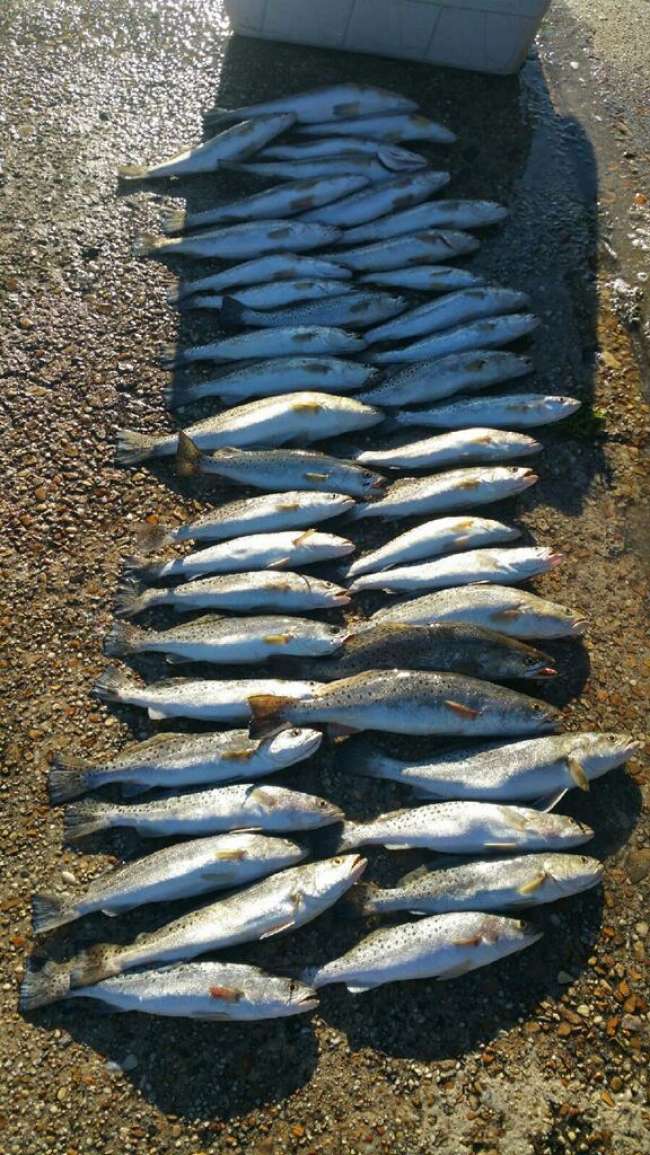 Found a healthy trout bite yesterday. We caught over 100 fish and kept 42. All the fish were caught in the morning before the wind picked on double rigged Matrix Shrimp Creole and Shrimp Cocktail. Good water movement was key in our success. 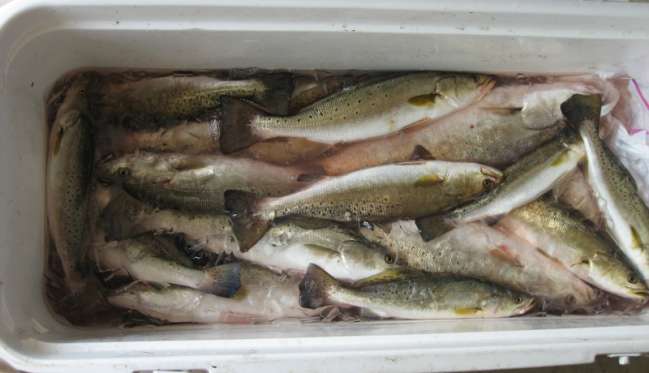 Caught my limit this morning all on soft plastics 18&#039; under a cork. Most was caught in the same spot neer old chenier in Little Lake. 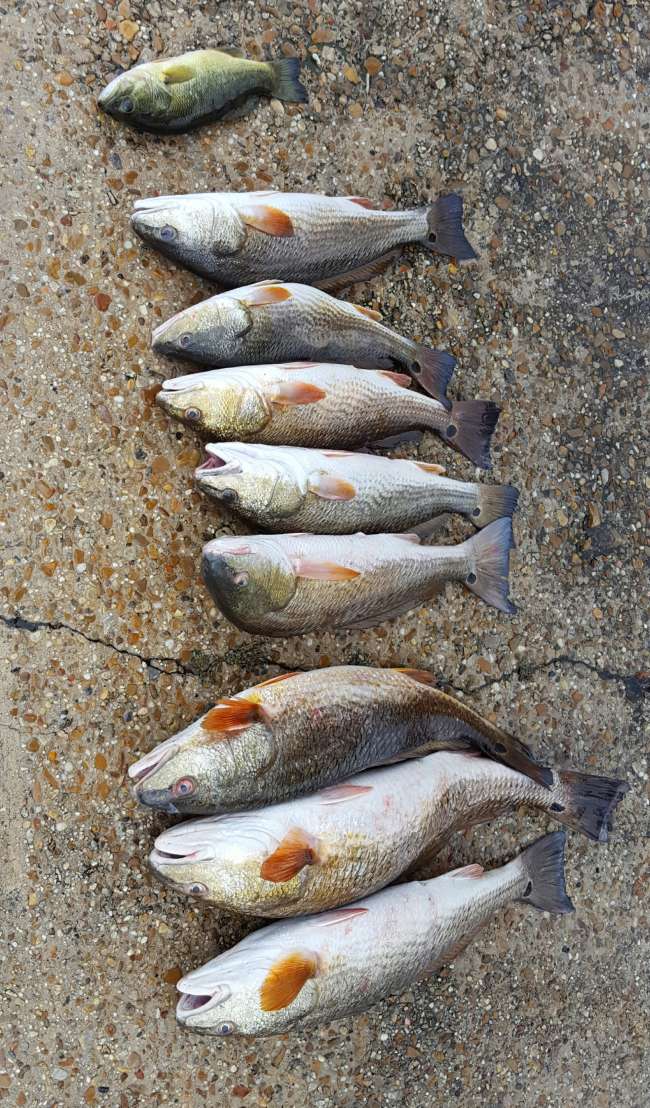 Caught plenty of reds along the walls in the Rigolets using dead shrimp on the bottom casting to the walls. Not fishing the cuts. I even caught a bass doing this. Saturday and Sunday. We even tagged a few out there. Monday was tough but we caught a falling tide in a pipeline canal with an outlet to the marsh and did well under a cork for a limit of reds late in the evening.

Ducks are pretty much non existent in the Salvador area. Some ducks are out in the lake but never come into the ponds. I've been back there almost every weekend since opening of deer season. I shot one small buck on the levee I hunt but havent heard hardly any shooting in the duck ponds. I made a duck hunt myself last weekend and never saw a duck. Only Galenue and Puldoue were there. It aint like it used to be.

When it lights up your boat like a Christmas tree, the light reflects off of everything.... The white boat, the T top, the back side of the windshield.... Light reflects it doesn't just go right pass you.... You must be one of those guys alspanky.?

My rant here is not directed at all boaters with light bars. Only the ones who have no common sense and need some advice. I get running through small bayous and areas where there's fallen timber and stumps with your light on. My problem was with the the dummy running from Tiger pass down past Main Pass in my rooster cone with the damn light in my eyes. I had to stop on the side of Main Pass until my eyes adjusted again so I could continue on. It was ridiculous.

I think apex predator writes great articles. If I had as much down time as he does, I would be in the woods too. There's nothing wrong with this guy hunting public land. There's really no need to be jealous here guys. If you don't like the guy, for whatever reason, just don't read his articles. How much is too much? Is it because you don't kill close to the number of animals that he does? Don't hate a man for being successful.

I see a lot of people here are reluctant to post tips but I'll give you a few to hopefully make you trip a productive one.

1. Look for moving water and bait. One without the other isn't as productive as having both. If the wind is blowing stiff out of the south fish the islands behind grand isle.Beat the crowds. Stay away from 'Hot Spots'. 'Hot spots' are where the crowds are. Keep it simple and try to fish moving water and structure. weather it be an oyster reef, platform, point, channel.

2. Get live shrimp. About 50 per person. you can catch a great box of fish. I personally use only soft plastics, but I fish every weekend and every day I can get off. If you cant afford live shrimp I recommend Matrix Lemon head for cleared water and Shrimp Creole for muddier water 2'-3' under a popping cork. I like to double rig these. I keep one pole rigged up with different colors until I figure out what color is more productive that day.

3. Use popping corks not the clip on ones. I know the clip on corks are convenient and cheap but spend the extra dollars and get you some good popping corks. I like the H&H because of the titanium wire but any brand works well. I also use the oval shape because you can move the bait quicker than the cup shape and still make a good splash on the surface.

4. Run and Gun. Pull up on a spot make 5 cast each. No bite. Move on. Small fish. Move on. Keep moving until you find a good bite and quality fish. Don't get hung up on one spot, until you find the fish.

I hope this is helpful. Be safe on the water. Good luck!

H&H Cock of the walk minnow

Top Tagger has not filled this section yet.