Method of fishing in response to a report titled:  Lafitte 3/31/12 Reds 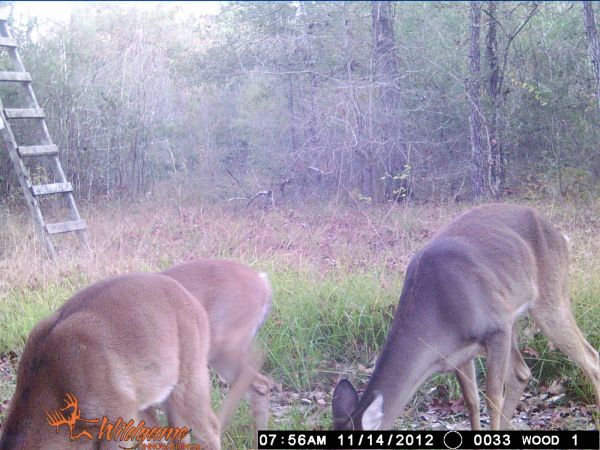 I finally got some daytime pics. The doe seems to be a little sickly. I read the earlier article about hemorrhagic disease and was wondering if this deer may be suffering from that disease. She has two healthy yearling with her.

What are the laws about hunting state waters that are not part of WMAs or NWRs? Thanks for the info

Thinking about making a run to Lafitte tomorrow and was wondering how a NE wind at 12mph would effect the redfishing? I've never been and not sure of conditions. My son has a new kayak that he wants to use to get hooked up on a nice red. I'm thinking of fishing Bayou Dupont and maybe the canals on the northeast side of the Pen. You can email me if you'd like: crbhood@yahoo.com

Has anyone fished the Ouachita River lately? Will be traveling up from BR soon to fish a tourney and was hoping for a little advice.

Can anyone tell me if Chenal Bayou (off the south end of False River) follows the same bass restrictions (14'min / 5 per day) as False River?

Anybody been to Tchefuncte / Rice canals this week?....was wondering if the water has cleared up?

I would love to fish the twin spans and the hwy 11 bridges but only have an aluminum tracker 1448. I have noticed on some of the posted videos that the lake looks somewhat calm at times and I think that my boat can handle that. Has anyone been there in a 14 footer or how low do the winds have to be to produce calm waters?

Anybody ever hunt Sabine? I have been assigned to work in Port Arthur and was trying to find a close place to duck hunt. Is it crowded? ...and How hard is it to get around?

I just got a Tracker Grizzly 1448 and would like to fish the rigolets pass. I have never been and was wondering if I would be ok fishing in a 14' aluminum boat.

Headed to White Lake for the lottery hunt next weekend and looking for a place to stay as close as possible....any suggestions? (I'll be coming from BR)

My son has been my hunting buddy since he could hold a gun. We have gotten into waterfowl hunting in the last couple of years and it has quickly become our favorite type of hunting. He has recently joined the US Army and will ship out to Basic Training in the middle of Oct. I would like to get in a good teal hunt with him before he leaves. Is there a public area within driving distance from BR that is known for teal? We only have a small boat with a trolling motor so it would have to be a walk in or a short boat ride. Thanks for your suggestions.

Just curious.....what are your thoughts on Black Cloud Steel Shot? Are they worth the money?

Headed to Lake Salvador this weekend for some reds. Any chance of catching some specs in that area?

Just wondering if the GI bridge is producing anything yet.

What would be the latest to start training a lab for duck hunting? I've had several opportunities for free labs, but they have been 1-2yrs old. I really don't want a dog that old if they are not trained or trainable.

My son and I are trying to break into the duck hunting world and I have a question. I noticed that there is not a teal limit listed other than the September season. I know of the 6 duck limit and what's included in it, but what about teal?

Thanks for the help

Can anybody tell me how the surf has been at Grand Isle? Last couple of times I've gone it's been real rough and I've had to stick to the bridge. Going tonight and would love to get in the surf

Does anyone know if the crabs are running in Pontchartrain?

Made the trip to GI yesterday....
On my way down got a call from a neighbor to tell me to fish the bridge. They fish under the lights and filled the ice chest up with 53 white trout and a few specs. When we got there we only had about an hour of darkness before the sun came up. We probably caught 40-50 specs total but on 13 keeper specs. Any thing we threw, they hit it. As long as there was a distinction between the lights and darkness, we caught fish. Once the distinction was gone, they shut down. Most were in the 11"-11.5" range. We still had a lot of fun.

By the way....we watch a couple of ladies down the bridge from us pull up about 8 dozen crabs in just over an hour.

Were y'all sight fishing or just casting to the bank? I'm dying to get down there while the reds are running.

April 02, 2012 at 7:22am
A comment titled: It can work in response to a report titled: Need Some Advice from Married Hunters

I try my best to keep my outdoor passion in balance with my family life. To me that means that I am not gone every weekend and when I am gone I am not gone all day long. Do I get to hunt and fish as much as I want? No, but this minimizes the friction between me and my wife when it comes to hunting and fishing and may night equal more time but the number of days outdoors is ok with me. I don't know what that balance is for you, but that is what you need to find.

If she is an outdoors person.......you have a keeper. Include her.

February 09, 2012 at 6:40am
A comment titled: It can work in response to a report titled: Need Some Advice from Other Boat Owners

First, Big Country my wife does not hunt or fish and April will be 28 yrs of marriage.....it does work.

I try my best to keep my outdoor passion in balance with my family life. To me that means that I am not gone every weekend and when I am gone I am not gone all day long. This minimizes the friction between me and my wife when it comes to hunting and fishing. I don't know what that balance is for you, but that is what you need to find.

If she is an outdoors person.......you have a keeper. Include her.

February 09, 2012 at 6:33am
A comment titled: Thanks in response to a report titled: The Rigolets

Thanks jls! My son is really wanting to get hooked up on some reds and I figured it may be ok if I stayed in some protected waters.

Everything that I have read, seen, and heard dealing with gun shyness is to start off at a distance away from your dog and begin shooting gradually moving closer to your dog while shooting until you are next to your dog.

Suggestion for a trainer.....Steve Riggins with Bear Creek on the Bayou. He's in the Slaughter, LA area.
www.bearcreekonthebayou.com

September 15, 2011 at 7:41am
A comment titled: temps in response to a report titled: False River Water Temperature

Ok, E and Capt.....I'm a rookie and yall are driving me crazy trying to think of what one thing they are doing wrong...any hints?

byubuk, were you on the piers?

What will this do to indian bayou?

October 14, 2009 at 11:08am
A comment titled: shotgun in response to a report titled: Semiautomatic 20 gauge for rabbit hunting

It's not an 1100, but I have an 870 that I have had for 20 years that I original bought for rabbit hunting. Never had a bit of trouble with it and it still looks as good as the day I bought it.

What an awesome experience...still remember my son's first deer

October 13, 2009 at 2:22pm
A comment titled: Woodies in response to a report titled: No teal but wood ducks

Must be in the Henderson area.........same for me last week - all woodies, and plenty of them

I'm gonna try to do some hunting there too. Problem is I've been hung up at work with 7 - 12's. It's hard to scout with that schedule. I did manage to make a quick walk thru in an area and saw some good deer tracks...there just not out of the way so I would probably have plenty of company. How has it worked with your camera? I wasn't sure about putting one out in Sherburne thinking it wouldn't last long before it would be taken. I would love to put out a camera on public land. I will be in a green p/u with a tool box. Maybe we can help drag each other's deer out.

September 23, 2009 at 8:57am
A comment titled: Throw it all in response to a report titled: bridge fishing

When they're on you can throw just about anything. Last time i went the tandem spec rigs worked well.

When they're biting, they will bite anything you throw at them.

Yes, it will be crowded. But, when I go I usually fish all night and most everybody leaves about 12-1am. Stick around because the tide is usally coming in about 2. when that happens, it's on! You won't catch large fish, but should catch a lot of them. Also, all the white trout you want to catch. My neighbor was there 2 weeks ago and did very well.

June 24, 2009 at 4:11pm
A comment titled: Going this weekend in response to a report titled: Where are the rabbit hunters

Headed out to see if we can kick some up this weekend. No dogs, gotta do it the hard way. Were those killed in front of dogs? Hard to beat rabbit hunting with dogs.

Look out now, cause he's hooked for life!

Indian Bayou is closed Jan 17-18 to all but youth and physically challenged deer hunts. After that...GO. The woodcocks are there. The first time I went I limited out pretty quick and didn't have a dog. There has been a lot of pressure on them, though. There is a foot trail at Canal parking area (2 parking areas north of the ranger station) that will take you right to the fields.

fisher_of_men has not filled this section yet.