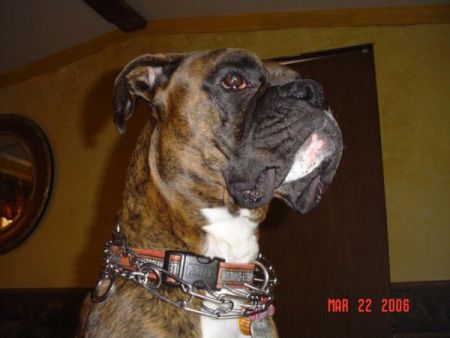 User Name
Brandon Cormier
Member Since
August 07, 2008 at 6:44pm
Age
49
Location
Houma, LA
Hunts For
Ducks and Deer...in that order.
Fishes For
Anything that bites. I enjoy both saltwater and freshwater fishing.
Organizations
N/A

No Birds in response to a report titled:  WAX LAKE 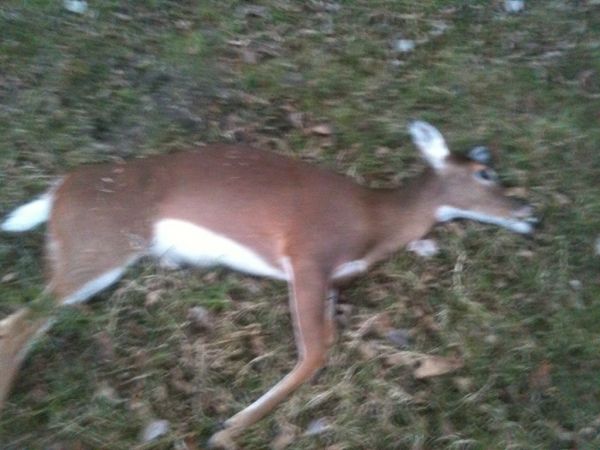 Anyone seeing any hogs around Starks? I will be out that way Thanksgiving weekend visiting family and would like to kill a hog or two.

I just acquired a 1988 johnson 88 special. the guy i got it from said that it starts and runs fine until it warms up. after it get to normal operating temp, the motor bogs down. he determined that it was not a fuel problem. the motor was rebuilt not long ago. compression is good on all cylinders. i am thinking power pack or timer base. any thoughts or suggestions on how to test these things?

I was just told a story of a guy who caught a possible 17lb 8oz speck on Tuesday (8-2-11) on 'the artificial reef' (I have no idea of which one, all that was said was 'reef')....I have not seen a picture, but was told that one exists....has anyone heard of or seen this fish? The Louisiana record stands at just over 12lbs. I have a hard time believing the 17lb speck story without hard evidence.....

Went spend a week at the camp out of Dulac. Water at camp was closed to fishing, but only had a mile to go to get to open fishing water. Hit the marsh with the wife in the mudboat. Redfish everywhere. Kept a couple for supper, released the rest. We caught none under 16', with a dozen over 30'. I had a 35' red hit my cocahoe just hanging in the water at the side of the boat. Needless to say it scared the heck out of me, but he was brought to the boat and released to breed again. Finished the week with 87 reds, 2 flounders, 5 drum, 2 hard heads, and 10 sheepsheads caught. All caught on sparkle beetle tipped with shrimp and avacado cocahoe's. The water opened for fishing at the camp at midnight last night. I DID NOT KEEP ALL FISH CAUGHT! Just wanted to make that clear.

Ok, we are heading to the camp in Dulac Wednesday (6-2-10)for a week. Is anyone catching anything in Lake Decade, West of Grand Calliou Bayou area?

I am at a loss. I have a week of vacation starting on June 2. Original plan was a couple days on Grand Isle, then the rest of the week at camp in Dulac. Now the spill has ruined our plans. Grand Isle is a mess. So we were going to the Dulac Camp for the whole week. Now they closed the waters around the Dulac camp. What is a man to do. The worse part is I paid my duck lease on the 3rd of this month, now I do not know if I will get to hunt it.

Ok all you ballistic guru's, I need some help. I just got a 45/70 and am in the process of putting a scope on it. I will be shooting the 405 grain soft point ammo. I have heard 3 or 4 different opinions on sighting it in. The opinion that I am leaning toward is 2 1/2" high at 50 yds will put it dead on at 100 yds. I have looked at charts, read the material, and still feel like a kindergarten kid in college. Please help me out. I dont have any shots over 100 yds where I hunt, most are between 50 and 75 yds and in real thick stuff. Thanks in advance.

I have a question for ya'll. Is there a boat launch down around Burns Point where you can access the Wax Delta with out going down the river? I know there is a launch under the Intracoastal Bridge, but you still have to go down the river. Someone told me there is a launch further down but you have to have a private lease to use it. I usually put in at Calumet.

Well I am stuck in Arkansas for at least another week for work. I went to a gun shop and fell in love. I bought a CVA Optima Elite 45/70 Government Special. Stainless with the camo stock and forearm. I wont get to hunt with it till I get back home as we work from before daylight to after dark. I did sneak off and fired 2 rounds at lunch, you know "like a kid in a candy store".

What is everyones thoughts on the 45/70? The guy at the shop said it kicked like a mule, but I shot 2 rounds and the kick was mild. Then again I am a 250 lb guy. Also the guy said I should set it 3" high at 50 yards, that would put it dead on at 100 yards. I have always shot the flat shooters (270, 7mm ) have never owned a "rainbow" shooter. ANy advice from the ballistic guys here would be appreciated.

I have added pictures to my ad for the 20 gauge Remington Youth Model. I tried to e-mail everyone that has e-mailed me, but for some reason all the e-mails came back undeliverable.

Going up to Winnfield for Thanksgiving weekend to bring my daughter deer hunting. Anyone else going to be there that weekend? We havent decided wether we will camp in Kisatchie Forest or camp at the Best Western.

I will be taking my 16 yo daughter deer hunting for the first time. She has been duck hunting with me for 2 seasons. Question: Should I let her hunt out of a climber with me in a climber next to her, or should I get a 2 person ladder stand? I will teach her how to use a climber in the pine trees at home. We will be doing that for the next month.

I have been at work for 2 weeks. Starting days off this afternoon. Will be in the blind tommorrow morning, even if I dont see anything, I will be there. 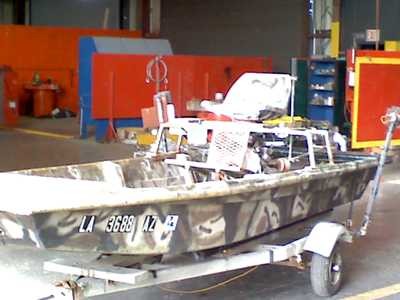 Having problems with the mudboat. Got the rebuilt carburator on yesterday. Launched and ran it. It ran fine for about 30 min. Then it started running on just one cylinder when I try to speed up. It seems like it is starving for gas. Pulled the plugs today, cleaned them, put them back, Reset the coils, and launched again. Idles fine, actually purrs. Hit the throttle and is spits, sputters, farts, coughs, gags, only one cylinder. I am at a loss. It is a 20 Briggs vanguard. Can someone please give me some advice, like hook a brother up. Duck season is just around the corner, and I need to get her running.

I just bought a Mossberg 835 UltiMag. 3 1/2" chamber. The barrel is ported. I have hunted with a Remington (2 3/4") for years and have used Winchester X-Pert Steel. To the guys who use these types of guns (ported barrel) "What type of shot performs best in a ported barrel?". I have heard that Black Cloud doesnt do well in a ported barrel. Any opinions or suggestions?

Happy Fathers Day to all.

I recently read an article in a Field & Stream magazine that had a quote that applies to almost everyone on this site.

" I believe that any man who introduces a child to the outdoors, even if it is just standing in the woods and listening to nature, deserves the honorary Father title. Especially if the child in question is not his own." Bill Heavey

I got invited to a friends for the 4th of July weekend. He lives in Covington on the Techfuncte River (they call it Little Techfuncte). According to him they catch bream and bass there. Has anyone ever fished there? What baits to use? Creme worms, inline spinners, bobber and jig? I will bring an ultra-lite spinning rig, and give it a try. 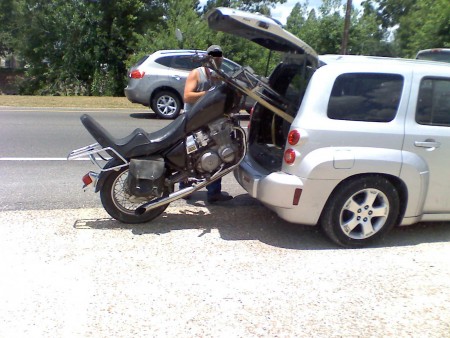 Ok guys and girls, I saw this and had to get a picture of it. Picture was taken in Houma Louisiana with my cell phone.

Note: part of the picture has been blacked out to keep the drivers identy protected.

why is it every year we have reports like this?...i have my own report .....I have scouted from the Texas state line to the Mississippi state line.....have not seen one bird at all....save your money and dont hunt this year......lmbo.....

September 13, 2012 at 9:32am
A comment titled: My thoughts in response to a report titled: No more house boats

These are just my thoughts:

1. With the invention of the 'mudmotors', more of the WAX has been accessible and the 'big money' players want to less competition.

2. The WLF have their hands tied

3. The funding thing is a joke. People would pay top dollar to have their house boat there year round, much less hunting season. The money collected during hunting season alone could fund the dredging activities.

4. Its happening to all of our WMA's. We as sportsmen are getting less and less access to our 'public area's' because of 'big money' players.

Funny thing is that in a lot of 'clubs', the only people who are made to follow the rules are the 'newbies'. The last club I was in, (18 years ago), had 'original founders' that did not have to follow rules set forth by the board. One rule was 'can not hunt someone's stand with out their permission'. I built a nice box stand, worked all summer clearing a shooting lane, planted a food plot, put up a feeder, helped others in the club with shooting lanes and plots, built a couple other stands for members. I got to the camp 2 days after opening, and the president of the club was in my stand with a doe on the ground. I said 'I thought we couldnt hunt someones stand without permission?' he said 'that dont apply to me, I am a charter member, i can do what i want.'....That was a $4000 mistake i will never make again.....

looks like a poacher in a camo head net

November 21, 2011 at 2:05pm
A comment titled: Quackhead in response to a report titled: Duck calls

I have been using R&T Quackhead calls for the past few years....the QUACK P.I.P.E. and Q-Unit....very clean sounding and not expensive (like 25 bucks each).....no complaints here.....just requires practice, practice, practice, the will to learn, practice, and practice.....did i mention practice?......

September 15, 2011 at 1:41pm
A comment titled: Shrimp in response to a report titled: Boiling Shrimp

Get the roux started

Thanks for the info....i will test them with an inline spark tester.....coil wire snaps to the tester, the tester snaps back on the plug.....mechanic at work turned me on to that....said its the best way to test a spark safely

on second thought i will buy a spark tester.....every man should have one

meauxjeaux....i dont blame you...i would have had to say it too.....i should have the engine on the boat tonight or tomorrow night....i am going to borrow an inline spark checker from someone and start working backwards from the plugs.....i know looks are not everything, but there is a coil that has a crack in the housing....if it winds up being a bad coil, that will be awesome....100 bucks for all 4 coils....

August 30, 2011 at 8:49am
A comment titled: trespasser in response to a report titled: unidentified picture

thats a picture of the bevis that was yelling about norco swamp, he is trespassing on your property....

As of right now, the Oilman's is still on. My boss told me to plan on being in Cocodrie on the 26th.

That is a rat snake. I killed a 6 footer a couple weeks ago (the snake was where my 15 month old grand baby plays outside). I couldn't take a chance.

I am an outdoors lover. My family and I love camping, fishing, hunting, really anything outdoors. I work in the oiflield, for the past 20 years. I also enjoy tying my own crappie jigs and flys.