Thank you, to those that wanted to help

Thank you, to those that wanted to help 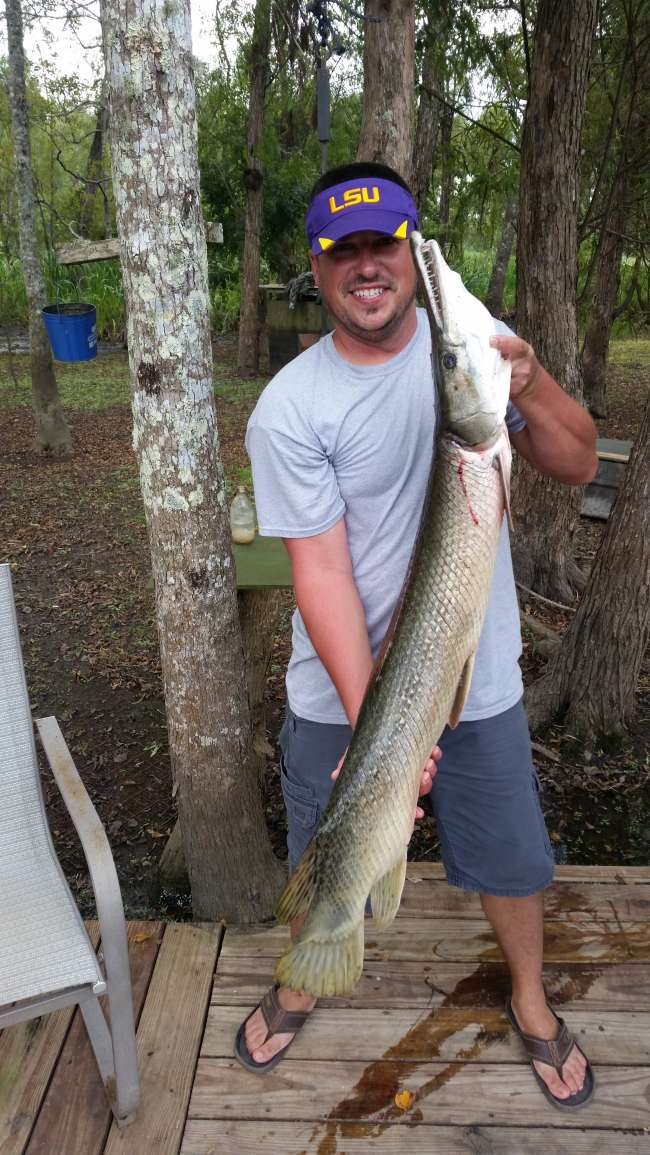 I want to thank those that wanted to help with my fishing trip to Delacroix last weekend. I won't name their names so they don't get hounded, but ya'll know who you are.
So unfortunately, Nate had other plans in store for us and we couldn't get down to Delacroix when my buddies came in from Las Vegas, Nevada. We have family in Morgan City so we decided to make with Plan B and take our 2 night stay at his Dad's fishing camp right off of the Atchafalaya River. Halters Island was a short run on Friday morning. The bite was non-existent using dead shrimp. We went around the corner into a small cut and threw for some live finger mullet. We caught a few handfuls and then went and anchored out to start fishing again. It turned on! We caught a few reds, a shark, a speck and a nice gar. The biggest Redfish being 42', probably the FATTEST red I've ever personally laid eyes on. Not sure of the weight. That one was revived and put back in the water. Saturday morning was rainy so we picked up and headed back in to town. I came on home to Mississippi. Sunday morning had cleared up and they went back out and caught several more. My buddy had plenty of fish to take back to Vegas with him and some lifelong memories. We even had some beautifully fresh smoked Garfish as a nice treat.
Again, thank you to those that tried to help. I'm looking again into trying to plan that trip to Delacroix, maybe in the Spring time. The wife will be having my baby girl next month so I'll be pretty busy for a while.

Me and a few buddies are coming in from out of town to stay at the Lodge there in Delacroix. Two guys are from Nevada and they want to experience our coon-ass style crab boils. I am looking for some FRESH live crab for a Thursday night boil. I'd prefer to get them right from the fisherman if possible. Like I said, we are all from out of town, (Morgan City and Mississippi and Nevada) so we don't know anybody in the Delacroix area. Any help would be greatly appreciated.

Also, if anyone wants to give up some fishing tips on the area... I promise to keep the secrets to myself. We don't fish this area at all so we won't invade your spot every weekend. We're all 4 just on vacation and want to have us a good time away from our job, kids and nagging wives.... (just a joke.... sort of)

If you rather email your number or whatever info... charlieleejr@gmail.com

My very first time fishing in the Rigolets area. Everything seemed to be perfect yesterday. Me, the wife and my son were so excited. The launch was nice, the ride was smooth even for the 9mph E wind. I went right on into the Old Pearl and tried to start fishing the grass beds along the bank where the water was coming out of those ponds that I had scouted on Google Earth for 3 days prior. My rope broke on the trolling motor. Took me about 30 minutes to get a fix for it. By that time, a couple of other guys were where I wanted to be. So I moved on down a little ways and began fishing. Apparently one of my batteries were bad, so the wind was blowing the boat harder than the troll motor could keep up. I tossed a gold spoon out, first cast with it... hooked on to a nice red that judging by the distance between dorsal and tail fins, had to be longer than 3 foot. As I wrestled with him for about 10 seconds, I noticed my drag wasn't releasing. I tried to move the drag knob.... IT WAS STUCK. I handed the pole to my 9yr old son. Hoping we'd get lucky enough for him to land his first redfish. I tried to work the troll motor to follow the fish, but after about 2 minutes the 20# mono snapped in the baitcaster spool. That was my only spoon. So after throwing the rod and reel in the water, I dug it back out of the mud and we moved along and caught one rat red and a sting ray.... after that, Nothing... the market shrimp we bought were stale and mushy and they didn't want any artificial I had. I didn't see anyone else doing any better than we were. We even rode down to that train bridge and nothing but small, bait stealing catfish. I knew I should've gotten fresh or live at that nice marina. Anyway, I do plan on going back and I will be better prepared.

It obviously doesn't get any better than that right there. From start to finish, good job!

Tim, try this link. It's right there at the top.

Choose the Lowrance-Eagle option. Don't forget to include your email in the comments section when you go to check out online. They will need it to send you the download.

If it's the Hook2 , satellite imagery will not work. Trust me, I found out the hard way. The original Hook it will, but it will slow the processor down.

I'm forced to go with Navionics on my Hook2 because I didn't do enough research first.

I've seen those things before, never knew what to call them.

Sounds like 'one of them days' you had on the water. At least you turned in to some fish though! nice job

I agree with going after a used boat first. You can find some really good deals that won't depreciate quickly like a brand new one and yes, most dealerships will bend on asking prices. Do your homework on what type of fishing you will be doing and with how many people and how far your fishing holes are. That will determine the type of boat that will suit you best.

Blue Wave is a very affordable starter boat that offers a basic setup and is good all round shallow/choppy riding boat. Ride that baby out for a couple of years and you can decide from there what you want more or less in your next boat. Don't go out there and make a $40,000 mistake.... that's my 2 cents as well.

Garfish sure is some fine eating when it's done properly!

This time of year, you can catch fish off side the road down there without even launching a boat. You won't have a hard time locating any fish. Same rules apply as just about everywhere; find clean moving water, look for bait movement, bird activity, points and cuts. Don't go out without a GPS, it all looks the same down there.

GOOD LUCK! Post a report when you get back!

I get my smoker going the way I want, I prefer a mixture of apple, pecan and mesquite wood. My gar slices are against the grain, about 5/8 to 3/4 inch think. Make sure you cut any red blood line off of the outside of the meat!!!! I go between 225 and 250. Usually only takes about 90 minutes total but I check a piece after 75 minutes. When I break it open, I want to see a slight glimmer of moisture still there. I want it to break apart with a little pressure. I don't want it to fall apart or be dry inside.

It really is good. Give it a shot and let us know how it comes out. Tweak the recipe and if you find something you like different, let me know!

Man that is so exciting. It's so much more fun to watch kids reel those big suckers in like that. It reminds me of when my Dad used to do that for me and now I do that with my son. Good job on great parenting!

Weedless gold spoons should definitely be in your arsenal!!! Be sure to attach them with a swivel to maximize effectiveness.
The Matrix Shad in Shrimp Creole works really well under a cork. That tends to be my go-to. I also like the Gulp shrimp in white with a white jighead bounced around without a cork. I try to hook it weedless as well for the grassbeds.

GOOD LUCK AND KEEP US POSTED!

It's going to be windy next weekend, take that into consideration. A nice strong North and East wind. I believe bulls are still running outside though. Hope that helps.

Carrierefisherman has not filled this section yet.