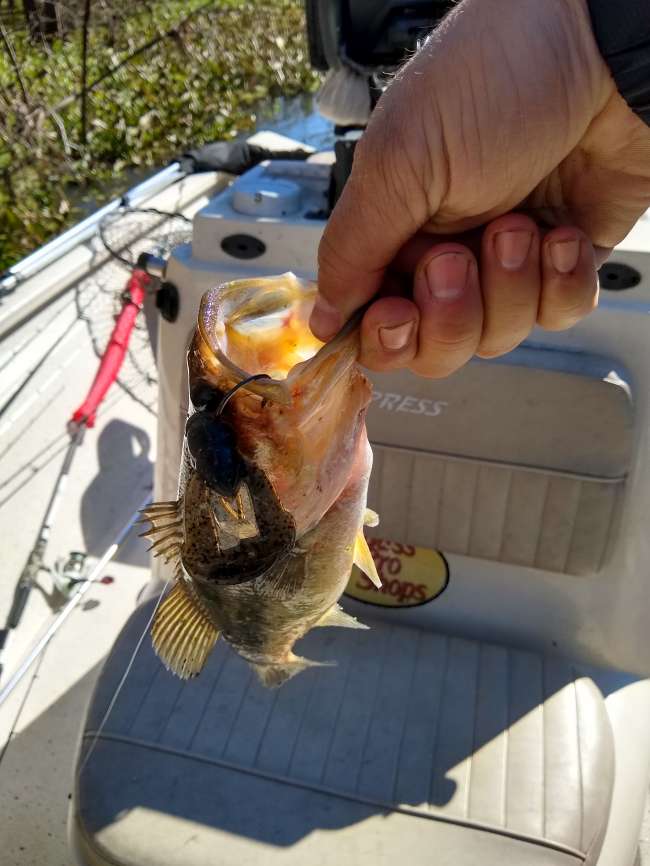 Only fish of the tournament was short. Only fish of the day with one other running with the jig which was short as well. The only place where I got bite was side bayous with current while flipping and punching the cover outside the current. This was the Flat Lake area which is HIGH and from what I know the bigens were caught running to Wax lake which is where they usually spawn first. Dad told me to go there Ã°ÂŸÂ˜Â‚...I limit my runs with a slower boat....but I have a boat! 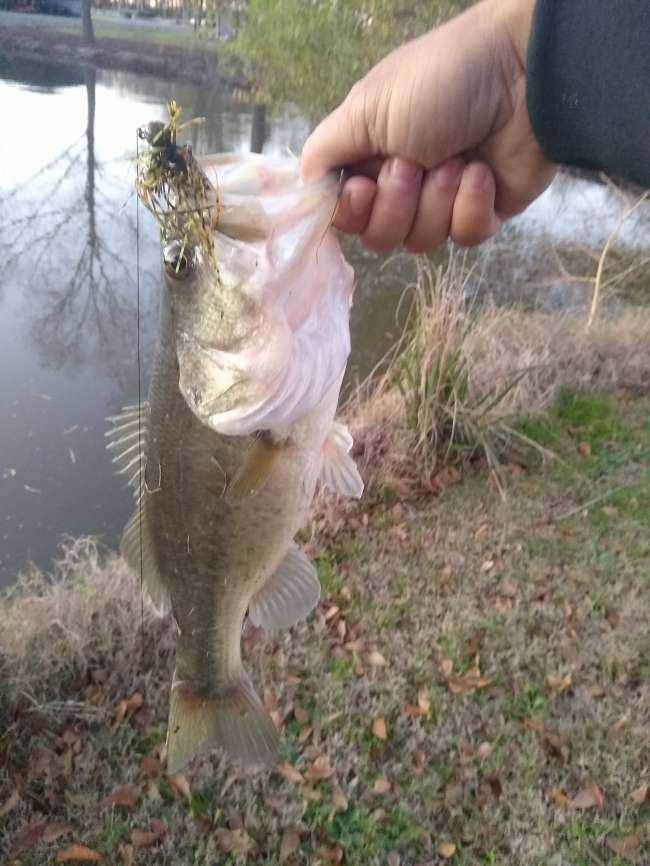 Pond fishing and a 20# sack. Flipped a ballin out jig with a z craw trailer 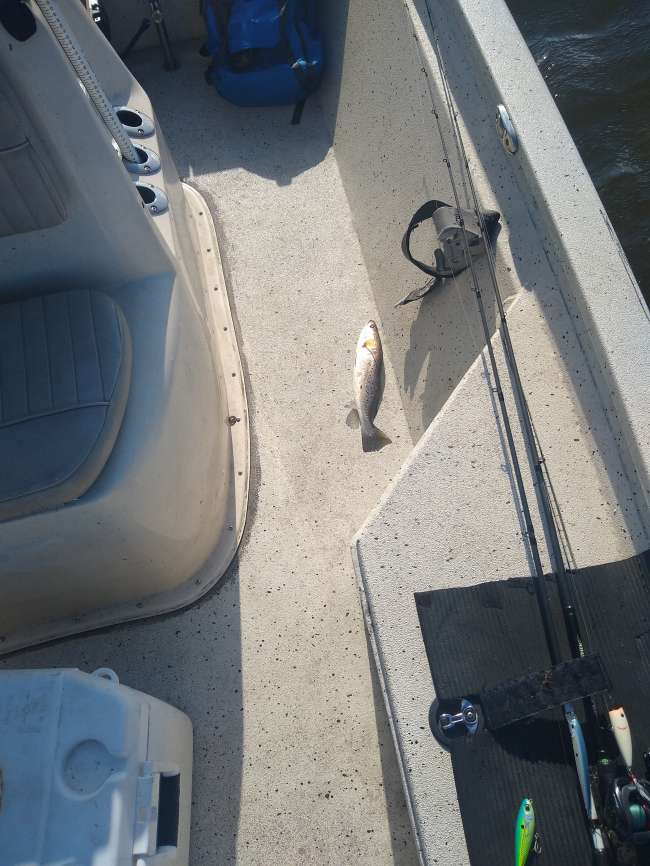 Fished 11/30 (first time inshore since last post) Only 10 keepers and a few throw backs. The bite was slow and soft with the 1/2 ounce z man jig head paired with a z man fluke generating the most bites (using plastics that float slows the rate of fall so you can throw a heavier plug in the wind and get the same or similar fall rate as a lighter weight) ....my buddy and his friend popped corks with shrimp and caught 12 specs along with some sheepshead. My buddy fished shallow areas 5-9 feet while I was fishing bends in canals 12-15 feet. The water temp was 64 which is not cold as I've caught trout on topwater in 48 degree water....this go got one strike on topwater and that was it. Water was dirty, I don't mind stained water but there was only a foot of visibility. Good luck and tight lines 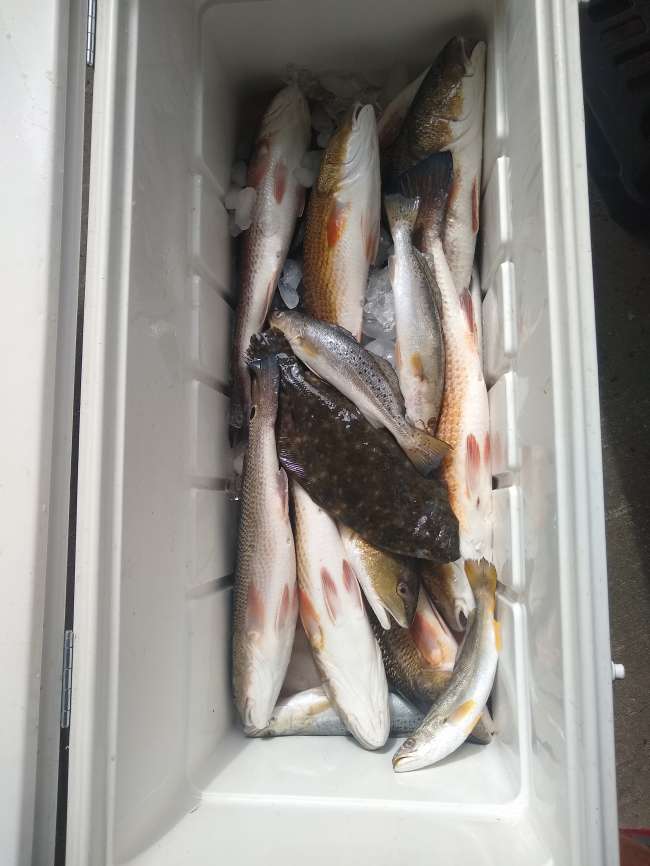 Mixed bag caught out of La Loutre with the wind pushing but the tide refusing to fall but bait was still pushed through the ponds into the bayou. When the wind and tide fall together they can empty a pond into La Loutre (or any canal, body of water) pushing the bait through a funnel and the fish will stack up and munch. That's the best location I can give you and can be used in your arsenal when looking and planning to fish an area - any area. The reds would not get out of the way but they are fun to catch (caught over 15 at > 20 inches one with seven spots which was promptly returned to his home) Top water, stroking a jig, cork with plastic and jerk baits were the methods used. 1/2 ounce (due to current and wind) Z man jig head with a Z man fluke - they are indestructible and hardly ever need changing. Cork with a small profile jig, jerk bait was a yozuri salt water jointed 8-10 feet of depth, top water was the usual Sexy Dawg (Strike King) which a redfish promptly put 2 trebles through my leg, shook hard and knocked one out. Thankfully my dad was there to hold the fish still while I unhooked the fish and then used my wire cutters to clip the barb end off. I keep rubbing alcohol in the boat for instances like this and they were brand new Gamakatsu EWG short shank no 2 trebles that I feel go through human flesh a bit too easy.....lol and yes I did get it on video with the go pro. 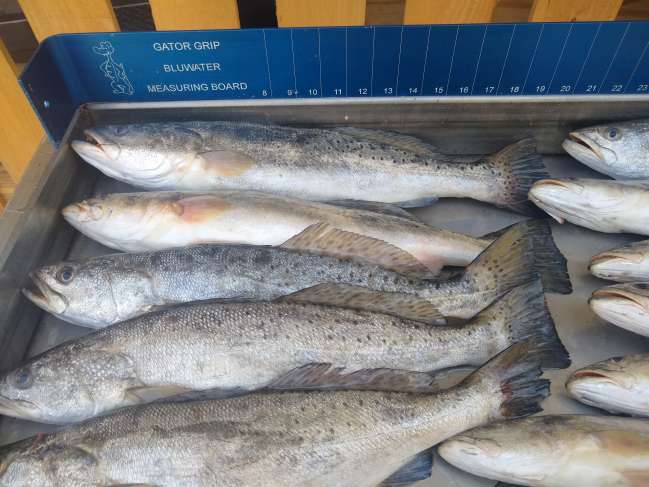 All fish were caught on a strike king sexy dawg (large with 3 hooks) and a mirror dine lipless jerkbait. Caught a few white on a jig Z man TRD and a 40 lb drum which was released after the 10 minute fight. Everything caught stroking a jig (TRD for me) was short but come mid November that should change. 40lb Gliss with a LEADER!! 20 lb P-line copolymer leader (helps it float and doesn't burn like straight fluro) and I use Yozuri 100% fluro for subsurface baits and also Yozuri hybrid for leaders to Gliss, again a leader is a must and non fluro leader secured with a uni knot. I did catch a couple on a Yozuri jerkbait. Tight lines 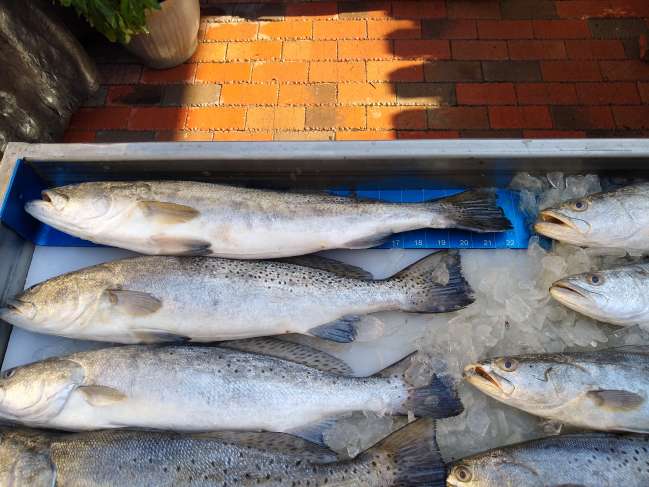 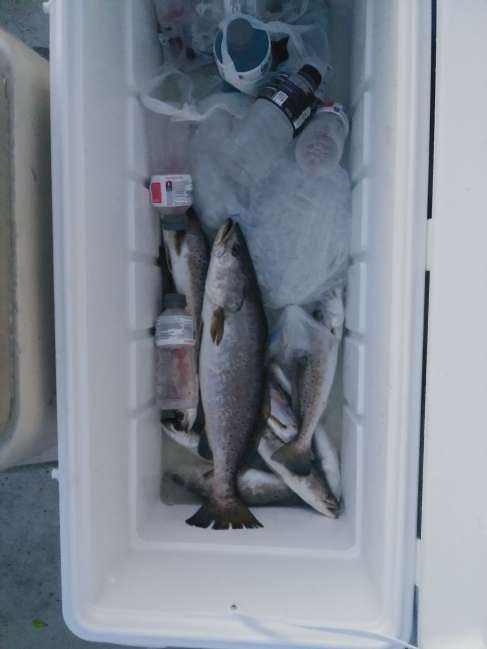 Caught the monster on top water by the rocks. The rest were on corks and its a slow bite unless you're super early or late evening. The water is clean with the marsh areas near Lena Lagoon area being consumed by too much grass. Lake Robin, Coquile (no spell check) are producing good trout and the rocks will have boats lined up - tip if you don't have down or side imaging to find those extra rocks on the bottom just look for a bunch of corks stuck in the rocks ; ) to find that spot. As usual bigens caught on sexy dawg with #2 ewg trebled. 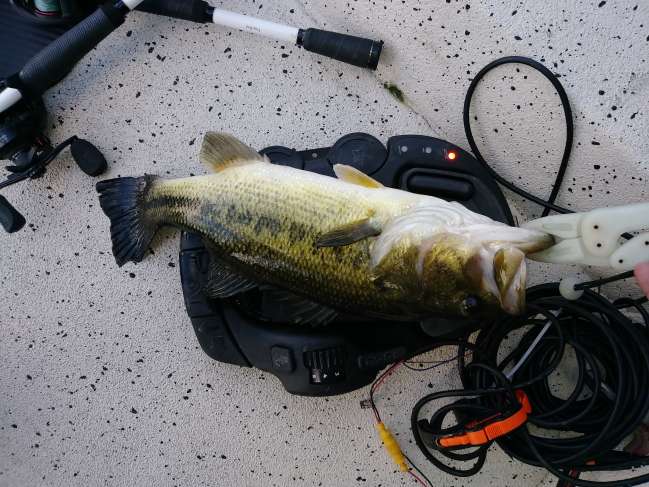 Walked the dog and caught 8 on a sexy dawg, white with the largest at 3.5 lbs. Missed 3 others on top water and 2 on a swim bait. Launched out of Dorions around 1pm and fished the Shell cuts. Good luck! 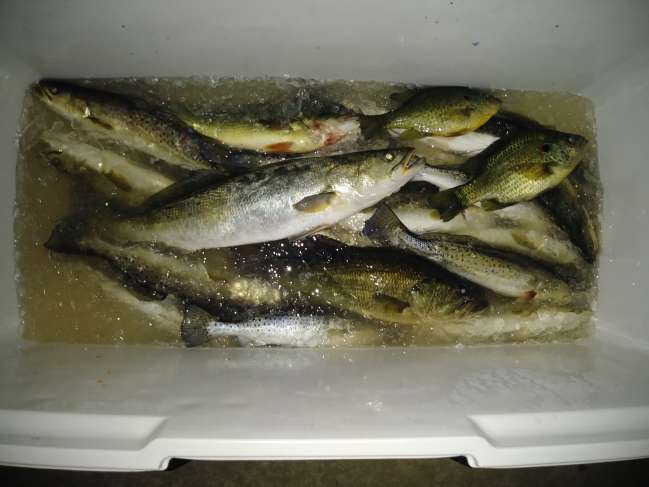 Caught em again and bream, trout, reds and bass in the same area is awesome! A 3 pound 4 ounce trout to boot with lots of reds undersized, a lot of small trout tossed back and 5 plus other large bass released and the rest are catch and grease! Fluke white, top water sexy dawg, cork and fin spin 2.5 inch chartreuse Berkley minow and many other baits landed fish today. 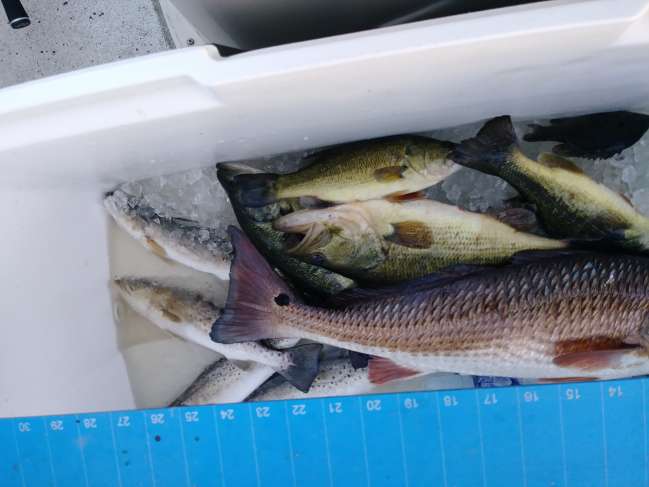 Biloxi Marsh. Soft jerkbait fluke all white was the hottest but also caught em on sexy dawg top water, cutter 110 sinking jerk bait, fin spin under a small cork...best was over the grass jerk it with slack and let her sink....only 1 of the bass I caught was still fanning (red tail and belly - catch and release but the others were catch and grease ; )) 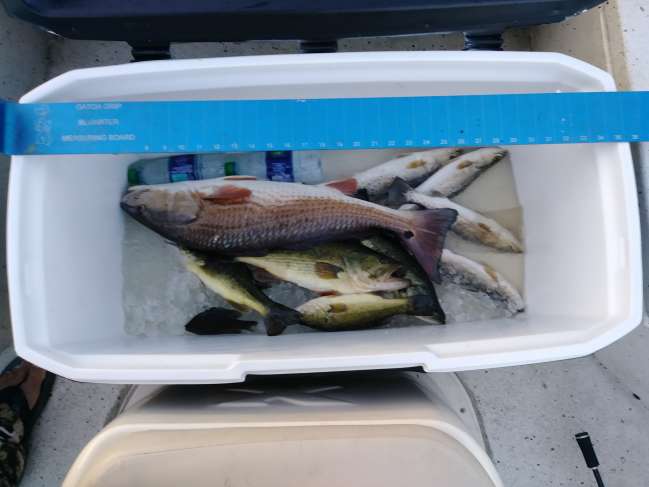 Biloxi Marsh area today. Reds, Bass, Trout and a bream. Red was 27.5 inches. Missed quite a few big bass today...launched out of Hopedale around 1030 am and fought the wind all day. Sinking jerk bait cutter 110, fin spin 1/16 ounce 1 foot under a small cork, top water sexy dawg (silver blue and chrome) all caught fish but the favorite was a bright all white fluke by Gulp on a trokar weedless hook ( soft jerk bait twitch with slack and let it drop in the grass) 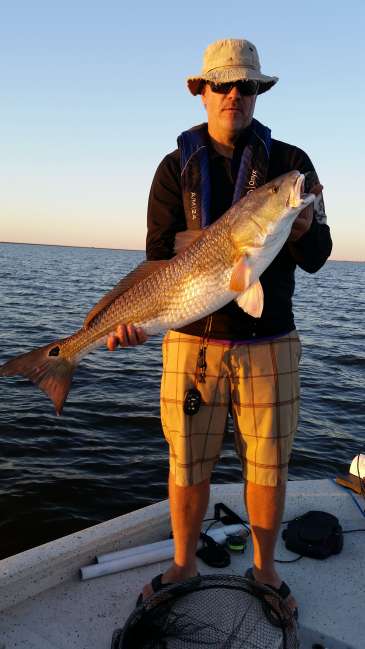 Caught this big one and a few keeper trout. Tide was at the lowest differential for the month and the water was not moving much. Had a good time and it's always fun catching and releasing a 33 inch bull. 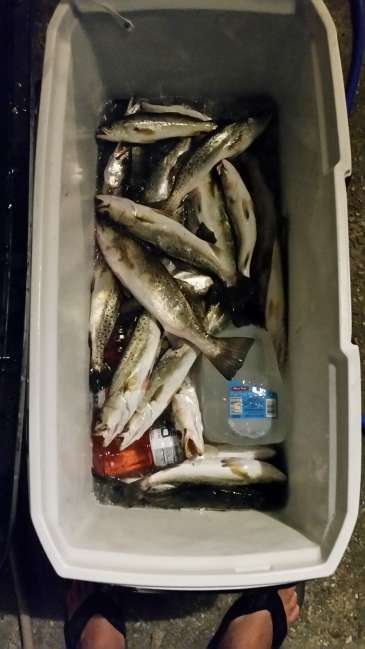 Had a great time around Drum lake and left em biting. Baits used were shrimp style jerk bait (best, suspended just below the surface ) top water she dawg (2nd best) and gulp under a cork with a double rig. Wind was ene which kept the water just above the grass in most areas and it was amazing watching the specs coming out if the water while feeding for hours..... 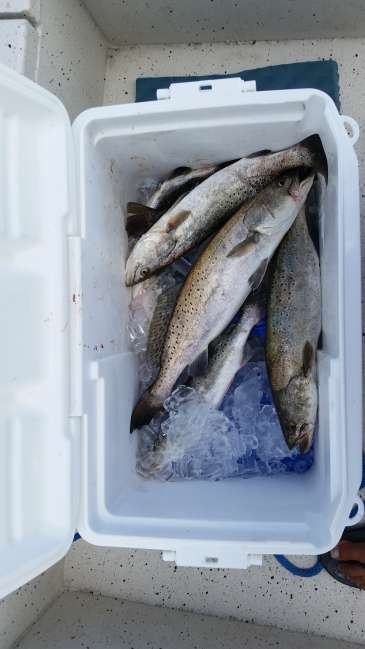 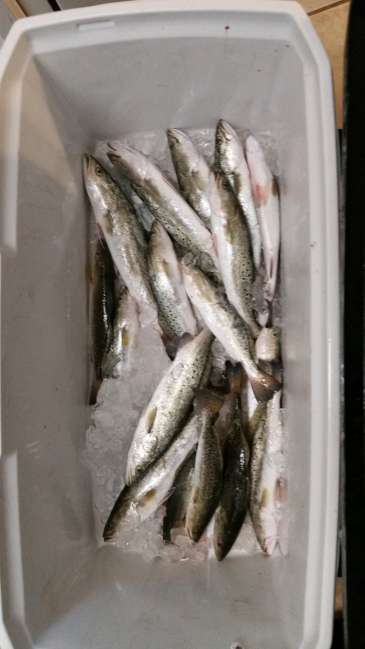 Caught em again Friday and Monday. Poor conditions of tide but should become much better this weekend. Good luck & go set a hook 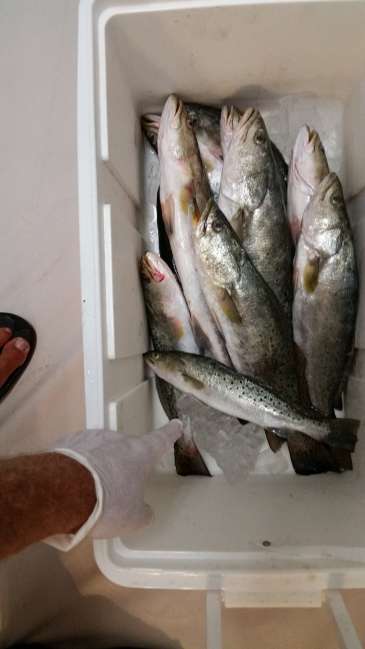 Caught some big Specs on top water - she dog and a couple on an artificial shrimp jerkbait. Best was over 22 inches with only one less than 14 and a few at 18-20. Fished 8-7 Monday

Navinocs paired with a bird. Best I've seen besides my lakemaster cards. However there's no land sat pics. I would pic the area at home on Google Earth pro then boat your way.....humminbird standard built in maps shows the same thing you're having trouble with so I got a Navionics card for the marsh and Lakemaster for the lakes.

Monotex with world record distance. It's different and takes a while if you're not using it a lot or in tune with your gear. Being lighter you may get more wind knots with spinning gear if you don't control your slack. Again I use a uni knot with a copolymer leader P line 15-20lb leader. Landed a 30-40lb drum with it last week.....it bent the frame of the net.

Thank you. It's a fishing line about 30% thinner than braid but less abrasion resistance than braid. That's why I stress to use a leader.

Thanks!! I know you will find the time and the fish.

In 2016 August/September I hunted uncompahgre Forrest (most hunted unit and relatively flatter than most of the rockies.) It's unit 166/167 I believe and I camped next to Long point mountain to be specific but the unit next to it is a trophy unit and takes years to get drawn there....I was out there for 12 days or so (by myself) & saw lots of mule deer and a few elk - missed the only time I shot - archery. I also went to 2 other parks - the unit around purgatory is one of the better but it's steep which also means very few people.....it's next to Cascade River and is very scenic with a mountain bike trail for a few miles....at that time of year the lows we're only 39-40 which means you don't need coffee when you use a shower bag at that temp....have fun and I hope you can go!!

Spoil canal (one with yellow track) is the best as its shielded from wind and you can run as fast as is safe. Running MRGO the whole way can get choppy with 10-15 mph winds. I see all sizes run that route so just follow the grey pvc (conduit) and you will be good.

Catchem all release a few

Lol. Used the grabber to weigh and if the trebles were in tight spots....if you've ever had a size one go through your finger you remember.

I love tossing a sexy dawg by them but I bump more than catch that way.... its a blast though. The best stealth way I use is a fluke with no weight, weedless hook (owner screw on or trokar) on a spinning reel with gliss 24lb (gliss is 1/3 the diameter of braid and you can sling light baits) and a 15 or 20 fluro leader. You can skip it quietly jerk pause jerk and bam. Caught this beast today doing that. 26.5 inches 7 lb 10 ounce male.

Land vs Water that flows freely and supported by taxes - different than private property. If you can float it you can boat it in TX....The water moves from up north (snow melt and other) as well as tidal ocean waters which move in and out....different than owning land. As it moves through the state (again different than land not moving) the state claims rights to it and the fish within it. So therefore it can't be claimed by an individual and yes if your duck pond is connected to a bayou and not land locked people can boat it if this bill passes.

Close to the bayou opening. Wind was pushing the bait through...so the fish were feeding

Pointing at a 12 incher and the biggest was just shy of 23- this is a box of 9 2-3.5 pounders thanks for the weight method and stats.....I have a short video clip of me putting them all on the yard stick if that's needed for the fish police lol yall take care.

Pointing at a 12 incher and the biggest was just shy of 23- this is a box of 9 2-3.5 pounders thanks for the weight method and stats.....I have a short video clip of me putting them all on the yard stick if that's needed for the fish police lol yall take care.

Nice fish! that appears larger than an 8 pound Bass I have on a wall....18.8 red for reference

Misfortune has not filled this section yet.