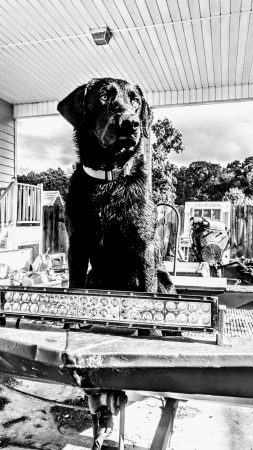 User has not posted a report.

User has no reports at this time.
A comment titled: Re: sacalait in response to a report titled: sacalait

I used to fish south of the bridge and catch a few but it?s not really worth the trouble. I actually fished a land locked pond Sunday that is right off the river that gets re stocked by the river every time the river flooded and didn?t catch a single fish which has never happened for me in the last 20 years. The river had a huge fish kill and hasn?t bounced back from what I?m seeing and a lot of locals are telling me.

Thanks for the update, yeah there fun to shoot and was pretty much the only thing I hunted earlier this year. With the way the last few season has been IÃ¢â¬â ¢m trying to adapt to different styles of hunting before I totally give up on the ducks and surprisingly it was actually kinda nice to go out and shoot a good bit of birds even if it was just buffleheads and scaup.

Have the divers moved back into the lake? They were there the first split and first week or 2 of the second but moved out.

Yeah thatÃ¢â¬â ¢s exactly what they were doing, taking a bay boat and chasing and corralling coots abt 200-300yds away the bay boat would chase until birds were tired then the flat boat would be behind trying to net the tired birds! We were hunting in the lake and was standing in waist deep water when Jeffery was running flat out with a person on the bow with a net they ended up getting to my decoys abt 30yds from us in the water before the guy in the bay boat yelled out to him. I thought I was about to have to shoot in the air to run him off if he didnÃ¢â¬â ¢t veer off at the last second! Me and my buddy just shouted and threw our arms in the air at the guy but he didnÃ¢â¬â ¢t have the decency to look at us and apologize he just cowered his head and sped off.

Went there 2 weekend ago and some guy try to net my decoys because he thought they were real ducks. The boat in front of him was his friends and yelled HEY JEFFERY THOSE ARE DECOYS!!!! Lol was really funny but scary how clueless some people are out on public land.

Personally I run as big of a spread as I possibly can with as many mojos as possible, I run decoys of all quality some old used decoys to new avian x. That being said when I wood duck hunt I only use up to 6 wood duck decoys and no mojos. The best thing u can do is just go out and give it a try and adjust accordingly to what u see the ducks doing, sometimes a huge spread doesnÃ¢â¬â ¢t work but when it does the birds work so much easier. Im at that stage where I got a lot of cheap decoys and am starting to see how fast they fall apart so from now on all ima buy is avian x or ghg pro grade. And I hunt all over the state in all conditions but mainly hit wmas and have good success but IÃ¢â¬â ¢m also the only guy I see that runs a 200+ decoy spread and 4-8 mojos on public land in a 16ft boat lol itÃ¢â¬â ¢s a lot of work but sometimes has a huge payoff.

Ground so soft u sink to ur nuts in a heartbeat! But if u get on the edge of big water with tall grass and possibly some roso u can walk it, but anywhere around a marsh pond is straight up quick sand. Most guys I see on land bring pallets or 2x12 boards but I hunt out of boat with a boat blind set as low as possible and hunt it like a layout boat due to not much natural cover. Also be prepared to be stopped in the middle of a hunt by lawlf agents they are very knowledgeable of where most people hunt and won't think twice about rolling up to ur pond with a pierouge or there bay boat, I went 2 weekends and was stopped both times at the end of my hunt. The agents were very nice and professional when they approached us, we we're all legal and had everything in order for them so they were really cool with us but they have a big problem with people in surface drives which are prohibited on the WMA and people shooting over there limit of lesser scaulp and hooded merganser which they told us most hunters don't pay attention to the hand book on bag limits. The hunter a few hundred yards from us received a fine for killing 6 scaulp which he thought was legal lol.

Not alot of water I hunted a lil pond on the far end didn't see a single duck or hear any shots didn't look too good in the parking lot had about 40 people there.

Why are people getting so butt hurt about surface drives????? Y'all know a outboard with a jack plate and a bored out pisser does the same damage or worse! They won't ban mud motors no matter how bad y'all want them to just because some old guys think there too loud that's like saying hey guys I know y'all like cheys but we're going to be a Ford only parish, we like the low emissions and the convenience of having a big hard handle to grab on while we climb into the back of our trucks, hey they probably love going to Uncle Rick's in Gatlinburg ALOT! But I think that would be just a bad look for the poor people of plaqumines parish. But idk they do got some jack leg passing hunting permits and fishing permits that make no sense so I guess we will just see how it goes.

I think that's the reason why me and my kids never catch anything at brec ponds. Because as Soon as it's stocked u get someone out fishing it ruining it for everyone else, but it's public so wut can u do? They actually put a sign with a limit of wut fish u can keep at the one in central by the ball park but a bunch of local kids got caught keeping fish at night with a cast net.

Sounds like a big old crock of sh** to me! Guess me and all my buddies ain't putting a dime into plaquemines parish this year. Let's see how they do after a season or two without the backing of the people who travel down to hunt and fish that area.

Also tried to make it to Elio but was to ruff had 3 foot waves. Good luck

Was out today hit the mrgo rocks at 8-8:30 only caught 1 trout on live shrimp 17incher so hit the marsh reds were on cork live or dead shrimp was a struggle but finished around 3 with 3 man limit of reds not a single keeper speck in marsh. Hit rocks on way end without a bite only 3-5 boats no one catching. So I would say not worth the trouble for trout but if u work hard on reds u can limit out. Also surprised to only see max 15 boats all day.