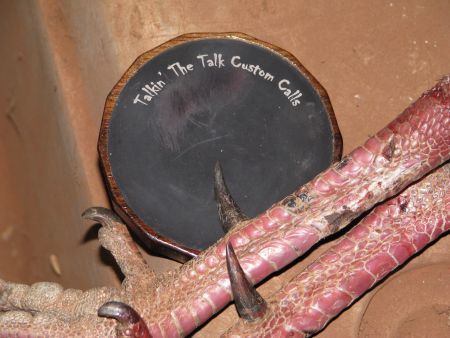 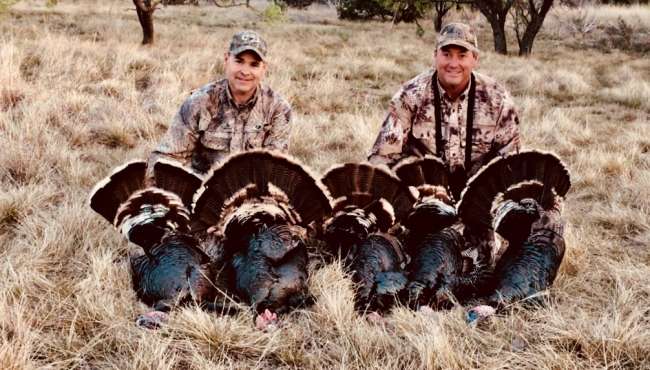 Had a great hunt in Texas last week with my longtime friend Eric. We got on the birds quick and the action was fast and furious. We were able to get 8 birds over the course of our hunt with 5 of those on the first afternoon. Most of the longbeards were coming in 2-4 at a time which allowed us to double up on 3 different occasions. All were beautiful birds with the best spurs measuring 1 5/8'' . 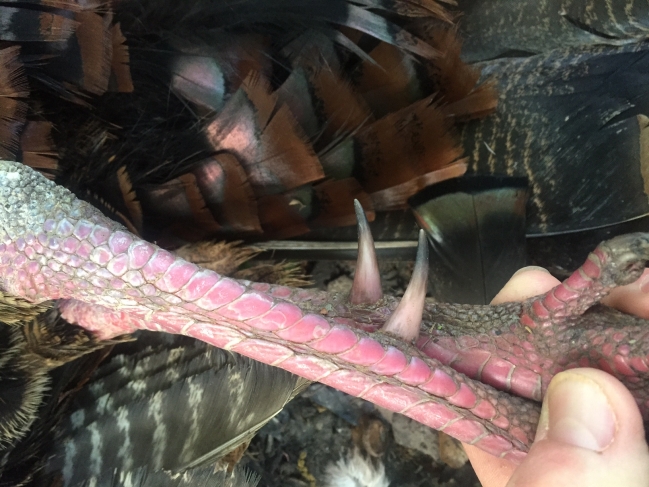 Was fortunate to be able to call in this Ascension Parish bird for this young man. This was his first turkey! It was a great hunt with the bird coming over 400 yards during the 20-30 minute setup and probably gobbled 60 times. The gobbler closed the distance to inside of 25 yards, but was not visible behind some brush. He stayed out of sight and gobbled over 20 times. The hunter was so excited that by his own words ' My arm and legs were shaking so much I didn't think I would be able to shoot' The gobbler eventually stepped out in full strut at 8 steps, a 3.5' #6 ended the hunt in short order. I always enjoy calling in birds for other hunters, but to see a 70 year old this excited really made my day. This is what it's all about, never lose that feeling.... 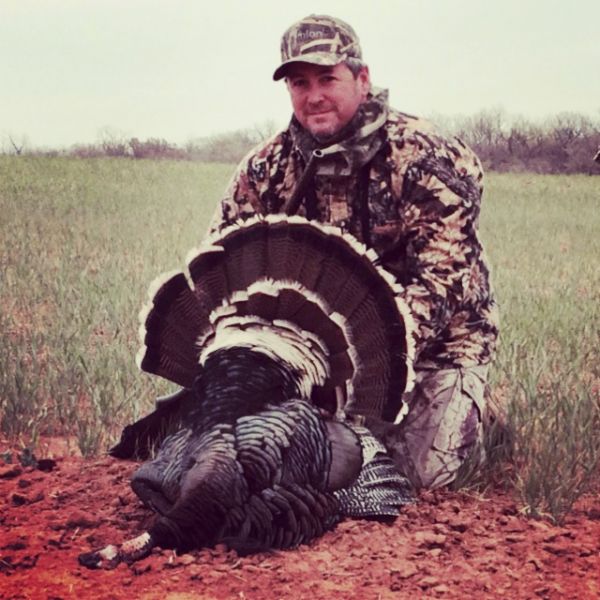 A few turkeys from a recent trip out west. 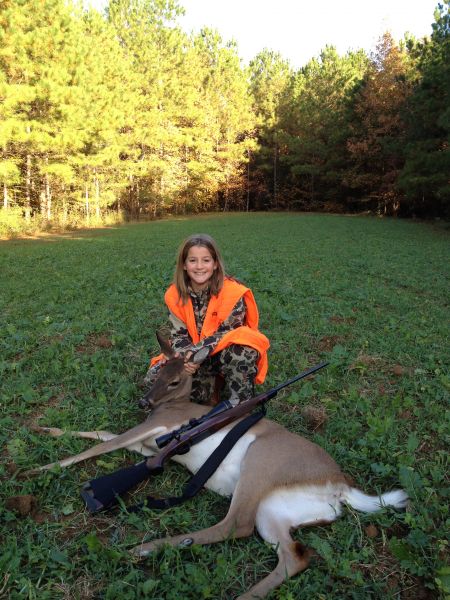 Proud hunter with her first of the year. 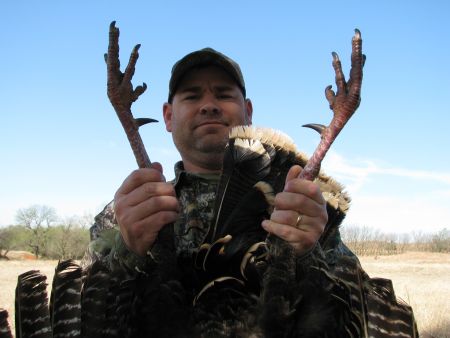 Here are some pictures of some turkeys that my friend Eric and I killed on a recent trip to Texas and Oklahoma. We had some great hunts with the birds responding and working very well. 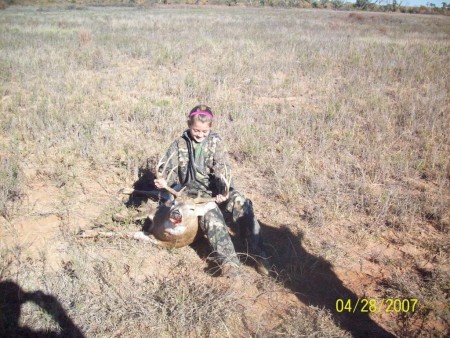 Here's a deer that my 11 year old girl shot when I brought her to North Texas last weekend. She had to take a shot with him facing us. Not the shot I wanted her to take, but he heard us moving around and got a little spooky. I told her it wasn't looking good and she said "I'm on him Daddy". So I told her to shot him. She smoked him! He was about 65-70 yards and the 7mm-08 and the reduced recoil loads did the job. We usually turkey hunt this cattle ranch and asked if we could come up and make a deer hunt. Seeing the smile on her face I'm glad I did. They don't have alot of deer, but they have some nice ones. The body size was just as impressive as the rack. This is her 4th deer with the biggest before this was a 4 point. 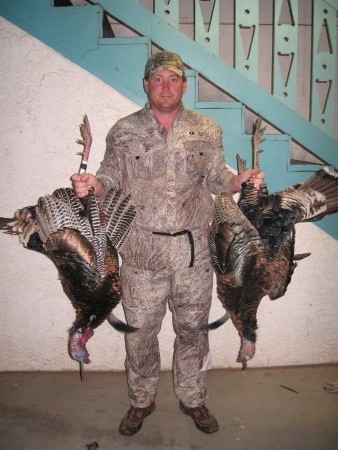 Here are some pictures of 2 Rio's and 2 Merriams that I killed last week on a trip with my friend Eric Kelley ( I'll post some pics of his birds if he doesn't). All total we killed 5 Rio's and 4 Merriams between the 2 of us. It was a great trip with the scenery in New Mexico being awesome. We hunted the Rio's in North Texas out of the town of Vernon. The weather was hot with the temp. getting up to 94 degrees. We started the trip off with a bang killing 3 birds on our first hunt. We had 7 or 8 long beards and about 20 jakes all gobbling and chasing each other out in front of us at one time , it was an awesome sight. Once the weather turned hot the birds just about shut down. On one of the pieces of property we hunted there was 2 long birds and 7 jakes that if you made a call to them they would turn and run and I do mean run. It didn't matter if they were 400 yards away, I had never seen anything like it before. We were able to take 2 more birds over the next 3 days. We managed to get a few good ones with the two in the picture have 1 3/8" and 1 1/4" spurs. We decided to leave for N.M. and day earlier since the birds didn't want to cooperate anymore. When we left Texas heading to Raton New Mexico it was in the 90's, but we were greeted by 50 MPH winds and night time lows in the mid 30's at our new hunting spot. Even with the wind we managed to kill 2 birds the first evening. The next morning the weather was great with little or no winds and 36 degrees. I was able to take a bird about 30 minutes after day light and while we were taking pictures of him we heard another bird gobbling about half a mile a way. It's amazing how far sound travels out there. We got my bird tagged and put my gun in the truck and headed off after Eric's second bird. We set up on his bird and waited for him to breed the hens that he had with him. We were just soft calling to him the whole time, but it was enough for him to walk down in our lap. Eric ended this bird's worries with a 3.5" 4x5x7 Nitro. All 4 Merriams had beards about 8" long and spurs 1/2"-3/4". Their spurs were all broke from the rocks, but it didn't appear that they would have been much over 3/4" regardless. These merriams would gobble like crazy even when they had hens with them it was a welcome change from hunting around the house. We had a great trip and could have killed more birds, but we always hunt together rather then going off on our own. This makes the hunt so much more enjoyable when you've got a friend there with you making memories (plus I need all the help I can get). 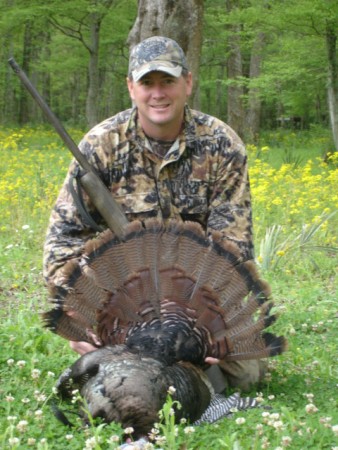 This is a bird that I killed in livingston Parish right on the Ascension Parish line. I killed him on the opening Saturday of the season this year at about 9:30. After working some birds earlier that morning only to have someone slip in a bump them, I struck this bird while walking a four wheeler trailer at 9:00. He came in to about 35 yards and a 3.5" Nitro 4x5x7 finished things off nicely. It looked like you hit him with a boat paddle when I pulled the trigger. He weighed 17#'s, 8.25" beard, and 1.25" spurs. 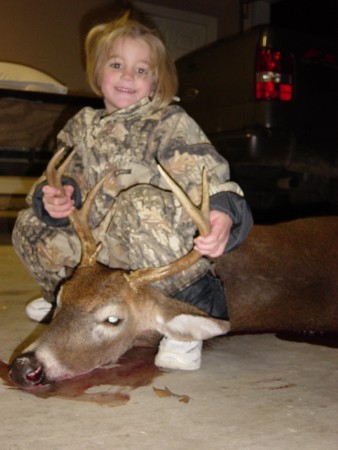 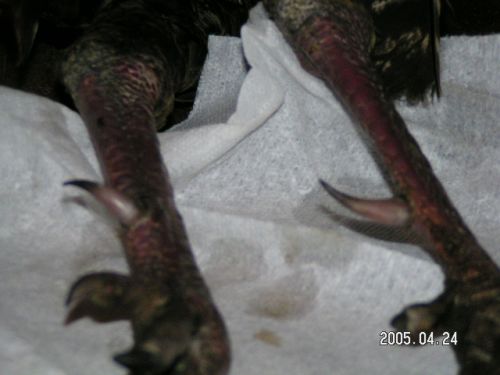 Shot on the last day of the Louisiana season.

Congrats! That's some great birds...you need to post some pictures of those spurs!!!

This is from ABC report...

In addition to the casualties at the school, Lanza's mother, Nancy Lanza, was killed in her home, federal and state sources told ABC News.

According to sources, Lanza shot his mother in the face, then left his house armed with at least two semi-automatic handguns, a Glock and a Sig Sauer, and a semi-automatic rifle. He was also wearing a bulletproof vest.

Lanza drove to Sandy Hook Elementary School and continued his rampage, killing 26 people, authorities said. He was found dead at the school. It appeared that he died from what was believed to be a self-inflicted gunshot wound. The rifle was found in his car.

So I guess everyone can just pick the report you like becuase none seem to be the same...

I haven't followed the story, but I thought all of this was done with 2 pistols and rifle was found in his car when it was searched.

Yeah we had a great trip. We killed 2 birds with 1.5' spurs and one with 1 3/8' spurs. If that was the only 3 we killed it would have been great, but we ended up with 15 total for 3 people between both states. I'll put your name on the list for next year...we will be conducting interviews for open spots...gifts are encouraged.

April 29, 2010 at 1:28pm
A comment titled: What! in response to a report titled: Largest Whitetail ever raised?

Sowtrout1 don't lie...you probably shot the screen when the picture popped up.

I'll 2nd that wow! That would have been funny if it wouldn't have been so WTH! LOL

I heard him playing a slate one time. It sounded like he had two strikers in his hand!

March 10, 2009 at 10:44am
A comment titled: Texaco Slip in response to a report titled: The Montegut Marina

We're talking about the Dead-End just North and across the canal from the Marina. We just call it the "Dead-End", but I think most people call it the Texaco slip.

February 12, 2009 at 1:16pm
A comment titled: Dead-End in response to a report titled: The Montegut Marina

I heard that the dead-end/slip North of the Marina has be recently posted. Is this true? If so, was it posted by the people that have it leased or just by someone just wanting it for them self? This has been a very popular place for many fisherman for a long time it would be a shame to lose access.

We hunt in Wilbarger County.

November 17, 2008 at 8:41am
A comment titled: Bullets in response to a report titled: Daughters first wall hanger

I bought the bullets at Cabelas. The recoil is less then a .243 and you're shooting a 140 grain bullet in the 08. My friend bought his 7 year old son a .270 with a youth stock and the 115 grain reduced recoil loads. He shot his first deer a nice 6 point with this setup. My other friend has his 10 year old boy shooting a 30/30 with the RR loads he's killed 5 deer with them and loves shooting the gun. I did put a Simms pad on my daughters gun just for the added benefit. Anyway hope this helps. If you need anymore info let me know. Also if you would like to shoot the gun we could try to set something up.

I have my 12 y/o daughter shooting a Remington 7mm-08 with a Simms pad and the reduced recoil loads. I don't think it kicks any harder then a .410 and you are still shooting a 140 grain bullet. With the reduced recoil rounds you have a little wider range of calibers to choose from for the kids then what use to be available. So you can get a gun that they can grow into and use for years.

October 16, 2008 at 6:51am
A comment titled: Location in response to a report titled: Texas and New Mexico Turkeys

We hunted out of the town of Folsom N.M. it's about 25 miles from Raton. We hunted private land, it was pretty much a here's the place have fun kind of hunt. The piece of property that we were hunting was over 28,000 acres and we were the only one's there. We hunted together and were still able to take 4 birds in just a morning and evening hunt.

That's a good looking bird. We hunted down there a few years back, who did you hunt with?

April 28, 2008 at 2:04pm
A comment titled: Hunt in response to a report titled: Texas and New Mexico Turkeys

Trigger happy? I only shoot the ones that come in range.

You're right about the swamp gobblers being tough. There was just enough water that the birds were there, but you could still get around with just rubber boots. Of course that didn't keep me from slipping off a log while trying to cross a slough and getting wet to my butt.

Thanks everybody. I'd sure rather be lucky then good. LONG BEARD all you have to do is say the word. I would love to come over to that honey hole you've got and let you teach me a few things.

Married with children and grandchildren. Love to hunt and fish spending time with family and friends.