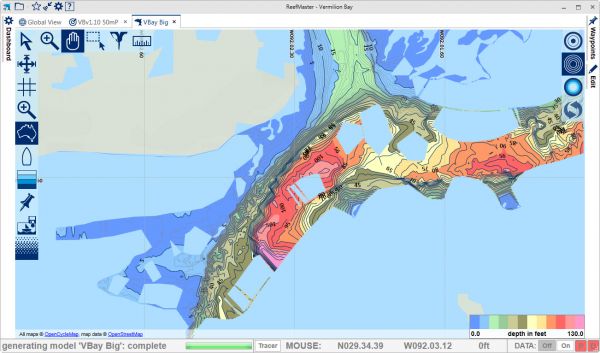 Hey Capt Paul, I read the articles on GPS and mapping and I have something that may blow you out of the water.

Over the course of a couple of months I debated on whether or not to sign up for Navionics or Lowrances Insight Genesis. The part I could not get over is the $100 yearly fee associated with the programs. Besides the money, I would have to record sonar data and upload to them for processing. In a roundabout sort of way I stumbled across Reefmaster http://reefmaster.com.au/

From this I could record my own data and process the files myself, and do this cheaper than the yearly fees associated with the other programs. Reefmaster has a free trial download so I gave it a shotand now I am addicted to logging sonar data.

I have an HDS 7 and the attached files are data I collected while out on the water. I make an average of 40+ trips a year out of Cypermort point, so I log a lot of time on the water. Since October 2014 I am logging sonar on all of my trips so every time I go I am gathering info to make me a better fisherman and my trips more productive.

I have also noticed that a lot of data, Navionics and such, are using data that is over 20 years old. I have also noticed changes in depth in certain locations changing over the last two years. This leaves all mapping chips available to todays fisherman obsolete.

Now that I am educated with the software I have reached out to friends that fish, and recruited a team to log data and share with the group. When a member makes a trip, he logs data and sends it to me. I, in turn process the file and release a new revision of the map. Our hopes are to complete Vermilion Bay by the end of the summer.

Take a look at the attached pics of Caldwell reef. We are still in the beginning stages of this project but man, think of the possibilities of this.

After getting rained out Saturday morning, brother and i made a trip to the point Sunday afternoon. We fished hammock area and different spots south of the point. Everything we caught was small, reds (1 over 16), black drum, croaker, hardheads, gaftops, and oh yeah, and a hook in my finger.

As the afternoon progressed a shower was headed our direction so we decided to get closer to the landing.

As we rounded the point we noticed multiple flocks of birds were working, so we proceeded to the closest one, the other flocks were close to the storm. As we positioned upwind we observed a couple of yahoos in a small boat with a tiller come in. Not long after every one broke off cause they motored in the middle of the birds with their rods in hand.

My brother and I laughed and headed in. I need to start carrying my camera.

Went to Weeks bay today, just couldn't take it anymore and had to go fishin.

Wind was out of the south at least 20-25. launched out of Patout and half way across the bay I had to shut it down, just couldn't take the constant shower of water and banging of the 3 ft surf.

North end of the bay was chocolate south end was muddy but trying to clear.

Ended up with 1 red 2 cats on shrimp under a cork, and 1 more red on a spinnerbait while the wind was blowing us out of the canal at about 7 mph. wanted to stay longer but had to pick up the kids.

Thought the return trip was going to be easier going with the wind, well that's what I get for thinking. GPS said 32mph and was going the same speed as the wind. by the time I got to the north end of the bay the wife was nervous. There were occasional waves upwards of 4 ft. Felt like I was driving an obstacle course. Made for an interesting and wet ride.

But it was worth it.

Went fishing Saturday and didn't catch a thing.
My buddys cork went down once and he missed it.

the highlight of the day was watching another boat land a big black drum.

Thats why they call it fishin and not catchin. 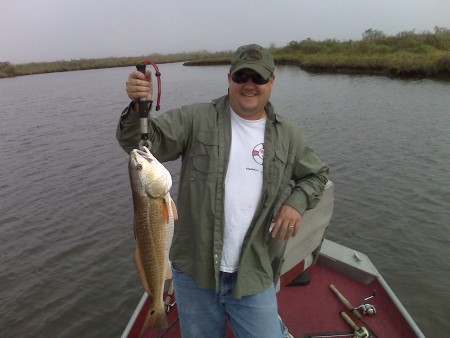 Caught this 8lb red along with 3 others on wed morning in weeks bay. the water on the north end was dirty but the south end was good. water temp was right at 60f in the shallows. 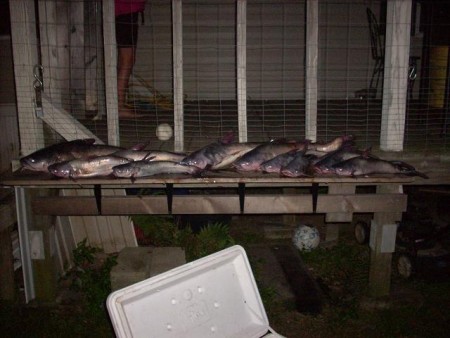 Went to a favorite spot in weeks bay Saturday afternoon. Caught 2 trout on the way in and then tossed some shrimp under a cork into a hole. The 1st fish was a 10lb cat, from there we caught as fast as we could get our lines in the water. Ended up keeping 11 fish that completely filled a 48 quart ice chest.

We were hoping for some tout and reds but 4 gallons of catfish fillets will work just fine.

We all have a story about the one that got away. My brother in law set the hook on one that left a swirl as big as a coffee table and it mangled a heavy duty swivel.

If anyone has ever fished around Shark Bayou you cant help but notice deer stands around. This past weekend there were people in them (opening day for deer). Mostly natural canals here so the private property card can't be played, no signs as well. Out of courtesy we did not proceed down a canal where we saw someone in a stand, but did observe another fisherman motoring out the canal. We went down another canal where there were no stands we could see and started to fish. A few minutes later a boat with 2 guys came down the canal and I asked if they were hunting or fishing, they said hunting and they leased the whole area. They did not ask us to leave but they looked a little agitated.

What is the general consensus here? Any rules I do not know about?

Also questioning the whole shooting over water thing as well.

you are comparing tidal water and land. Tidal water is and should be property of the State of Louisiana.

May be payback for claiming public waterways as private. Karma...

Also watch this station. when the salinity is around 4 specs are there scattered. When it hits 7 they are in numbers.

Also watch the daily sat photo so you have an idea where clean water is.

any other questions, just send me a PM.

Wow trhutson, that was a good read. thanks for posting.

I was in the area and checked this out today. on the pic it shows submerged stumps, and yes, they are there. i tried for a bit but the fish were not there.\r\n\r\nYou can go to http://webapp.navionics.com/ and look around.

November 08, 2014 at 8:34pm
A comment titled: True Dat in response to a report titled: LDWF SLAUGHTER FROM THE AIR

True Dat slick. Before the hog huggers start calling BS in Slick take a look at these pics of an old telephone pole on my property. Look at how they dug the ground out to get to the pole.

Have you seen the youtube videos of the guys shooting hogs from helicopters? Looks like tons of fun!

I would look at the keyswitch first. you can swap switches between the motors and see what happens. If the problem follows the switches then its the switch. If not, trace out your cabling, make sure nothing has rubbed through or corroded.

you will probably never find a boat perfectly suited to all you fishing needs therfore you will have to compromise in a few areas.

unless, you get 2 boats!

Welcome to Lafayette! The fishing in V bay is dependent upon the Actchafalya river stage at Butte LaRose. 10+ the water is muddy and fresh, 10- the water starts to clear up and Salinity increases. You can check the realtime conditions here http://waterdata.usgs.gov/nwis/uv?07387040
When salinity reaches 4 is when things start to happen with reds, however the salinity has not been that high since Sept. 09. It has been a real pisser this year.

unfortunately the spring thaw is happening now so the river will stay high for a while longer. you have 2 options, Go burn some gas and scout out some spotsand become familiar with the area or follow bayboats advice and head back to Houma. Sucks dosent it?

i purchased the 700 buckmasters edition 2 yrs ago. not sure what the poundage was from the factory but have mine set a 2.5lbs. (same as my match grade ruger 10/22). Reminton suggests it be adjusted by a gunsmith, its no biggie, the one i brought it to did it for free.

The most accurate bow I ever owned was the cheapest. Bear whitetail 2.

September 29, 2009 at 9:02pm
A comment titled: Acadiana Outboard in response to a report titled: Need a good mechanic

He is straight up.

it seems alot of the comments are focused around the fuel system. If you have checked and not found any problems you may want to look into the wiring. Since it seems to act up when you are at normal position you could have a bad connection somwhere in your harness.

I would suggest letting the motor warm it up let it idle and start wiggling wires. Start under the console at rhe starter swith and work your way back. once you get to the motor move the harness outside the motor. if nothing pop teh cover and go in.

I would suggest using a wooden dowel to keep your fingers free from moving parts and just poke around (not stab or jab anything). work your way back to the spark plug wires. if it is a bad connection you should be able to track it down easily.

August 27, 2009 at 12:26pm
A comment titled: offchore blocks in response to a report titled: Why we cant see the oil rigs on Google earth?

August 07, 2009 at 1:02pm
A comment titled: try this link in response to a report titled: Why we cant see the oil rigs on Google earth?

this has the platforms as placemarks.

Monitoring station shows the salinity way up. Lets see if it will hold out till Friday!!!

wishin-I-was-fishin has not filled this section yet.