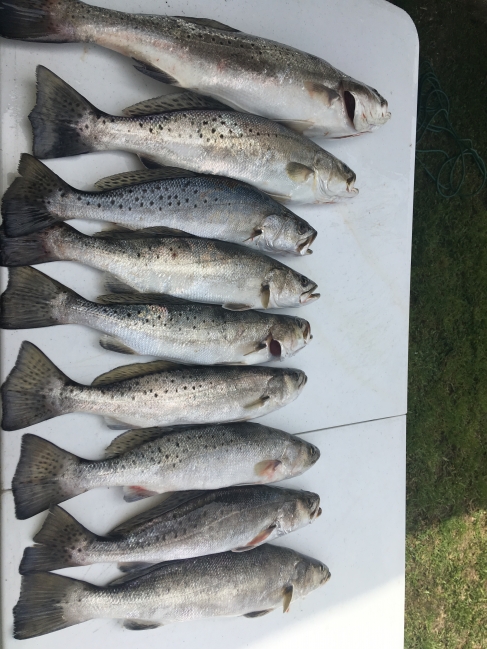 JUST wanted to let fishermen know if u fish on hwy one at the first bridge going into grand isle ,lock ur things up even ur icechest . I was fishing sat at that first bridge like I have many times before, a young guy came up and fished beside me he wasn't catching anything and I was catching some nice trout on artificial bait ,he said he didn't have any so I gave him one of mine. on about the 3rd cast he caught nice trout and was excited . I had SEVEN nice trout in my bucket and told him I was going to my truck to put them on ice so they wouldn't dry out , came bk started fishing again . he and I fished for a bit longer but fish had stopped biting . he packed up and without even a bye or ty for the bait walked bk to where our trucks where parkerd. I stayed on bridge fishing and he walked past my truck and started fishing, the way my truck was parked I couldn't see behind my truck , he was carrying a bucket with his one fish in it, and I didn't pay much attention to him after that then I noticed him cross the road behind my truck get in his ruck and leave even waiving as he drove by, I fished another hour or so and decided to leave ,as I was about to leave I decided to take a pic of my fish and was surprised as I opened my icechest to find my 3 biggest trout gone ,its a sad day when u cant even go have a relaxing day fishing and have to worry about someone stealing from you , so keep a watch on ur things while u fish because even ur catch isn't safe these days,

thanks for listening to me vent
grandisle bank fisherman

NICE birds letumgrow, man now that's a rattler for sure, congrats on a successful two hunts, great story to go with hunts,

HEY GUYS IVE never hunted turkeys in texas ,can u give me some ideas on south texas turkey hunting ,or guides or ranches you guys hunt any info would be appreciated.

THIS is true spec ,but if they needed fish that bad I would have given them all ,but as u say at least it was just fish and not expensive gear,

IAM originally from Monroe,la , been hunting and fishing all my life since I was a kid,