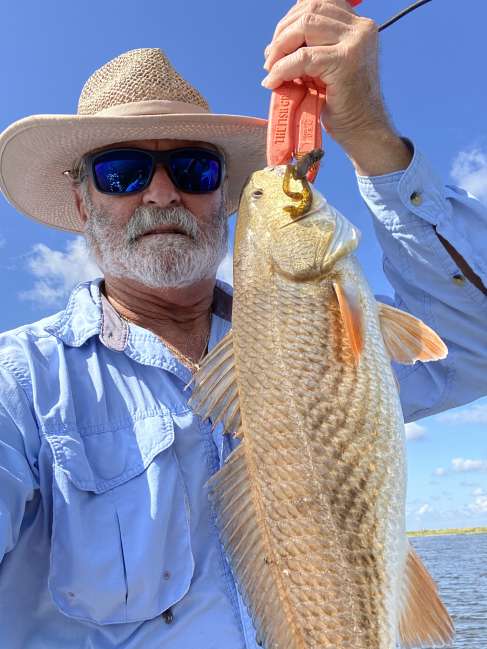 Last trip out sight casting for reds , caught 5 slots , 4 under size reds and lost 2flounders by nev setting the hook lol great morning back of Delacroix, keeping 1 red for supper and releasing the rest to fight another day ???? 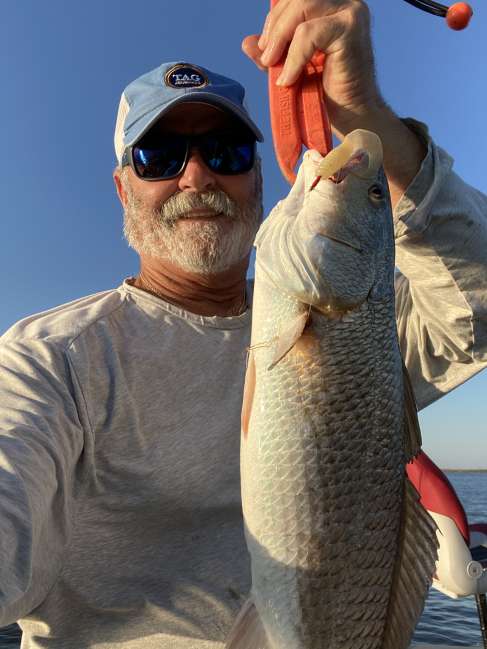 Good time out of Delacroix this week, sight casting for reds , gave them a free pass back home ????

October 12 at 5:41am
Good time fishing for reds 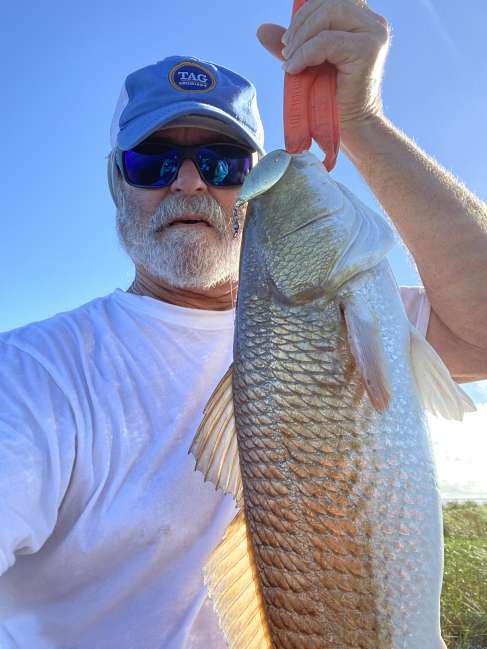 September 19 at 4:10pm
Back too the Pumpkin Patch 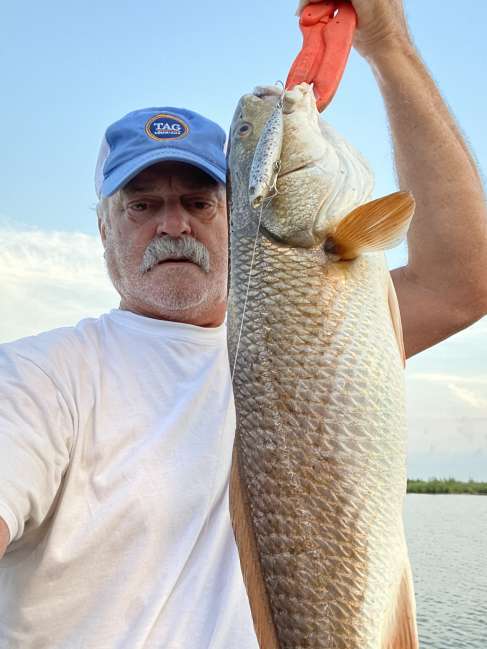 Went this morning for some sight casting too a spot in my log for reds, back of Delacroix , started with a top water plug caught 2 lost 2 , switching to a gold spoon and had a blast, catching 4 but had to release them because over 27 inches , still managed to bring 4 slots back for my neighbor ???????????

August 25 at 3:08pm
Sight casting for reds this morning 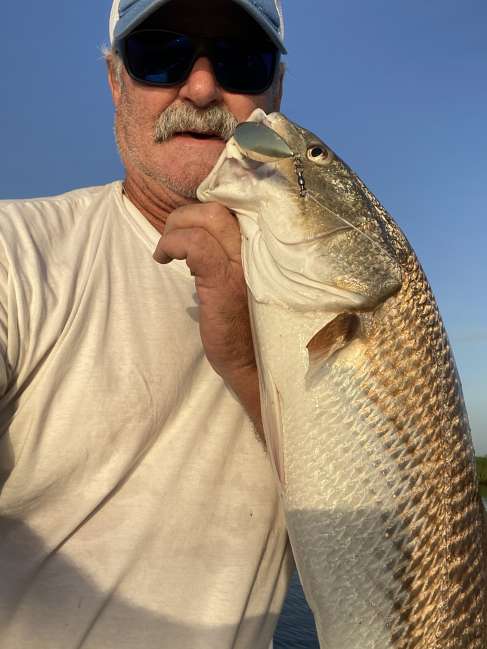 Went out this morning for a catch and release day , caught a few i released before neighber texting wanting some , brought him 2 back ???????????

August 22 at 7:03pm
Sight casting too reds this morning 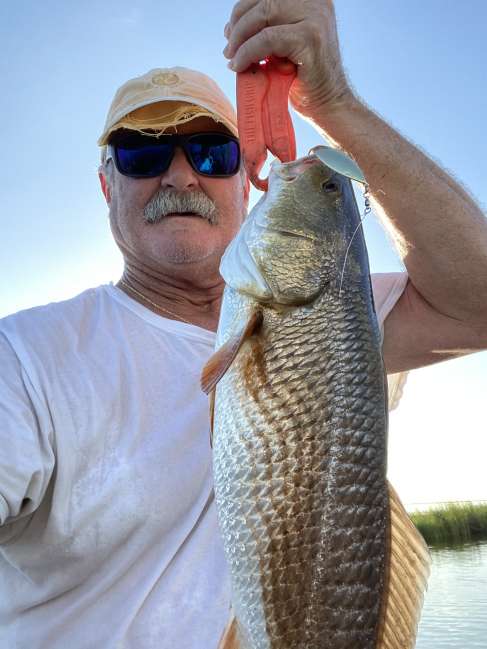 Went this morning too my of my spots, was going to be a catch and release day , took me couple minutes to get rigged up using gold spoons and top water plugs had a blast picking the ones I wanted to catch , catching 6 reds lost 2 at boat , all were released to fight another day ,got back home at 10 am a great day today but got to hot Wonât let me up load pictures ! 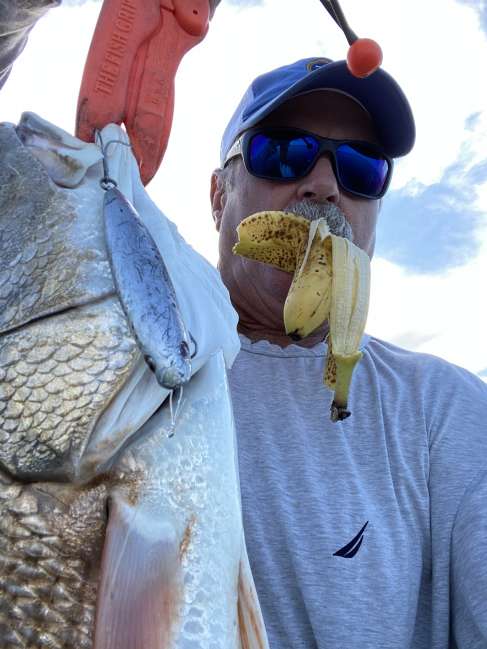 Went this morning on a bet that having bananas on ya boat is bad luck , had a blast using top water and gold spoon today , kept 5 reds for a friend ??????????? 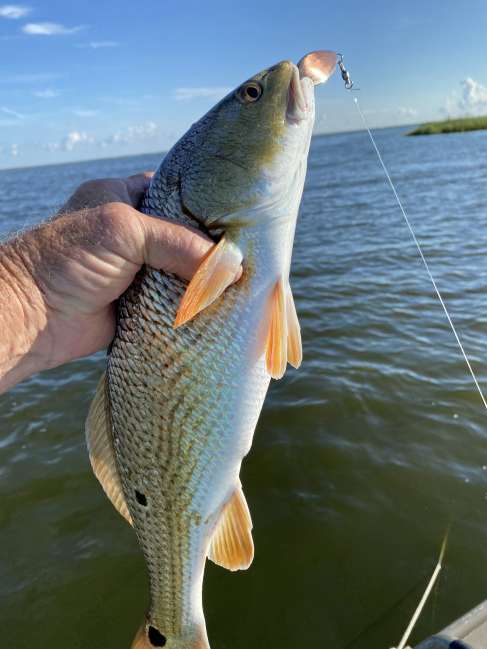 Went this morning trying a new spot , didnât wanna mess around with them big reds , luck would have it dang bull red napped my spoon ! Managed to get a look at it before o cut me off on oyster shell second spoon this week lost to a big red anyway moved over too ca deferent spot was right up along shoreline catching 6 reds all released to fight another day ??????????? 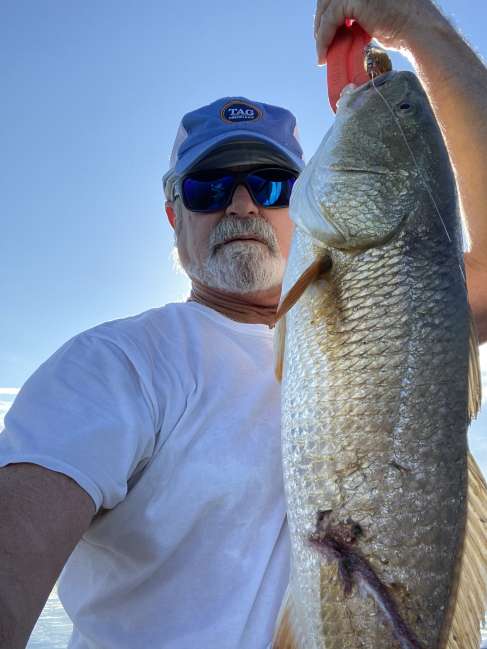 Went this morning for a catch and release day , Honey called me saying bring one red home , so I headed too one of my spots , dang bull reds were cutting up chasing mullets I threw spoon and found out what they can do , had reel screaming line peeling off fast , got it close to boat threw hook , turned right around and tossed it right back into the mix only a second and red was screaming line off again , finally got it to side of boat used gaff and liped it , took pic and revived it letting it go have a big shark bite mark on its side, had to leave that spot plum worn out , ended up catching 4 reds lost 3 and a spoon gave one red too , two fellas watching me kept one red for tonightâs supper ??????????? 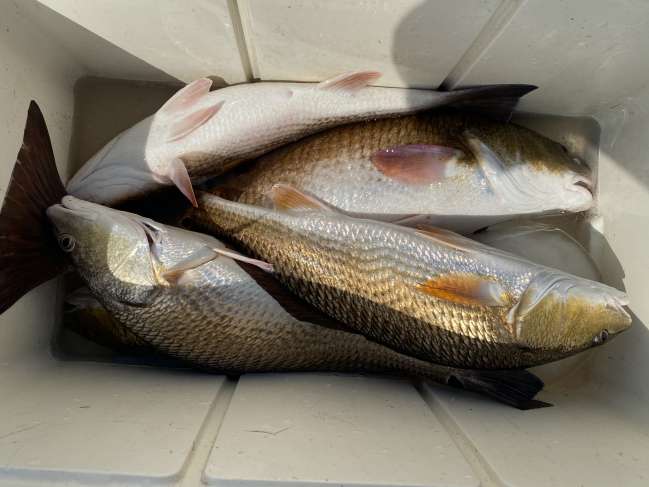 August 11 at 7:17am
Nice to be retired canât get enough fishing in ! 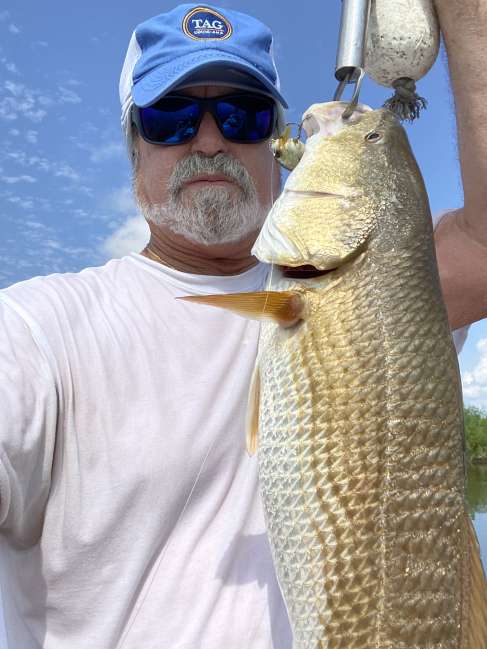 August 07 at 1:42pm
Sight casting for reds this morning 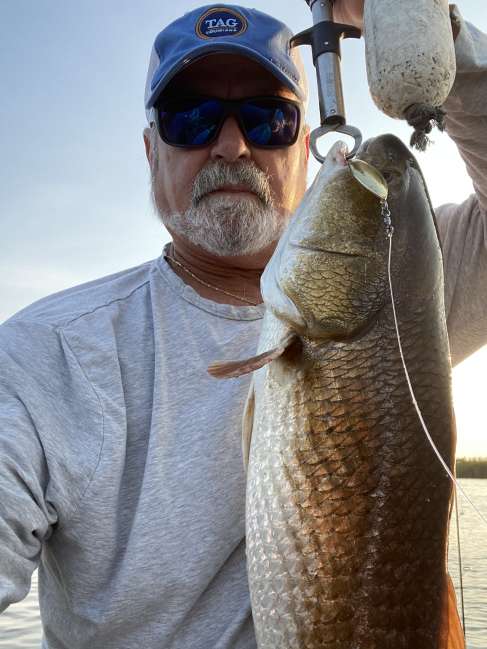 Went to my spot this morning catching 9 reds kept 2 let rest go to fight another day , sent Mandevillian pictures , won?t let me post only one photo ??????????? 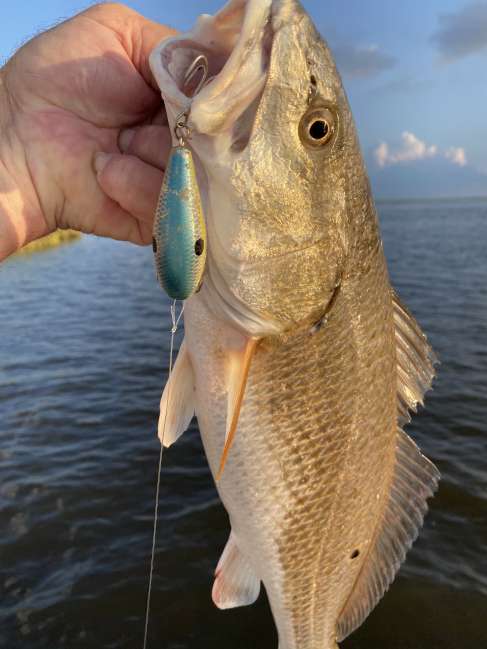 Went out this morning towards Delacroix heading back to lake Amedee shorelines , had a little north wind blowing but no tide I could see , anyway I ran along the shoreline till I was in the grass , only seen a few reds cruising the grass managed to hook up on one using spoon, figured being the water was low again reds were right outside the grass line , switched to a wake bait catching three , after that vi put a rattle trap on and hooked a few but lost a couple in grass , did get one into my boat , kept 2 let rest go , also nailed 2 bass on spoon, thought it was reds cutting up in grass , put that spoon right in front of them couldnât resist , started getting hot at 9 am picked up and headed back in ??????????? FYI will only allow one photo now or it kicks ya out of system ? 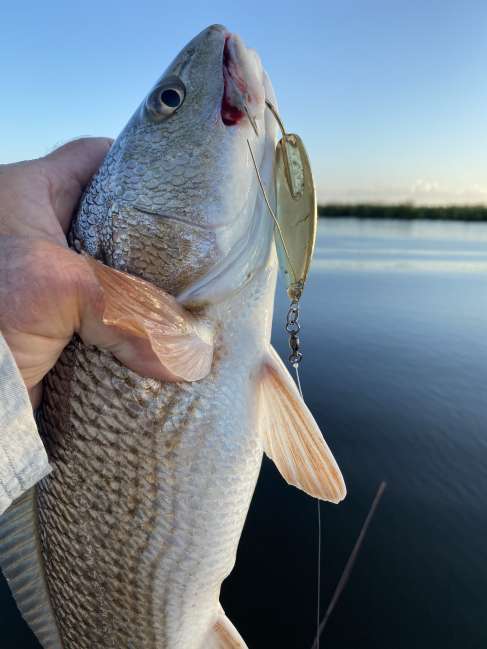 Went back out yesterday morning sight casting for reds, using the spoon again had a blast , caught 11 reds all running around 20 inches , keeping 2 for supper and released the others to fight another day , great day for sight casting ??????????? 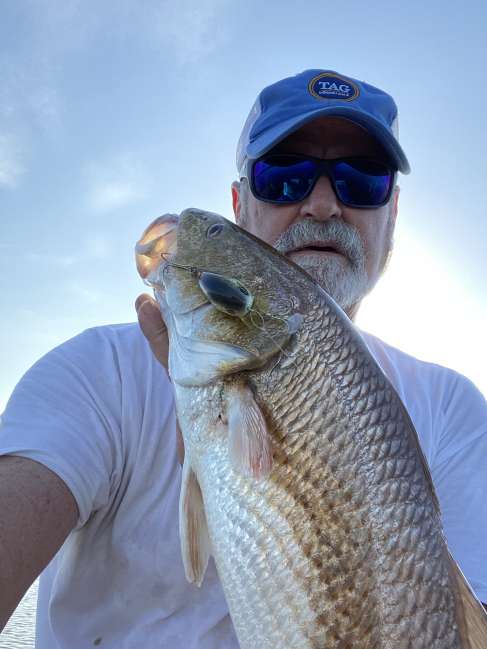 At last minute made a decision to go, Honey gave me a kiss and said don?t bring anything back home ????, heading back out I could hear reds smashing bait in the grass , put on a wake bait aiming at a red that just exploded on something , perfect cast bang it was on , water was starting to roll in as I was cruising the shoreline grass , ended up catching 3 nice reds lost 3 to grass , for some reason can?t put all the pictures on this post ? ? ? ??????????? 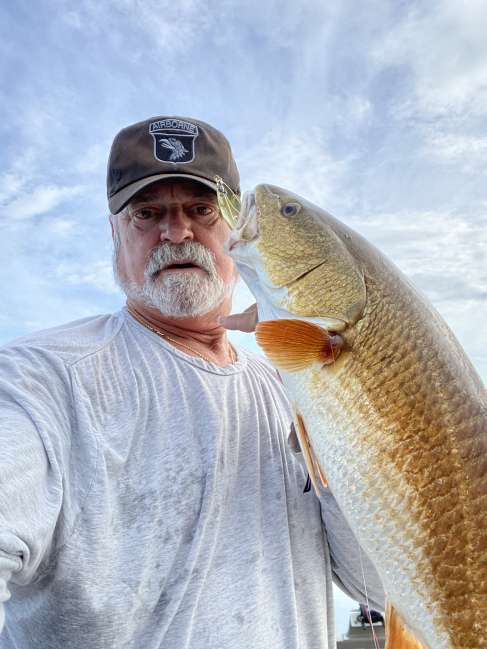 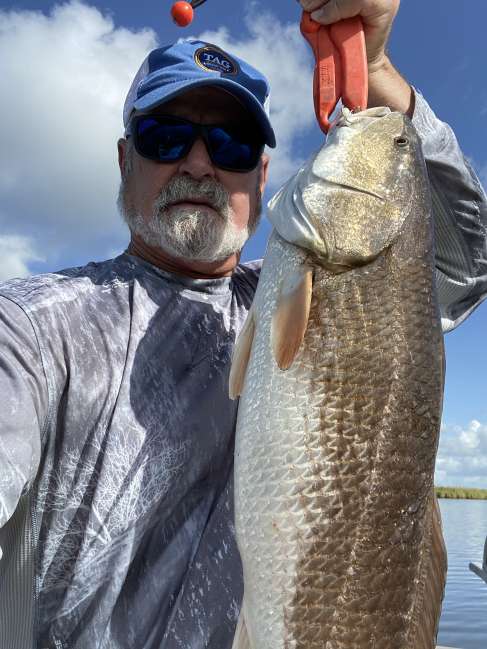 Ran out this morning water was back up and coming back in, so headed to a new spot that I hadnât fished this year , but knowing that on my log book it was just about ready , using a rattle trap and gold spoon had a good time , only kept 2 20 inch reds and released 7 to fight another day., great day to get back out there ???????????

July 15 at 4:35pm
Back in the Pumpkin Patch this morning 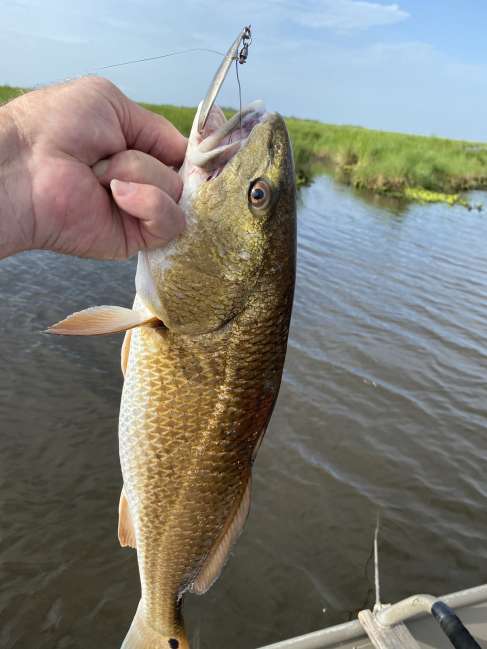 Was gonna go crabbing this morning but after checking tide decided to go chasing reds , headed to a spot I knew reds would be lurking , staying in one place reds were all around my boat , took me short while to wrap up 5 nice reds going too a friend who can not fish anymore will enjoy these , gold spoon was the rule today ??????????? 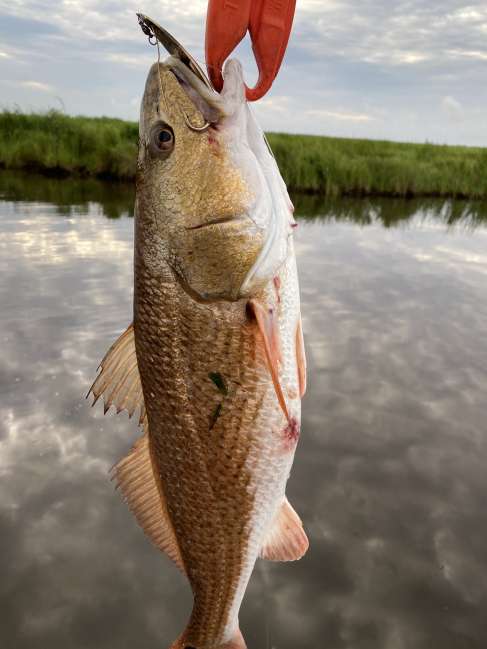 Ran out towards Delacroix this morning, tide was just starting to come in no winds to be seen or felt, could see reds chasing bait in the grass shorelines, using a gold spoon and a black plastic H&H cockahoe it was game on , catching 8 reds lost 5 at boat running into grass breaking off , I kept only 1 red for supper letting rest fight another day ???????????

July 08 at 3:24pm
Playing with the Reds This Morning 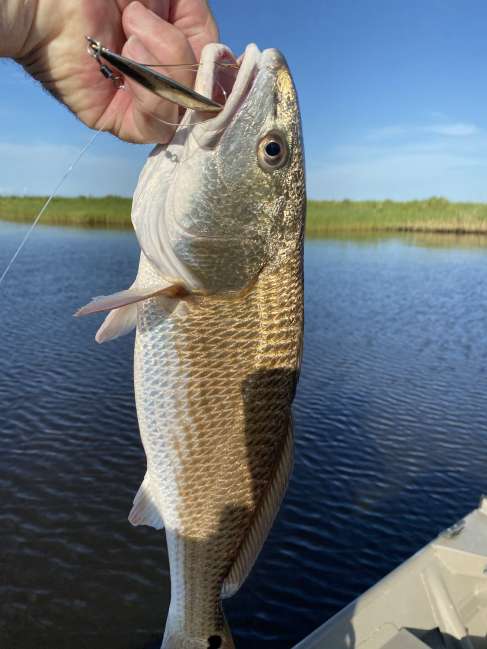 Headed to Delacroix this morning , winds were blowing out of the west, tide was still falling so I headed back too a area in duck ponds but water was falling hard so I had to get out of there , always have a back up plan, moving too another area reds were chasing bait as it was coming out of the grass , winds were playing havoc with my casting so I moved to the shoreline switching to a spoon , lost a few but managed to boat 4 reds I let go did catch a nice flounder on a spoon first time ! Keeping only it for our supper this evening , got back in before the heat built up , great time again ! ???????????

Yep Iâve been posting on several sites on Facebook : Nothing but redfish , Louisiana fishing reports , La.sportsman has gone down , real-time not worth the effort trying to post a report and it doesnât get printed !

Mande : nice trout , did ya bring ya fly rod up with ya ? Been getting new roof on the ole homestead , hope they have it completed today , wanna get back out there chasing them reds tomorrow, weatherâs been great cool morning ls lite winds , enjoy yâallâs time up there , send us some more pics ???????????????

BlueShamu ; thanks reds still abound but grass beds have been up rooted , the marsh has been rearranged again worse than what Katrina did , I would be very cautious while running around some of the bayous , seeing mud lumps smacked dab in the middle of some where it used to be 5-6 ft deep , Hopedale is up and running but as for the Delacroix area the roads were still slick with mud in spots , only to get worse if rain comes down , ya might wanna call before heading that way to see who?s back open , good luck I?ll be heading back out as soon as my new roof is done ???????????????

BlueShamu : glad ya made out good , down over here I St Bernard parish we didnât do good outside of the Protection levees, from some of the pics Iâve seen, was told by a friend that IDA was worse than Katrina outside of the levees , I canât fathom that in my mind yet! We had significant destruction of our marshes from Katrina , just hope thereâs still going to be a place I can go fishing one day ???????????

BlueShamu : glad ya made out good , down over here I St Bernard parish we didnât do good outside of the Protection levees, from some of the pics Iâve seen, was told by a friend that IDA was worse than Katrina outside of the levees , I canât fathom that in my mind yet! We had significant destruction of our marshes from Katrina , just hope thereâs still going to be a place I can go fishing one day ???????????

GB3 : thanks. been catching a few on top water as well lately , had one hit plug sideways and leaping out of water like a bass , that was a first for me. need to get a GoPro it was so dang cool seeing that today ???????????

Thanks Mandi : yep the gang needs to make a trip down my way in da future, Oh and for the non believers hereâs my banana pic ???????????

Couple other ones today

Mandi: nice mess of reds , donât know whatâs going on with sportsman site. reason why Iâve been posting on FB , Iâll try and see if if will take mine ???????????

Thewizard7 has not filled this section yet.