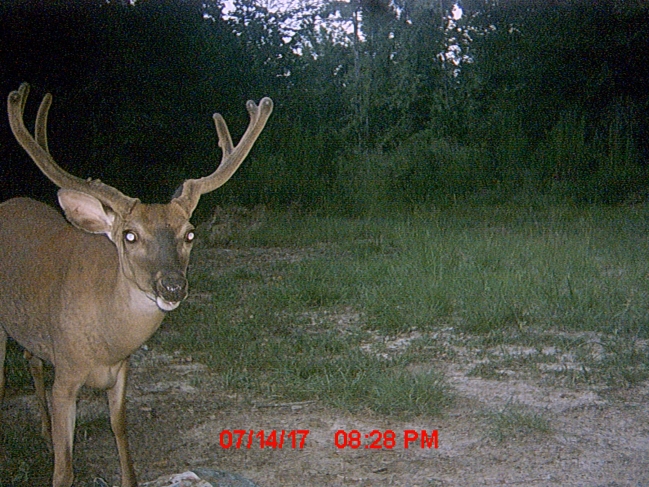 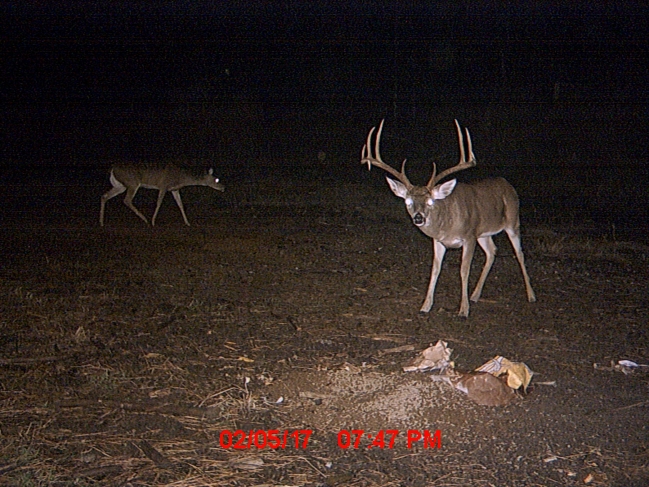 Put out a cam to see if any bucks made it thru the season. Whats the score on this one? 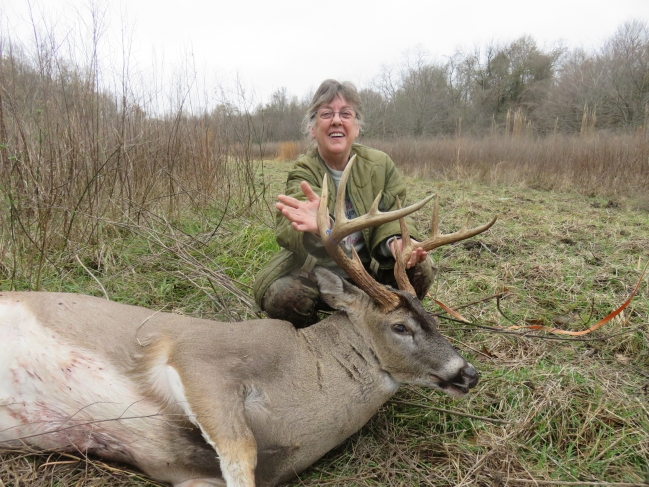 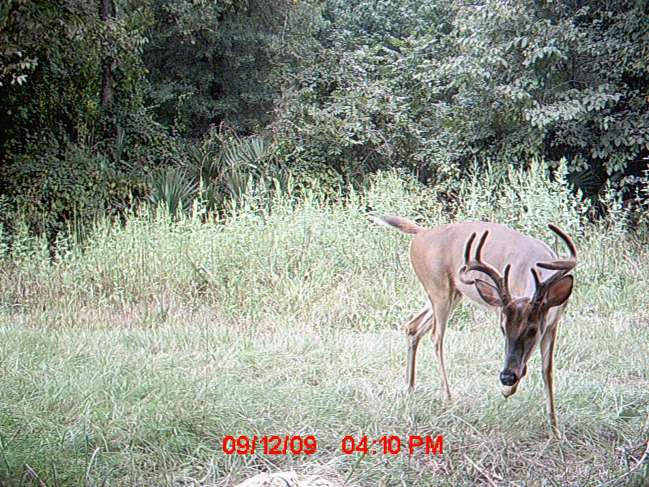 The first deer is from Tensas parish and the other 2 are from piney woods in western Ouachita parish. 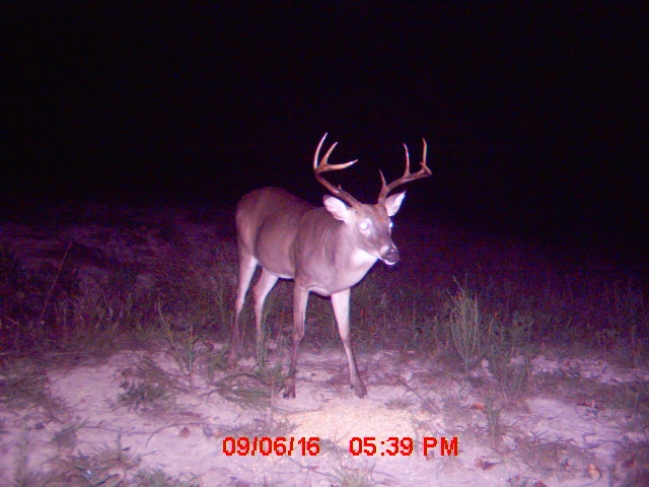 Back in the spring I planted 250lbs. of powerplant. I cant show ya'll some pretty foodplots, but I can show ya'll where they went. 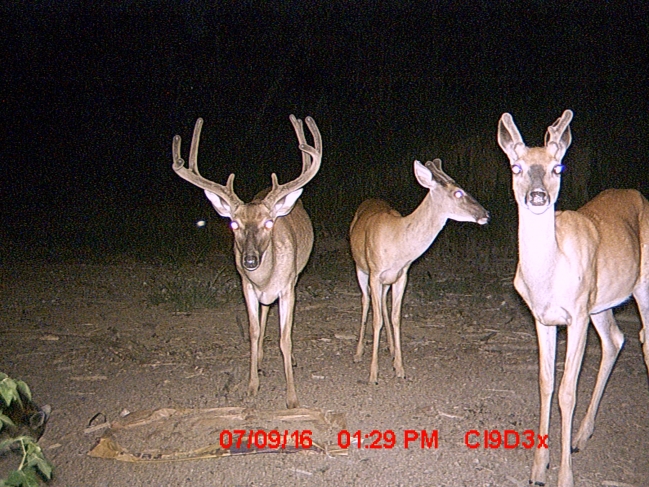 Age and score this one. When I tried to load another pic the boxes say, clear photos, change photos, submit, no add photos. Thanks for any help. 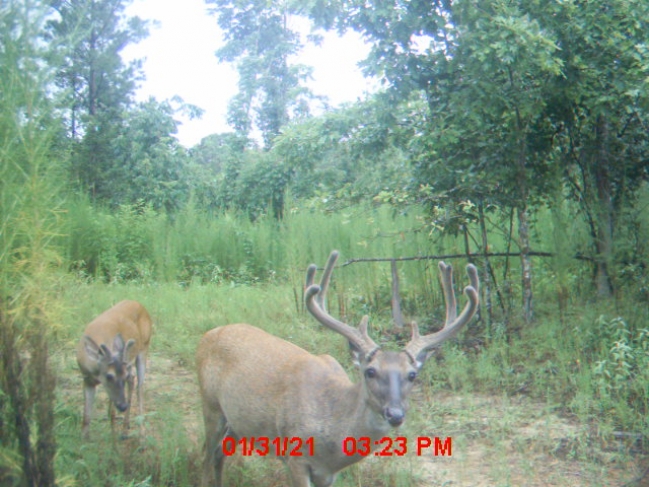 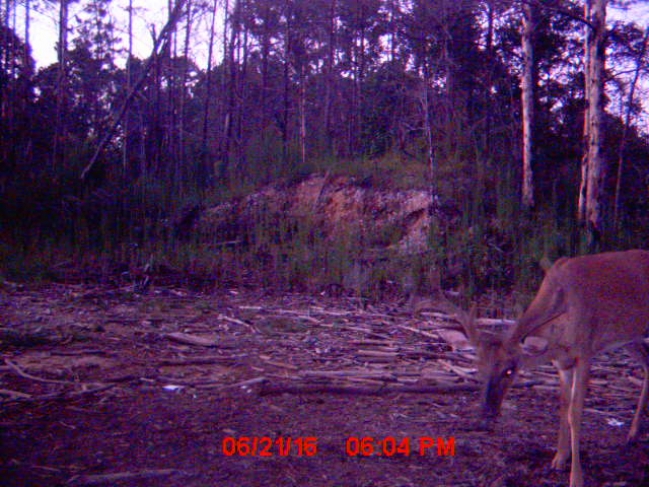 Only lets me load one pic at a time? 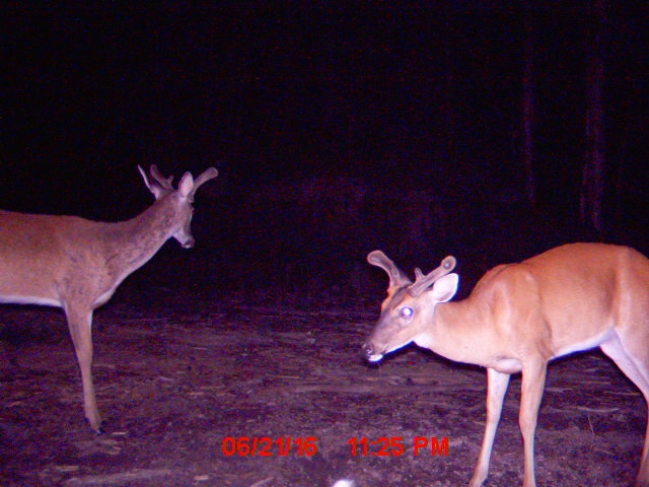 Got a few growing. 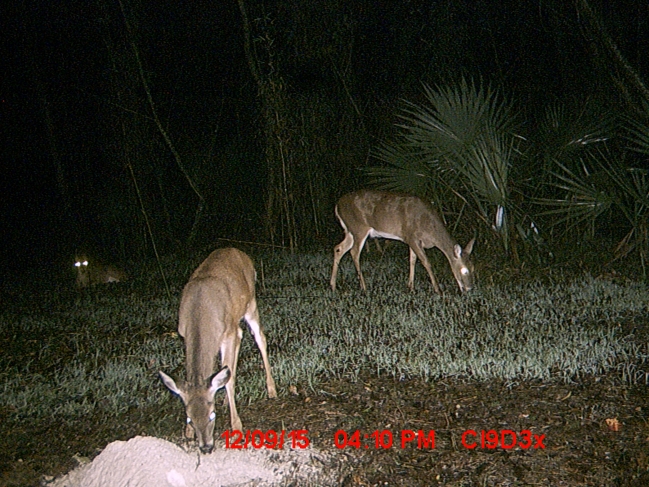 About a week ago i Planted some wheat in a wooded area since the leaves have fallen . Deer really love it when it first comes up and doesn't take them long to find it. 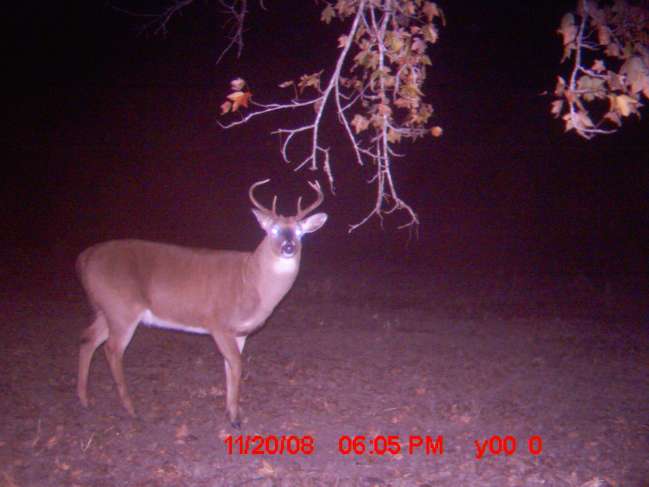 How old ya'll think these deer are? 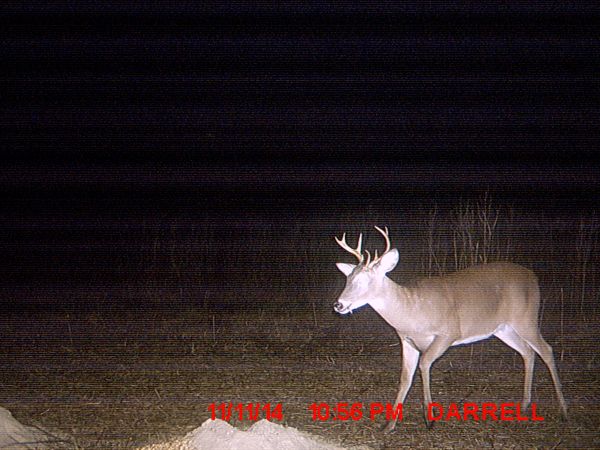 Got a pic of a nice 10pt with long bladed browtines. As I was looking over pics from last year to try to identify him I noticed this small 8pt. has 3 separate burrs and beams. Sure hope he made it thru last year. 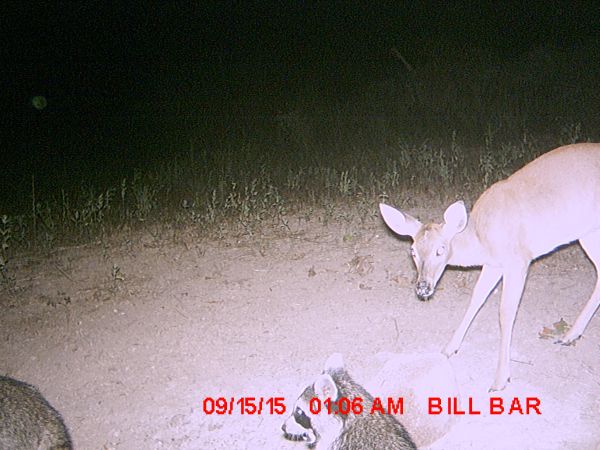 I have about 7 or 8 does with single fawns this year. Talked to two other people that have noticed the same thing. This is the first time I've seen more than 1or2 singles. I've heard that bucks seem to have spots in lines and all these are large for their age and seem to be bucks. Anyone else notice this? 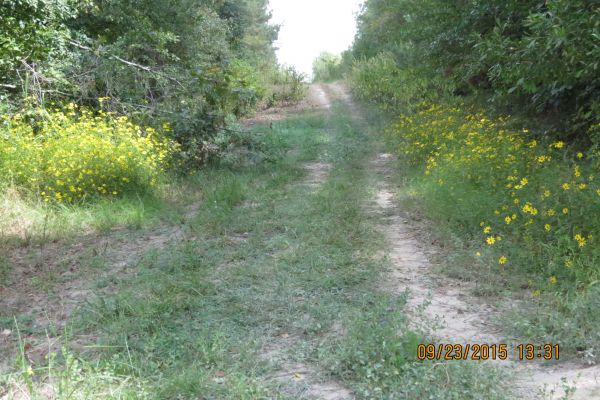 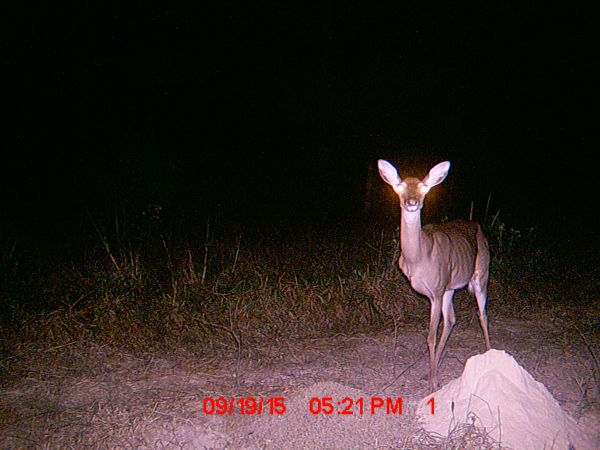 Amazing how these animals can survive serious injury. 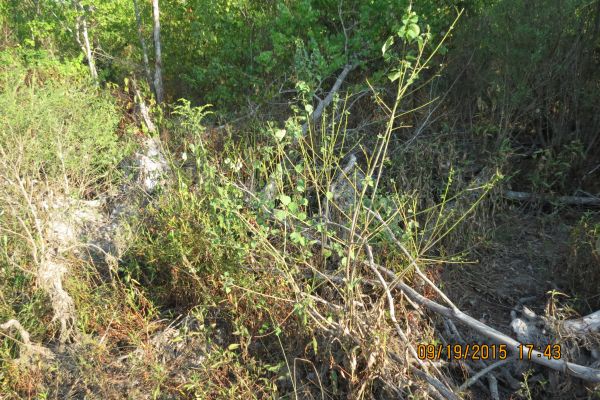 Chinese tallow trees are highly invasive trees and will quickly crowd out anything else. For a long time I wondered what they were good for, then I googled em. I knew they had beautiful clusters of sweet smelling blossoms but never thought of the bees they feed. Bees are absolutely vital to us and that alone makes them valuable. But I discovered deer love to browse on the young shoots. The problem is they grow so thick, so fast that they soon get out of reach. Also, I found a lot of big ones growing in pure stands of pine where nothing else grows. That's when the light bulb went on. Hinge cutting of trees is where you cut halfway thru a scrub tree about 5 ft. off the ground and push it over without killing the tree. This does several things-creates a living brushpile in otherwise open woods, and then new growth comes off the now vertical trunk and is again within the browse reach of deer. The problem today there is very few trees that are considered culls. I promise if you ask your landowner or timber company if you can cut a Chinese tallow tree they will love you. So you can turn a terrible problem into a valuable asset. Also deer absolutely love elm trees and they have very little value so they make another great hinge tree. Don't forget those green bushes that grow in low areas, around gas wells, and in crp fields. You can easily run over these and break them down to within deer reach and they are one of a very few plants that have green leaves in January-march period. In crp land this can triple the amount of available browse without spending anything on planting. Some pics of tallow trees. 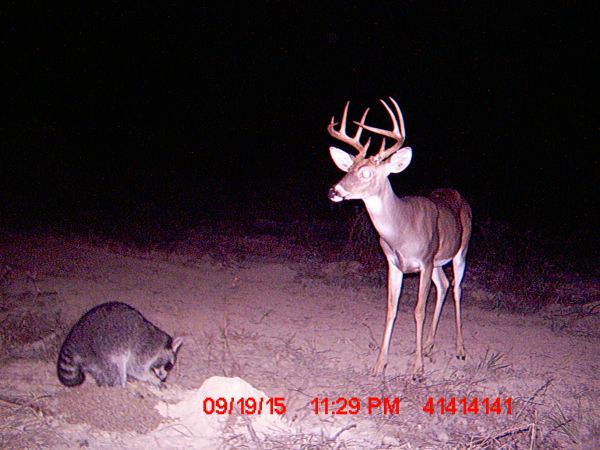 3 yrs, ago we got couple hundred acres of pine forest. We thinned the trees, planted foodplots and started feeding rice bran. The first 2 yrs. I only got pics of small bucks, mostly long spikes. This year we have a 9pt,2-8pts, 7pt,3big 6pts, 6 big 6pts that are each missing a browtine, and half a dozen small bucks. This is centered around 3 acres I planted in peas this summer. If anyone would like to read about or look at more pics they are posted on facebook under Clementine Wildlife Resources.Im not trying to sell anything or promote any product, just posting my experiences. 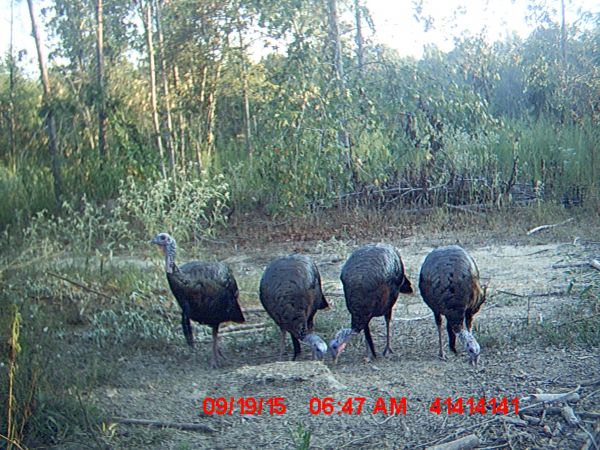 Anybody see a double beard on the left hand bird. They took 13 pics standing in the same line. 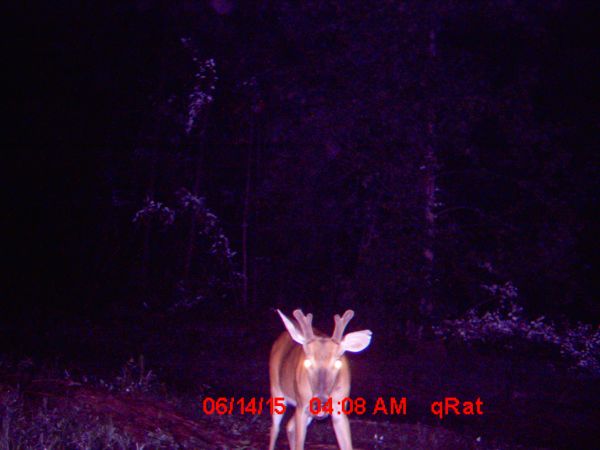 Some piney woods bucks starting to show their horn growth. 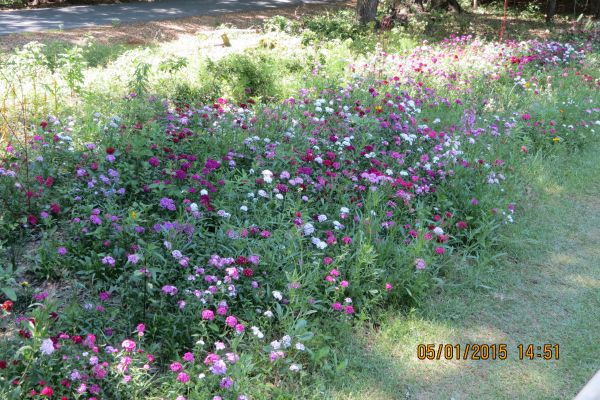 In the summer of '13 I found a wildflower that deer were eating up. As I was trying to find what it was I decided to mix up a wildlife foodplot blend for all wildlife summer or winter with perennial weeds(wildflowers). They are looking good.Planted another, larger plot.

In my experience deer don't like turkeys, but just when u think u know something.

These are early born, piney woods fawns. Look how much bigger they are compared to late born ones.

Bret, I couldn't recommend those guys. However I got Shaun Moore, 318-594-2900, he has a machine with a mulcher, blade to clear trees or move dirt, and stump grinder to clear a right of way and his brother and son put up the fence. They will do a great job.

Fawns in my area were born on the night of the last full moon. Got my first pics of one out with his mother.

My neighbors on my west and south fenced us out years ago. Because of too much trespassing on our east we did fence that. We also have a low fence on our north along a gravel road.

February 24, 2017 at 6:40pm
A comment titled: Re: leftovers in response to a report titled: leftovers

Finally got another pic shows the length of his main beams This deer seems very shy of cams. Looks like he has a buddy I do have pics of so maybe he will hang around We did very well in tensas but nothing like this deer.

We did very well in tensas this year. 6 bucks, 4 over 200lbs one over 250. Four yutes killed their first buck the last 2 weekends.

February 09, 2017 at 7:10pm
A comment titled: Re: leftovers in response to a report titled: leftovers

This is in southwest Ouachita parish. Hard to tell in this pic but he's a 10pt. Several have said they believe mid-160's.

These are the pics I meant to add from last night.

Thanks Duckslayer, its always good to get different opinions. You were spot on with the first deer, he was killed and aged. After looking at many pics I believe the others are the same age. My problem is the velvet 8pt has so much bigger horns than any 31/2 deer ive ever seen.But if you compare their bodies they seem to be the same age. Here's a couple more pics.

Black Bayou NWR is kinda small but has some big bucks. Russell Sage and Ouachita WMA's south of I-20 has good amount of deer and huge bucks. These are bottomland areas with good access. D'arbonne NWR northwest of Monroe has both bottomland and upland pine forest and lots of deer and good bucks but deer are smaller on average there. All these areas have limited rifle hunts so bowhunting is good. About the only public around Ruston is Kisatchie NF north, good hunting for hill deer. Shreveport has Loggy Bayou, pretty small and more crowded, and Bodcau WMA which is pretty good hill hunting.

October 05, 2016 at 8:00pm
A comment titled: Re: foodplots in response to a report titled: foodplots

Some more pics. Thanks Huckelberry, I finally got more than 1 to load.

The first spinning reels had manually operated bails. Most now use the handle to automatically close the bail. This causes the line to twist and when you cast the line comes off in a tangle. Closing the bail manually will help to prevent this.

Thanks for your reply Tony, sorry I confused you. Its much easier to check hottest reports on my phone but I just assumed ya'll would want people to spend time browsing/shopping/guide viewing. When I open on a pic with my pc then hit submit it returns me back to the start, then I have to click on pics, select a file, scroll thru hundreds of pics, select one, click on it, open it, then start the whole process over, the other way it stayed on the same file so I only had to scroll thru pics to find another. Several times I have gone thru the process for multiple pics then it only posts the last one I picked. Thanks for any help.

I have had a feeder set up on a foodplot in a central location in a pine cutover for a couple years. I believe I moved my cam to a staging area closer to their bedding area. The funny thing is I was looking for a last years deer and thought this deer was coming from the opposite direction.

When I post a pic on my pc it goes back to the start and I have to start the whole process over. Ya'll may get a lot of views but now it takes me about 30 seconds on my phone to check it. I used to browse a lot but now it only takes 30 seconds to see but 30minutes or more to post pics. Iused to love to read guide posts but without pics I seldom click on them now.

Emerson Lake, as its known by the locals, is a private lake owned by 4or5 landowners with one private ramp. Its 11miles west of St. Joseph, La. There are no facilities. Its about 1mile long and 200yds. wide with a depth of 6ft. Its loaded with huge crappie and tons of channel cats. The bass fishing is good on wobble-head worms early mornings in the summer. The crappie can be caught on jigs, tube or hair and a nibblet. Two of us catch over 100 any morning before dinner, but it can be slow in the afternoon. In the hot summer we have an oxygen problem so the middle of the day when the wind is blowing causes them to feed.

Tried again, will not let me load pics. I very much enjoy Mr. Larry Reynolds comments and insights on ducks. It would be nice for someone like that in deer hunting to do what he does.

Bob, ive spent the last month clearing up new ground to plant some powerplant so riding a tractor all day does give plenty time to think and since deer management is my life that's what I usually think about. However it took me longer to type this than to think up that rhetorical question. Too much time thinking? wow, maybe you should try it.Thanks deerslayer, ive been having a hard time posting pics on here since dec. but I expect to get some big ones soon...

Yeahuright, that's why I ask so many questions. Like for instance deer suffer about 10% natural mortality. If you have 100 deer on an area that's recommended to have 40 by a biologist. Due to 100+ days of drought, an outbreak of ehd, and then record flooding that started in early march and lasted into mid-summer, the high density deer suffered 25% losses while the low density herd only lost 10%. I still end up with twice as many deer. Whats wrong with this scenario?

hunt r has not filled this section yet.