FOODPLOT in response to a report titled:  FOOD PLOT

I need some advice on flod plots. I have a small food plot that I want to plant again this year. Around 1/4" to 1/2" acre counting my lanes. I planted it last year with wheat and oats. I did not do any soil testing, but I did put fertilzer and prepared it pretty good with a pull behind plow on my 4-wheeler. It came up ok. and it the allowed my 8 year old to see some does while hunting with me. The thing about my food plot is that the area does not receive full sun early season, but once the leaves fall it receives a moderate amount of sun. I want to plant something to be an attractant and I'm not worried about biulding hugh racks. I want my boys to have a better chance seeing deer when we go. I am thinking of planting oats, wheat, and australian winter peas. Any advice would help. 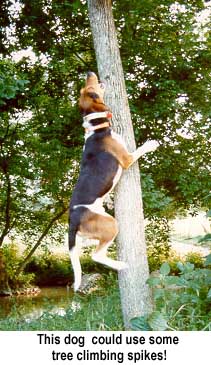 Duck7777 and Lungshot have advised me to reduce my stock of hounds because of the banning of dog hunting. I thank you for your concern (you really do care!) Although I am closed minded and immature, I have decided to listen to the great whitetail hunters. And now I am offering either of you an offer you can not refuse. Straight from BORDIX hound kennels I have this 2 year old male walker with all it's shots, he has has a clear chop mouth, will run daylight to dark and then some, good homing dog, and very aggressive, he has a very cold nose and can trail that elusive still hunter even if he goes to his stand 3 hours before daylight. With the nose on this hound you could literally roll out of your bunk at 8:30 am and still have that mature still hunter hanging at the camp by 9:00am. Of course you must insure that the still hunter has 6 inchs or better. I have included a nice photo of this champion hound, sorry the photo does not show the prize game (that still hunter can climb like a ring-tailed limur.) Only serious offers please!

The only topic we all can truely agree on is hunting in general. So lets just talk about that, we only have a few days (LOL) before the season starts so I figure we could all use advice from each other to help each of us take that buck and hopefully those bucks. (I am not concerned about method of taking him and number of points) I have an 8 year old son, last year I purchased a youth model Rossi 243 rifle after purchasing it, and after shooting it I relized that it kick's alittle to much for my son. Has anyone purchased this gun or another youth model rifle they recommend for a small youth? I am also considering modifing the stock to fit him better, not to worry about him outgrowing it I also have a 5 year old ready to take it over as soon as he can. Are there any local gun shops in Lafayette that will cut and fit a stock? Let's all have a good upcoming season.

Crankbait,
I have sent you a e-mail thanking you. But I also wanted to post this. You are one of few that would try hunting with quality dog hunters. The ones that also care about conservation as much as any still hunter. Thank's for sharing with us.

HEY BOLO, I LIKED YOUR POST ABOUT 'SHOW ME THE MONEY' EVERYONE THAT FEELS DOG HUNTING SHOULD BE OUTLAWED SHOULD REMEMBER THAT THERE OWN GRANDFATHERS USE TO HUNT WITH DOGS (IT'S A TRADITION) ONE THAT SHOULD BE KEPT ALIVE AND WELL. IF YOUR OWN GRANDFATHERS DID NOT LIKE UPHOLDING TRADITIONS YOU WOULD PROBABLY NOT BE A HUNTER TODAY. THINK ABOUT THAT!!! IT'S ONE MORE THING THAT WILL NEVER BE ALLOWED BACK ONCE IT IS LOST. BE CAREFUL WHAT YOU WISH FOR BECAUSE IT MAY COME TRUE, THAT'S A SAYING YOUR GRANDPARENTS USED ALOT. I WILL KILL A DEER BOTH STILL HUNTING AND WHILE RUNNING DOGS. HOW MANY OF YOU OUT THERE THAT OPPOSE DOG RUNNING CAN TELL ME THAT YOU WOULD NOT SHOOT A DEER IN FRONT OF SOME GOOD WALKER HOUNDS BECAUSE IT IS NOT THE 'PROPER WAY TO HARVEST A DEER' IF YOU SHOOT, WELCOME THE THE DOG HUNTING WORLD. TRUST ME IT'S A GOOD FEELING, AND THE NEXT TIME YOUR ON YOUR STAND AND HAVE THE PRIVILEDGE TO HEAR SOME HOUNDS IN THE WOODS DON'T LOOK IN THERE DIRECTION KEEP YOUR EYES ON YOUR FEEDER, YOU DON'T DESERVE TO SEE EVEN A FLAG OF A DEER IN FRONT OF SOME HOUNDS. I ONCE HEARD FORM A VERY WISE HUNTER 'THE BEST THING TO PUT IN A FOOD PLOT IS -ALOT- OF VERY GOOD WALKER HOUNDS.'

I HAVE OWNED A 1999 YAMAHA 350 BIG BEAR. NOTICE I SAID (HAVE) OWNED. I HUNT IN WATER AND DEPENDING ON MOTHER NATURE SOME TIMES ALOT OF WATER, AND THE FRONT AND REAR SHAFT SEALS WOULD LEAK (NOT OIL OUT BUT ALLOWING WATER TO MIX WITH THE GEAR OIL) ANOTHER THING I DID NOT LIKE ABOUT THE YAMAHA IS THAT ALL THE ELECTRICAL SYSTEM TO INCLUDE THE BATTERY WAS EXPOSED TO THE MUD AND WATER UNDER THE REAR FENDER. THERE WERE PLENTY OF TIMES WHEN WE WOULD MAKE IT BACK TO THE CAMP AND I WOULD BE CHANGING THE GEAR OIL IN MY BIKE WHILE MY BROTHER-IN-LAW WOULD BE KICKED BACK BY THE FIRE WATCHING ME. BY THE WAY HE RODE A HONDA ONE YEAR OLDER THAN MINE. NOW I OWN A HONDA 350 RANCHER, AND WE ARE BOTH KICKED BACK BY THE FIRE. I HAVE HAD NO PROBLEMS WITH MY BIKE. ALSO THE YAMAHA I FOUND TO BE VERY COLD NATURED.
GOOD LUCK.

How much lime to put in a 1/4 to 1/2 acre food plot?
I have never put any and have not planned on having the soil tested. Where can I purchase Winter peas and Rape seed in the Lafayette / Broussard area? Keep the info. coming, I am sure it will help not only me but everyone on this site. Thank you.

Does this hunting club run dogs? What is the name of the hunting club? I also hunt in Avoyelles Parish and maybe I can help you find the hunter your looking for.

Pictures are like horns, you can't eat them. Send some pictures and some legs. Great hunt. Later.

Have plenty of water with you to drink. Should be a hot one at 12:00 anywhere your hunting doves.

Cajun2: I Still hunt, and I hunt with my dogs. Trust me the deer have not gone anywhere, they are still in the area before, during and long after any dog or dogs have run through the area.
I have killed deer before any dog was turned lose, when the dogs were running other deer in the area, and finally I have killed deer minutes after the dogs have passed running other deer. Deer will not leave the country just because they hear some dogs running, do you think they haul A--every time they hear a tree fall 'NO' They have all heard it before. Be patience, God knows the deer are.

Cajun2: You accomplish more by 3:00 am than most hunters accomplish all day. Just think what you could have killed in the day light.

Hell of a job Claybuster, I don't know how you and your fellow dog hunters were able to hold your dogs back (My brother-in-law and I could not have done it) but it shows how the still hunters don't mind a good pack of hounds. Out of those 30 and 40 still hunters waiting for those hounds how many would you say have signed that petition to ban dogs? Ask the same still hunters to put in a few dollars and some work help raising those hounds and watch them run. Hat's off to you.

PLEASE POST THE FRONT VIEW OF THIS MONSTER. HE IS BIGGER THAN HOGZILLA!

You see if you let them grow they will end up killing themselves. Very nice picture.

I never received your e-mail, but of course my computer does not receive junk mail. Maybe you were too busy shooting dogs and eating them with alittle garlic. (That's chicken S _ _ _!) You and lungshot keep mocking everyone about the small does and the taking of immature bucks maybe that's why you have developed a nice recipe for hunting dogs. I have not seen any of ya'll trophy buck pictures.

BUCKINRUT has not filled this section yet.