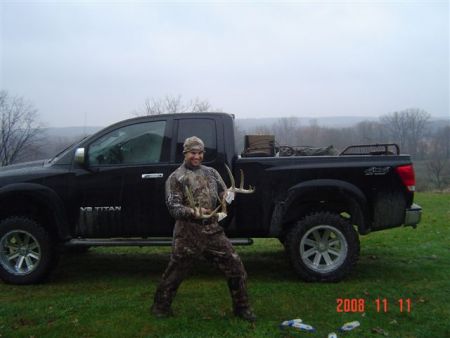 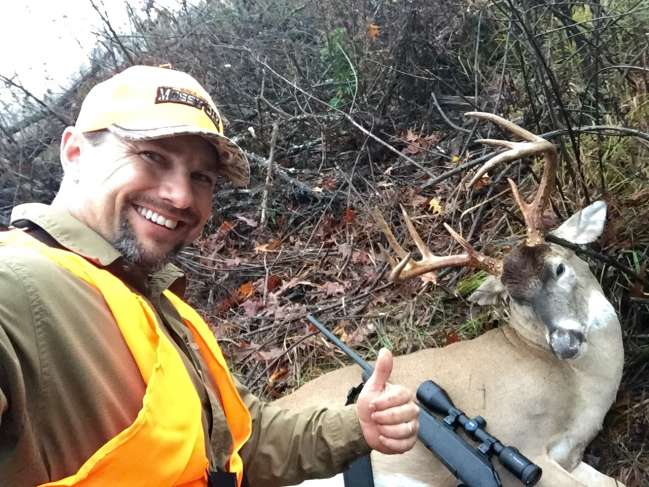 It was a hot, foggy, & muggy morning on Dec. 26th in Mississippi, but that didn't stop this Buck from moving! It is somewhat ironic that this Christmas I told my Wife that I just wanted to give and not receive presents. But a day later I ended up with one Big & Beautiful Buck, a present any hunter could appreciate, 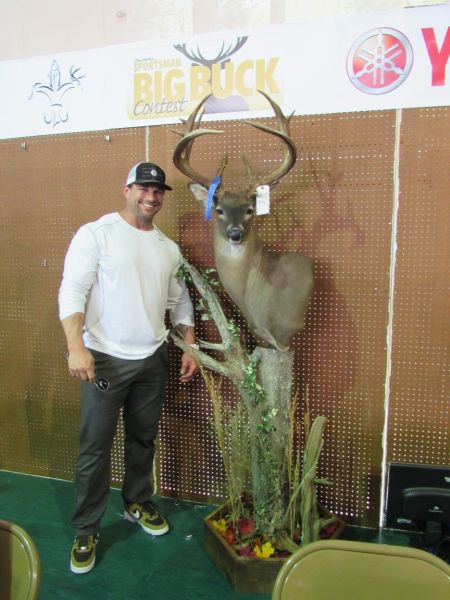 I have been going to the LA Sportsman Show for many years, but I had the chance to help out at QDMA / Big Buck Contest booth this past Saturday!

The amount of venders in the outdoor industry that were there was just crazy..... And the people that came through just looking was pretty cool to see.

I love Louisiana, we really do live in Sportsman Paradise.

My addiction is Deer Hunting, it's in my DNA ~ Crazy motivated year round. So to see the bucks that were brought in 1st hand was a rush!

I believe we checked-in over 100 bucks from the region, a few mid-west too. But the majority were from LA/MS, and there were some unbelievable bucks! These being private & public land both. So, Ya we have big deer in the South....

All of these racks were tapped by B&C score officials / La Wildlife & Fisheries Dept.

These guys put many hours into measuring all those racks too! 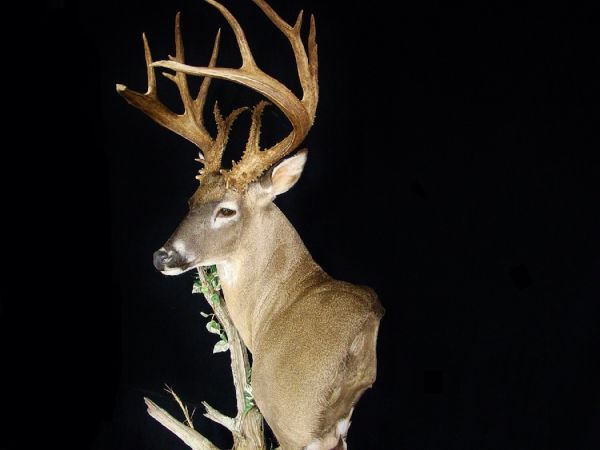 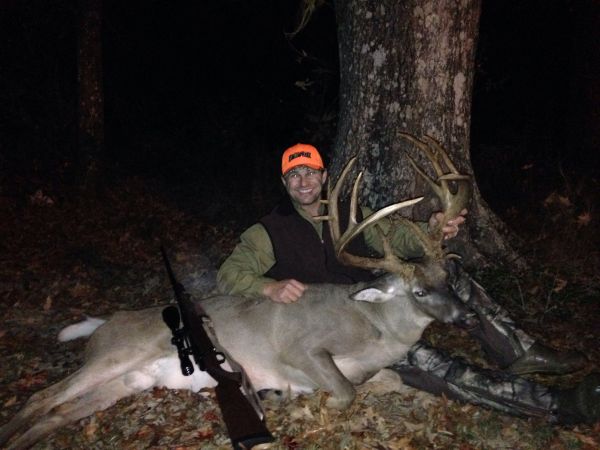 On Tuesday evening Dec. 2nd at 4:35 PM, I could not believe my eyes were seeing what was walking through the pines on my Mississippi Hunting Lease!

I been hunting like most of you guys, a long time! I will never brag about killing any deer, deer hunting will humble you quick & hard.... Right Place at Right Time, I'm 44 and love to hunt deer... Not monster deer, just deer!

I know he is a buck of a lifetime or two, I want to share him in a positive way. And I truly wish that all my friends who hunt get to feel how I'm feeling right now. Although we hunt for more reasons than to kill trophies. I'm very humbled, blessed, & so grateful..... 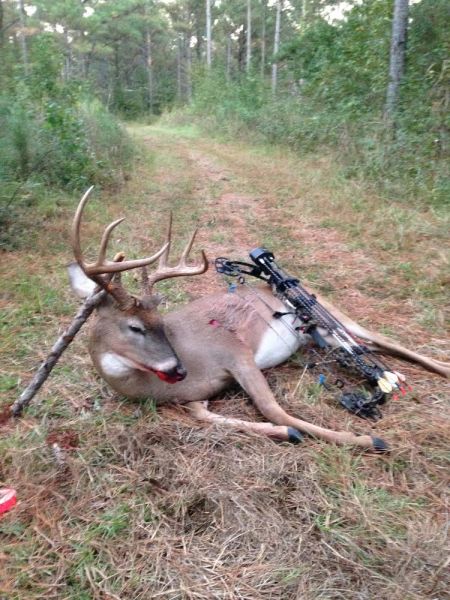 Hunted the whole 2nd weekend of Oct. and lost 10 lbs from sweating so much just sitting on stand! Got a short glimpse of this buck on Oct, 11th but no shot.

Oct. 15 weather finally cooled down some, so decided to make a quick trip just for the evening sit! Paid off, nice Mississippi Bow Buck..... 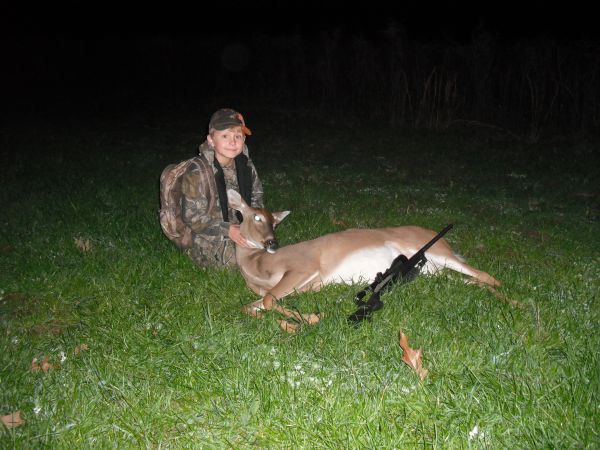 My 6 year old buddy got his first taste of Adrenaline!!! After the shot he kept saying 'Papa, I'm Freezing' LOL. I was very impress with the way he handled the situation, looks like he is got things all under control. Took me much longer than 6 years to be cool under pressure with a gun!!! 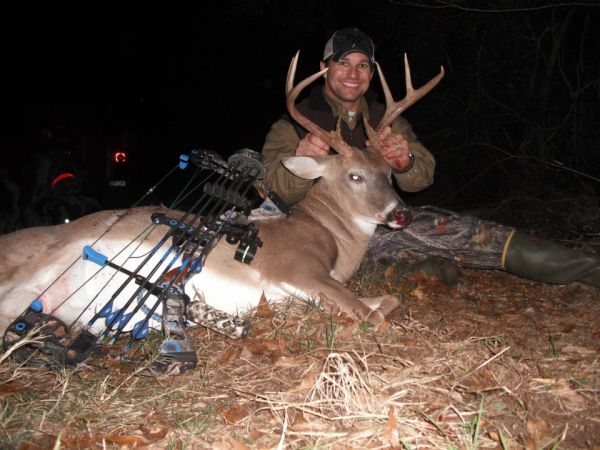 Weather finally cooled down, so I grabbed the Switch Back XT and climbed up a tree on the edge of a food plot. After sitting for several hours with no sign of a deer, I heard that wonderful sound of leaves cracking, Two Rack Deer!!!! Itâs was a great evening to be in the woods, Iâll never forget itâ¦â¦.. 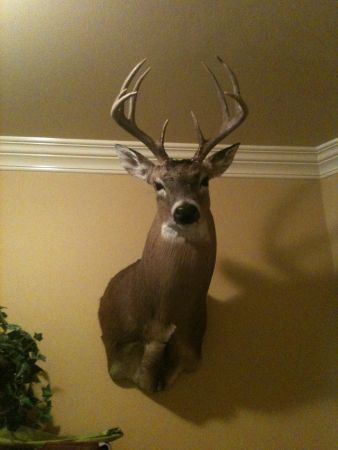 Thanks to my taxidermists, Magoo ~ My home is now complete!!! lol 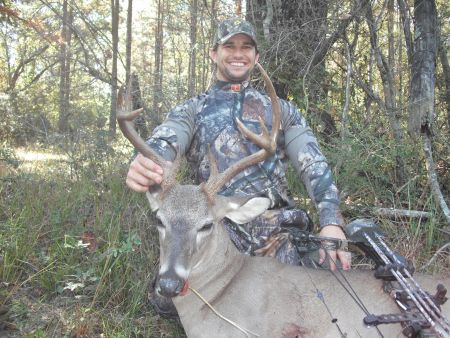 Hard to believe this deer season is almost over!!
But it has been a good one, been lucky this year....

Video of a few Bucks from my trip to the Heart of Texas.... 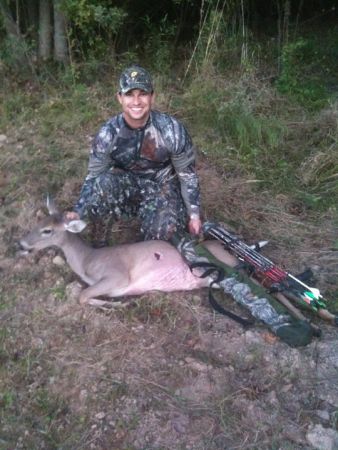 Ground Blind Shot, little far back but 2 Blade Rage did it's thing.... 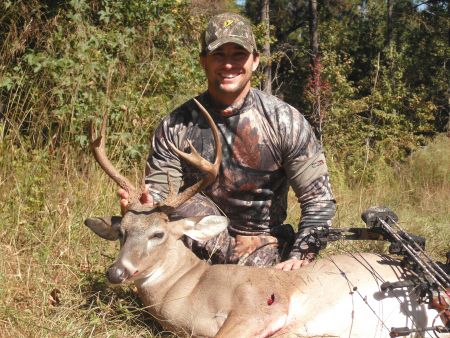 This was a morning I will never forget, I have been bow hunting for a long time. Over the years there have many of lows and dissatisfied endings, but this morning was a great morning.

I hunted yesterday evening only to see a few does and a small 4pt.I knew that we wouldn't get very many morning in the low 40's in Louisiana during bow season, so back on stand this morning. Thanks to a very loving wife!!! It was not until 8:15 did I see the first deer, little did I know it would end up being my best Buck to Date, Gun or Bow.

I hope that everyone who loves to deer hunt as much as I do, get's to feel the way I felt this morning after seeing My Buck Go Down 60 yards in front of me!!!! 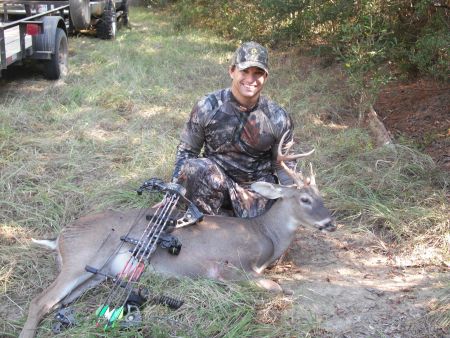 Having a fun season so far, shooting deer and hanging out with good friends!!! The weather this past weekend was a very nice treatâ¦â¦ 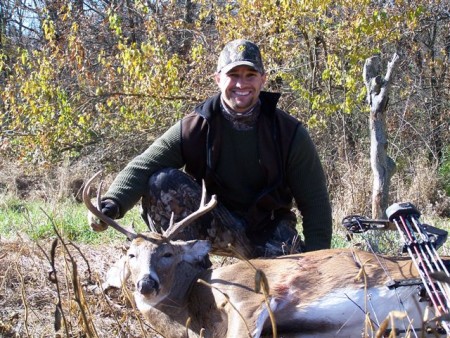 Last weekâs hunting trip to the Great State of Illinois. We didnât see the monster we went looking for, but we did manage to fill our buck tags. I shot this busted up 7 point âBroken Main Beamâ 200lbs. He came straight to my decoy, all fluffed up and looking to fightâ¦â¦. Put the Maximum Carbon Express tipped with a Rage 2 Blade head right through the lungs. Luv going to the Mid-West and hunt them big corn feed Bruisers.

Now Iâm happy to be home and ready to carry my Browning A-Bolt 270 in the woods. 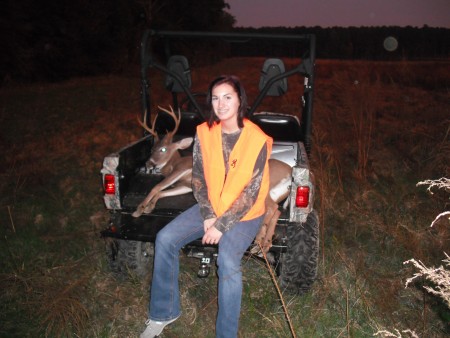 This evening my daughter harvest her first Buck. It was a very nice 8 pointer at 173 yards and she made a "Perfect" shot with a Browning 270. This was only her second deer ever taken. Arielle has been tagging alone on hunting trips from the time she was 4 years old. She is a great hunter and a wonderful daughter. 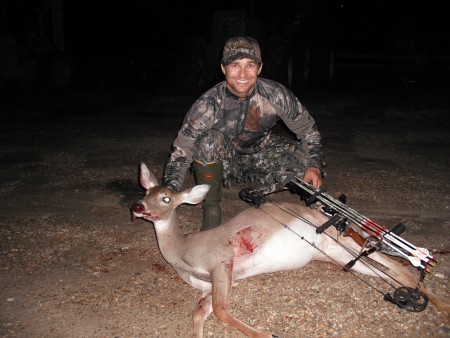 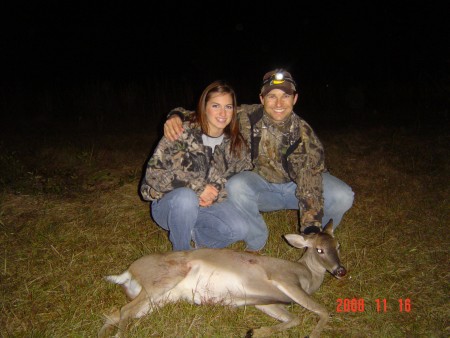 I canât wait until that first slight north wind starts to blow and I wake up one morning and the humidity is just mild out. Thatâs when the fever kicks in, and all I want to do is be in the woods looking for a place to hang a stand. I was just sitting here reminiscing about this past hunting season and wondering how the upcoming season will turn out.

God willing my kids will enjoy the outdoors as much as I do. My 15 year old daughter took her first deer, I think she is hooked. And my little buddy is only 4, but I donât think Iâm going to have a problem dragging him into the woods.

Got your husband beat this year young Lady!!!! :)

And I'm pretty sure he will be a much better outdoors man than me.......

That's him - he is big! The awe factor is back again after seeing the horns back on his head!

Thanks Tuffhuntn / I got him in Claiborne County, MS back in Dec.

Totally Agree with you Brother!

December 10, 2014 at 4:01pm
A comment titled: Contacts in response to a report titled: Buck of a Lifetime

Just sent you my contacts via email

December 09, 2014 at 7:25pm
A comment titled: Brent Young in response to a report titled: Buck of a Lifetime

Thanks, Your Brother in Law is a real good guy....
Yes, we workout together & talk about hunting the whole time!

December 07, 2014 at 1:57pm
A comment titled: Unofficial in response to a report titled: Buck of a Lifetime

- This deer needs more recognition than the hunter. He truly is a Rare & Magnificent Animal! 100% fare chase ~ not living in a high fence, just a Beautiful Deer.....

October 13, 2011 at 2:01pm
A comment titled: dhenson in response to a report titled: Texas Bowhunt

I didn't shoot a deer. I had one shooter that I would have loved to taken, but he was chasing does and never gave me a good bow shot!!! I had a great time, will go again.... Is your Dad, Mr. Buddy?

Ya, this is all new to me as well.... I used the Dazzel Edit program, it allows you to cut clips fron the video and the slow them down. But like you I don't know if I can do it again!!! LOL

I luv to hunt, not much else to tell.