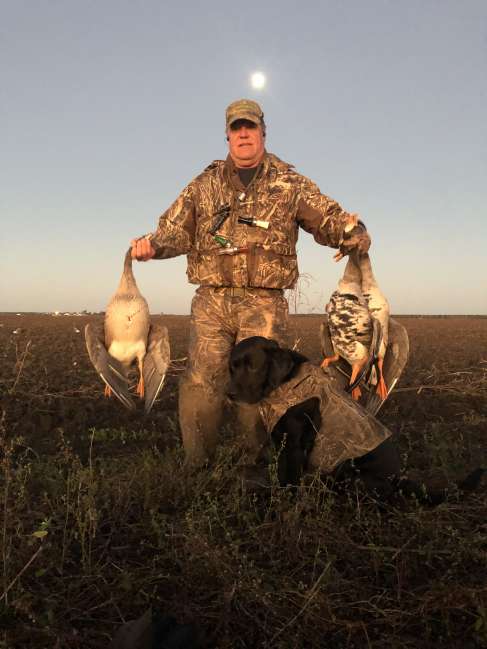 First two splits of 2020 Arkansas duck season have been the worst Iâve seen in 10 years of hunting in southeast Arkansas near Lake Village. Thankfully, geese have been plentiful and many limits of speckled belly geese have been got. Arkansas Game and Fish recently released an update on duck numbers in Arkansas so far this season Duck numbers are down 50%, including mallards. Everyone Iâve talked to from Stuttgart to Eudora have all said the same thing, âwhere are the ducks?â Bring on the Polar Vortex cold fronts to push those ducks down! 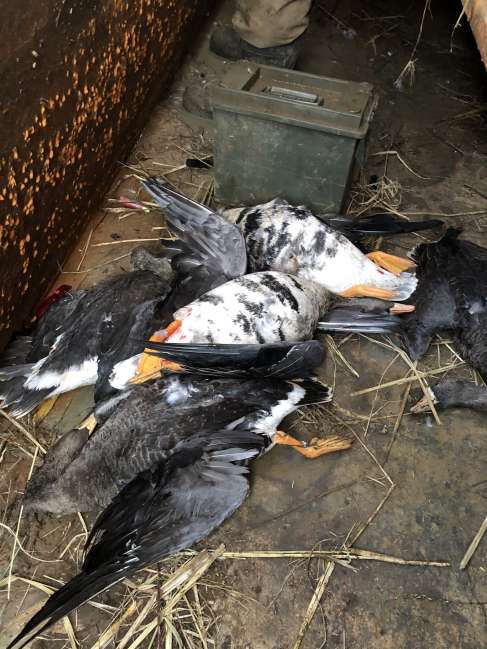 Easy limits on Specs in southeast Arkansas past few days at my lease near Lake Village. Arkansas went back to a limit of 2 per hunter on Speckled Belly geese this season, but added more days to the early goose season, which opened here on Saturday.My group of 3 had our 6 bird limit before 7 am each day. Thousands of Specs and Snows here on our rice and soy bean farm already! 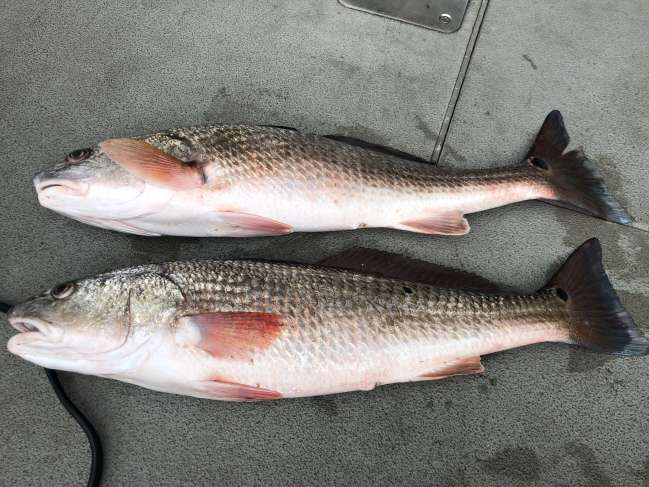 Made a quick trip out of Bayou Lacombe this morning before storm surge moves in to try to catch some specs and reds. Caught couple of nice reds early, then wind starting blowing in from SE. No trout this morning? Shout out to the Mandevillian who brought me out here this summer and showed me these grass beds on Northshore that have been holding Reds for a while now. 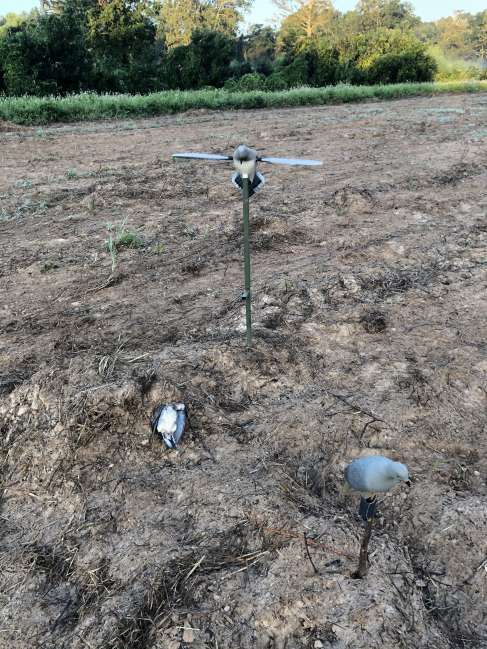 Shot a mess of doves on Labor Day morning at my camp in Arkansas. Wrapped in bacon and grilled just right, made a fine supper. Also, saw several flights of teal, one group of 20 that buzzed right overhead!

Hopped on the Bluewave at 6 am today with Captain Jared with Miller Time Charters with poor expectations from not so promising weather report for chasing trout. Started out chasing reds on the inside with forecasted 15-20 mph west winds. After wife caught nice keeper red right away at first stop, things were shaping up for a nice day catching reds. Surprisingly, we were greeted with flat seas and calm wind, and after a few more cast, Captain made the call to head on out and chase some trout! After a short ride on glass like conditions with clouds and light rain, it didnât take long to start rolling the trout over side of boat on double rigged Matrix Shad in whatever color you threw out there! And to top it all off, on the way in we stopped and caught 3 awesome slot Drum that put up an awesome fight! Thank you Captain Jared for putting us an awesome 4th of July firework show!! 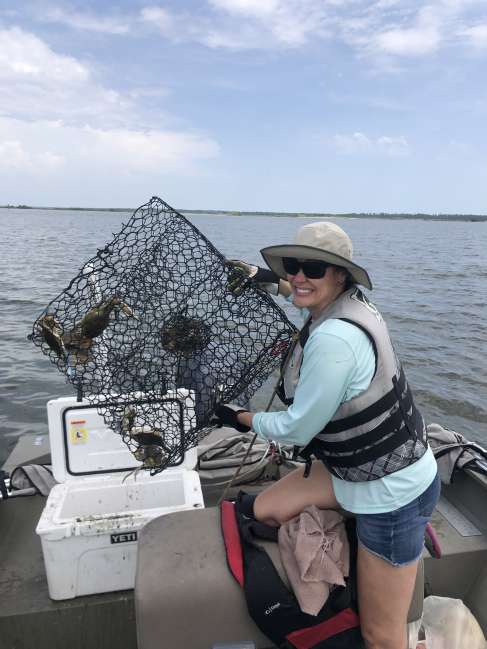 Wifey and I ran my half dozen crab traps we threw out a few days ago in Lake Pontchartrain today and got a couple dozen nice crabs to boil tonight before we head down to fish with Captain Travis Miller in the morning. Looking forward to our 4th of July fishing trip! Hope the weather holds out. Happy 4th of July to everyone. 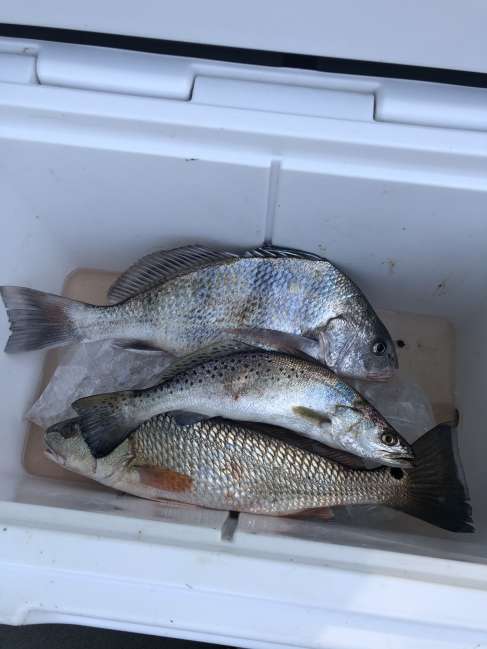 Wife and I headed out to Trestles in Slidell this morning to break the Coronavirus isolation routine. Got right on some Reds early, had one 30â Red break my wifeâs line right at boat, then another one right after that. She eventually boated a nice 17â drum and an 18â Red, all on V&G Terror Tail by Deadly Dudley in Blue Chartreuse. Water was calm and a little dirty with some algae bloom starting to show up at Trestles. Mississippi River water from Bonet Carrie Spillway quickly muddying up Lake Pontchartrain.ð Later in the morning the wind picked up and tide starting moving and I got one nice 17â trout in cooler and missed several nice ones that got off before I could net them. Once wind started pushing up some white caps after lunch we headed in. Beautiful day on the Lake today!

Thanks Wiz. Getting harder each year to justify the expense of hunting up there in Arkansas (4.5 hour drive from my home in Abita Springs) and maintaining a camp there. Most years have been productive, but years like this one make you question your sanity. However, the excitement of a dozen greenheads working into your decoy spread in flooded rice fields is a sight you rarely get to see here. Got to love it!

Glad to see you guys continuing your success from teal season. It was tough to read your post from last season when futility was the norm on most hunts. Hope to get the Nuck and Futz duo back up to my place in Arkansas soon. If the positive results continue for you guys, I may have to come hunt with the Duo! Been slow up here in Arkansas so far in my area for opening week. Happy Thanksgiving to all the Louisiana Sportsmen and women out there!

Dang Wiz, another impressive haul! Had to been fun busting em up with the top water, even a Sheephead!

Sounds like you and the wifey had a great trip. Were the leaves changing colors up there in northern Arkansas yet? Me and a neighbor headed to Bayou Lacombe in the morning before storm and try to find some specs and reds on Northshore of Lake. May evacuate up to my Quack Shack near Lake Village, Arkansas on Thursday to do some bow hunting on my deer/duck lease there and bass fishing on Lake Chicot. Better than sitting around here with no power. Got report that the speckled belly geese have arrived up there on the freshly cut rice fields. Early goose season just couple weeks away!

Nice haul there Wiz. Looks like you been on a nice trout run last couple of trips. Me and a neighbor headed to Bayou Lacombe in the morning to hopefully slip out into Lake before storm to chase some trout and reds on the grass beds along Northshore.

Great pics! Looks like you guys had an awesome season ending lotto hunt! Thanks for sharing story and season update.

Congratulations guys on a nice teal season, impressed with your efforts on north shore public land. I knew things must have been going well since your lack of reports were obviously much fewer than last season, when you were reporting depressing results on a daily basis. Looks like teal season in Louisiana was a big success all over, reports of great hunts have been pouring in! Hope the big duck season is just as good here in our great State of Louisiana. I look forward to having the Nuck and Futz duo back up to my place in Lake Village, Arkansas for another duck hunt this year! Great job guys, thanks for sharing update and pics.

Nice! Lots of hunters had best teal season in a long time from reports Iâve been getting. Wish I could have mad a teal hunt this year. Hope big duck season is just as good...

bamaduck thatâs an awesome season, congrats! What area did you hunt?

Awesome day Wiz! Maybe those tournament boats that were buzzing by should take note of âWake Bait Wizardâ, then they might take a check home??

Nice haul there Wiz! Had to been a blast smashing those Reds on those wake baits. Always impressed with your posts, especially how you throw most of them back and only keep a few for a great meal. You da man Wiz!

Good luck with your teal hunting Mande! Glad to hear you got the boat motor back together. Sounds like the wifey gave you a nice assist! Good job on landing couple of reds on the grass beds in the Lake. I may try to get the boat out thus weekend if weather allows. We got to get The Wiz to take us to his honey hole and show us how he does it!

Wiz, looks like you had an awesome trip smashing those reds on dat wake bait! Bet that was a blast!

Thanks Wiz, fun hunt. That Mojo dove decoy was the ticket. Since I was hunting solo, that spinner brought the birds in close!

Bayou Ken, those are two nice shooters anyone would be proud of with bow and arrow. Hopefully, they will still be in velvet when October 1st rolls around. Iâve bow hunted in Mississippi for the past 30 years and the anticipation of opening day of bow season never fades for me. Letting those bucks walk as 2 and 3 year olds really pays off. I hunt in Copiah county and have couple of 150 and 160 inch deer on the wall from bow seasons past! Thanks for sharing pics. Good luck in nailing those bucks on your hit list.

Iâm ready to come over anytime and fish with you in your honey hole! Me and Mande having hard time getting a fish in the box lately, need to spend a day on the water with the Wizard!

Nice Reds there Wiz. Thanks for teal report, us duck hunters always hoping for better days ahead! Hate you missed that flounder, you right, stuffed with crabmeat and shrimp makes a fine supper!

I saw group of 25-30 teal here at my duck camp near Lake Village, Arkansas yesterday afternoon. Circled my camp then landed in catfish pond across the street. Cool front with 20 mph north winds blew in after lunch and brought down teal with it.

Mande, got to give you some double thumbs upðð for your TFuncky efforts past two mornings out your pirouge! Some nice bass in the box past two days, and a few sac a lait to top it off! I know how hard it is to catch fish on that river and to accomplish your catch without live bait is impressive. Fish on!!

Nice job Mande. Wife and I went out of Bayou Lacombe on Friday evening to check crab traps. I noticed at Main Street launch that trim sounded weak lowering the Yamaha 115 4 stroke into position. Not long after getting up on plane there was no response when I hit trim tab to trim motor. I knew then my trim was out and motor stuck in down position. Once back at launch, with ice chest full of fat crabs, I was able to tap on trim motor and it had one last gasp and I was able to get er up! Luckily it was only brushes in trim motor Giving me my problem and the Alumacraft 2072 is ready to ride again! Crab traps baited up and ready to run again!

GB3 has not filled this section yet.