First Buck With A Bow

First Buck With A Bow 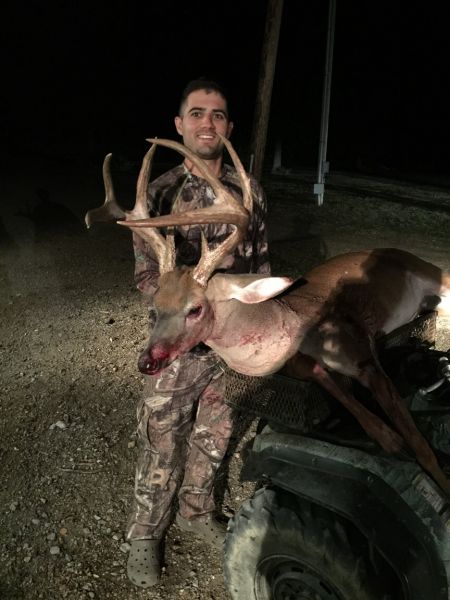 When I got on the stand Saturday October 3, I was expecting to see deer with the cooler weather but not a shooter buck. The buck came out and started eating locus beans directly under my stand. He wasn't very wide but he made up for it in beam length and mass. He weighed in at a hefty 225.8lbs.

With talk of future shorter seasons are LDWF decisions for the good or the bad. In my opinion the entire system is flawed. There is nothing asking hunters what they see rather than what they kill. I did not kill one single deer in my home parish last year but saw more than I have ever seen. The property that I hunt close to home is pretty much under a doe day system which usually means I can only kill does whenever they have young fawns or during the rut. This alone has led to me seeing about 10 does to every buck. The reporting system is also a joke. Calling it in is not an easy task especially if you are in the middle of nowhere with hardly any cell phone reception. The mail in surveys are also gonna be off because who in their right mind is going to tell on themselves for not reporting a harvest in the first place. Numbers could also be down because people are practicing QDM. Which means they are killing less deer while populations are going up because they are trying to increase the age structure of their herd. 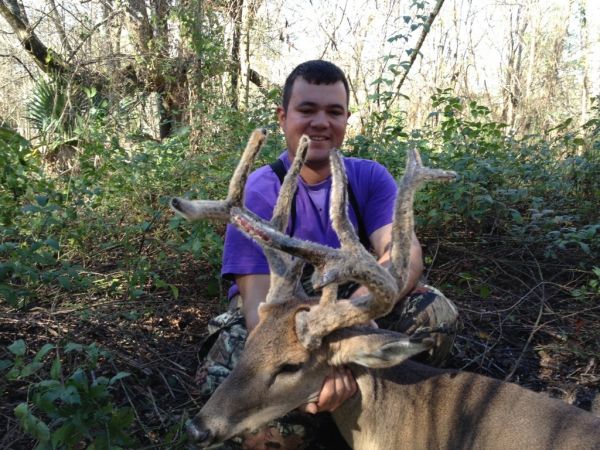 My brother killed this rare prize on December 22. We have been having him on camera for 2 years now and he has never lost his rack. When he shot the buck he thought it was a big hard horned buck, but when we tracked down an hour later with a dog he realized that he shot 'Fuzzy' which is what we named him 2 years ago. He weighed 220lbs, had 6 3/4 inch bases, 23 inch beams, and a 13 inch inside spread. He is a main frame 8 with 4 abnormal points.

I just recently purchased my first kayak. I live in the Gonzales area and was wondering where are some good places to fish from a kayak. I go fishing in Fourchon quite often with one of my friends, but I have never been kayak fishing down there. Can anyone direct me to some places to fish out of a kayak, or a website that will do so.

I'm glad to see other sportsman practicing conservation like this. My friend's family has a place in Tensas that they practice the same efforts on. It is very tough at first to pass deer like this, but after a few years the efforts really start to pay off. The deer that are passed on the property now would be trophies at most other places. I applaud people that have the patience to pass on deer and let the herd get healthier. I would also encourage anyone that wants to make their hunting better to join QDMA. The Quality Deer Management Association provides people with knowledge that they need to make their hunting property the best that it can be.

My brother killed it, near Baton Rouge

Thank y'all. I would be proud of the deer if I took it with a rifle, but it makes it extra special beeing my first bow buck.

I personally make sure that all of my kills get reported. However,I have witnessed quite a few people get frustrated with the call in system and hang up. There were even times last year when the system was completely down.

My neighbor was allowed to buy 2 for a pond about the same size. They cleaned it up in about half a year and now it stays pretty grass free.

If the pond does not have any routes of escape wildlife and fisheries will issue a permit to buy carp to put in there. They will keep it cleared out until they die.

I strongly support baiting. Hunters put so much time and resources into managing their herd, why should they not be allowed to harvest them easier? Hunters that plant food plots and 'bait' deer have drastically increased the vitality of deer in both health and population size. Deer populations are greater now than pre Columbus. States with these ignorant bans actually hurt the deer, not only are they overpopulated but they are ravished with disease. I know my comments about increasing population sounds contradictory but that is why it's called deer management. You have to be able to thin the herd when it gets too big, which baiting helps you do.

Since when did rifle season start? Most of the state doesn't start till the 16th.

Fish are just like any other animal on earth, they adapt to their environment. Every time a small fish is released its genes are passed on. Eventually, with people only keeping large fish, the small fish start to outnumber the large fish dramatically. This means the smaller gene is more dominant throughout the population. Hunting clubs clubs basically do the same thing unintentionally when they implement a point restriction on what to shoot. The first couple of years look great but then it goes way down hill. Small fish can also overpopulate making it hard for every fish to get larger because there simply isn't enough food.

P.S. My 86 year old grandpa said he used to catch hundreds of bass a day that were really healthy before they implemented the size and creel limit. He also said there were just as many fishermen back then because people depended on the fish for food.

My go to spinnerbait for both of these areas is a white and chartreuse 3/8oz humdinger. Maybe a 1/2oz if I need to get it down quicker for the current or deeper water. I will also use a purple humdinger if the water is too clear for the bright colors.

My brother and his friend fish The children's miracle network tournament every year. They love it because you can fish any public navigable waterway. The payout is usually pretty good too. It is held in St. James Louisiana in mid march. Here is the link for more info: http://ololchildrens.org/body.cfm?id=129&action=detail&ref=2

There is also the fishing for Tucker tournament which has very similar rules. It is usually held out of Gonzales it is on February 2, 2013. The website for it is: http://fishingfortucker.com/#2749

Thank you. Even though we had tons of pictures of him we didn't know he was nearly that big because they were all at night with nothing around to compare the rack to because the pictures were in the wide open.

He had not lost his lost his testicles but they were very small, about the size of kidney beans.

I have seen several places like this in Louisiana. Lake Concordia, Lake St. John, Lake Verrette, the Atchafalaya Basin, and tons of private lakes. The first two they are trying to fix the problem by restocking baitfish and no size limits. The second two are utmost evidence of catch and release damage. If you ask any old timer about fishing in either of the two they will tell you without you that neither of the two are like they used to be before the 14inch minimum. There are huge debates every year within wildlife and fisheries of whether to not have a minimum or move to slot limits because there are tons of 12-13 inch fish swimming around with only about 10% of the fish being over 4lbs. I personally keep smaller fish and let the big ones go unless I'm fishing a tournament. I fish at least 200 days a year and you can tell the difference between good and bad management.

Catch and release can actually be harmful to the fisherie. No matter how large or small fish need to be taken out. A 12 inch bass will spawn. This means that there are constantly more and more mouths to feed with less and less food around. It is better to take out smaller fish, because the larger fish have good genetics that make them healthier, but it is not necessary because smaller fish normally get the same genes. If you ever fish an overpopulated lake you will discover how easy it is to catch fish, but more importantly how skinny they are. I've personally caught a 20 inch bass that weighed 1.78lbs, with many 12 inch bass the same day weighing under a pound. If you want to learn more about proper fish managemnt just talk to a wildlife and fisheries agent most of them know their stuff.

My friends dad has owned a kenner, skeeter, champion, and a pathfinder. He says the only boat he will ever buy again is a pathfinder. He has a 22ft tournament edition and it is an amazing boat. It takes 2 to 3s without getting you wet. Most of them come with factory trim tabs to get on plane in shallow water, it has plenty of storage, it's all composite, and it is the easiest boat I have ever cleaned. He has a 250 yamaha with a electric jackplate and we have gotten to 64 on the gps with the right prop. They are kinda pricy, but you can find them used with a ton of features for a reasonable price. He paid $38,000 for his used, but it has everything including radar, detachable redfish platforms, stereo, dual power poles, electric jackplate, and a 4 bank onboard battery charger.

November 28, 2011 at 4:41pm
A comment titled: Ultravibe Speed Craw in response to a report titled: best all around bait?

I agree. The speed craw can be drug on the bottom, jigged, swam like a spinnerbait, or swam on top. You don't even have to adjust the bait, all you have to do is reel it in differently.

July 22, 2011 at 9:25pm
A comment titled: Freshwater spots in response to a report titled: New to kayaking

I do alot of bass fishing in Blind River during the week days whenever there is not as much boat traffic. I just launch right off of I-10 coming from baton rouge. You just get over on the shoulder and take that down right before you cross the bridge that goes over blind river. P.S. you will need a saltwater liscense for this area.

pookie2 has not filled this section yet.