First Kill of the Year

1977 Pursuit in response to a report titled:  First Kill of the Year

First Kill of the Year 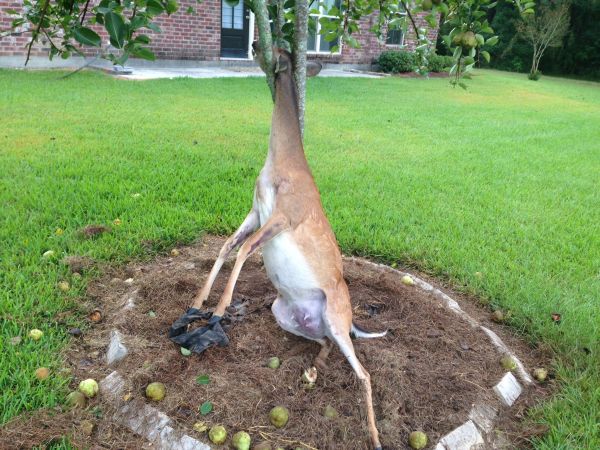 DO NOT LAUNCH AT SERINGE'S!

I had the worst experience at SERINGE's Marina. Saturday, some buddies and I went to Delacroix to get in on the fishing action. The launch at Seringe's had several boats in line, so we headed to the Sweetwater Marina launch. Unfortunately, Sweetwater was out of live shrimp, so we boated over to Seringe's to see if they had live shrimp. I asked the woman at Seringe's if she had any live shrimp and how much. She said yes and her next response shocked me. 'How much are they charging everywhere else?', she questioned me. I informed her that I haven't bought live shrimp in years, and wouldn't know. She then questioned me if I launched at her launch, in which I responded, 'no ma'am, we launched at the other marina.' She then informed me that since I didn't launch my boat there, I couldn't purchase her shrimp. I even offered to pay for the boat launch and she refused and told me to 'go fishing' and 'get on out'. She was extremely rude and unprofessional, and I would advise not to use her services. She will never get my business and I will advise that nobody launches at her place. The people at Sweetwater Marina were nicer, unfortunately, they were out of bait.

I'm bringing a buddy fishing this Fri. and Sat. to Catfish Lake area. I do all my fishing in this area, but really have never been out of the main bayous, mostly due to posted and unposted waters. Whenever I go, it is usually hit or miss. I read reports of fishermen catching around oyster beds, but I have never located any. If anyone can provide detailed information in locating these reefs, or any potential hotspots this time of year, I would be gratefully appreciative and will post my endeavors as soon as I return...hopefully with a full icechest. The names of landmarks I'm familliar with are only the ones listed on mapquest. How is the sulphur mine this time of year? Thanks to everyone that reads and posts their reports so biannual anglers such as myself and all others get some advantage on the water. Thanks and God bless.

What is the word on Elmer's Island?

She wasn't nursing, I believe she was just bloated from being there all night. I pulled her teats and nothing came out.

I think the icing on the cake would be to use her launch to get the boat out of the water after fishing!

Unfortunately, Jack was not at the launch. Some young female was tending the place and didn't know when the next batch of bait would be in. We arrived late due to a bad wreck on I-10 that kept us in traffic for over an hour.

Yes, I am new to Delacroix. I have heard great things about the fishing down there. This was my second time to fish Delacroix and probably my last. The woman could at least have the decency to have a sign that states, 'No Launch, No Bait.' I would have, at the least, respected that.

But come on, what does it matter! I want to do business in a place of business. With that reasoning, am I suppose to buy gas at a gas station if all I want is a soda? I even offered to pay for the launch. The fact is that woman is just plain NUTS!!

That is exactly what we said, instead of Seinfeld's 'Soup Nazi', we also coined her the 'Shrimp Nazi'!

My wife and I enjoy watching Kevin Ford as the host, even though he is not really a fisherman, but more of a sports host. I don't believe she would watch it if there was another host. However, we would like to see newer episodes instead of repeats, but nonetheless, we enjoy it together. This goes to show that anybody can go out and charter a boat/guide and have a great time, whether you are a novice or a seasoned angler. In my opinion, I would much rather watch the guide/host catch a few large specs than watch them catch a lot of schoolies. I think the most beneficial parts are the tips that the guide offers, and then translated into lamen terms by Kevin Ford. You have to realize that people who watch fishing are obviously not fishing often. LA Sportsman TV is also filmed all over south LA from Cameron Parish to Plaquemines Parish, which encourages viewers to get off the beaten path and explore new fishing grounds. The show could venture into other areas of LA to include freshwater fishing as well. The most important reason I enjoy the show is due to the fact that it is all about fishing; no hunting. I have nothing against hunting, in fact I sit on a stand every now and again, but watching a hunting show can put me to sleep faster than Thanksgiving dinner. Thank you LA Sportsman TV and Host Kevin Ford, and keep filming new episodes. We enjoy watching every weekend.

Sorry to hear about your client cancelling on you, but it's great to hear that the fish are still out there.

If you ever need help on a scouting trip, let me know and I will more than gladly offer my assistance for free. This also includes filleting all the fish that are kept and 1/2 the cost of fuel. Have a great day and God Bless Louisiana's fisheries.

live4fish has not filled this section yet.