If money was not a barrier, what would be your ideal baitcasting reel for redfishing? Waiting on the winds to die down to get back out on the water and having too much time to think about things. I enjoy sight fishing for reds and like to target reds in the 20' to 30+' range (catch, tag and release on the ones over 25'). I prefer using a baitcaster and would like something that is not too heavy but has good drag capability. I currently use a Calcutta 400 but that can get my wrist sore after a full day but it is hard to argue with that smooth drag. I am sure there are some reels that I have not even considered that might be just the ticket so I wanted to get some input before making a decision.

I need to have some work done on a stainless steel prop. Are there any good places to bring in near the Slidell area? 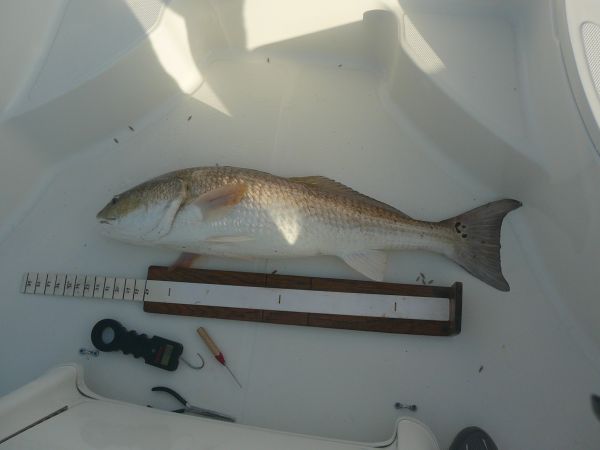 Had a great day on the water sight fishing, catching, tagging and releasing bull reds in lake Borgne. I was able to catch, tag and release 9 nice reds ranging from 13.5 lbs to 24 lbs. One had a smiley face mark on his tail. Was able to catch 3 in the 18 inch range for the ice chest. Had 5 other bulls hooked up but lost due to a dull hook. I also sighted over 30 others I didn't get a hook in. The reds quit about lunch time when the falling tide slowed and the wind changed to more out of the E/NE. All reds were caught on a purple queen cocahoe with chartreuse tail, no cork. It was a blast watching the reds hit the lure and run like hell. You can see a number of sea lice on the deck from this fish. All the big fish were loaded with these things. Based on the number they left of the floor of the boat, they went back with a lot less than they came in with. 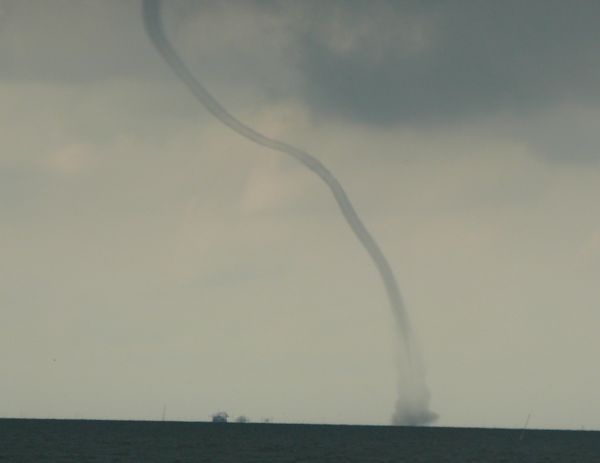 The weather on Friday was not exactly what was predicted. We had to dodge a number of small rain storms. We were able to get 15 keeper trout, about 50 throw backs and 8 reds. 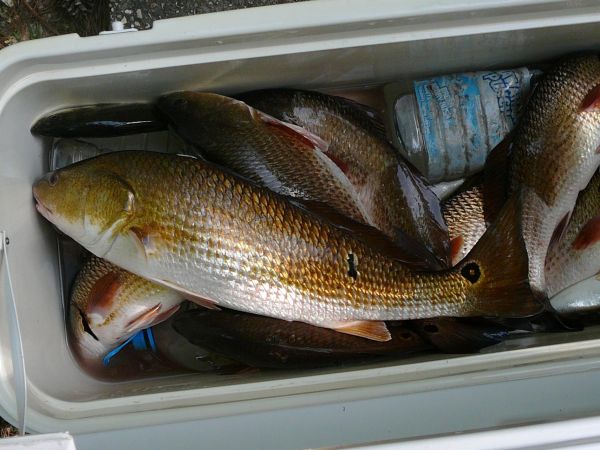 It sure was a hot one on Saturday. Didn't expect to find any trout and assumed we would be stalking reds all day. But we did find a few good trout at daybreak and some schoolies later in the morning. We shifted to sight fishing reds just before noon. We got out limit with one uniquely marked redfish. He had what looked like a '0' on one side and a '10' on the other. You have to use your imagination a little but it looked neat to me.

Capt Paul, thanks for your reply on my previous question. Since I will not be mounting the unit for a couple of months, I would like to play with the unit to learn the features and set some things up in advance. I assume if I can locate a 12v converter that will provide about an 1 amp of 12v power I can connect the hot (red) and ground (black) wires to the unit's power cable. I just want to make sure that will not damage anything. It sounded like that is how you do it in your classes. Also, can I hook up the transducer as well? Not sure if operating the transducer when it is not installed or in the water can cause any damage. Thanks for your help and advice.

Captain Paul, I received a Lowrance HDS 8 Gen 2 for Christmas (from my wife no less). I have not had time to install it but have been reading up on how to work it. One thing I always did with my old Garmin GPS III unit was for each fishing trip, I tracked how long of a trip I made (miles and time) as well as my maximum speed. When looking at the features of the Lowrance, I didn't see anything that showed that kind of info. Maybe I wasn't looking at the right screen. Although the Garmin is old and very small, it gave me some key data such as distance and time to the selected waypoint and the trip info mentioned earlier. Will the HDS give me the same info?

Guys, thanks for the input. I do have a couple of Calcutta 250s but with the bigger reds I just can't seem to get enough drag to make it a shorter fight. I like catching and tagging the bulls when they get thick around August in the marsh but I hate to have a prolonged fight when the water is that hot. I still have my first baitcaster which was a Ambassadeur 5000 from the late 70s. A friend of mine swears by Lews. I have never used one. I will have to give it a look. I also had someone mention to me that one of the Quantum PT reels was supposed to be really good and I think he said it had 25lbs of drag. Mandevilian I noticed from your posts that you fish many of the same areas that I fish in the marsh.

Coaster81 has not filled this section yet.