Just bought a Lowrance HDS 5. Would like to get a better map than the one embedded in the unit. I'll be using this finder for mainly fresh water use in Louisiana. What type of GPS SD card have you been happy with. Thanks in advance for any tips.

What's the best duck ID booklet?? I've seen someone with a LeMaster booklet and it looked OK, is this the better one or do they have other's that are better??? Thanks 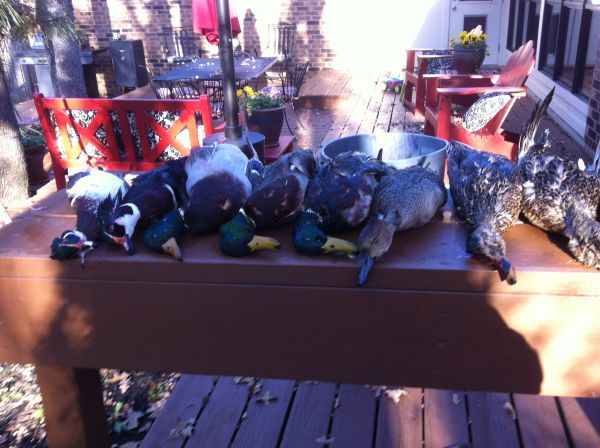 Had to sell my mobile home in Grand Chenier due to Cameron parish/FEMA requiring elevation of existing mobile homes. Looking at travel trailers and need help. I have a GMC 1/2 ton and can tow 7500 lbs max. Looked at Everlite, KZ, Premier Bullet, etc. What's really a good name brand trailer that will hold up well? Willing to pay more for quality but it's hard to compare apples to apples as I'm a novice. Any opinions will be appreciated.

Slow hunting in the fog this am in GC. Had a few bunches of teal early but with the fog, could not seem to keep my gun barrel ahead of them. So we had a few misses on teal. Stayed in the blind until 9:30 and ended up with a lonely female grey. Anyone else in the area do OK??

Any Grand Chenier reports would be appreciated. My camp is not far from the Game Warden's complex. Hoping everyone is well with this storm.

Fished the bay yesterday around the Hammock/Dry Reef/Blue point without much luck. Fished from 11a-4p. Caught a red fish, one flounder, and many croakers. Never made it to the pass. There seemed to be a thunderstorm right in the pass most of the time as well as a water spout sighted at one point in time. Oh well maybe next time we'll leave earlier and avoid some of the pm storms.

Any info and or pictures of a 120 plus pound Cubera Snapper caught recently. Heard a little about it but can't seem to find any definitive ingo. Thanks in advance

Anyone have photos or recent info about the Grand Chenier area? Thanks in advance.

Fished Saline/Larto complex today without much luck. Fished shallow/mid-depth/deep. Fished tube jigs/hair jigs/shiners/beetle spins. No fish to be found in the shallows (2-4').
Most fish found deep {14-20'). Spider pole boats seemed to be doing the best but not my favorite type fishing. Shoot me an e-mail if you had better luck than I did. Tight lines to all.

Agree with other comments I'd like to add: Was the other boat up current and you down current. Was he fishing mid depth, bottom, was he chumming, were you using heavier line than him etc. All kinds of factors involved I'm afraid

Do a query on the internet to see what some people use to lock batteries onto their travel trailers. One of these may suit your needs

I personally like Muck Arctic boots. Wear a thick pair of good Cabela's wool socks with that and my feet feel good sitting in a duck blind form 6-930 am. Don't do a lot of walking like you would to deer hunt so I can't vouch for them for that aspect

Went about 5-6 years ago on a White Lake marsh hunt. Truly a great experience. Prices have gone up per hunt since then but I doubt the extra money goes to the guide. That being said, we were two hunters and each gave the guide a $25.00 tip. He was happy what we gave him but they may expect more nowadays. Call or e-mail the contact person for White Lake management and ask him what a fair tip would be if it is indeed required.

I like to use a dense baseball size ball with a hole in it that allows you to thread appropriate sized rope through the ball and tied. I think I have about 3/8' anchor rope. It winds up great on a one of those orange reels made for electrical cord. Once at rig throw ball over a pipe or whatever on the rig, while the rope and ball are dangling grab it with one of those aluminum pole extensions with a hook and cleat your rope off once you have it in hand. Makes for easy release once you are ready to leave the rig. I've used EZ hook type rig hooks before and I feel the above mentioned technique works better for me.

August 24, 2013 at 1:27pm
A comment titled: Vibrio in response to a report titled: ANOTHER GRAND ILSE VIBRIO VICTIM

Glad your cousin is doing better. Hope everything turns out fine for him. I agree with other posts, this is not just a Grand Isle thing. Vibrio can be in any saltwater environment. Warm, stagnant water is a big culprit. My thought is that stagnant water is a bigger factor than the warm water. With no fresh influx of fresh water it gives the bacteria time to accumulate in a certain area.
I also have been told that spraying a cut that was incurred in saltwater with 50% Clorox is more effective than antibacterial hand cleanser products. Always have a spray bottle of diluted Clorox in your boat or have access to some nearby is highly recommended

Wildwood resort around the San Miguel area is nice. They have their own boat launch, covered pavilion to fish from, fish cleaning area, etc

August 02, 2013 at 5:40am
A comment titled: TIRES in response to a report titled: Trailer Tire wear issues

Try to decrease as much weight in your boat when trailering. Put your fish chest, tackle box, beer chest, etc. in the back of your truck when going down the road. This helps to keep your axle from bowing, which causes the outside of your tires to wear out first. After you try new tires and decreasing your weight you may have to go to a trailer place to get a heavier duty axle so that it can tolerate more weight

July 23, 2013 at 5:31am
A comment titled: F-glass repair in response to a report titled: looking for good fiberglass repair

X2 on using Lyle with A plus fiberglass repair. Best in Laffy

Pretty sure that's a freshwater prawn. They've been known to occasionally be caught in brackish water here in Louisiana. Google pics of freshwater prawn and see for yourself

June 07, 2013 at 5:11pm
A comment titled: oyster shell in response to a report titled: Island Hammers

Please be very careful with your injured hand. Make sure you rinse your hand off well with a diluted concentration of clorox and water (50/50). Keep it clean thereafter. Vibrio virus infection can be very bad and dirty oyster shells might be a place this virus is lurking

Use whatever combo of tasso/sausage, cooking time, soaking your beans,etc. that will appeal to you that have been posted already. One more thing you can do is add 1/2 to a stick of butter in the pot (depending on the amt you're cooking) and this will bring the whole dish up another notch--this works great for red beans too BTW.

February 15, 2013 at 2:34pm
A comment titled: Ice chest in response to a report titled: Pelican Cooler vs. Igloo Yukon cooler

I have a 50 quart Yukon. Very well made ice chest and keeps ice very well, but only been having it approx 3 months. I have a 24 qt Yeti Roadie that is also well made and also holds ice well. No nothing about Pelican. I would lean more toward a Yukon because it is just as well made as a Yeti and is more reasonably priced albeit still expensive. Both are heavy ice chests even when empty so be forewarned that if you get one bigger than a 50 qt. you'll probably need 2 people to lift it once it's loaded down with drinks and ice.

You will catch well with chicken quarters but if you have crab traps that can be left overnight, any type of fish will do better than chicken such as shad, poggies, cut up mullet, etc.

February 06, 2013 at 11:14am
A comment titled: Strange things in a duckblind in response to a report titled: What is the Strangest thing you have seen while Duck Hunting?

One time while hunting in the marsh in GC an event happened that scared the u no what out of us. We arrived at the blind way too early. Our blind was an elevated blind above the water and the pond we hunted had many alligators. 3 of us were sitting on the bench in the blind waiting for daylight and all of a sudden my son (25 yr old at the time) let out a blood curdling scream like Wooooooooo!!! and all kind of commotion and noise was going on at his end of the blind. Well I love my son to death but once he made this noise it was every man for himself. My buddy and I must have set an Olympic record for the time it took to go from sitting down to jumping up to a standing position onto the bench. Once things settled down we found out a marsh hen had flown right into my son's lap while he was sitting in the blind. We all had a good laugh about it after but we were all scared sh@#less for awhile.

gaseous has not filled this section yet.