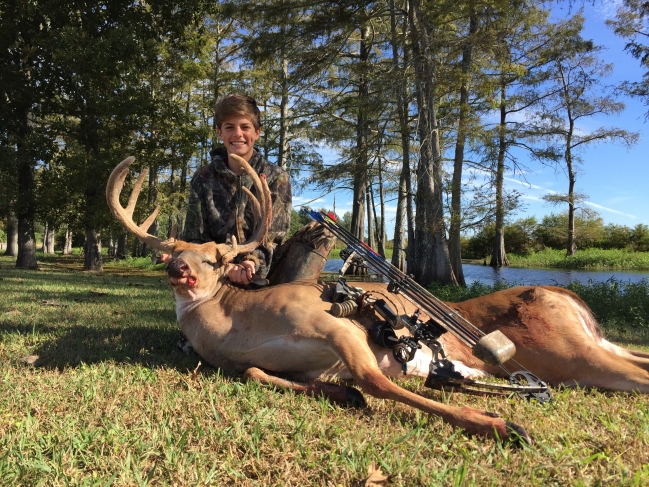 My name is Drew Landry and I am 14 years old. This is the story about my incredible bow hunt. I got my first Mathews mission craze bow when I was 11. I have killed many deer since then. My dad and I hunt on a piece of property located in Bordelonville, Louisiana. We decided to go put up a stand in the same spot that I killed my first deer out of. We got there and saw lots of deer signs. I found some big buck poo, and saw a honey locust tree dropping some beans. I went back to the camp, and went dove hunting. After I shot a few doves, I left the field early and headed back to the camp because I could not wait to go hunt this spot. I got to the lock on, and before I knew it two spikes and a doe came in. The doe did not come in range so I got pretty upset, but I still had hope there was more. A doe came in and started feeding on a honey locust tree behind me. I drew back and let the arrow go, and missed her. At this point I was very frustrated with myself, knowing that you donât always have ample opportunities when bowhunting. Not even 30 minutes later, I see the biggest buck I have ever seen in my life. He was feeding on briars about 40 yards away. He started to leave, then all of a sudden he started walking straight towards me. He was just a tank. He started feeding, and got broadside. I was taking deep breathes so I didnât fall off my stand from shaking so much. I drew back and shot him in the spine. He dropped to ground and started crawling away, and I got another arrow. I shot at it again as it was crawling away, and missed it. I had one more arrow in my quiver, and I shot my last arrow in the buckâs shoulder. It stopped only 30 yards away and was just laying there, and could not move his back legs. I called my dad immediately and told him what I just did. He made his way over thinking that I just shot a tiny buck. He came to my stand, and I told him it was bedded down and was about to die. It had been 25 minutes since I shot him. I got down from my stand and found the arrow that I missed the doe on earlier. My dad and I found him alive and I finished him off with an arrow. He died not even 10 seconds later. My dad said this is a bigger buck than anything he has ever killed. We got the four wheeler to the deer. My dad and I could barely put the tank on it. We hoped he wouldnât fall off cause we had already used all our energy to load it. We made it to the truck and loaded him up. It was just sinking in on how I just killed probably the biggest deer I will ever kill. 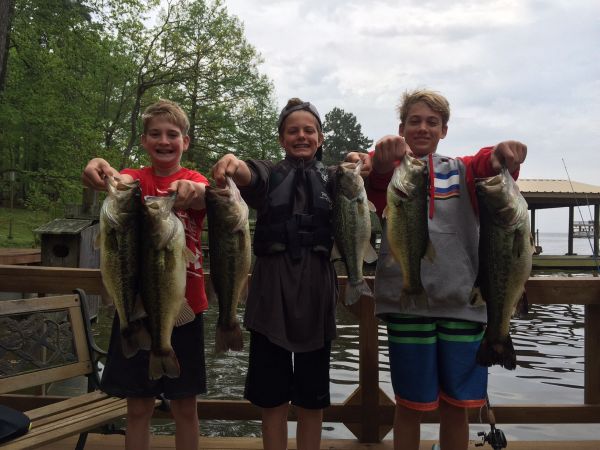 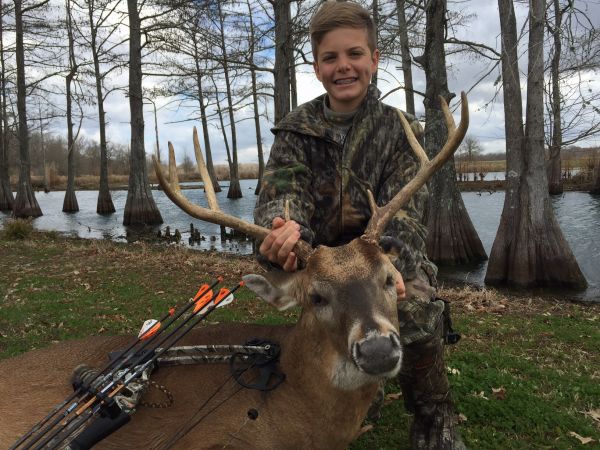 maddielou has not filled this section yet.