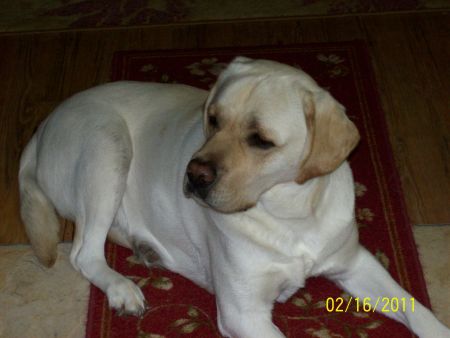 unpleasnant as well in response to a report titled:  Bad experience at Dockside

thinking about making a trip to delacroix on sunday. what do you guys think about the weather and whether it would be worth it or not. its a long trip from baton rouge. thanks

Can anyone give me an approximate weight of a 1983 wellcraft with a 200 h.p. evinrude(year 2000)
i would like to know if my truck(F150 FX4)will have a problem with the steeper ramps at delacroix, hopedale, and some other places.

Pros or Cons
Like to hear any info, good or bad about recharble
filet knives.Best brands, etc.
thanks

Can anyone give some info on the condition of the launch on the west side(laplace side) of the spillway.
thanks in advance
JR

Just letting any of you folks that knew Capt. Monroe Meyers that he passed away this morning.
He had been fighting cancer for over a year.
I will follow up with more info on the services when I have finalized them. I have known Monroe for close to 30 yrs. and he was a very dear friend. I know that there are many more of you guys that knew him also, and I just don't have the ability to contact each of you personally. Thanks for your prayers.

Just wanted to let any of you guys that knew Capt.Monroe Meyers, that he passed away eary this morning at home. He had been fighting with cancer for over a year. I will follow up with info for the services after they are finalized.

Just wanted to let some of you folks who have had the honor of knowing Capt. Monroe Meyers that he has passed away early this morning after fighting with cancer for over a year. Capt. Monroe was a very dear friend of mine for almost 30 yrs. I will follow up with more info. about the services after the arrangements have been finalized.

i am cleaning out the freezer, the wife says the ducks that i have for training the dog have to go.
if any one is interested i have have several fully feathered birds.have to go before the garbage man comes on monday. 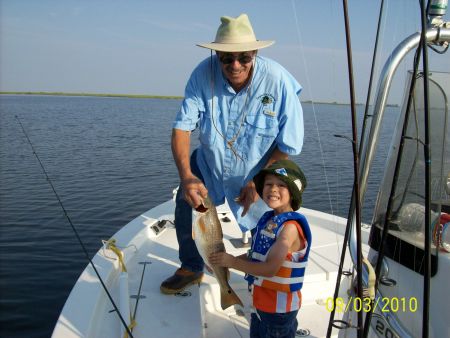 Fri sept 3 had the wonderful opportunity to fish with my and grandson for the first time as they have been overseas. first time fishing for the little one with his dad. didnt do much but had a great time watching t-boy catching a few small fish and then latching on to a 22' red. end of day
1 red
1 head
1 croaker
1 tired little boy

doesnt get any better than this. wont see them again til spring

Havent seen any reports about Lake P or the Rigolets.I am planning on a trip Friday, any info would be good. Does Dockside have live shrimp?
Thanks in advance JR.

got company in from canada. would like to take them for a boat ride, close to catch a couple reds and maybe a few trout.
any suggestions. just want to put some fish on the grill for them but not travelling all day to do it.any help is appreciated.

would like to know if anyone has any info on night fishing lake pont. and lake maurepas. are the any rigs with lights, how about the causeway or hwy 11 twin span areas manchac pass etc.? got some new lights for my boat and want to try them out.

March 25, 2010 at 5:24pm
A comment titled: unpleasnant as well in response to a report titled: Bad experience at Dockside

hate to add anymore to this but the wife and i have taken our 200.00 a trip elsewhere as well. when you drive from baton rouge to fish, 10 minutes futher doesnt matter, but dealing with pleasnt people at 5 am in the morning does. we are in our mid 60's and make a couple trips a week, but we will not go there anymore.....

The wife and I are planning on it.Was wondering though how this front is gonna change things from this past week.

nightfisher thanks for all the info today, you can count us in. thanks again.

September 22, 2011 at 5:30pm
A comment titled: white boots in response to a report titled: Crabbin

it wasnt meant to be ugly, it was the way you worded it and no offense to you but i see the litter all to often that some people just dont care about our water in la. like i saisd, no offense. i'm sure most of our fellow readers respect mother nature and what she is giving us to use.

September 20, 2011 at 7:26pm
A comment titled: maninwhite boots in response to a report titled: Crabbin

how is the crabbing on the west side of the lakesince the spillwayopening/closing? i would like to take the kids this wknd as well,we been goin to bayou bienvenue and would like to cut the mileage down

what type of blade are you using on that thing,metal wood or a demo blade?

July 16, 2011 at 9:43am
A comment titled: tigerfisherman23 in response to a report titled: crabbing around walker

were you between the twin spans and salt bayou wading from the shore?
thanks

There will be a mass at St. Phillip church on Kawanne St. off Powers Blvd. at 7:15 on Thurs.
May 5 for all that are interested.

allison,
youre right why dont we kill this subject and get back to the 'INSHORE FISHING REPORTS'????????
How about it fellows???

thats why i sent you a private email, so as not to
create any embarassment to you

i have doing some research on these also. found a video on the texas fishing forum comparing the talon and the power pole. up until i saw the video i was almost sure of it. also i think that there is a capt. in this group that bought one and another member made a post about his purchase. i would hope that they would give us their input.

February 15, 2011 at 9:33pm
A comment titled: yamaha in response to a report titled: Yamaha Outboard Service

i have used cabellas and also ascension marine in prairievll

how many teams participated on sundat?

got something i built with pvc pipe and fittings. serves as pushpole as well as stick pole.shoot me an email and i send some pics.

November 21, 2010 at 8:45am
A comment titled: tourney in response to a report titled: lasportsman.com fishing tournament

what is the entrance fee, and are you required to launch at that marina?

you're absolutely right. three generations on the the boat. had his daddy with me when he was only four. that was thirty years ago. i have two othergransons and they arent quite ready yet.

what part new mex? my wife is from albequ.
we live in the baton rouge area.

native of la. fished and hunted out of delacroix for many years. off on fridays and would like to find a responsble pardner to fish with on fridays.i would like to learn some different areas to fish. wife loves to fish also.