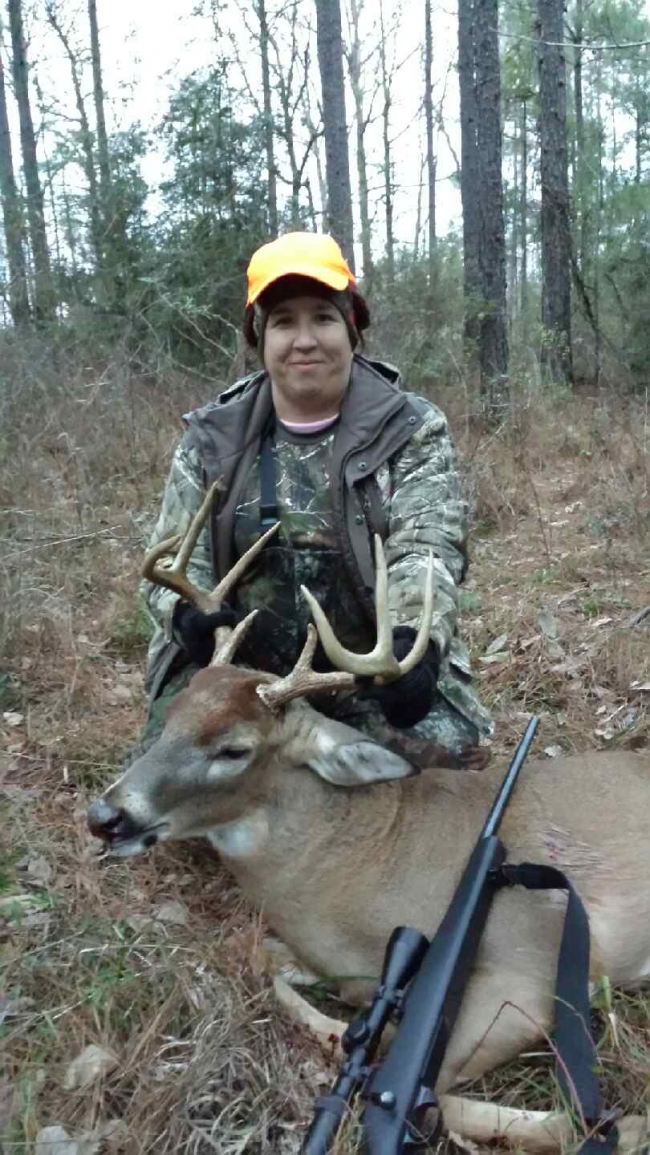 Well finally after 8 years of not hunting, I decided I would go a hunt with my husband on 12/31/15. We parked the truck and loaded up on our rhino at around 3:00 in the afternoon. On the way to the stand we hit a mud hole and the back wheel feel off, I though ok now we are stranded. Just then a buddy of ours came by and brought my husband back to his truck to grab some tools. After digging 2 holes in the mud with a machete, robbing one lug nut from the other 3 wheels, and little over an hour later the tire is back on the rhino. Now that my husband is soaking wet and mudding I figured that it was just not meant for me to go hunting so I said lets just limp the rhino back to the truck and go to the camp. To my surprise he said we are going to the stand it is now around 4:10pm. We get set in the stand we call the 4-way tripod stand around 4:30. As I am keeping an eye on 2 of the lanes, my husband is watching the other 2, we both see something about 120 yards to the left of me and the right of him. My husband looks through the binoculars and tells me to get my gun ready. He tells me to shoot, so I slowly pull up my gun to look and aim for a shot on the animal. I get set and pull the trigger at 4:50pm and the deer darts off into the woods, all this time my husband is looking through the binoculars so I asked him if I made a good shot. He said he did not see, so we sit and wait. He then proceeds to tell me that it was a big deer. Now my nerves are off the chart and my husband has to keep telling me to calm down. As we are waiting I hear something crash in the same direction that the buck ran. By now it is 5:10pm and we climb down the stand to go look, and we get to the spot where the deer was standing, we see blood, bright red blood with lungs. We track the blood about 10 yards into the woods and can not find anymore blood, my husband is confident that I killed this deer so he says stay here I know where he is. He goes 20 more yards in the woods and found where he collided with a tree. We have found my beast of an 8 point. He weighted 179lbs one of the largest deer killed on our least this season. Now after our misshapes at the start of our hunt I was able to bag this 8 point buck and to top it off this is my first deer

dav1221 has not filled this section yet.