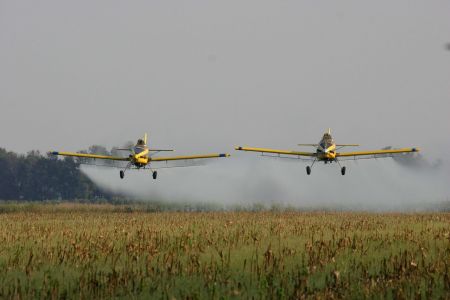 Question of the day. Lets say five guys are on a offshore charter trip and everything went ok. What would b considered a ball park tip for all five guys on this trip. Four of them have never been before and don't want to give to little of a tip but also not look like high rollers either. Thanks.

Somebody on this site made me a card for my gps and now my buddy wants a card. He has a hook 7. Does anyone know where he can find one? he fishes south la around leeville area. Thanks for the help.

Headed down to try the fishing Sunday and Monday out of Leeville area. I have not been all year, so anyone Else going? Is it the best to try the beach and the bay or stay inside for some reds? 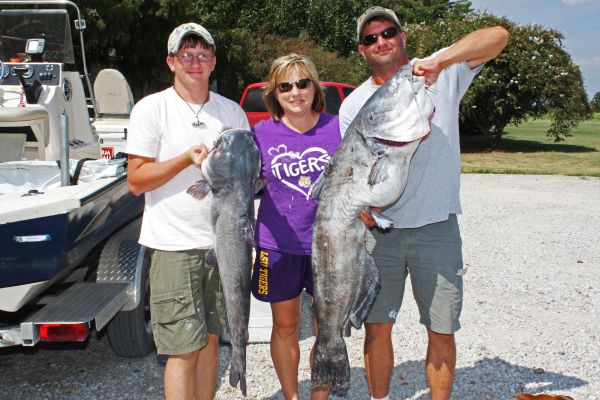 Took the family out to the miss. river to do some cat fishing with rod and reels.My wife caught the biggest of the day that weighed in at 61 lbs. My caught one at 28 lbs. We ended up with 11 fish on rod and reels this morning.Fall is in the air. What a great way to spend a day with the family.

Headed down to leeville/fourchon this weekend to try the fish.I know the tide range is not great but this the only time i can come down to fish. Anybody have any reports or input on what it going on.The last time i was down the fish seemed to b on the beech and the islands.Anybody else going? 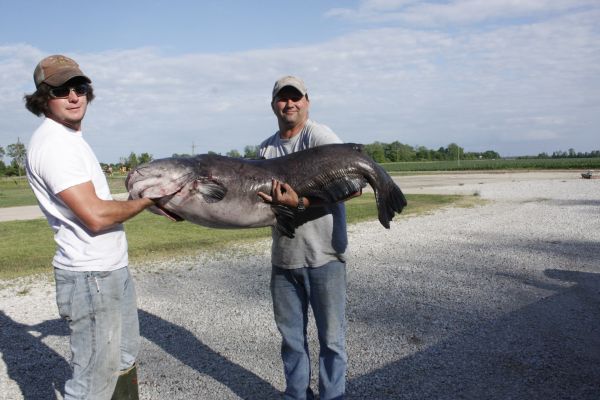 Ok call me dumb but just found out the state record appears to be 110 lbs for a blue cat. I caught this one with my friend Jason on a trot line. We weighed it on a pair of deer scales (Not official) but it was 115lbs. Just found out today I might have gave away the state record to my friend to eat. He was caught in the back water of the miss. river.Just my luck never thought it might b a state record 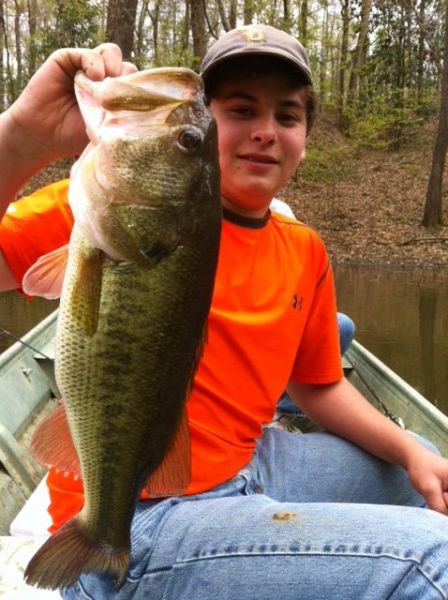 Went fishing with boys and say they did very good.White perch where up close to the bank spawing.They also tried the bass and did very good with them to. The smiles say it all!! 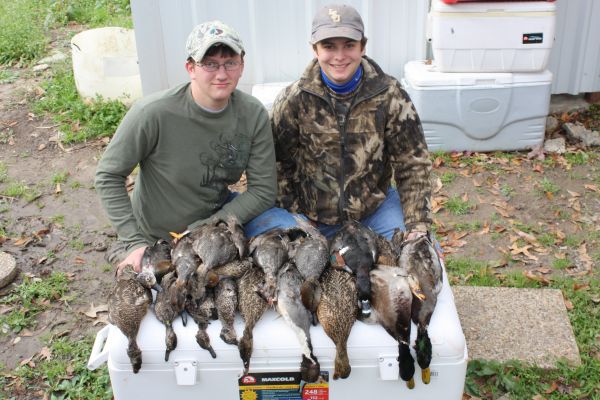 Went duck hunting this morning.Its my son's birthday 16Th. He wanted to go duck hunting and he brought his friend Adam with him.Ended up with 18 ducks total.It was not as like the other trips but still beats being at the house. 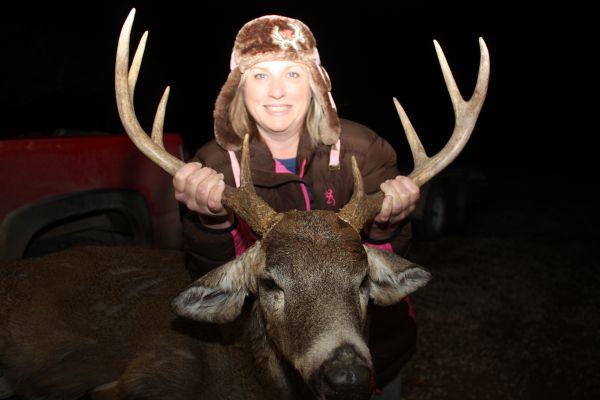 My wife killed this buck 20 inches inside and 21 main beams and 230lbs.Its her biggest so far. 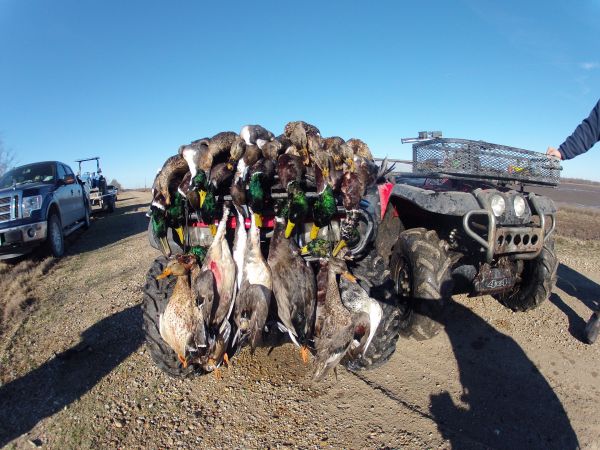 Ducking in north la.We killed a five man limit 30.We where done with the mallards at 8:00>Then shot pintails to finish up limits.Waiting on you Brent 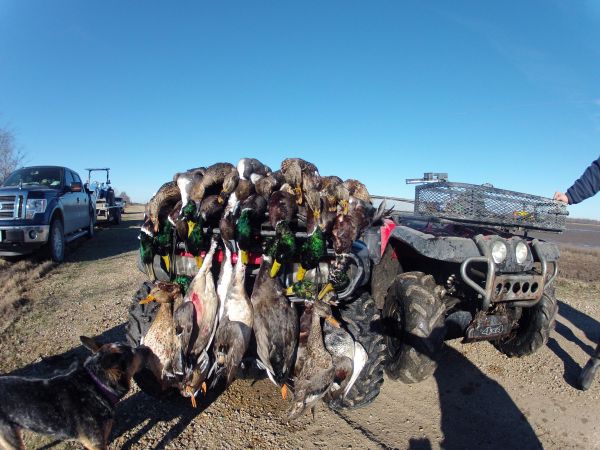 This is for you Brent!! 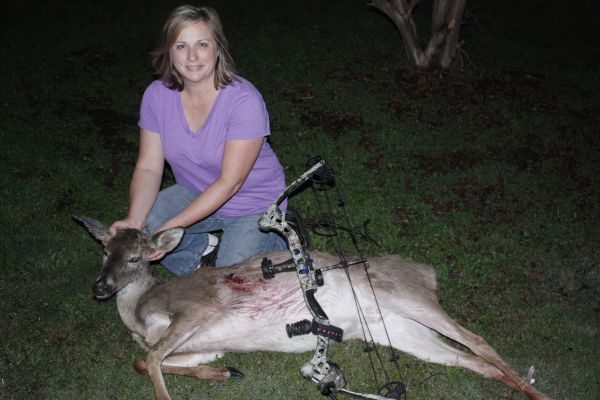 Had a great day today! My wife got her first bow kill ever.A 130lb doe was the choice for her.Then my son killed a nice ten point 17.5 inside and 21.5 main beams and weighed in at 263Lbs.Great time with the family. 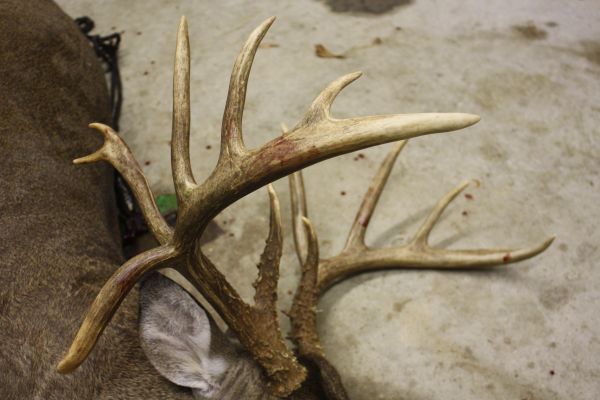 Went fishing this past weekend with a GREAT group of guys at camp bubbles.We had a great time and caught white trout and specks.The second day found the reds in the shallow ponds.Thanks for the wonderful time!! Just got done with the food plots and put up a new box stand!Maybe someone from camp bubbles will use it!
Sorry no pictures my internet keeps kicking me off!

Thanks everyone!! Drove five hours and fish sat. And water pump went out.Still caught four reds and few trout.Sunday fished with my brother in his boat and found few trout and alot of white trout!! Still had fun fishing! I owe on one landon thanks for the infor.Will try again in oct. my wife caught her first four reds so it was worth every penny. Thanks guys for the infor. 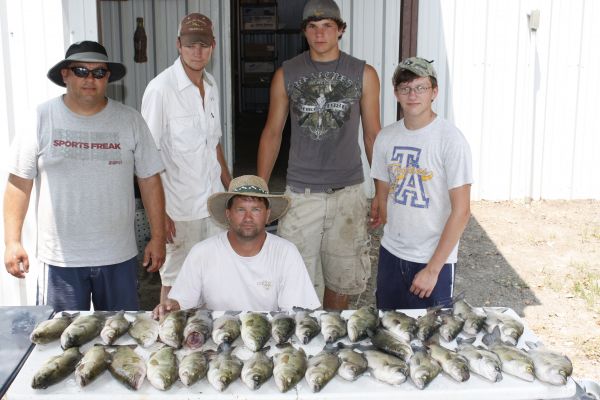 bass fishing in the miss. river. NO storm warning!! 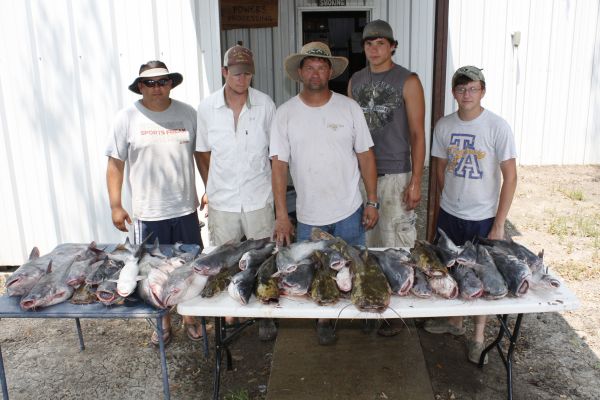 Caught these this weekend with a great bunch people! Bass and catfish! 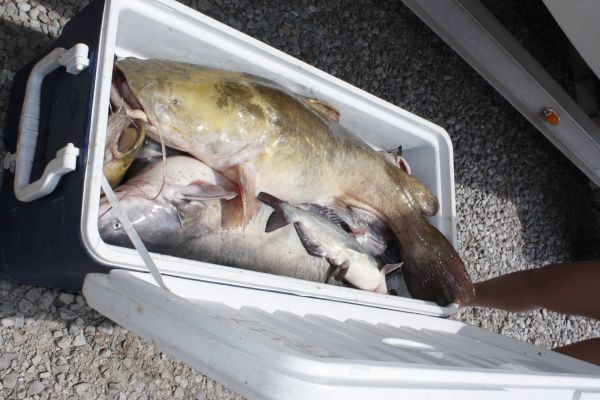 Caught this on live bream in the mississippi river. Had alot of blues and ops. 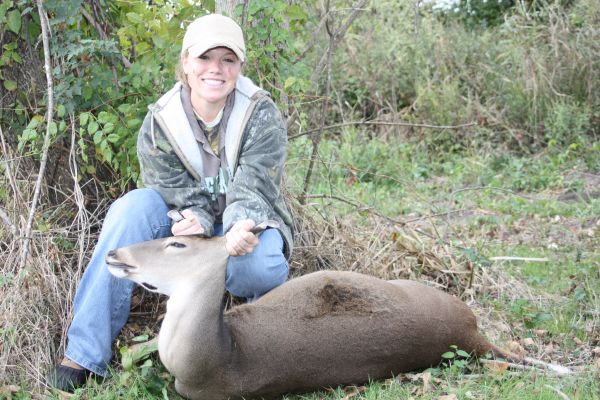 Pink Power! Took my cousin bow hunting this weekend and look what she did! This was her first ever deer hunt and she took a nice doe with a bow. I think we have another member of the bow hunting.Will try for horns next time. You have to start somewhere and this was a good start. 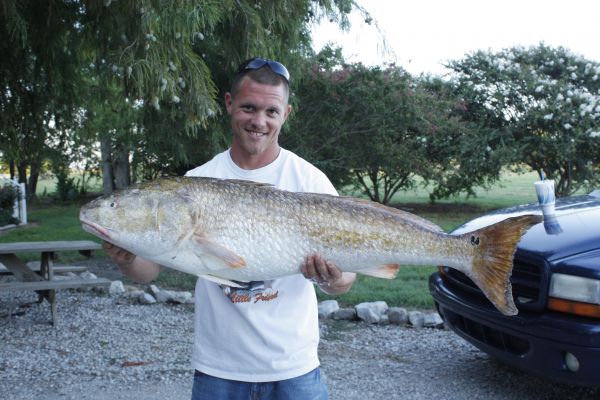 Fished out of fourchon this weekend with not much luck but found some nice bull reds. The largest was 39lbs!

I am a pilot and mechanic on planes. That reading that this plane is not certified faa safe means that the aircraft is in the experimental class aircraft. This is very common in aerobatic aircraft. This allows the planes to be modified to make them perform better. They do still have to be inspected and be airworthy. Very sad that this happened. I never met him before and all ways wanted to make a trip with him because me and my wife fly everywhere.

I have one on a 22 ft Kenner and I love it. Itâs a life saver when the family wants to rest while you make that last cast. Lol or just more cast all day

Thanks thatâs close to what we thought.

Its been that way for us several times this year. The beach bite was on one day and off the next four days. Very uncommon for this time of the year.

good luck we decided not to go this weekend because of the weather forecast. Let us know how you do.

i was at fouchon and same results as you but got three trout all weekend. The south west wind killed the bite. It sucks when you travel five hours to fish and bamm the water is muddy everywhere. I quess thats fishing.

Thanks he will give you a call

Yep trolling motor plugs are pain. Glad you got it fixed

What better way to spend time with your son. That's a deer of a lifetime. Very good deer!!

The tensas is closed to everything during the deer hunt. Don't get caught doing that!! That's federal both ways. There is some duck.hunting on the tensas on the mclemore unit.

I live here by the tensas. You might want to check weather. 32 degrees here on Tuesday. Rattle snakes where out here bad about three weeks ago. U will b fine. It's colder this year yearly.

Keep the reports coming.They are very helpful and as always very good to read.Even if we do not fish the area that you do.They are still very good information.

fish that size are ok to eat but the 10lb to 20lb seems to b the best eating size for me. If you clean all the red meat of and just have good clean white meat its good. My set up is a 3 to 4 oz weight and two 5/0 hooks. I use 200lb mono to make my leaders with. Like you do for offshore fishing. Find where it goes from 20 ft to about 60 or 70 feet and fish the area around 30 to 45 feet deep. With the river low as it is now.You have to look for some deep holes.They have not been in the deepest parts but on drop off about 40ft deep.

September 22, 2013 at 7:24pm
A comment titled: Fish in response to a report titled: Catfishing

We fish out of tallulah la. Across from Vicksburg ms. Come up one weekend and we can try. Caught one early this year weighed in at 115 but on trot lines. Deep holes are the ticket right now

September 18, 2013 at 5:01pm
A comment titled: Thanks in response to a report titled: Catfishing

Thanks guys! She was very happy happy!!Squid i live about a mile from the river and i fish it all the time. We can make that happen for sure. We sometimes run trot lines and noodles.Then pole fish during the day time. I have a 22ft center console that we use in the river so it is very safe and a lot of run. Jls it was 57 sat morn up here.

Squid let me know how things end up. Very cool in north la this morn. 67 degrees going to put wifes bow stand up as per commands. Kinda like stopping to eat catfish! My relief pilot is on a elk hunting but when gets back its time for me to come down and fish. Installing hydro. steering on my center console right now. Will have to use that as an reason to come down.
Happiness is bent fishing pole!

September 14, 2013 at 8:33am
A comment titled: To many motors in response to a report titled: How many motors needed

I can't keep one running but 8 that's unreal. I would agree controls on that has to b a pain

September 02, 2013 at 5:06pm
A comment titled: Almost time in response to a report titled: Leeville Report

Well as normal good job squid.Its almost September but wait it is!Work is slowing down in a week or two might get to make a trip down.Its been way to long for me.Catfishing the miss. river has worn off the fun.Its time for a change.The wife even wants to make a trip.Something must b in the air.Great report squid and as always love to here whats going on down there.

September 02, 2013 at 5:03pm
A comment titled: squid in response to a report titled: Fishing fourchon this coming weekend Aug1-3

Well it want b any left if squid makes it there first!! Good luck squid. Work has me right now but sept. is looking real good.Can not wait to get back down there!! Happy is a bent pole!!

I fly airplanes for living. Enjoy hunting and fishing.